Alexandra Park air field was an airfield 265 kilometers northwest of London.
The airfield was built by the War Department, and opened in May 1918. It was intended for the assembly, test flying and delivery of aircraft for the RAF built in the Manchester area by A.V.Roe & Company (Avro) at Newton Heath and National Aircraft Factory No.2 (NAF No.2) at Heaton Chapel. On 1 May 1919, the first day of civil flying after the First World War, LtCol Sholto Douglas arrived from Cricklewood Aerodrome London, at the controls of a Handley Page 0/400 converted bomber of Handley Page Transport. It carried ten passengers in its windowless fuselage and had taken 3 hours 40 minutes to get from London. The Avro Transport Company operated the UK's first scheduled domestic air service from Alexandra Park via Birkdale Sands (Southport) to South Shore (Blackpool) between 24 May and 30 September 1919. Tickets cost 9 guineas return or 5 guineas one-way, equivalent to about £324 and £180 respectively today.
Between 1922 and 1924, Daimler Airway operated daily scheduled passenger flights from the aerodrome to Croydon Airport. The service was later followed by a regular extension to Schiphol Airport near Amsterdam. When Daimler merged with other airlines to form Imperial Airways in April 1924, the new monopoly airline terminated the service. Aircraft competing in the King's Cup Race air races landed here in 1922 and 1923. A number of airshows were also held at the airfield. The Lancashire Aero Club, the oldest flying club in Britain, was formed at and operated from Alexandra Park until 1924, when it moved to Woodford Aerodrome.

Photograph of the aerodrome in 1923 looking west over the two sets of large triple Belfast Truss hangars (Wikipedia). The terms of the land lease, laid down by Maurice Egerton, Baron Egerton of Tatton, stipulated that flying from the site would cease within five years of the war's end. As a result, the hangars and ancillary buildings were demolished and the aerodrome closed on 24 August 1924. In any event, the site would have been unable to cope with the increasing size and weight of airliners by the mid-1930s.

Today, parts of the grass airfield are still open terrain. They are occupied by 24 football (soccer) fields and 3 rugby fields. Flying still takes place on the site of the airfield with Hough End Model Aircraft Club keeping the spirit of aviation alive. The Greater Manchester Police helicopter uses the pitches at the Sports and Social Club as a landing spot from time to time. 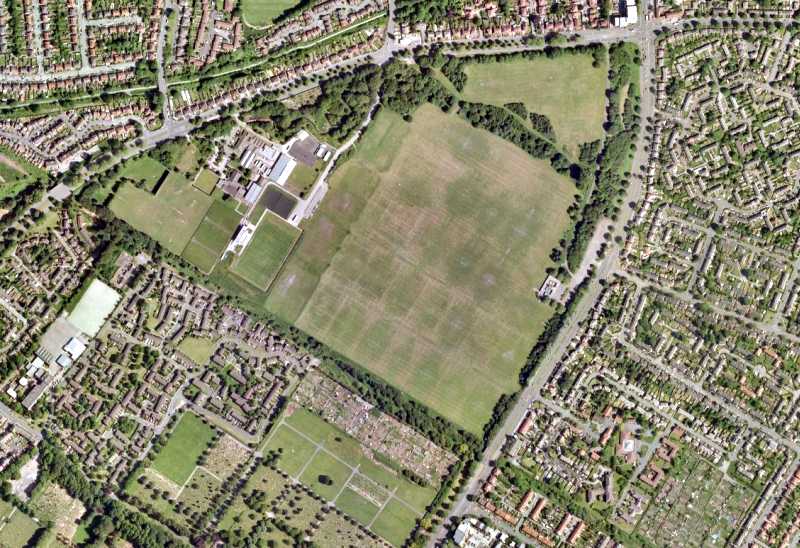