42°34'31"N 009°27'10"E
Runway 13/31 1380mX35m PSP
Runway ../.. 1000mX70m compacted earth
Borgo airfield (french: aérodrome de Bastia-Borgo) was an airfield on the northeast side of Corsica.
It was built by the French State to address the need for a maritime airfield on 122 hectares of lands that the state had acquired between 1926 and 1930 on the territory of the town of Borgo.
No flying units were based on the site, as it was believed in 1935 that the management of the platform would be better off with the Potez Company - Aero Service, who were interested in this arrangement because of their plan to open a route between Nice and Bastia.
The conditions to which the authorities concerned were to agree, however, did not allow an agreement to be signed with Potez company.
Thanks to the blissful ignorance of the Air Ministry and the remoteness of local services, a fully operational aerodrome was not set up and it remained a single airstrip until its dissolution in 1937.
During the occupation, the Germans occupied and used Borgo. During their stay at the field, they also completely dismantled the railway tracks along the east part of the land to recover steel for their industry.
When the US arrived at the island, they deemed the runway was too small and built a larger one slightly to the north, more suited to their planes and with a different orientation. However, the old runway was still used for Piper Cubs. Combined, they became part of the large "USS Corsica" airfield complex. 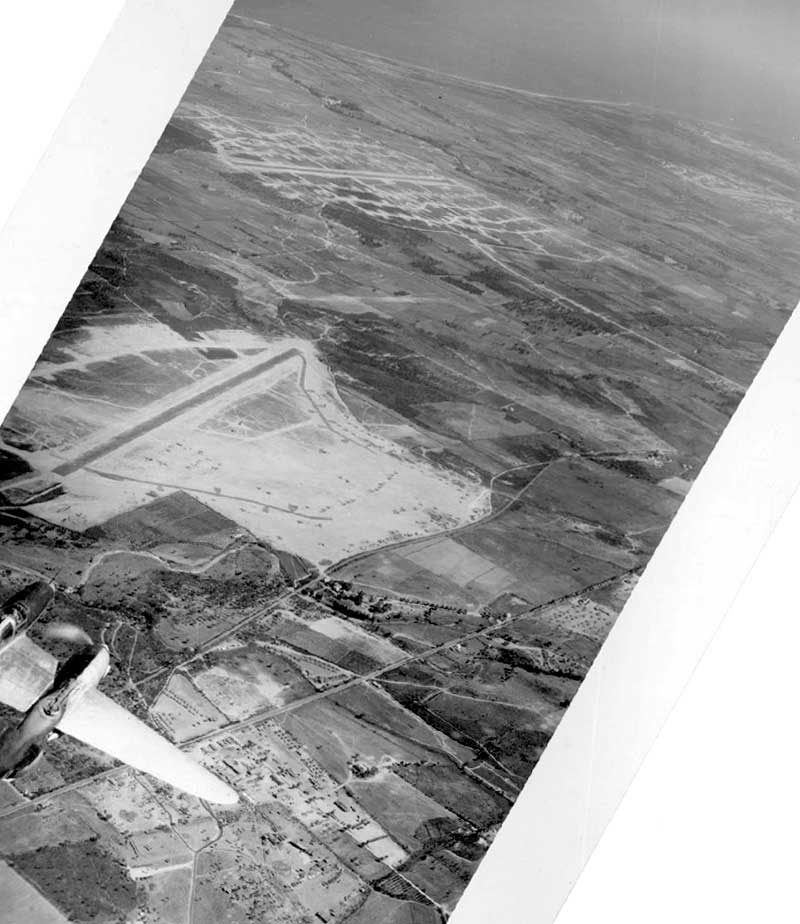 Photo looking south taken in early 1944, with in the foreground a Lightning P38. The first airfield is Borgo, the second large airfield is Poretta (todays Bastia Poretta airport). Two more can be seen in the distance. Between the two nearest, a very small runway can be seen, which is the one created by the French and used by the Germans. This little track was used for Piper Cubs. US Groups based at Borgo were 52FG operating Spitfires, 111FG operating P-51 Mustangs and 415NFS operating Beaufighters. English pilots were operating at the field too, when 283 Sqn flew from here between December 1943 and April 1944. A French Group also operated from the airfield: GR 2/33 'Savoie' flew P-38 Lightnings and Spitfires (photo Dominique Taddeï via Mr Harry Oakley). 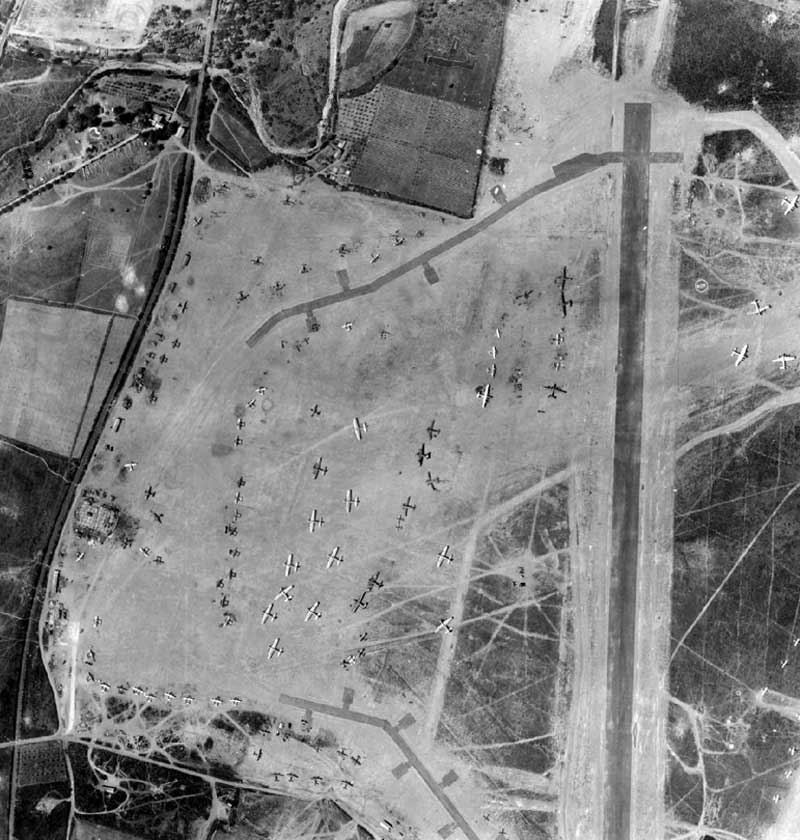 Aerial photo taken by a Lockheed F-5 23rd PRS in early August 1944, just before the Allied landings in Provence (southern France). Borgo is occupied by many different types of aircraft, including the Lockheed Lightning, Boeing B-17 and others. The runway is globally oriented 13/31, the visible threshold is the 13 threshold. The photo also clearly illustrates the land (and only land, because the Germans had stolen the rails to recover steel) of the railway line Ajaccio-Bastia on the right (photo Dominique Taddeïvia Mr Harry Oakley).

In April 1945 Borgo airfield was abandoned by the Americans. Only the parts still belonging to the French state remain an active drop zone for military parachutists from the base of Solenzara further south.

Historical map of Borgo airfield in September 1944 (USAAF, via AFHRC)

Borgo 1948. There is no longer any aeronautical activity. (Source: geoportail.fr) 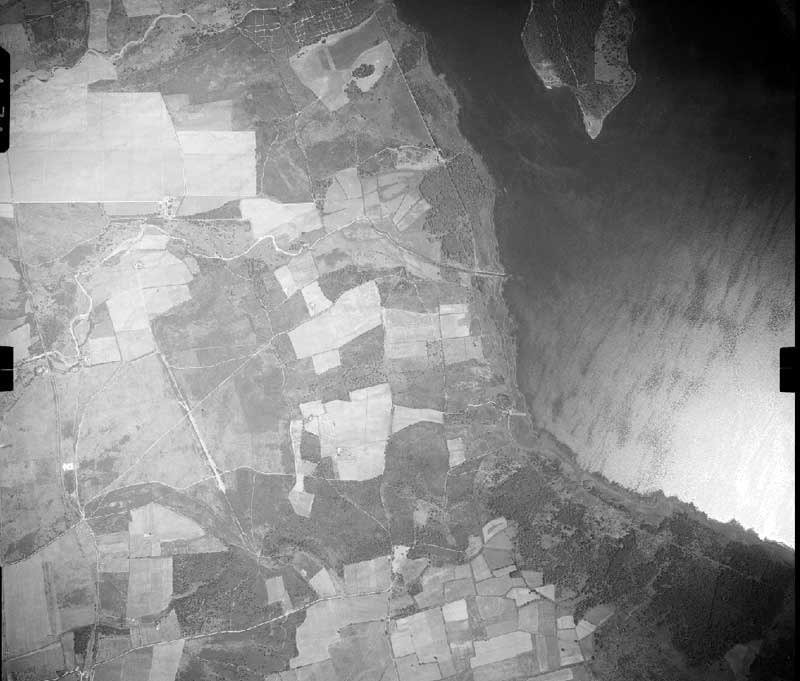 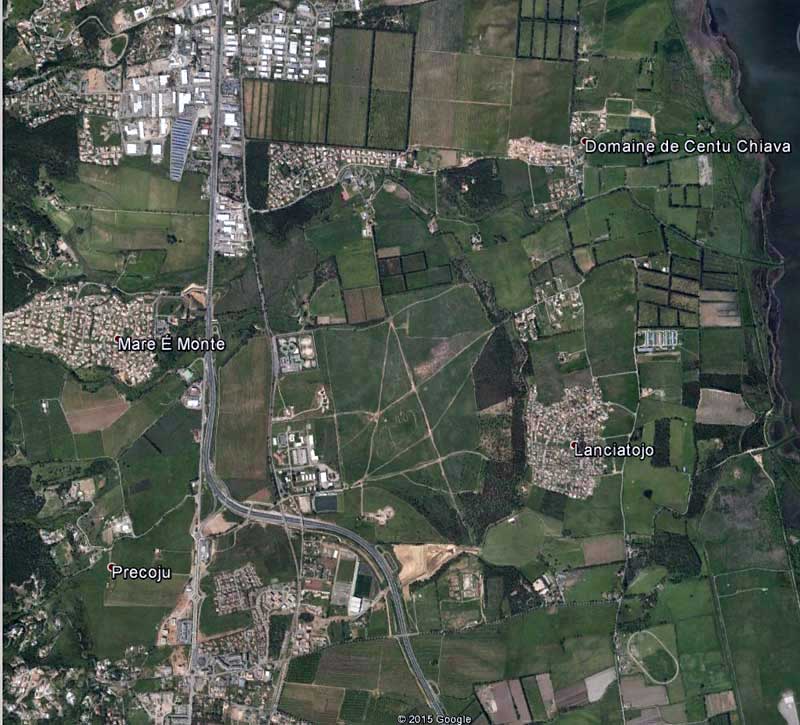 Borgo 2007. The ground traces reveal nothing of the presence of an airfield but imagine the location of the track.