Airfield Bergen (Dutch: Vliegveld Bergen - ICAO: n/a) was an air base close to the city of Alkmaar, north of Amsterdam.
The airfield was built in 1938 and used by the Luchtvaartafdeeling (LVA), the Netherlands Army Air Force, for their most potent aircraft, the Fokker G-1.
The airfield was attacked (rendering most G-1s unusable) and later captured by German forces on 10 May 1940.
The occupying forces quickly rebuilt the airfield and in July and August 1940 the airfield was used by III./JG54 'Grunherz' flying Bf109E.

Airfield Bergen on the eve of World War II, via Peter van Kaathoven

German soldiers pose in front of a Ju-52 on Bergen. The aircraft is parked on platform 2, with hangar 4 to the left, and behind the Junkers hangar 3 is visible (photo collection Nederlands Instituut voor Militaire Historie)

Platform 3 at Bergen (Hangars 6 and 5) with G.1s of 4 JaVA (4 Fighter Squadron), after the German attack. Visible are the wrecks of Fokker G.1 '331' and '310' near Hangar 6, behind it the wreck of '333'. The tires of '310' are flat and its right side propellor is removed (photo collection Nederlands Instituut voor Militaire Historie)

Fokker G.1 '321' was deliberately driven into a canal at the edge of Bergen on 10 May 1940 in an attempt to render it useless to the Germans (photo collection Nederlands Instituut voor Militaire Historie)

Some captured G.1s were repaired and painted with German Iron Crosses and Swastikas, such as these two examples at Bergen in the summer of 1940 (photo collection Nederlands Instituut voor Militaire Historie)

The Germans built new hangars and camouflaged them with netting and seasons coulouring. About 4 miles to the south a dummy airfield was constructed near Egmond Binnen. British and American bombers knew where to find the airfield nevertheless, and soon began bombing it. Around the airfield 4 bunker complexes were built, most of which can be seen to this day, especially the complexes around the road between Alkmaar and the Egmonds.
During the final days of the war, in May of 1945, the airfield was used as a dropzone for Operation Chowhound, the USAAF part of a joint RAF/USAAF effort between 29 April and 7 May to bring food to 3 million Dutchmen (including a child we've come to know as Audrey Hepburn) that were suffering a famine. Ten B-17 Bomb groups of the 3rd Air Division of the USAAAF flew 2200 missions to designated dropzones, sometimes flying as low as 400 feet. 2268 sorties were flown by USAAF, starting 1 May, delivering 4000 tons of food, including K-rations. Although they were not considered combat sorties by the British and American High Command, they were still dangerous.


Footage of B-17s flying low (around 400feet) over Holland in May 1945. It must have been a scary (albeit rewarding) mission for the crews, which were more used to their operational altitudes around 18.000feet. 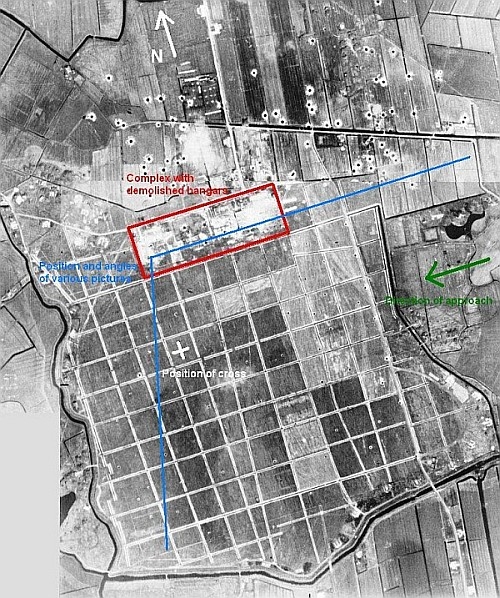 USAAF reconnaissance photo of Bergen Airfield in preparation for Operation Chowhound in May 1945. The field had been thoroughly plowed by the Germans to prevent its use by Allied aircraft (photo Hans Nauta, via 100thBG.com). 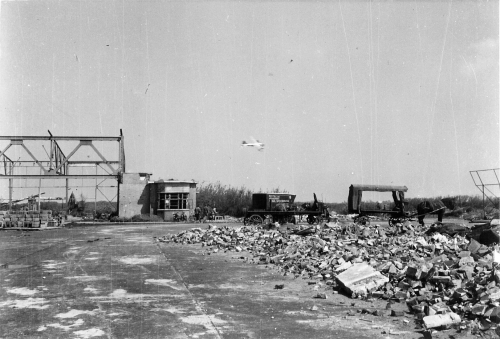 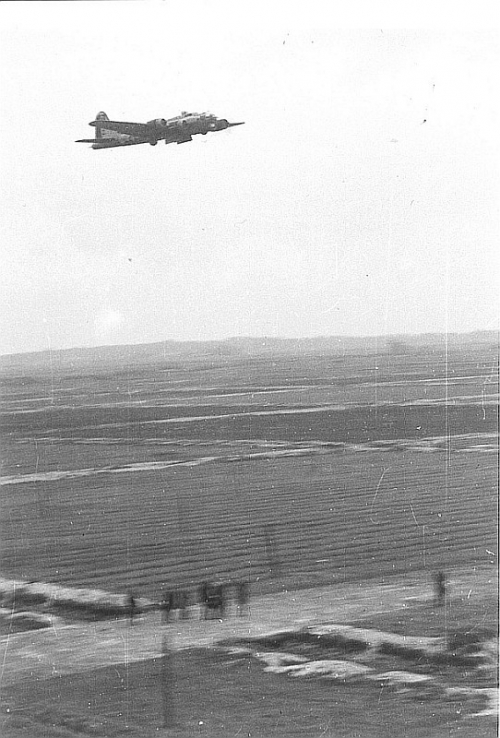 B-17s making a low pass over the bombed out airfield of Bergen in May 1944. The lead aircraft has its bomb doors open, food is about to fall down.  The 418th Squadron aircraft is 44-8616 LD-Z flown by the Arthur A. Leader crew (photo Hans Nauta, via 100thBG.com)

A crew of food collectors gather for lunch around a small truck in a hangar at the bombed out airfield of Bergen in May 1944. Because transportation was very scarce, collecting the food was a very labour intensive job. You can read more about the food drops here.

After the war the airfield was not rebuilt. It did however have a temporary airstrip, as travel by air was the only sure means of transport in the first months after the war. After about a year the airstrip fell into disuse and the platforms were used as a mobilisation complex by the Netherlands Army. Still in use in the summer of 2010, it was scheduled to be sold off.