Bircotes and Bawtry
runway:  N/S - 1408m/1540 yds - grass
runway:  E/W - 1399m/1530 yds - grass
runway: NW/SE  - 1234m/1350 yds -grass
Bircotes airfield ( also known as RAF Bawtry and RAF Bircotes) was an airfield 222 kilometers north of London.
It was built on a flat piece of farmland west of the town of Bawtry and opened in November 1941 as RAF Bawtry, a grass-surface airfield with three runways: N/S 1540 yards (1408 m), E/W 1530 yards (1399 m) and NW/SE 1350 yards (1234 m).  The landing area was surrounded by a concrete perimeter taxi track with thrity pan-type parkings. The three hangars were mixed types: a T2, a B1 and a Besseneau. Technical and living quarters sites were to the northwest of the airfield, providing accommodation for 844, RAF and WAAF combined, of all ranks. The station identification code was 'BR'.
Initially, the airfield was used by 25 OTU's Ansons, Wellingtons and Manchesters from RAF Finningly (todays Robin Hood Airport Doncaster Sheffield).
The station name was changed to RAF Bircotes in April 1942 to avoid confusion with the nearby home of the Headquarters of No. 1 Group, RAF Bomber Command, which was also named RAF Bawtry.  Bircotes was to host Bawtry's Communications Flight, which moved in from Hucknall in April 1941 for the duration of the war, with its mix of aircraft types. Although part of Maintenance Command, Bircotes was also the home to a number of training units during its life. The first of these was 25 OTU, who operated from 14th November 1941 to 7th January 1943.  During their stay, Bircotes was upgraded after being made a satellite for nearby RAF Finningly. Improvements included the addition of two Link Trainer buildings, two Ground Instructional buildings, blast shelters and a Crew Procedure Centre. The runways remained grass however.
Other occupants included
16FTS (February - August 1943)
18 OTU (March 1943 - Nov 1944)
28 OTU (June - July 1944)
During the latter stages of WW2, the airfield was also used by a number of Maintenance Units.
A new MU, No. 250, was formed at Bircotes and this was later absorbed by 61 MU, who used Bircotes as a sub-site to the Aircraft Equipment Depot,  Handforth, between 1944 - 1948.  The site was also used briefly as a sub-site for 25 MU at Haywood in the West Midlands.
The airfield closed after the departure of the last MU and was quickly returned to agriculture.  Most of the facilities were dismantled, the only remnant being the B1 hangar on the south of the airfield, alongside the A631.  This is now in private hands, serving as a storage depot. Parts of the perimeter taxi track and foundations of a hangar can still be recognised from aerial photography though.
After 1945, RAF Bawtry remained an RAF station as the Headquarters of 1 Group, Bomber Command. It continued in this role after the creation of RAF Strike Command (1968), until closure in 1986. It took part in co-ordinating the Black Buck operations by RAF Waddington Vulcan bombers on the Argentine-held Port Stanley Airport during the Falklands Crisis of 1982.
A small memorial plaque was dedicated in 1999 on the outside wall of one of the wartime annexes.
Bawtry Hall iself is now a private residential and conference centre but the location is still the home of 2008 Sqn Air Training Corps, whose cadets have their own meeting venue on-site. 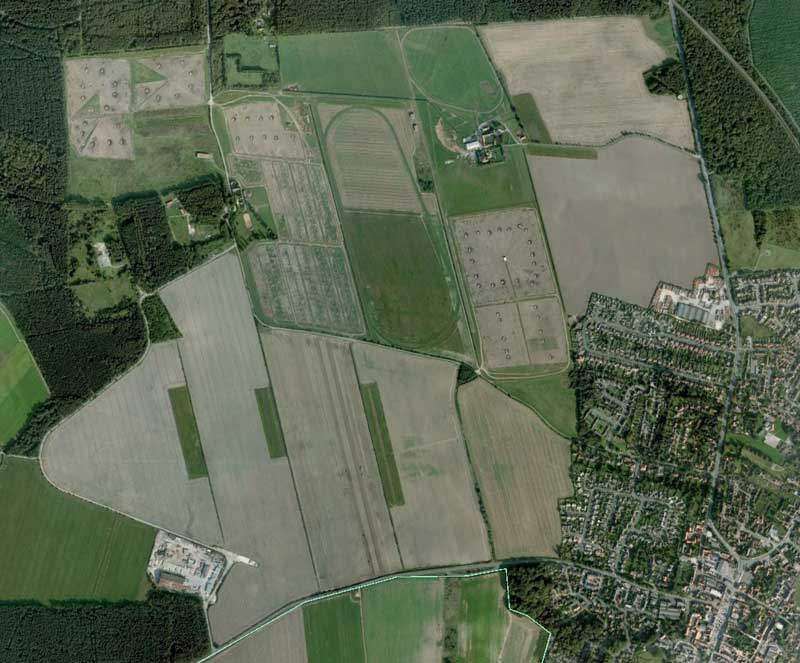 The perimeter track is still faintly recognisable on the west side of the airfield. RAF Bawtry was located in town, in the lower left corner of the photo )Google Earth).

Thanks to Rick Garside for correcting me on a very important detail on the Black Buck raids.
contact us about this airfield