Royal Air Force Station Brüggen, also known as RAF Brüggen (German: Fliegerhorst Brúggen, ICAO ETUR or EDUR before 1995) was one of four 'Clutch' air bases of the British air forces in Germany (RAF Germany) during the Cold War.
The base was named after the village of Brüggen, the nearest rail depot, but it is actually located next to the village of Elmpt. Construction began in mid-1952, and the station became active in 1953 during the rapid expansion of NATO forces in Europe. The initial strike capability at RAF Brüggen was provided by the English Electric Canberra B(I).6 of 213Sqn and Canberra PR.7 of 80Sqn from the summer of 1957. From 1969 to 1975 the Phantom FGR.2 (F-4M) of 31Sqn operated in the strike/attack role, which were replaced by the SEPECAT Jaguar GR.1 from 1975. Other squadrons flying the Jaguar were 14Sqn, 17Sqn and 20Sqn. 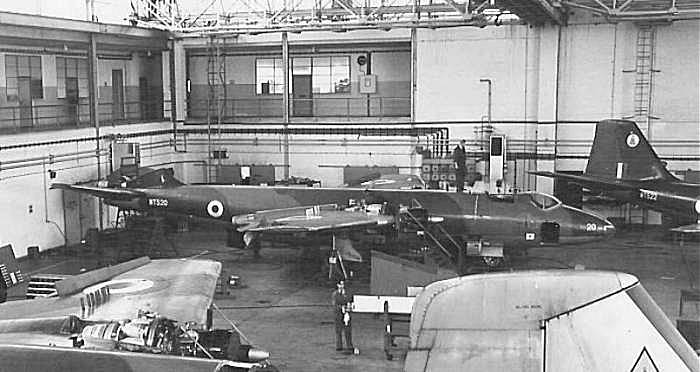 RAF Canberras undergoing maintenance in a hangar at RAF Brüggen

Panavia Tornado GR.1 began replacing the Jaguars from 1984 onwards. In addition to a Jaguar squadron (No. 20Sqn), RAF Brüggen housed at its height four Tornado GR1 squadrons (9Sqn, 14Sqn, 17Sqn and 31Sqn) and as its nearby sister airbase RAF Laarbruch housed a similar number, RAF Germany formed the largest Tornado force in NATO.
On 4 September 2007, the British military admitted that there had been an accident with a nuclear weapon at RAF Brüggen on 2 May 1984. The nuclear weapon (8 times more powerful than the bomb that was dropped on Hiroshima in 1945) fell from a transport truck, as the missile wasn't securely attached to the truck. The weapon was undamaged, but the six people/military staff who were responsible for the accident, received a reprimand for their actions in the incident.
During the Gulf War 3 Tornado squadrons (9, 14 and 31) deployed to the Middle East. Following the unification of Germany the number of RAFG Tornado squadrons was reduced by half. In 1996 the decision was made to gradually withdraw RAFG to the UK during the following years. While its sister squadrons took part in the air war over Kosovo in 1999, No. 17Sqn disbanded and thus began the gradual drawdown of the base. No. 14 Sqn relocated to RAF Lossiemouth (Scotland) in January 2001.
A formal ceremony on 15 June officially ended a continuous Royal Air Force presence in Germany since World War II. All of the remaining Tornados had left for RAF Marham by 4 September 2001 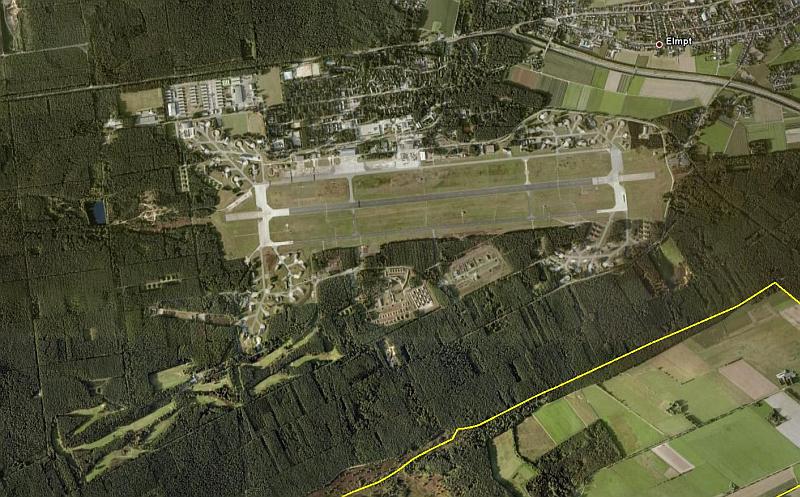 With the Royal Air Force having no use for site of the former RAF Brüggen, the base was handed over to the British Army on 28 February 2002 to become a Garrison. The air base is now known as Elmpt Station, Javelin Barracks. Until early 2009 12 Flight AAC, operating 4 Gazelle AH.1 helicopters was stationed at the base.

2017 - Aerial drone ride by the Youtube channel "Biennenvaart in beeld"