Airfield Brunswick-Broitzem (german: Fliegerhorst Braunsweig-Broitzem) was a military airfield in Brunswick, Northrhine-Westphalia, Germany.
It was opened in 1916 as a military airfield. On 1 April 1917 it became home to Operational Flying Unit (german: Fliegererstatzabteilung)7 out of Cologne. With the end of World War I flying also ended at the airfield, and parts were converted into gardens.
During first half of the 1920s the terrain saw little flying. That changed when in 1925 it became a stopover on Aero-Lloyds Bremen-Hannover-Leipzig route. In 1928 flying really took off when the airfield became home to the German airline pilot school, which moved in from Berlin-Staaken. To facilitate the pilot school extensive facilities were needed: The airfield was enlarged and many buildings were erected. The large three wing main building was one of the buildings built during this time. Construction was quick: from 1929 every pilot of Deutsche Lufthansa was trained here. 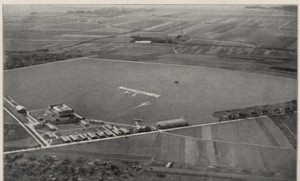 The shift in power to the National Socialists did not go unnoticed at Broitzem. In 1934 the airfield was taken over by the State Aviation Ministry (german: Reichsluftfahrtministerium). The civilian school now served as a cover to secretly train pilots for the new Luftwaffe (Air Force). Soon the school was overtly taken over by the Reichsluftwaffe (State Air Force). Civilian pilot training had to move out, and were stationed at the new built Brunswick-Waggum (German: Braunschweig-Waggum), built from February 1935. At the same time Broitzem was converted into an Air Base (german: Fliegerhorst). It became home to Reconnaissance Training School (german: Aufklarungsschule) 1. Aufklarungsschule 1 was outfitted with a large number of aircraft types, and stayed ath the Air Base until the outbreak of World War II.
They were followed up by Para School (Fallschirmschule) III. Later on during the war more Training Units stayed at the base, but it hardly ever based operational units. Codename of the airbase during the war was "Brezel".
When the US Army took over the base on 12 April 1945 war was over for the air base.

On 5 June 1945 the Americans handed control over the base to the British army. Between 27 April 1945 and 15 december 1945 the airbase was used by 125th Liaison Squadron (USAAF). They used the facilities at the air base for the emergency housing of house displaced persons and former forced labourers. The airfield was largely converted for agricultural use, although some gardens reappeared too. Facilities for flying were dismantled or taken down.
Around 1960 the civilian occupants of the facilities were relocated to residential areas. The former airfield became the location of a new neighbourhood in the Brunswick-Weststadt area. The barracks were partially used by the new Bundeswehr as the Broitzemer Strasse Kaserne. Most of the buildings remained unused however, even though commercial companies were permitted to use them.
The Bundeswehr withdrew from the Barracks in the 1980s. Several companies, institutes and a school became the new owners of the former air base buildings.

Most of the buildings that remain are in good condition. Striking is the presence of a hangar, nowadays a liquor store. The airfield itself however has unrecognisably changed because of a new residential area. On the southeast side of the former airfield some foundations of blown up or demiolished buildings can still be found. 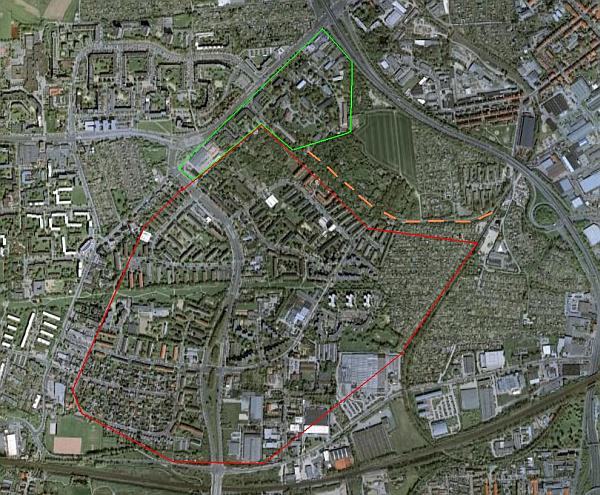