Butzweilerhof was the first civillian airport of the city of Cologne (German: Köln, ICAO: EDUZ/EDCU, planned ETBB after 1994).
The first aircraft to fly near Cologne were flying from a horse racetrack called Köln-Merheim, today better known as Köln-Weidenpesch. During so-called flying weeks aviation pioneers like Louis Blériot or Léon Delagrange showed off what they and their machines could do in 1909 and 1911.
The first 'flight' at Butzweilerhof took place in 1910 when Cologne aviation pioneer Jean Hugot managed to get his aircraft airborne for a few seconds..
Construction of the airfield took place in 1911.
When the Imperial Flying Station and an associated flying school were founded at the airfield in 1912, all civilian aircraft had to move to nearby Köln-Merheim. The flying station was equipped with schoolclasses, living quarters, a maintenance depot and four hangars. Flying training took place in aircraft like the Albatros Taube.
Pilots such as 'Red Baron' Manfred von Richthofen, and flying aces Werner Voss and Gerhard Fieseler flew their first aircraft at Butzweilerhof.

On Ascension Day 1926 the military air field was converted into a civilian airport for the Rhineland and the former Fliegerstation Cöln building became the terminial. The conversion had the firm support of Cologne mayor Conrad Adenauer. The airport had in the previous years been used by the Royal Air Force and the first civilian airliners between Cologne and London also flew from here.
Until World War II the airport developed into "the Hub of the West". Thanks to its central location it soon became the second largest airport in Germany, after Berlin-Tempelhof. On 25 July 1936 a new representative and modern terminal building was opened, with many monumental elements of the National-Socialist architecture.
With the outbreak of World War II civilian use of the "Butz" ended temporarily. 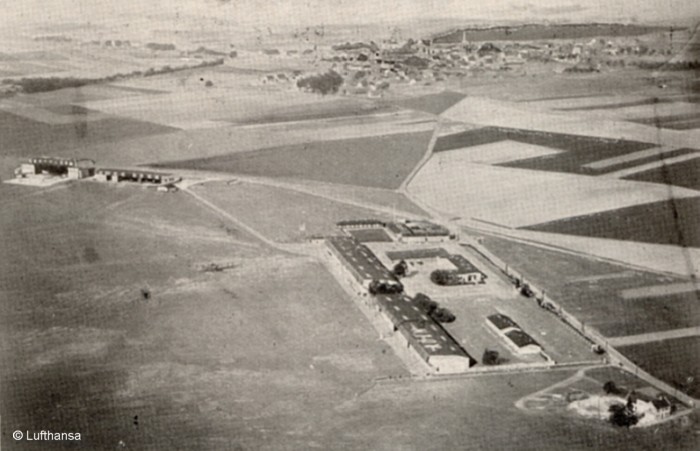 Butzweilerhof in 1927. The hangars on the left belong to Luft Hansa (Lufthansa, via Kölner-Luftfahrt.de) 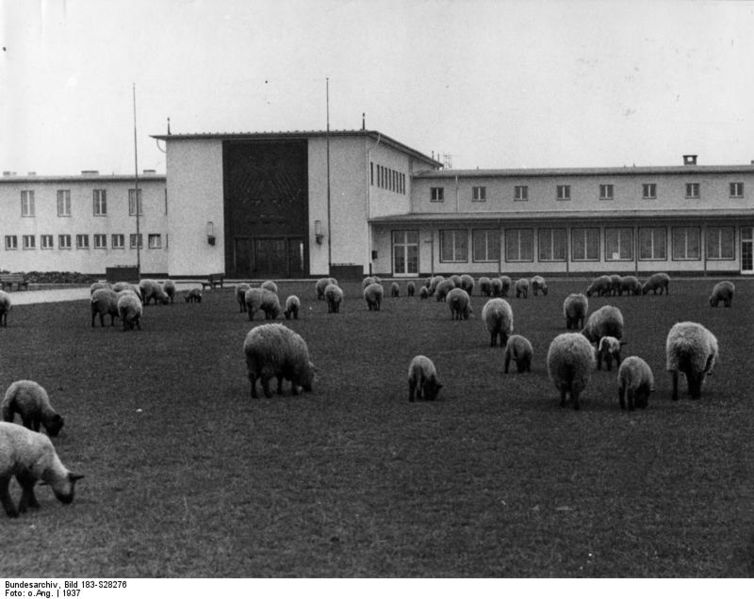 After the war Butzweilerhof, now much smaller in size, was used by occupying and later NATO forces. The location became known as RAF Butzweilerhof when the RAF moved in somewhere in August 1951. They stationed two squadrons with Gloster Meteor NF11 (68Sqn and 87Sqn) at the airfield. Colocated with the RAF was a Belgian squadron of Auster AOP6s and later Piper Super Cub L-18Cs.
In 1957 civilian air lines moved to the new Cologne-Bonn  airport.
In 1960 it was the base for 5 Signals Wing, The Band of RAF Germany and 420 Recovery & Salvage Squadron. RAF aircraft ceased flying from the airfield in 1965 and the RAF formally left Butzweilerhof, closing down the station on 27 January 1967. On 31 January 1967, Butzweilerhof airfield was officially handed over to the Bundeswehr, who used only a very small portion of the former airfield. The remainder was used by the Belgian Army air corps. General aviation use of the airfield stopped in 1980 and flying completely stopped in January 1996 when the Belgian Army withdrew from Germany.

Butzweilerhof had always been a popular place for large crowds. In 1956 200,000 people came to see the National Aviation Day. In 1960 the airport became the location of the world glider championship. In 1980 Pope John Paul II celebrated a mass at the airfield. Between 1996 and 1999 it was the location of the Bizarre-Festivals. Rock group U2 performed at the airfield for 60,000 during the Popmart tour. 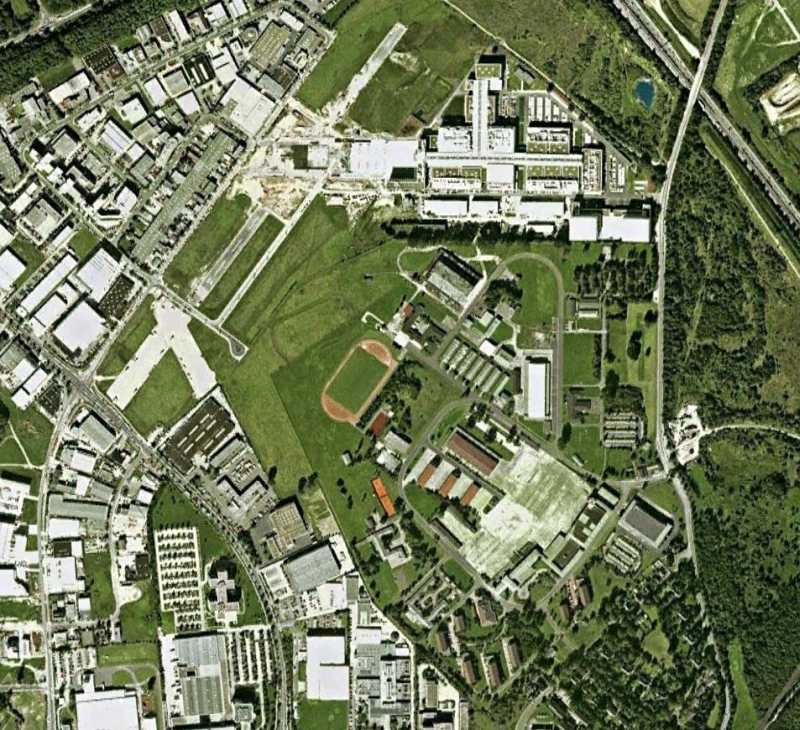 Cologne Butzweilerhof in 2000, when major portions of the airfield, including most of the runway, still existed (Google Earth)

In 2007 much of the infrastructure was still present at the former airport. Werner Müller did an excellent job photographing it and he placed many of them on line.
On Google Earth much had changed by 2010, the runway had almost completely disappeared for instance, only a small portion of the south treshold remains as a parking lot. Some of the hangars had been torn down. The name Butzweilerhof lives on in the aircraft museum of Cologne. Additionally the former station building is being renovated and put on a protected heritage list. 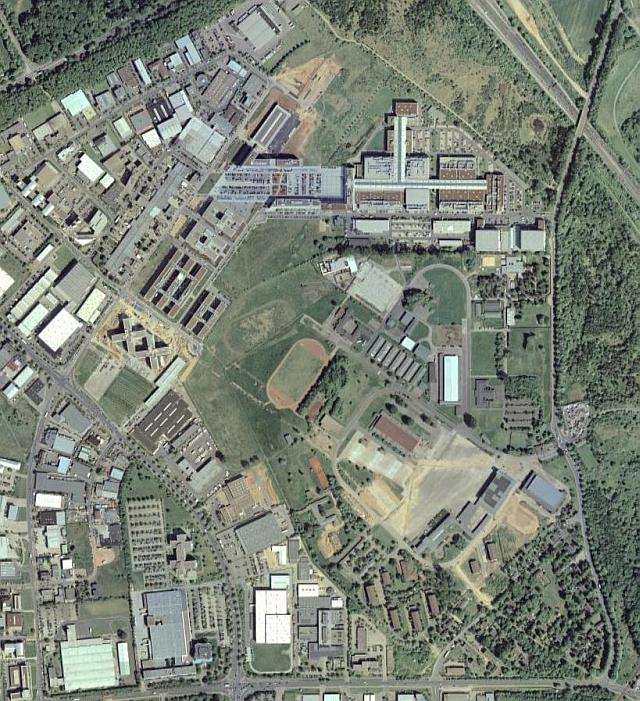 On 22 September 2015, Volker Böhme emailed me that he had been to Butzweilerhof the previous week and that he "took the opportunity to have a look at the airport buildings of Butzweilerhof airport.
The terminal building and hangar 1 are in good shape, but the garages of the motor pool are still quite dilapidated and hangar 2 is partially boarded up on the N side and quite overgrown by weeds. No serious damage to the structure is visible, though. Residential buildings are very much encroaching the airfield, to close for my personal taste, but a nice touch is the aviation-themed playground in front of the main building. 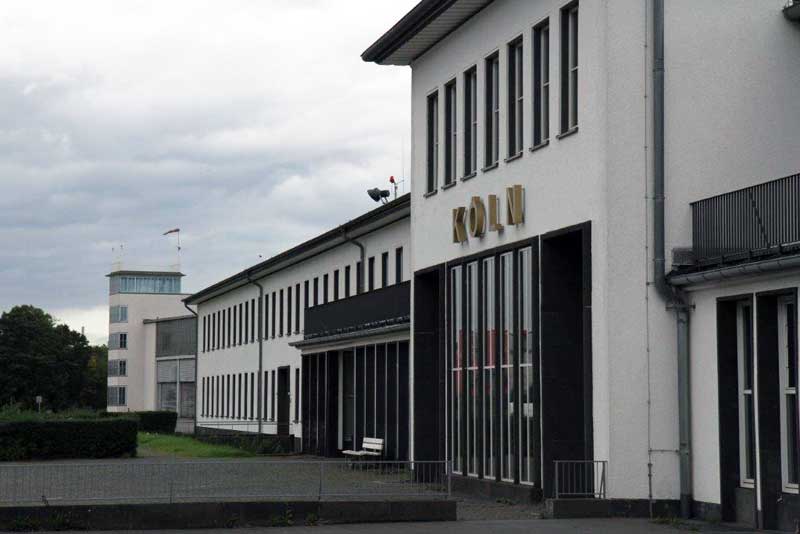 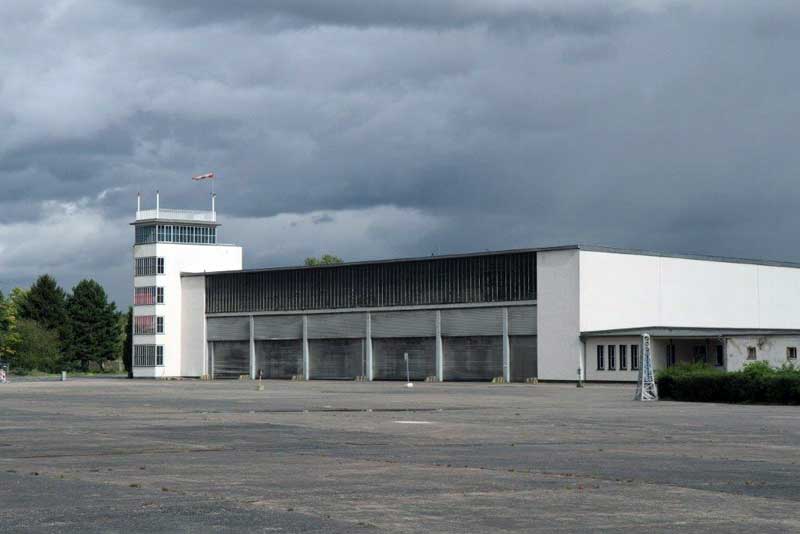 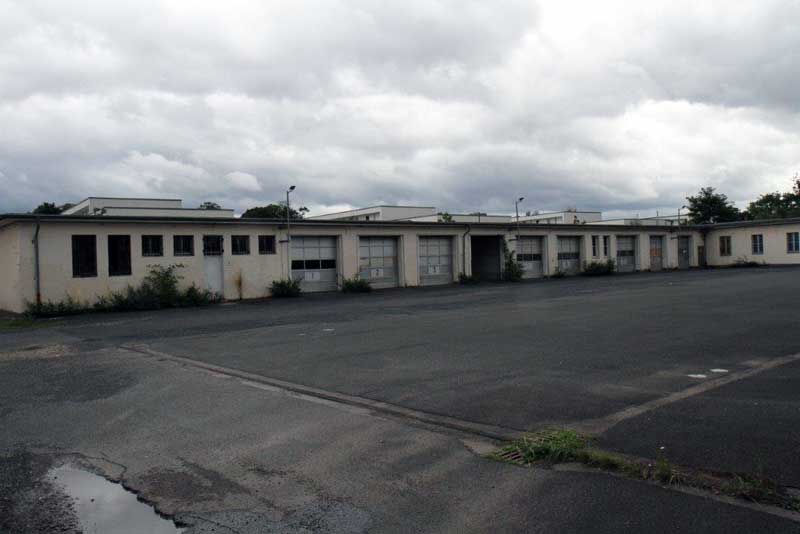 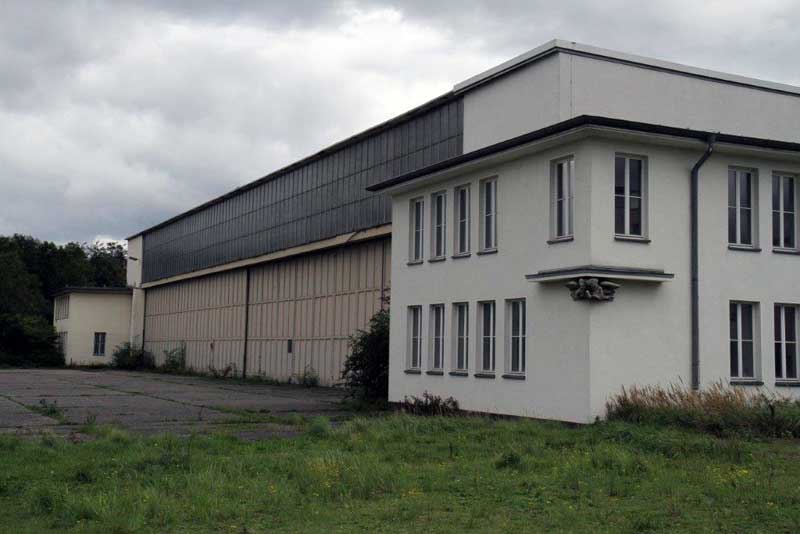 Hangar 2, also somewhat overgrown and boarded up on the rear side, but still sound in September 2015 (Volker Böhme, via email) 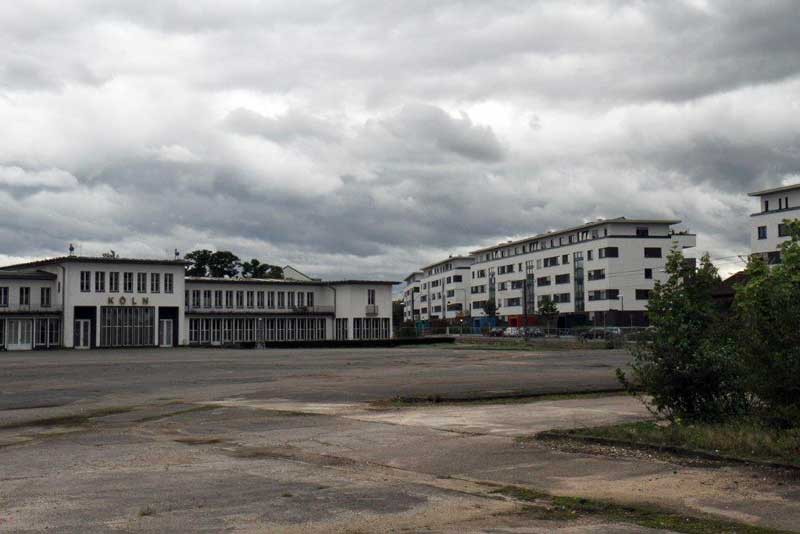 Residential buildings are very much encroaching the airfield in September 2015 (Volker Böhme, via email) 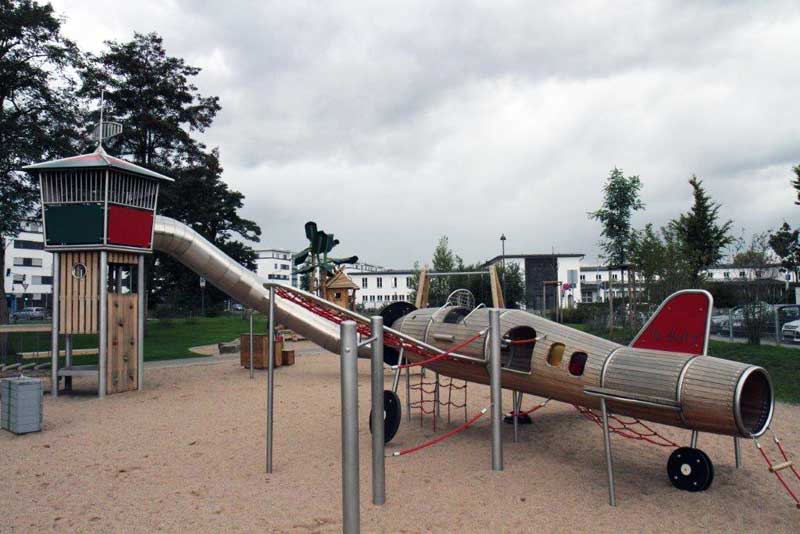 Aviation themed playground with a control tower and an aircraft. Note the "D-BUTZ" registration on the aircrafts tail. September 2015 (Volker Böhme, via email).

Comparing the state to pictures from your site a few years ago, the site has improved a lot overall, particularly the new doors with Lufthansa cranes.
I noticed that the door was open and I went inside. To my surprise, I found some vintage cars and a 'Motorworld' sign. I had a chance to talk to the manager and he told me that a 140 room hotel and a conference center is being planned, using the terminal and the hangars in a similar way as in Böblingen." 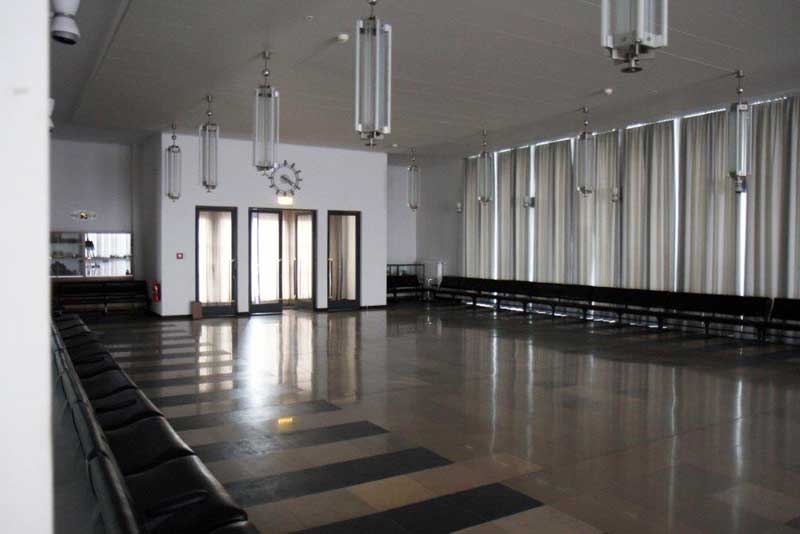 Central lobby of the station building in September 2015 (Volker Böhme, via email). 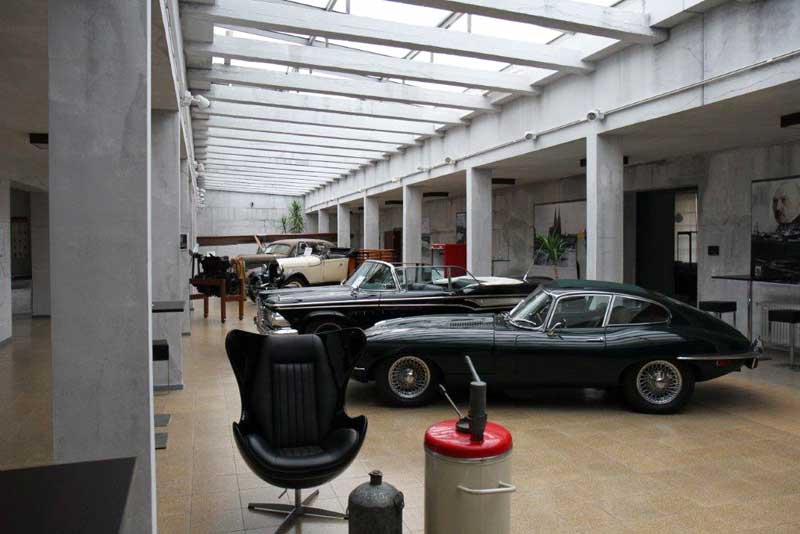 Car collection at Butzweilerhof in September 2015 (Volker Böhme, via email).

Thank you very much for this update, Volker!