Canne Airfield (Servo-Croatian: aerodromu Kane, Italian: aerodroma di Canne) was an airfield 12 kilometers southeast of Termoli on the Adriatic Coast of Italy, northwest of Foggia.
Its origins are unclear, but the airfield was used from August 1944 by the Royal Air Forces 281st Wing (6, 73 and 253Sqn) as part of the Foggia Airfield Complex. Soon the airfield hosted two more air forces; the Italian Cobelligerent Air Force (20° Gruppo Caccia of 51° Stormo) and the Yugoslav Partisan Air Force (351 and 352 Sqn of the RAF). The airfield and its units, flying Spitfires (Italians and Yugoslavs) and Hurricanes (Yugoslavs), were heavily involved in the war over the Balkans. Although their HQ remained at Canne, the Yugoslav squadrons moved to the airfield on the island of Vis off the Yugoslav coast on 1 January 1945.
The Italians continued to fight with 356° and 360° Squadriglia of 20° Gruppo from Canne until wars' end in May 1945. 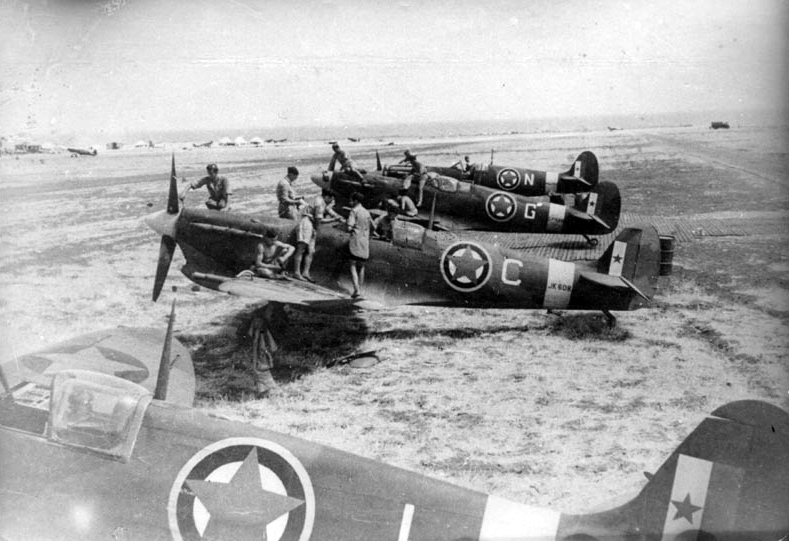 Although wearing RAF and Partisan Yugoslav roundels, these aircraft are actually 20° Gruppo Caccia Spitfires, before their markings were painted over in 1944.


Flying activity at and above Canne Aerodrome, Italy. The footage shows RAF and Italian Spitfires, P-39s and the Canne Aerodrome both on the ground and from the air. Filmed by RAF Film Production Unit No. 2 in 1945 (Imperial War Museum)

Canne airfield (left), Madna airfield (center) and Ramitelli (right) in September 1945. A fourth airfield (Nuova) can faintly be seen under Ramitelli and a fifth airfield (Bifereno) was located nearly on the beach north of Canne, roughly under the white blur on the left of the photo (Istituto Geografico Militare).

Not too long ago, the town council of Campomarino had signposts installed marking the positions of the three airfields built around Campomarino in WWII.