Carlisle airfield (also known as RAF Carlisle, RAF Kingston and Kingston Municipal airport) was an airfield 425 kilometers northwest of London.
It was opened in the early 1930s by the Carlisle County Borough Council as Kingstown municipal airport. At the time it was located well outside the city boundaries. The airport was a typical 1930s grass field airstrip with no hardened runways. Although used by the Border Flying Club as its home base, the new airport was underused and uneconomic, and therefore the airfield was eventually sold to the Air Ministry in 1936.
The RAF installed concrete taxiways, hangars, administrative buildings and several estates of married quarter housing for officers and other ranks. The new station opened for operations as RAF Kingstown on 26 September 1938. Kingstown became home to two operational bomber squadrons flying Fairey Battle bombers.

When World War 2 broke out in 1939, Kingstown's runways proved too short for the latest generation of large multi-engined bombers. As there was no room to expand the runways, the RAF opted to build and develop a new airfield at Crosby-on-Eden, which became operational in February 1941. Instead of being closed, RAF Kingstown was retained by the RAF and converted to No 24 Elementary Flying Training School (EFTS). At some point in time it was renamed RAF Carlisle.
As the war developed and the need for pilots increased the EFTS expanded its operations onto several local grass fields nearby. The main trainers used at the school were Tiger Moths and Miles Magisters.


RAF Carlisle featured in one of the most audacious escape attempts by German prisoners of war during World War 2. On 24 November 1941, two German pilots, held at POW Camp 15 in a former hotel at Shap (and now again the Shap Wells Hotel), escaped with flying jackets over their Luftwaffe uniforms and carrying forged identity documents that claimed them to be Dutch airmen attached to the RAF.
Fighter pilot Leutnant Heinz Schnabel of 1/JG3 Jagdstaffell and Heinkel bomber pilot Oberleutnant Harry Wappler from KG27 entered RAF Carlisle without any apparent difficulty and with the help of an RAF ground mechanic they started up a Miles Magister trainer aircraft and took off. They even landed at another RAF airfield to refuel. Setting off for the Netherlands, they suddenly realised the aircraft’s range would be insufficient and so they decided to turn back. After landing in a field near Great Yarmouth they were recaptured and taken to RAF Horsham St Faith. From there, they were returned to the Shap POW camp to spend 28 days in solitary confinement. Both airmen were then shipped to more secure confinement in Canada.

In 1941 RAF Carlisle was redesignated as 15 Flying Grading School. Pilots who had already undergone basic flying training elsewhere were assessed for their suitability for conversion to either fighter or bomber operations. The station retained this training function until  1947 when 15 EFTS disbanded and the RAF left. By that time, Manx Air Charters were already offering services to Ronaldsway from Kingstown airfield (RAF Carlisle was reduced to the 14 Maintenance Unit site to the North of the airfield) with dH Rapides, which were taken over by BEA in February 1947. 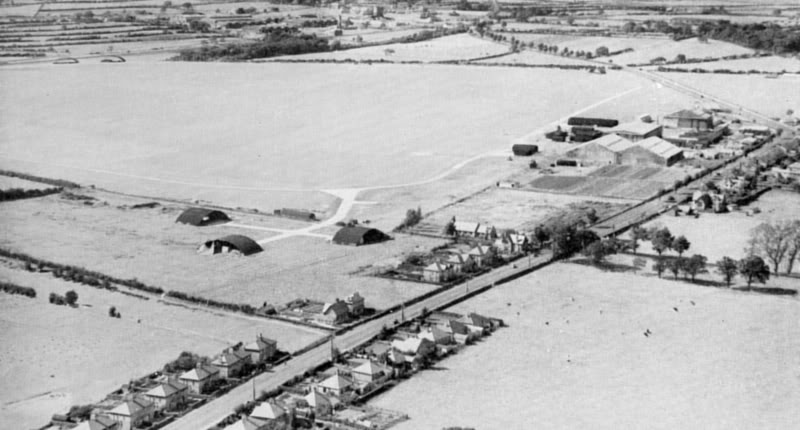 Regular services from Kingston ended in the Summer of 1956. Kingston airfield closed the following year. RAF Carlisle remeained in use much longer though: it became home to 14 Maintenance Unit (14MU), the RAF's most northerly storage facility in England.The only remaining aviation activity as late as the 1980s was a helipad mainly used by the Royal Navy during aerial marine surveys of the Solway Firth.
In 1992 radioactive radium was discovered at the site by accident, when a member of the Royal Observer Corps walked across a patch of ground testing a recently recalibrated PDRM82 geiger counter. After further investigations it was realised that the RAF had incinerated thousands of luminous dials from the old wartime trainer aircraft in accordance with the disposal policy of the 1940s and 1950s (known as "bash, bury or burn"). The resulting radioactive waste had been scattered and used during later landscaping of the site. It had also been used as packing around fence posts on the airfield boundary. Hotspots of up to 250,000 becquerels of radioactivity were identified where unburnt dials had been abandoned in piles on the ground. Such levels would be harmful inside the body and could burn the skin in hours. Since 1992, scientists have analysed up to 10,000 soil samples from the site and published thirty separate reports. Over three hundred cubic metres of soil contaminated with radium-226 at levels of at least 4 becquerels per gram were condemned as radioactive waste and transported to the low-level waste dump near Drigg.

RAF Carlisle base was finally closed in September 1996. It stood empty for a few years, before being redevelopend into the extensive regional business park known as Kingmoor Park, the role that continues today. Parts of the area are still recognisable as former Air Force, especially on the northwest side.
contact us about this airfield