Carnaby airfield (RAF Carnaby, also known as RAF Bridlington) was an airfield 285 kilometers north of London.
The airfield was built from 1943 and opened in March 1944. Unlike other RAF airfields it had only a single runway, but it was 5 times wider than a standard runway. It was one of only 15 airfields in the UK to operate the Fog Investigation and Dispersal Operation (FIDO). FIDO consisted of two rows of burning petrol on each side of the runway. The heat generated by the system was enough to rise the temperature above the runway, cutting a hole in the fog. It provided aircrews, often in battle damaged bombers, with a brightly lit strip indicating the position of the runway.
Over 1,400 bombers made an emergency landing at the airfield up until the end of the war. After being refuelled and/or repaired, they would return to their respective home bases. Only three such airfields were built, the others being RAF Manston and RAF Woodbridge.

Flying Officer F H Greenhalgh, a wireless operator serving with No. 158 Squadron RAF based at Lissett, Yorkshire, contemplates his lucky escape when the propeller from the damaged port inner engine of Handley Page Halifax B Mark III, MZ928 'NP-S', smashed into his position during a raid on Duisburg,  Germany, in the early morning of 14 October 1944, (Operation HURRICANE). The aircraft was hit by anti-aircraft fire over the target, putting the port inner engine out of commission and shooting away two of Flying Officer Greenhalgh's toes. As the aircraft completed its bombing run and turned for home, the propeller and reduction gear sheared off and smashed a large hole in the fuselage, just where Greenhalgh's legs would have been, had he not shifted position in order to bandage his wounded foot. The pilot brought the damaged aircraft back, making an landing at Carnaby Emergency Landing Ground, where this  photograph was taken ( © Imperial War Museum (CE 161)). 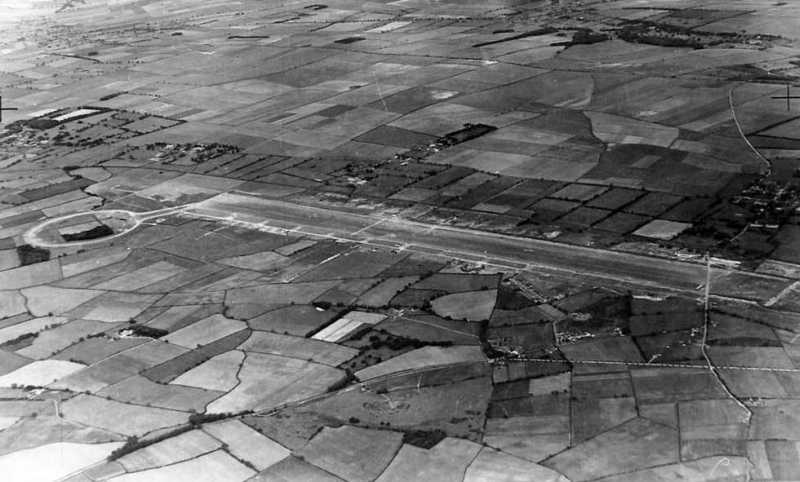 RAF Carnaby, photographed around May 1945. Clearly visible is the circular dispersal on the south side ( AirfieldInformationExchange ).

Carnaby closed in March 1946 and was left to the elements. It reopened as a relief landing ground for RAF Driffield in 1953, when the Korean War sparked a renewed need for pilots. It closed only a year later, though, although it was expanded by adding extra taxiways and dispersals to the southwest dispersal site. The setup very much resembled the NATO airbase plan that was used throughout Europe in the 1950s. The airfield reopened again in 1958, this time as a Thor Missile base. 150 Sqn was based here as the resident Thor unit.
In 1963 the base was closed for the third and final time. It was abandoned completely by 1969 and sold to the Bridlington council in 1972. RAF Carnaby, photographed around 1960. The circular dispersal on the south side was converted with NATO-like parkings and an additional taxitrack with parkings to the center of the runway. Three Thor launch pads can be seen also ( AirfieldInformationExchange ). 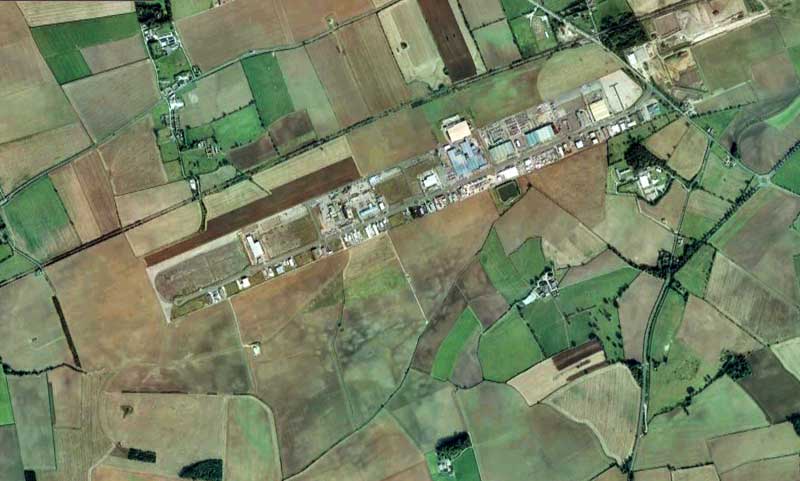 Carnaby industrial site still showed remains of the airfield in 2002. Some light scarring caused by the dispersals can also still be seen (Google Earth).