During the Second World War it served as a base for flying boats of the RAF and the Royal Canadian Air Force. Planned and built as RAF Castle Archdale, it was located on the banks of Lough Erne, the most westerly flying-boat base in the UK, but it opened as RAF Lough Erne in February 1941.
RAF Lough Erne immediately became an important flying boat base for Coastal Command due its close proximity to the Atlantic, just about 30 miles away. Unfortunately those 30 miles lay across County Donegal, a part of neutral Eire, the present day Republic of Ireland. However a secret deal was struck between Britain and the Irish Republic, which allowed Allied aircraft to overfly Donegal along a narrow corridor to reach the Atlantic. This concession gave the Sunderlands and Catalina's an extra 100 miles range, which was crucial to the protection of the North Atlantic convoys, and the detection of enemy ships and U-boats. .
The flying boat HQ was at Castle Archdale while a satellite training base was set up at Killadeas. Castle Archdale provided accommodation, canteens and recreation facilities, stores, a control tower and station headquarters, hangars, flying-boat pens, a slipway, workshops and a machine-gun range.
The first flying-boat to land was a twin-engined Vickers Supermarine Stranraer, but in April 1941 209 Sqn arrived, equipped with the medium-range Saunders-Roe Lerwick. Intended to replace the long-range Short Sunderland, the Lerwick's handling was so appalling that only 21 were built. However, by the time its faults became apparent, Shorts had dismantled the Sunderland jigs and so it took some time to resume production. On only two occasions were U-boats attacked by a Lerwick and neither submarine was damaged. Upon their arrival at Castle Archdale, 209 Sqn began to replace the Lerwicks with lend-lease Consolidated PBY-5 Catalinas.
Officially, seventeen US Naval Air Service volunteers went to train the British pilots on how to fly the planes. Before they left, though, the Chief of Naval Operations told the volunteers that the US would be entering the war soon and that they should learn about war flying while in Britain. Of the volunteers, eight Americans went to Oban in Scotland and nine to Castle Archdale's 240 and 209 Sqns. When they arrived, nine British co-pilots went on leave and the Americans began to act as full crew members. 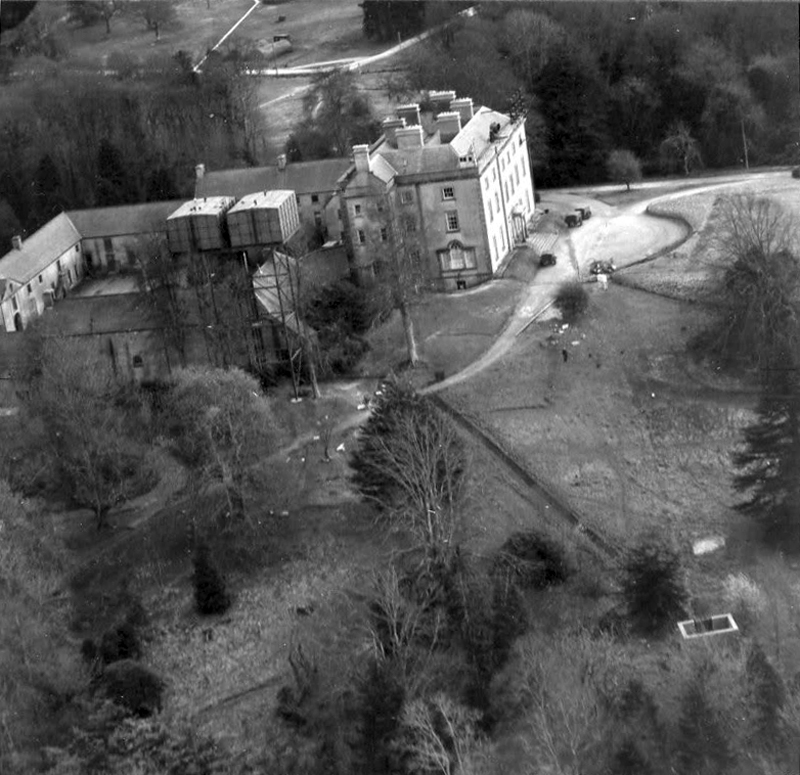 The manor house at Castle Archdale, which acted as station HQ, control tower and officers quarters, ca. 1941. Clearly visible are two large water tanks on stilts, present at almost every RAF station at the time. Less visible are what appears to be a searchlight at the the center of the front facade of the manor and a small flying control post on the lopt left.

In May 1941 the German battleship Bismarck was found during a routine patrol by a Catalina flying out of Castle Archdale. Its contribution to the hunt for the Bismarck heralded the end of the battleship era: without air protection, the big ships were effectively obsolete. Germany realised that, and brought the Scharnhorst, Gneisenau and Prinz Eugen home to Germany. 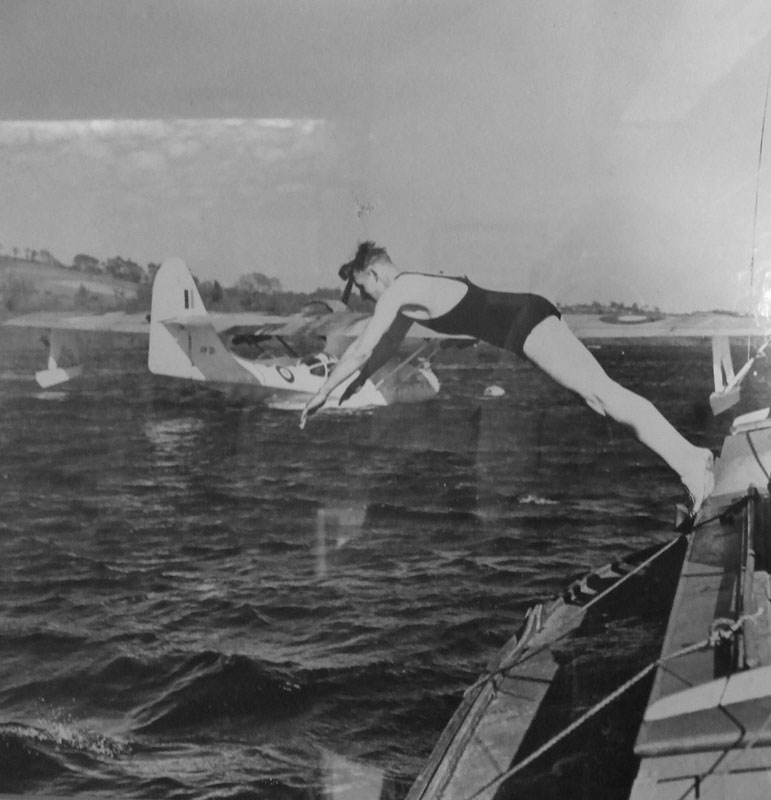 A peaceful scene at Castle Archdale in Northern Ireland on 20 May 1943, as a seaplane tender passes a Sunderland of 201 Sqn. The censor has removed all trace of the aircraft’s fuselage-mounted ASV aerials. Photo by RAF official photographer Mr. H. Hensser. Royal Air Force Coastal Command, via the Imperial War Museum. 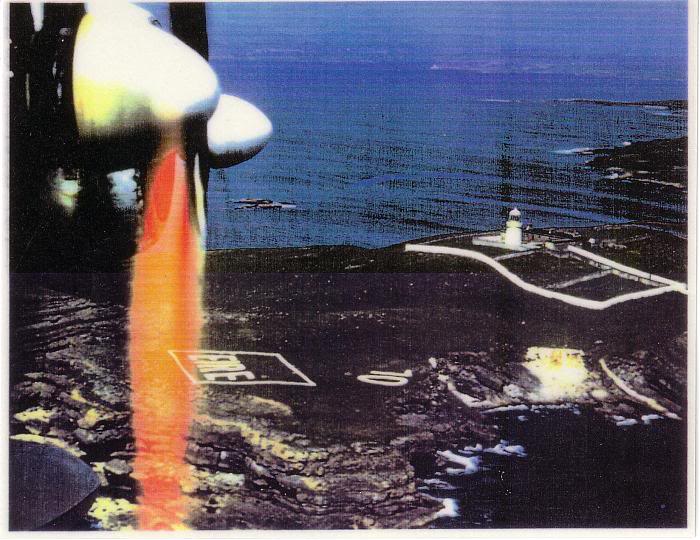 The lighthouse at St. John's Point -a finger of land extending out into Donegal Bay-  was a land mark for returning aircraft , at night its light would greet them and the land would show up on the "SE" sets. Shortly afterwards they would pick up the Castle Archdale BABS approach system or in good weather they could see the River Erne leading them back to the landing area. Notice the large square marked "Eire" and the number 10 above it. Just like on runways, '10' indicated a heading: Castle Archdale lies on exactly 100 degrees from here. The markings, albeit VERY faded, could still be recognised in aerial photography as late as 2010 (ww2talk) 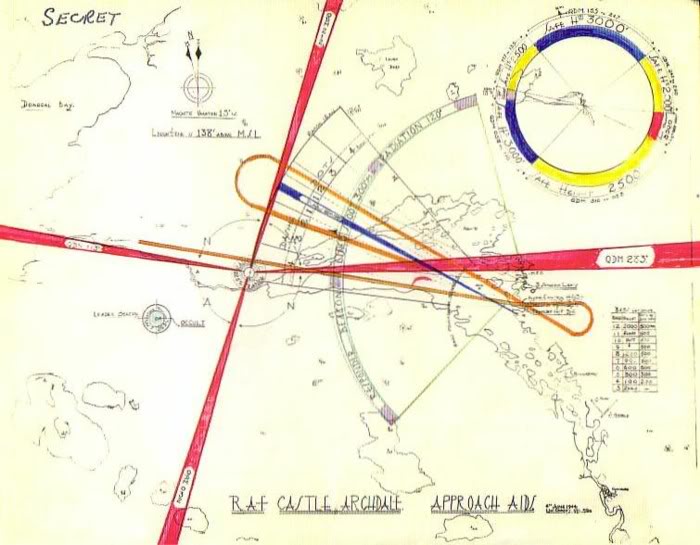 A blind approach system called BABS as it appeared per 1943, although it was changed in 1944. If used correctly, BABS was accurate and safe and would bring any crew safely down to the water (ww2talk). 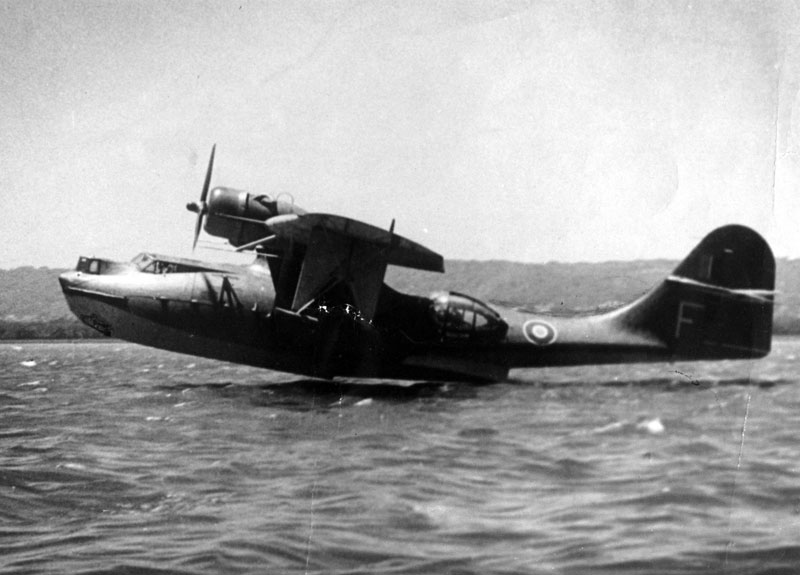 A Catalina patrol bomber is about to land in this undated photo taken at Lough Erne (coll. Rory Heard, via email). Consolidated Catalina's moored out on Lough Erne near RAF Castle Archdale during 1944. Note the base in the upper left of the picture (seawings).

The big freeze. Nearly all the aircraft on strength with RAF Castle Archdale's three Coastal Command squadrons are visible here, drawn up out of the water in Northern Ireland as Logh Erne froze over in January 1945. More than 30 aircraft can be seen, including Sunderlands of 201 and 423 RCAF Squadrons and 202 Squadron's Catalinas (CH 14837 from the collection of the Imperial War Museum). 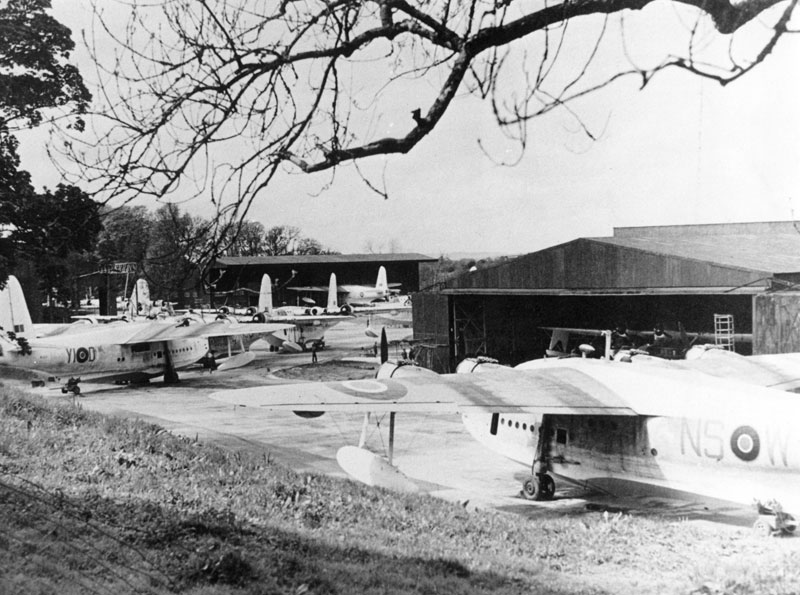 Similar photo, but taken from the ground (coll. Rory Heard, via email) 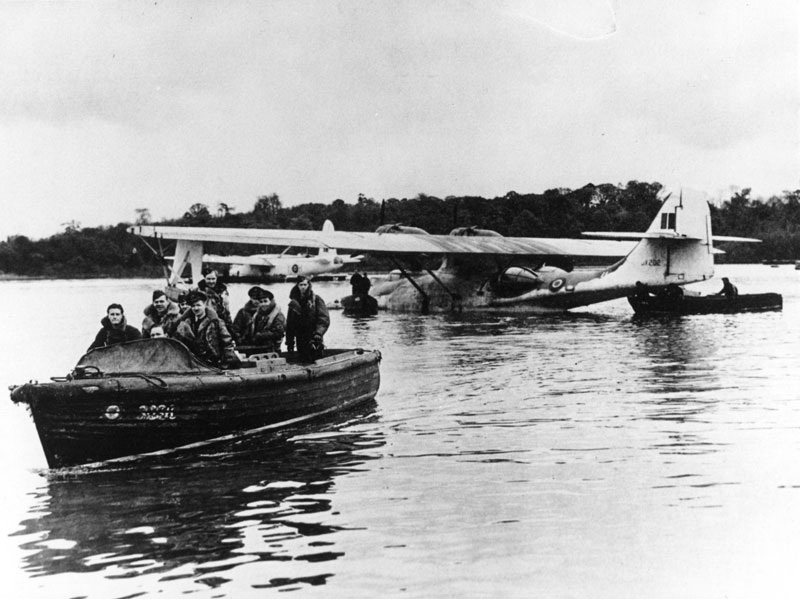 A RAF tender takes a Catalina crew back ashore while two others look after XJ202 in this 1945 photo taken at Lough Erne (coll. Rory Heard, via email). 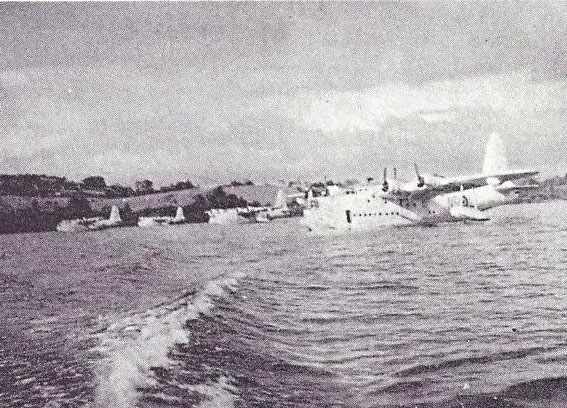 The RAF left Castle Archdale in 1957 and today it is part of Castle Archdale Country Park. The slipway remains in use and the concrete stands where Catalina aircraft once parked are now part of a caravan site. Other buildings lie derelict and overgrown in the surrounding forest and the refuelling jetty also still exists in the lake. A museum in the park grounds has a section devoted to its role during the Second World War. 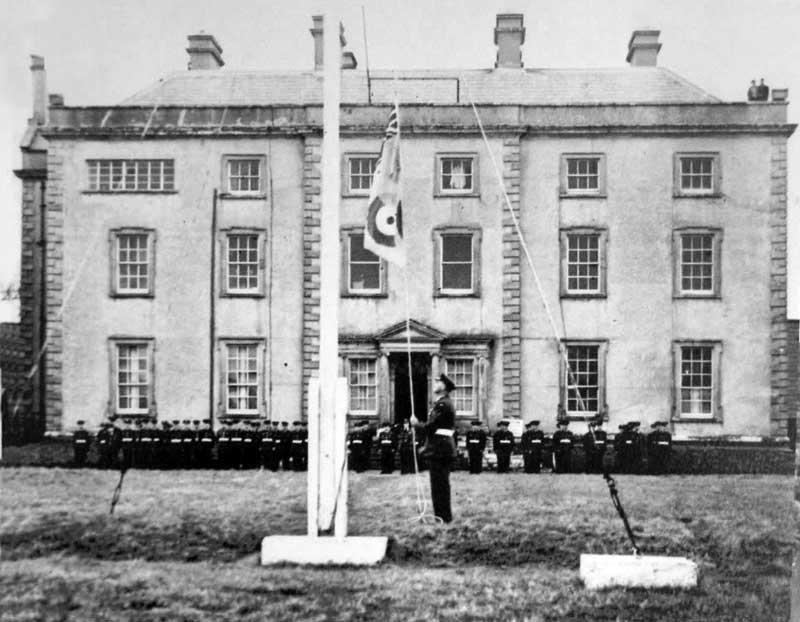 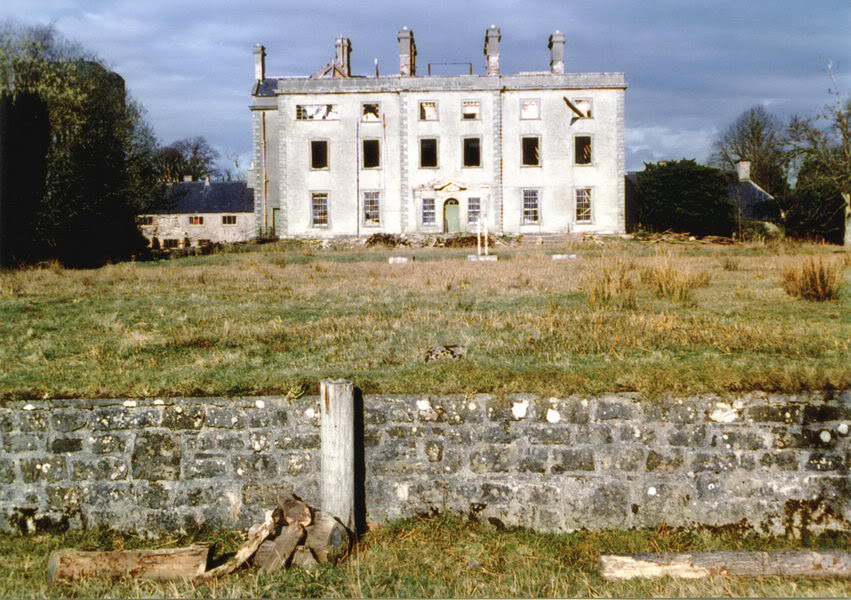 The skeleton of Castle Archdale Manor in 1968. Sadly, the manor house was taken down in 1970.