Airfield Cologne Ostheim (german: Flugplatz Köln-Ostheim), also known as Köln-Merheim, developed around 1911 on the south side of the Olpener Straße in Cologne, Germany.
It grew considerably in 1912, as the city of Cologne leased Butzweilerhof to the military for a period of 20 years.
When Germany lost World War I the airfield became home to several RAF squadrons from 1918 onwards.
One of the services they provided from 1919 was making daily newspaper and mail flights.


Then there is a roughly 10 year gap in history as the first mention of Merheim is in 1934 when the State Aviation Ministry (german: Reichsluftfahrtministerium or RLM) ordered the planning of a new military airfield in the Merheim/Ostheim area..
The planning was done in great secrecy, as Germany was banned from having military on the right (west) bank of the Rhine by the Locarno Treaty.
On 3 July 1936 the Wehrmacht broke the treaty by moving into Butzweilerhof with 9 He51 of III. Gruppe/Jagdgeschwader134, followed by a Ju52/3m with munition.
Only one of them was actually operational, the others were not and one did not even have weapons, and they left the same afternoon for Düsseldorf.
They left staff and 8. and 9. squadron (Staffel) of III./JG134 until their final relocation to the new airfield at Köln-Ostheim (as Nerheim was now known).
Construction of Ostheim began on 27 April 1936 and was supposed to be completed on 1 October that same year.
The tower of a nearby church had to be clipped for flightsafety.
Although Fliegerhorst Ostheim was still under construction, Walther Horten began building his "Nurflügel" (flying wing) powered glider in one of its hangars, for a first flight in 1937.
Ostheim was transferred to the Luftwaffe on 8 June 1937, and while I/JG234 flew in with Bf109 and He51 the ground personnel marched in from Butzweilerhof.
Chief Technical Officer Walter Horten of I./JG234 and his brother Reimar made a successful first flight in his flying wing Horten H Vb.
In 1938 'his' Jagdgeschwader was renamed I./JG132 "Schlageter".
I./JG132 "Slageter" received Bf109E1 and -E3 fighters in early 1939, returning all their He51s.
The unit was 'renumbered' to I./JG26 on 1 May 1939.
On 28 August 1939 the mobilisation began in Germany placing Ostheim in command of Butzweilerhof and the artillery range Wahner Moor which turns the latter into Fliegerhorst Wahnerheide. 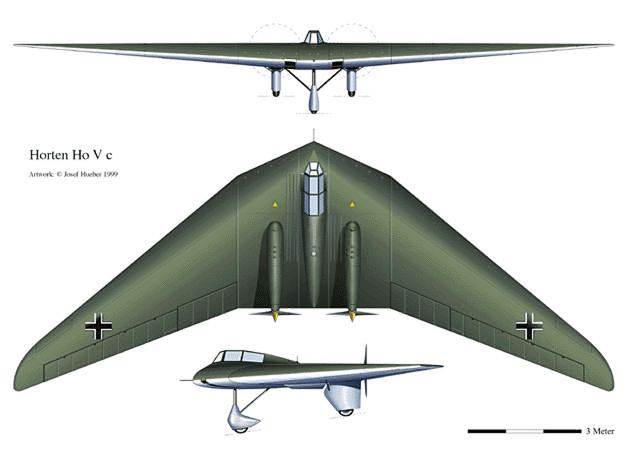 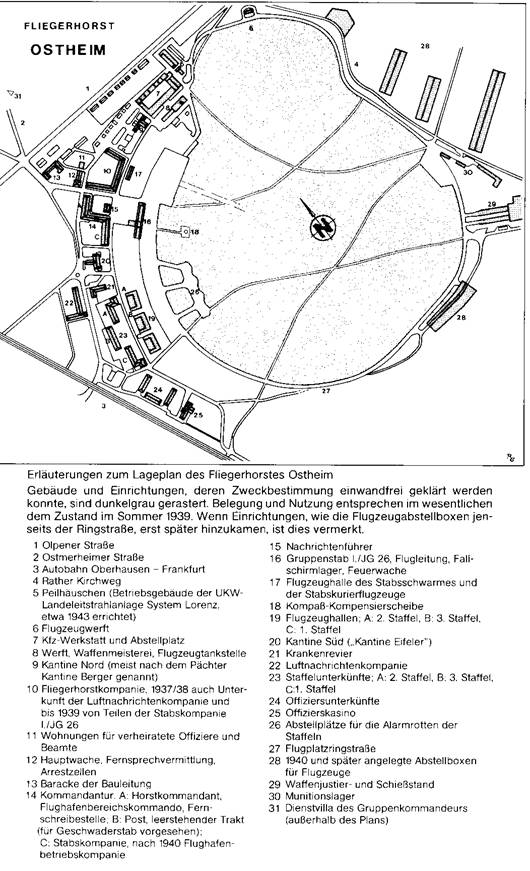 Map of Köln-Ostheim summer 1939, giving a good impression of the former airfield (source).


In January 1940 cargo gliders were stationed at Ostheim in great secrecy in preparation for the attack on the fortress Eben Emaël in Belgium.
Hermann Göring visited the airfield in late February.
A RAF Spitfire made a high altitude reconnaissance flight over Cologne and photographed Butzweiler and Ostheim on 7 April 1940.
On 10 May 1940 the western front was opened, and the attack on Eben-Emael began at Ostheim.
As a result the Royal Air Force bombed Cologne for the first time and also hits Ostheim
From June 1940 until September 1941 the airfield was quiet as most flying units have been deployed elsewhere.
The only flying activity came from Erprobungsgruppe 210 (EKG210), who were tasked with testing a new bomb release mechanism in the first two weeks of July.
From mid-August 1940 III./NJG1 was stationed at the base, flying Bf109 and Bf110 fighters.
From mid June till August 1941 the airfield and Cologne were attacked by the RAF several times and Bf109E-3s of the "Versuchsnachtjagdstaffel 109 Ostheim" tried to counter the attacks.
Four captured Russian SB-2 bombers, pressed into Luftwaffe service as target tugs operate from the airbase in 1942.
The city of Cologne was targeted by the 1000 bomber attack of the RAF.
Ostheim became the distribution point of brand new Messersschmidts and Focke-Wulfs to frontline squadrons.
On 17 July 1943 a Spitfire XI of 542sqn performed a reconnaissance flight over Ostheim, which was worrying, because so far it had escaped unwanted attention.
En route to a display to Adolf Hitler an Me262 made a stopover at the airfield in November.
In May 1944 1, 2 and 3Staffel (Sqn) of NSGr.2 (Nachtslachtgruppe) moved into Ostheim from the east to combat Allied bomberes with ca. 80 Ju87D-3 and D-5.

Because more and more aircraft were lost since the Allied invasion the Luftwaffe decided to pull units more to the rear.
As a result Ostheim became a Day Fighter base.
Also the airbase was ever increasingly under attack from Allied bombers druring the final months of 1944.
On 1 January 1945 Ostheim was one of the starting points for operation "Bodenplatte", the others being Köln-Wahn and Bonn-Hangelar.
Around 60 FW190F-8 fighters were scrambled and led by the highly decorated Lt-Col Alfred Druschel .
Druschel never made it back, he is listed as missing in action from what became known as "the Legend of Asch".
Ostheim was bombed one last time by the USAAF on 28 January 1945, even though I/NSG5 had already left Köln-Ostheim and Köln-Wahn.
4 weeks later an aerial battle occurred over Köln when 22 FW190D-9s stumbled upon USAAF P-47 Thunderbolts.
2 Thunderbolts are shot down, while 4 of the Focke-Wulfs were lost and a 5th one crashed on landing.
Even when US forces took over the city of Cologne Luftwaffe personnel was destroying the airfield and all equipment on it.
Only two repaired figthers (a Bf109 and a Ju88 night fighter) were flown to safety before the Americans seized the airfield on 13 April 1945 after weeks of fighting in and around Cologne.
The Americans did not gain much from the airfield, as all airfields were as damaged as the city of Cologne (one of the hardest hit in Europe) itself.
The British Army took over from the Americans after the war.
They were not at all interested in reparing Ostheim, but focused on Köln-Wahn (which became Cologne-Bonn airport) and later Butzweiler.
The last flight from airfield Ostheim was done by a glider taking off from the ring road, coincidentally the first aircraft built in post-war Germany. 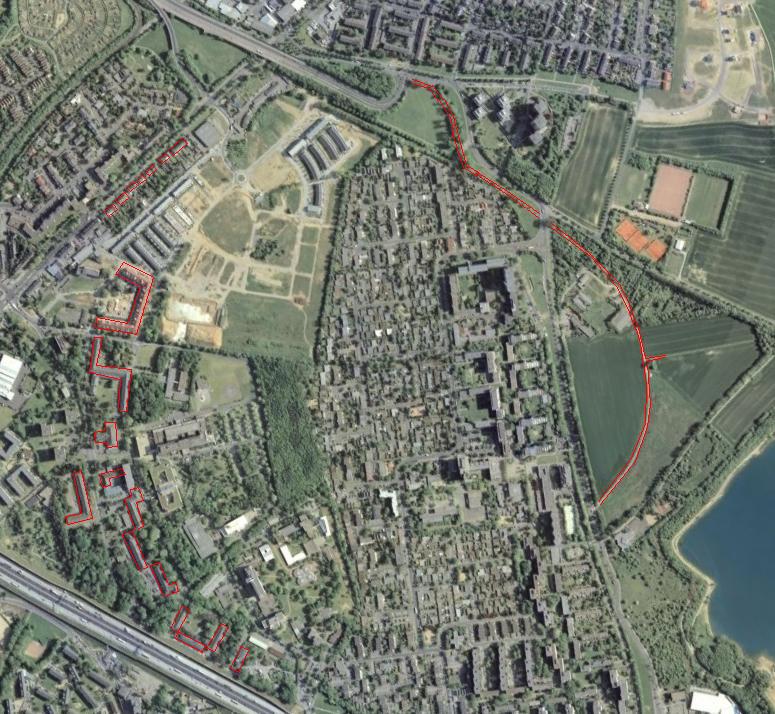 Köln-Ostheim in 2006, red lines show what remains of the former airfield


Although Köln-Ostheim is no longer an airfield, many buildings are still recognisable.
The large U-shaped barracks building was put into service as Colognes hospital, which later expanded over much of the airfield.
The buildings of the officers quarters and -mess still exist too.
A large portion of the center field is now occupied by a park, and more than half by a housing area
Another part of the field was sold to a chemical company, which has since moved to another location.
There still is aviation activity though: the Cologne hospital has its own heliport (with a hangar), which is located on the spot where compass calibration used to be done. 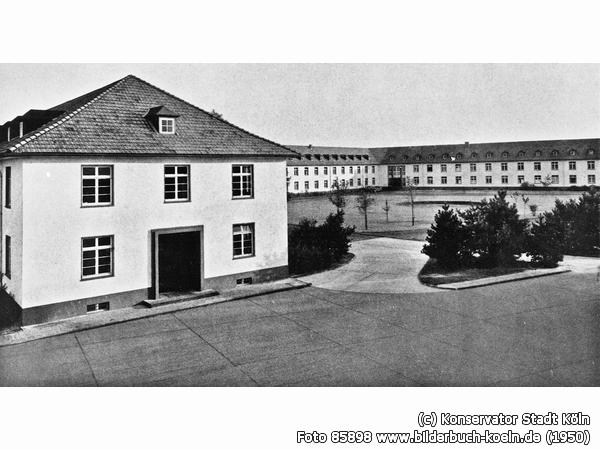