Comiso air field (Italian: L' Aeroporto di Comiso "Vincenzo Magliocco", also known as NATO Base Comiso, ICAO: LICB) is an airfield on Sicily in Italy.
The airfield was built during Italy's fascist period, between 1937 and 1939. It is named after Brigadiere General Vincenzo Magliocco, who died during the war in Ethiopia in 1936.
During World War II it was taken over by the German Luftwaffe in 1943 after its withdrawal from Tunisa. It was severely damaged by two allies bombings on 26 May and 17 June 1943, in preparation for Operation Husky, the allied landings on Sicily.
During the actual invasion, German Ju-87 Stukas took off to bomb the landing beaches, but when they returned to the airfield to rearm and refuel they found it had already been captured by the Americans. The Americans repaired the airfield, and used it to support airborne and assault glider operations. 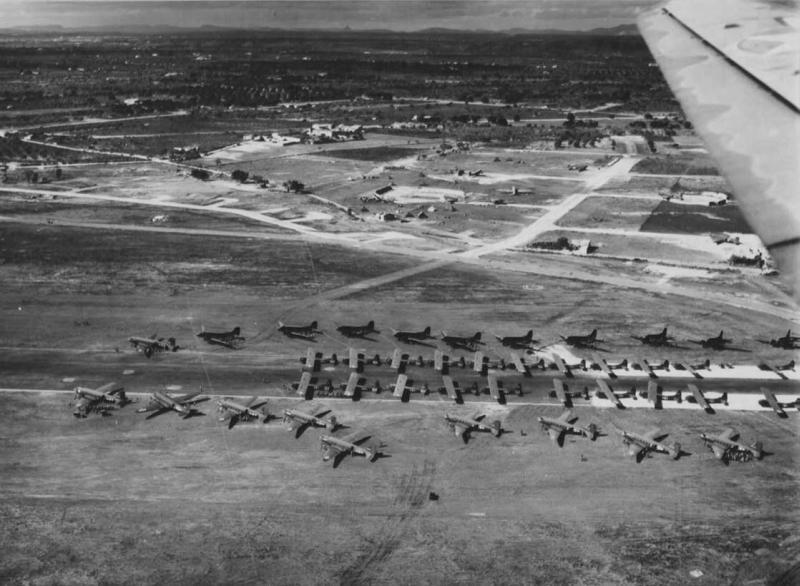 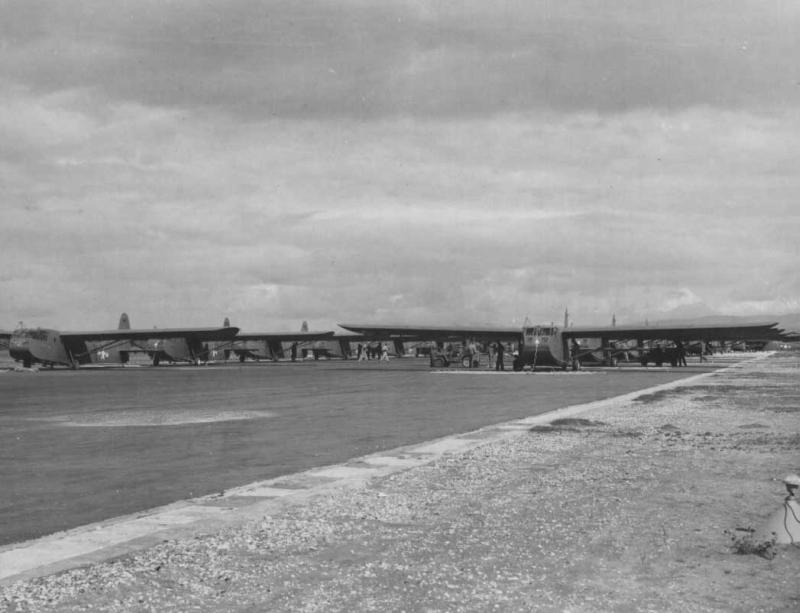 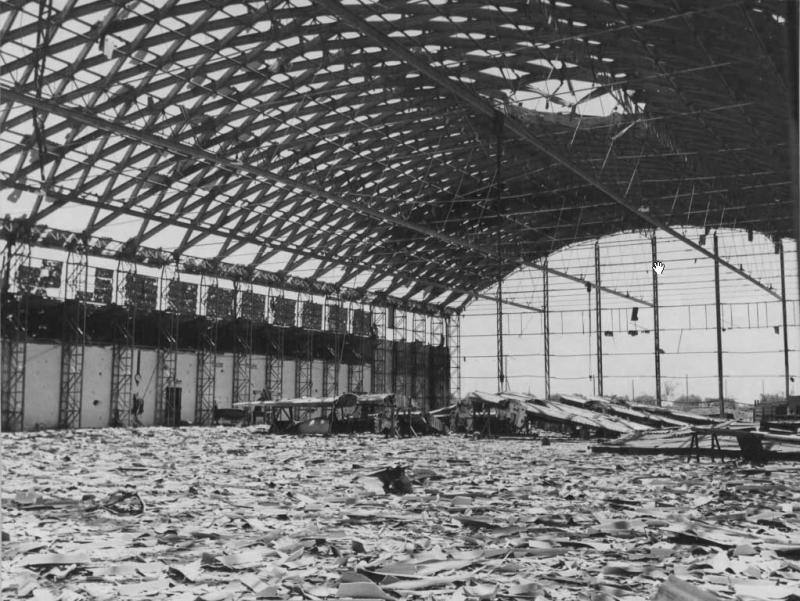 Bomb damage to a hangar and the aircraft parked inside at Comiso, photographed in March 1944 (USAAF). 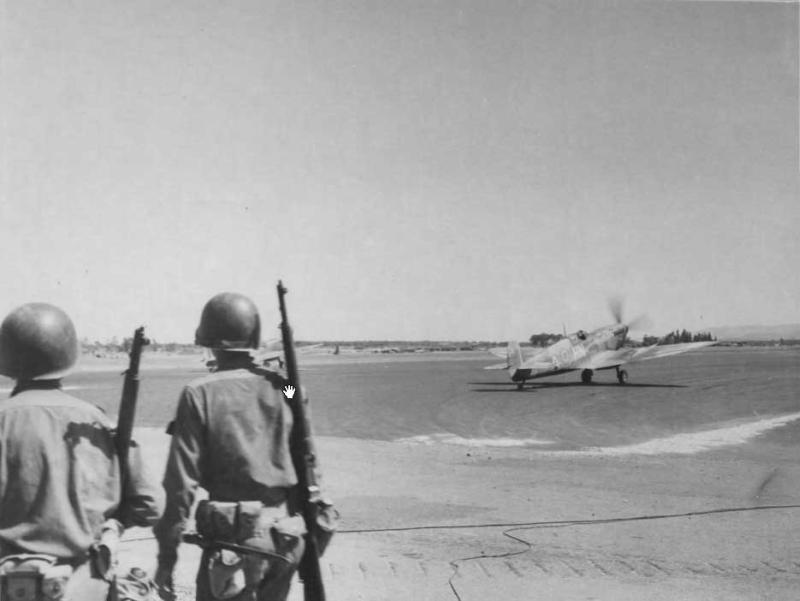 An RAF Spitfire prepares to take off from Comiso as two GIs are watching in March 1944 (USAAF).

After the war the airfield was rebuilt and expanded with a 1,740m (5,710 ft) runway. It opened to civilian flights with a scheduled service to Catania by LAI (Linee Aeree Italiana). Later, between 1965 and November 1972, it  had services to Palermo-Comiso. During that period it was also a millitary base, housing 41° Stormo until 1973. The airport was little used however. 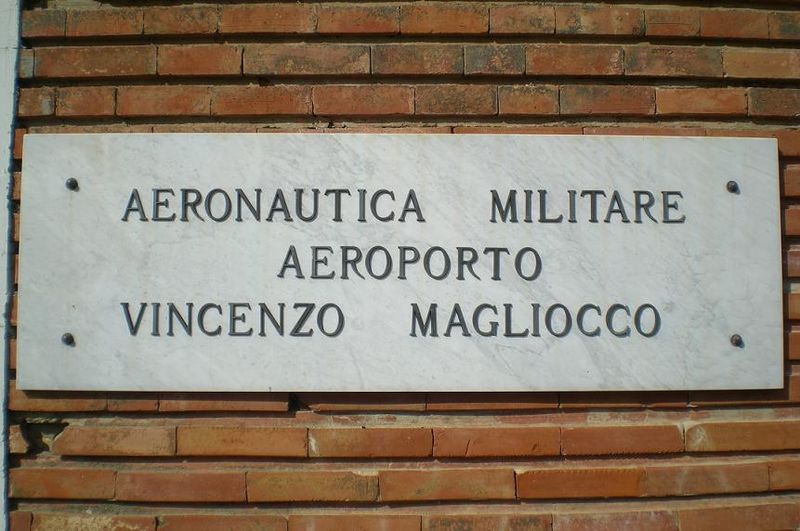 On 19 August 1981, the Spadolini Government offered the airfield to NATO as a BGM-109G GLCM missile base. At the time, the buildings of the base still were almost all bombed out, and the runway had small trees growing out of it. Some of the old buildings were refurbished for further use, but the presence of large amounts of World War II era ordnance meant most of the base was to be carefully demolished.
Subsequently a new base was constructed from the ground up, and renamed "NATO Base Comiso". 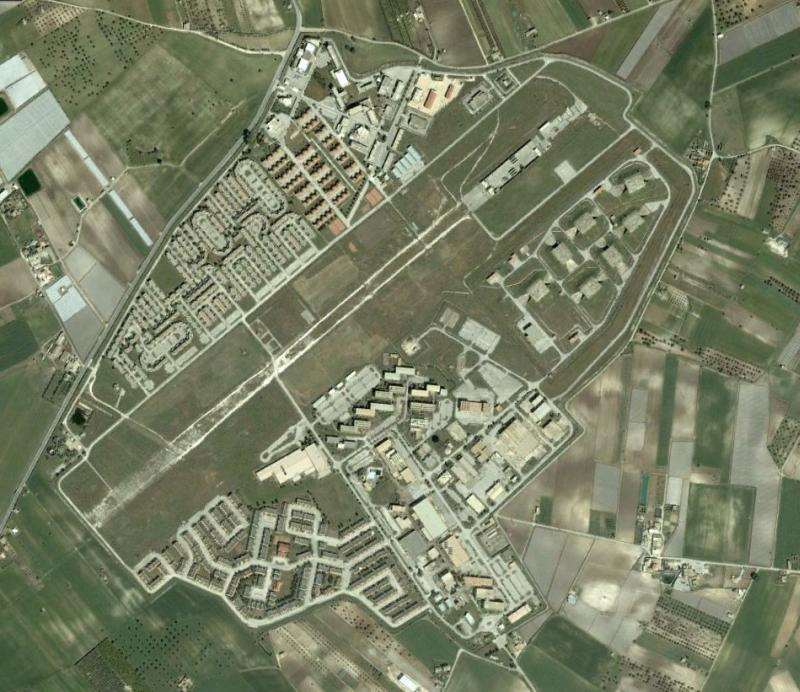 After spending considerable amounts on construction, the base had a permanent population approaching 2,000 and the initial NATO Ground Launched Cruise Missile force was operational in 1983. The first assigned millitary personnel arrived in April and shared the base with a small Italian Air Force contignent and a U.S. Navy construction office. During the summer of 1983 the base was subject to three large anti-nuclear demonstrations organised by the Italian Communist Party. The protesters soon lost interest however and only small incidents took place since. On 30 June 1983 the base went operational with 112 cruise missiles under the U.S. Air Force 487th Tactical Missile Wing and Italian Air Force. It thus became one of the main NATO bases in Southern Europe during the Cold War.
As a result of the Intermediate-range Nuclear Force Treaty signed in 1987, the Warsaw Pact dissolving and the Soviet Union collapsing, the base drew down and removed its last battery of cruise missiles in March 1991. It finally closed in the late 1990s, but came back to life for the Rainbow Mission (Italian: Missione Arcobaleno), to house 5,000 Kosovars during the war in former Yugoslavia.
The refugees were temporarily settled in the homes of the U.S. soldiers.

Refurbishment work to reactivate the airfield (Renamed "Mare Nostrum" when the design of the project began in 1998) began in 2004 and was completed in the winter of 2008. The project was born from a successful institutional collaboration between the ENAC, the Sicilian Region and the City of Comiso. The cost of 47.5 million Euros was approved by the Berlusconi government. The airport project involved the construction of a new runway of 2,460 meters (completed in March 2007) equipped with instrument landing system (ILS). Renamed to "Pio la Torre" on 30 April 2007, the airport was to serve the eastern side of Sicily and to relieve Catania-Fontanarossa airport. The first civilian flight was made on 30 April 2007.
For years, it was so far the only flight however, as local (Sicilian) politics did not allow opening of the airport yet. As a result a brand new and completed airfield (having been renamed back to it's original name Aeroporto di Comiso "Vincenzo Magliocco" in August 2008) was sitting idle for the past several years. In spite of this, the airport authorities continued to negotiate with airlines and charter companies to start commercial activities.
A video of the airfield can be viewed at the bottom of this article at AvioNews.com: Comiso airport, from national pride to national shame. 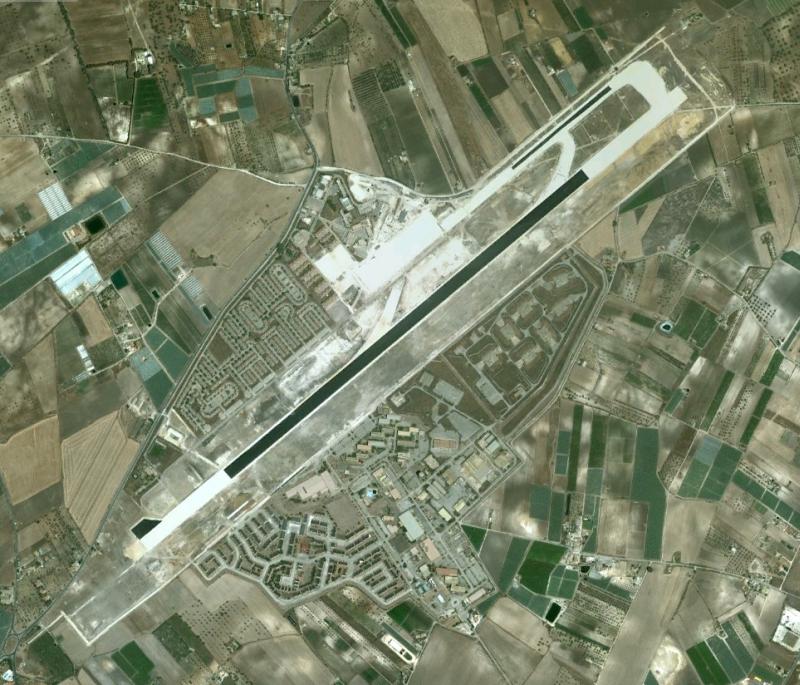 Comiso in 2006, showing the progress that had been made in rebuilding the old NATO Base back to airfield confuguration (Google Earth). 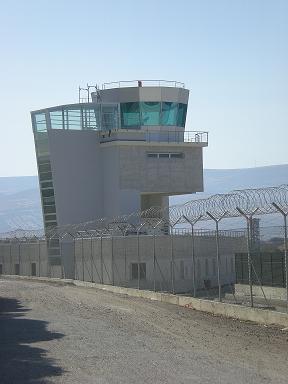 The brand new but unused control tower at Comiso in 2008, the year the new airport was originally scheduled to open. It had been standing idle until the summer of 2013 (Wikipedia). Comiso in 2010, showing the basically completed airfield sitting unused. The NATO Base (south of the runway) and the housing complex (southwest of the platform) are clearly recognisable (Google Earth).

Since 7 August 2013, the airport is operational. That day, Ryanair began daily services to the UK and Rome, and a two times per week service to Belgium. A small airline began offering services to Malta at the same time. Since late 2013, volcanic activity of Mt Etna has caused the airport to stand in for Catania-Fontanarosso airport. As a result, Comiso had handled 100,000 passengers by April 2014.

The NATO air base, located on the southeast side of the runway, is totally abandoned and empty. Weeds and unkept vegetation have been growing for the past 20 years. The buildings are empty but not vandalized, looking more or less like a time capsule, empty and unused. Several hundred military family housing units, built on the northwest side of the runway, have been standing vacant since the Kosovars left.