It was originally built in 1936 as an airfield for the French Armée de l'Air. It was not used by the Germans during World War II and returned to agriculture immediately after the war.
The airfields history restarted in 1950, when NATO, in the early years of the Cold War, recognised it had several problems when attempting to solve the air power survival equation. Planning for first strike survival in both conventional and nuclear wars had to be considered. NATOs primary operating bases were built on relatively small parcels of land with very limited dispersal space. Therefore it was decided to also build dispersal bases away from the primary bases to be used in the event of an emergency (war). Damblain was intended to be built as a NATO main operating base for the United States Air Forces, under the proposed name "Neufchâteau Air Base", even though that town is located quite some distance away. Alledgedly this was because the name of Neufchâteau was better known in a fregion of France where the US held many army bases during World War I. However, ultimately, the base was not to become a station of the USAF, possibly because lack of a major city nearby meant there would be difficulties housing dependent families. Therefore, Damblain became a "NATO Dispersed Operating Base", meaning it was to be used by the Armée de l'Air during exercises and times of tension.

No flying units were planned to ever be permanently assigned to Damblain, it was to be used for dispersal training only. However, it did require the same basic level of equipment as a standard air base. French security personnel were required to control base access, guard equipment, munitions and supplies stored at and near the facility, as well as to prevent vandalism. Damblain airbase was a fairly basic facility, with a parallel taxi track that could serve as a runway, a minimum of buildings and infrastructure, three dispersal areas or 'marguerites' and a single medium sized platform.

Construction began in 1953 and Damblain Air Base was designed for 3 squadrons totalling about 50 fighters on three large dispersal areas (called 'marguerites'). Construction was rapid and complete by the time the French Air Force flew its first NATO exercise (Shooting Star) from the base between 20 and 27 September 1954. The deployment exercise was followed immediately by "Indian Summer", during which the French flew their new F-84G Thunderjets of the 3e Escadre de Chassse out of Reims AB from the base. 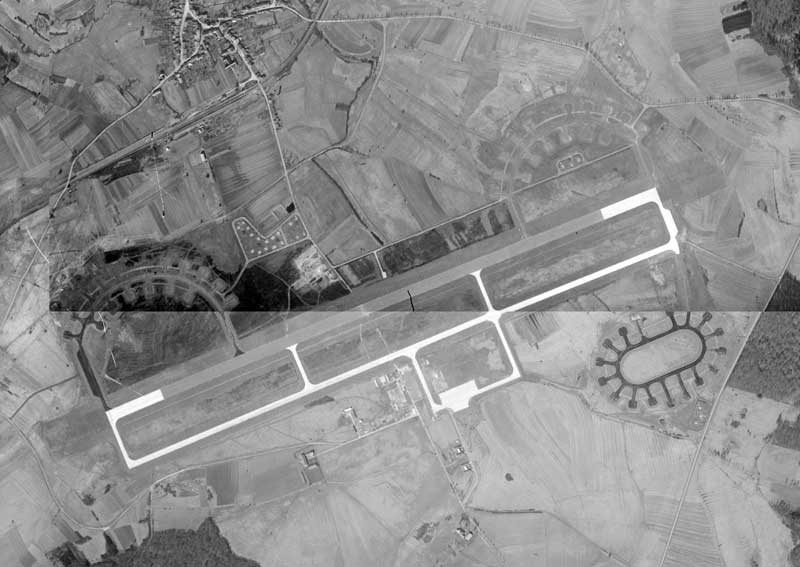 Composite photo of Damblain in March 1956. While complete and ready for use, this displays not the final shape of the airfield, as the runway overruns have yet to be built (IGN.fr) 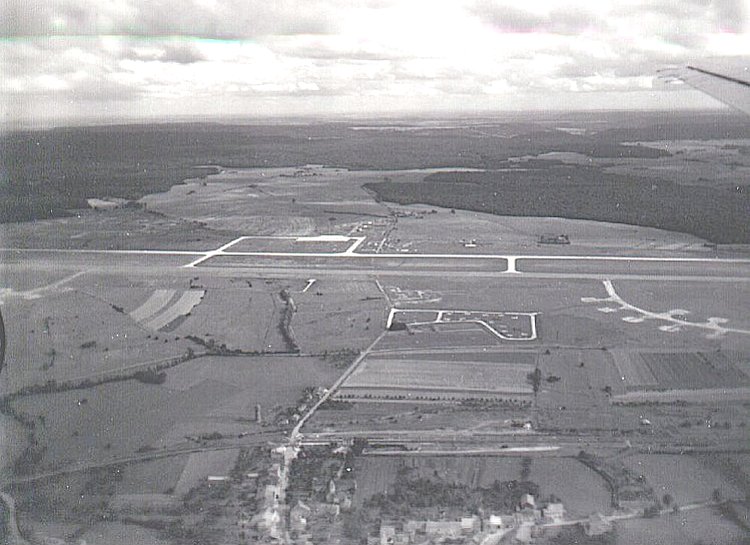 Damblain Air Base photographed from the north side in April 1958 (photo via grostenquin.org)
Later, between 1958 and 1961, the main runways of operational bases were lengthened to 10.000 ft class (around 3000meters) with the addition of so-called overruns and Damblain was modified accordingly.
The airfield was not deactivated and closed in 1966 after France - under president De Gaulle - left NATO, but instead it remained on strength of the Armée de l'Air. The airfield received runway lighting and approach lights from the east. In the 1980s, trees were planted to help camouflage the complex and one of the dispersal areas (southeast) received Aircraft Shelters. Two dispersal areas received earth embankments for added protection and preparations were made for the construction of buildings.
In August 1994, 1996 and in 2002, an evangelical gathering on the former military base provoked many reactions. Organized by the protestant Societée Vie et Lumière (Life and Light), the airfield saw some 40,000 people from all over Europe meet each other. 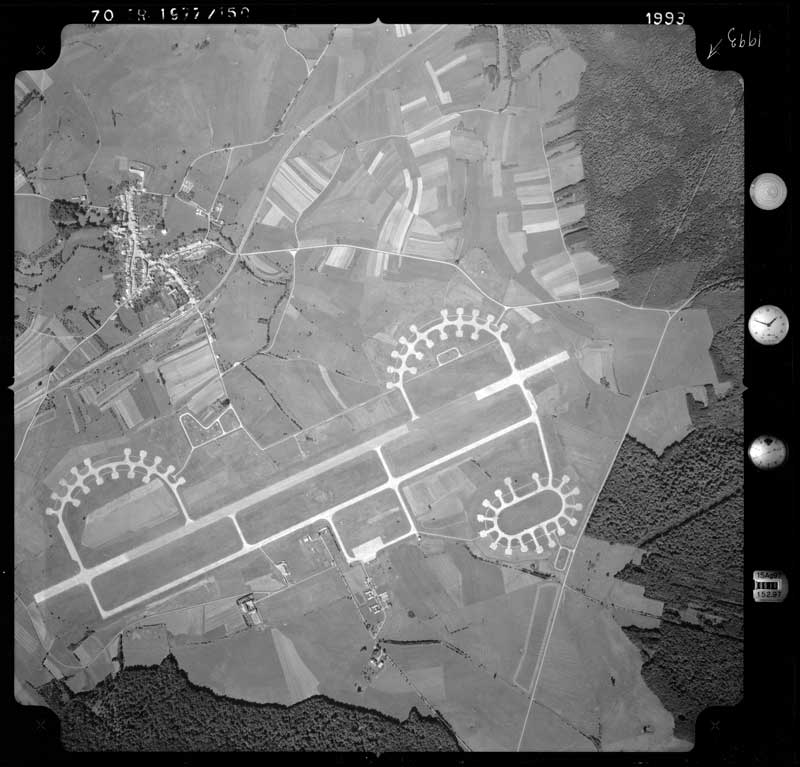 Damblain in September 1970. Clearly visible when compared to the 1956 photo are the overruns on the runway ends (IGN.fr) 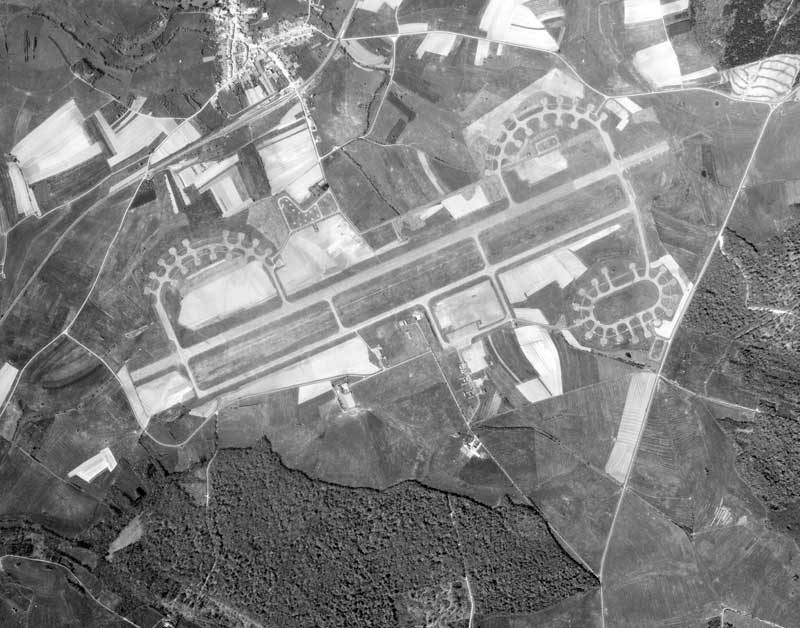 A small change with a major impact on the use of Damblain: the installation of landing lights on the east side of the airfield, visible in this photo taken in April 1975 (IGN.fr) 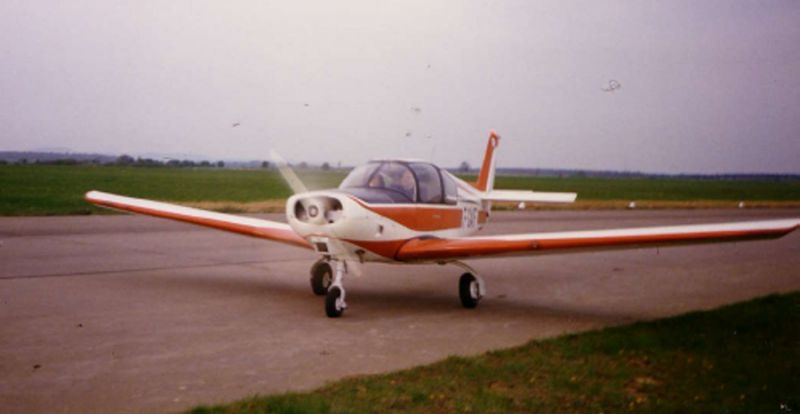 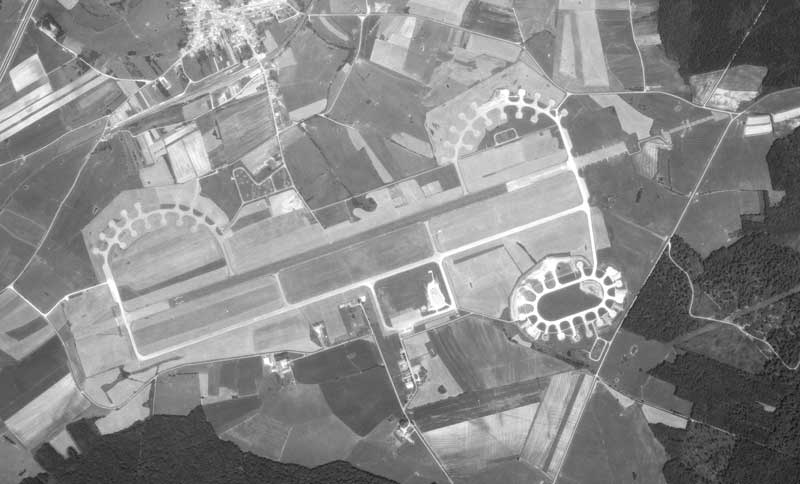 Earth walls were built on the southeast dispersal area and two small hangars were built there as well, as shown in this 1986 photo (IGN.fr) 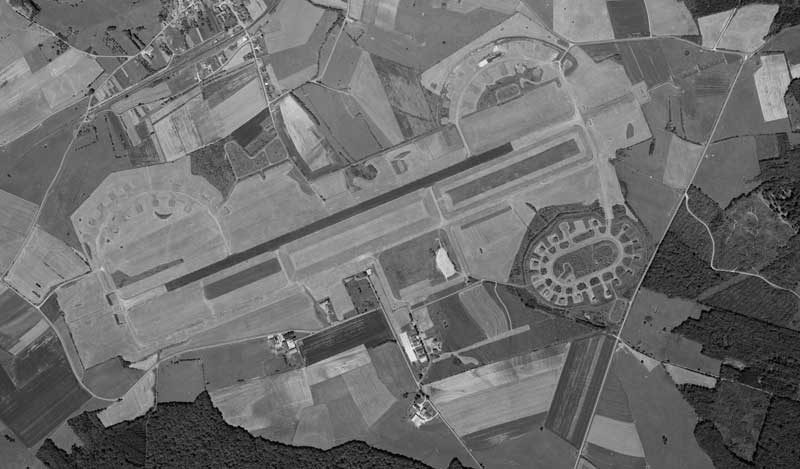 By June 1995, shelters had been built on the southeast marguerite and an earth wall had been laid on the northeast marguerite. Additionally, some minor construction had taken place at the logistics area south of the platform (IGN.fr) 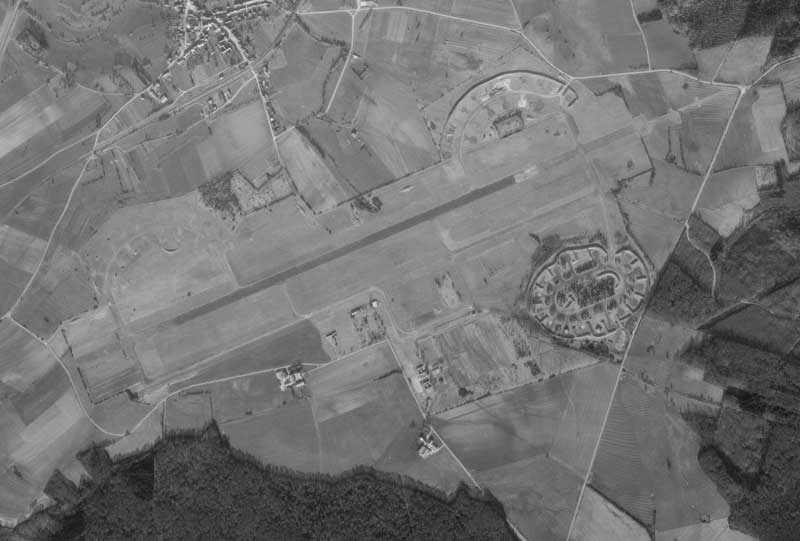 In this photo, the earth walls surrounding the eastern 'marguerites' are very recognisable. Clearly the runway approach lights on the east side are still recognisable features (IGN.fr). 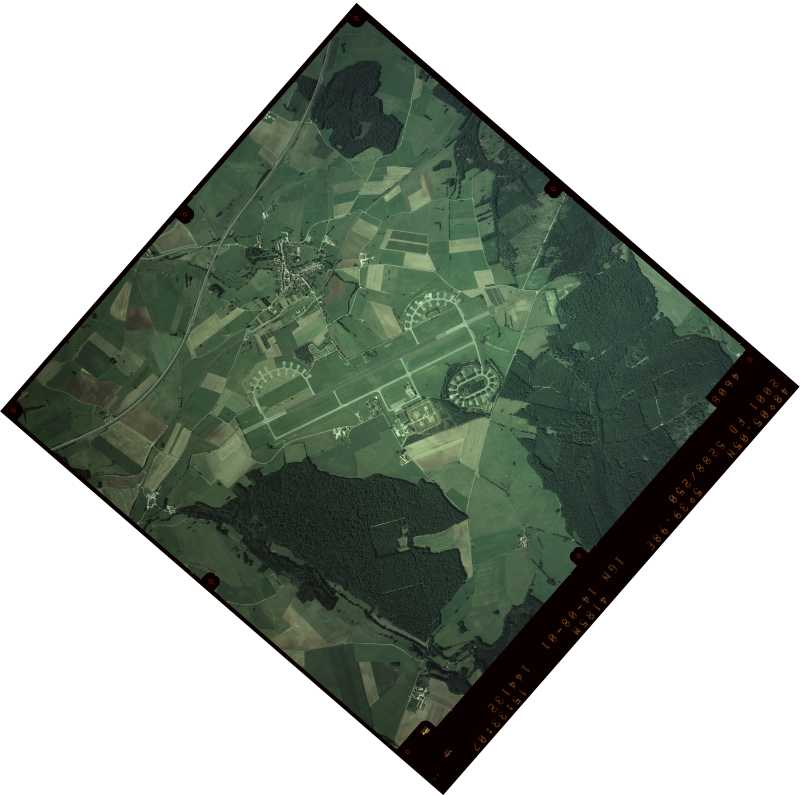 August 2001 photo, demonstrating that some form of construction had taken place at the logistics site south of the platform (IGN.fr)

In 2005, the airfield was disposed of by the military and acquired by the Conseil Général of Vosges (CG88) with the intention of renovating it for use as a commercial zone to help lift the unemployment in the region. From 2007, the airfield infrastructure was slowly dismantled, removing the local aeroclub (which had used the airfield for almost 40 years) in the process. Surprisingly, given the earlier construction of the airfield, the remains of a Gallo-Roman villa were found at the site during excavation work that had already begun.
Work on dismantling the airfield was halted in 2010 however, when it was found that the supposed candidate to start a distribution center at the site had not yet made any formal agreements and even worse: it formally announced to withdraw from the project to converted the airfield into an industrial zone. Work was soon after halted. That did not stop the Vosges Department from expelling the local flying club, however. As has happened frequently at other airfields in France this century, local, regional and national politicians closed the airfield without regards to their users or their investments. 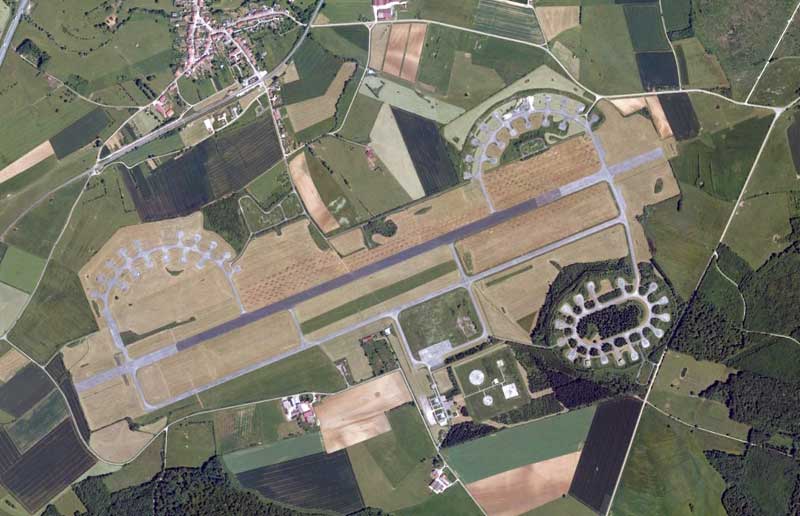 Damblain in 2006 a year after the Vosges department aquired the airfield and about a year before the airfield began to be demolished (Google Earth).

What remained of Damblain in 2015: its dispersals largely removed and only parts of the runway an taxitracks remaining. The beginnings of an industrial zone and a trainyard are appearing on the north side of the runway (Google Earth)