Doncaster airfield (also known as RFC Doncaster and RAF Doncaster, ICAO: EGCI) was an airfield 230 kilometers north-northeast of London.
The airfield opened in 1909 at the local racecourse to host the world's second air display (the first one had been in Rheims, France). All the world's leading aviators were present. The Daily Mail offered a £1000 prize for the first British pilot in a British aeroplane to fly a circular mile. Samuel F. Cody, not related to William F. (a.k.a. 'Buffalo Bill'), attempted to win the prize. He signed British naturalisation papers in front of the crowd with the band playing both the Star Spangled Banner and the National anthem. Unfortunately, he crashed his British Army Aeroplane No.1 whilst taxiing, the prize was taken by JTC Moore-Brabazon a few days later. 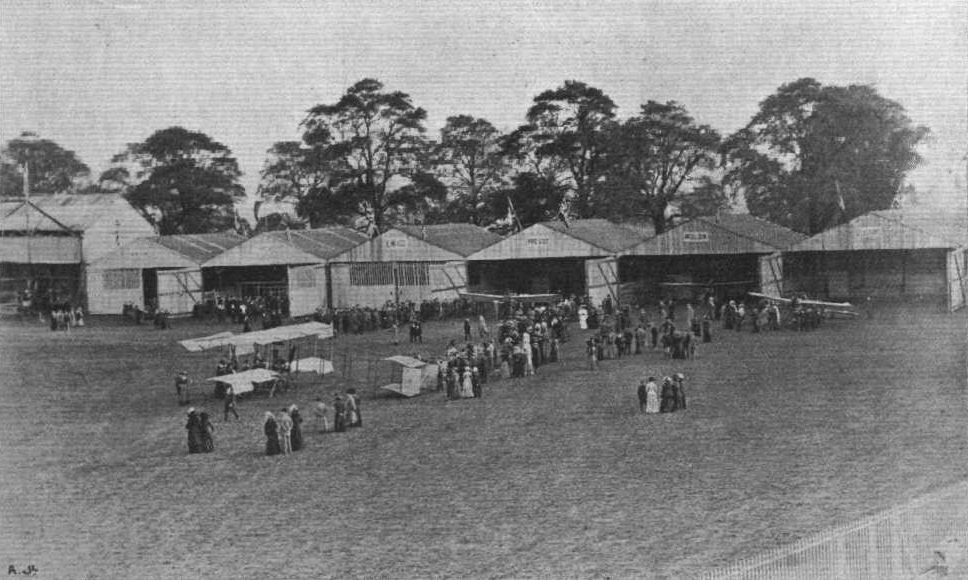 In 1916 the Royal Flying Corps based fighters of 15 Reserve Squadron at the airfield. From one of its flights, 46 Reserve Squadron was formed. The aerodrome moved off the race course to a newly built terrain next to it in 1916. This terrain developed into a proper airfield with three hangars which housed RFC Squadrons 41 & 49. Another unit, 82 Squadron Royal Flying Corps, was formed at Doncaster on 17 February 1917 to fly Armstrong Whitworth FK8 aircraft. That unit left for France on 20 November 1917. On 15 July 1918, 41 and 49 Reserve Squadrons were amalgamated to form 47 Training Depot Station (TDS) for single seat fighter training. Doncaster continued in this role for the remainder of World War I.
The station was not on the Air Ministry's permanent list, so the airfield was closed down within months of the war ending. As the Air Ministry did not own the land, the airfield buildings were put up for sale. Two of its three Belfast hangars were sold to a Sheffield motor manufacturing company for storage and assembly at Finningley. The third of the hangars stayed in place, mainly housing buses.

No photos or maps from this period have been located

In 1920, the national Government asked local authorities to assist in the formation of a chain of airfields. The scheme was planned so Great Britain would not lack behind other nations in the provision of civil air services. In England and Wales in 1932 there were only 11 Municipal Authorities with licensed aerodromes. Doncaster was one of another 11 towns that had purchased sites for development. Doncaster responded and with advice from Alan Cobham they opened an 'aviation centre' on 26 May 1934 . The airfield continued to develop. An international service was opened to Amsterdam on 1 July 1936. After long discussions with the Air Ministry, 616 (South Yorkshire) Fighter Squadron of the Royal Auxiliary Air Force was formed at Doncaster. On the opposite side of the aerodrome a new site was constructed during 1938 to accomodate their formation on 1st November 1938. This new site featured three Bellman type aeroplane sheds.
Shortly after the outbreak of war in 1939, the squadron went to its battle stations, where it played an honourable part in the Battle of Britain. After the departure of 616 squadron, its place was taken by the formation of 271 (Transport) Squadron, composed mainly of requisitioned civilian aircraft and obsolescent twin engined bombers. After having been re-equipped with Dakotas (RAF C-47s), the squadron moved south to take part in operation 'Overlord' (D-Day). Yet later they took part in the airborne invasion at Arnhem, during which Flight Lieutenant David Lord was awarded a posthumous Victoria Cross. Throughout the war the airfield was used for transport, conversion and diversion duties.
At the end of the war the airfield at Doncaster closed for a second time during 1945.

After the war C. L. Surveys took over two hangars and used them to convert Halifax and Anson aircraft for civilian use. In October 1947 9 Reserve Flying Training School formed at Doncaster to provide training for RAF Reserve pilots. Around the same time 24 Gliding School arrived from Firbeck to train the Air Training Corps cadets. 24 Gliding School was disbanded in January 1954.
In 1960 civil aviation returned to Doncaster, although this time only as a gliding club. The South Yorkshire Airport Company signed a ten year lease of the airport in 1967. The following year the Doncaster Gliding Club hosted the National Gliding Championships. With the reopening of Doncaster airport the South Yorkshire Flying Club was formed in 1976. The airport terminal and control tower burned down in the late 70s. Flying mainly Cessna 150 and 172 aircraft, the club was formed by members taking shares and running it on a non profit basis. The club stayed until the airfield closed after -on Christmas Day 1992- Peter Skinner, Director of the Doncaster Aero Club, flew the final flight from Doncaster Airport. 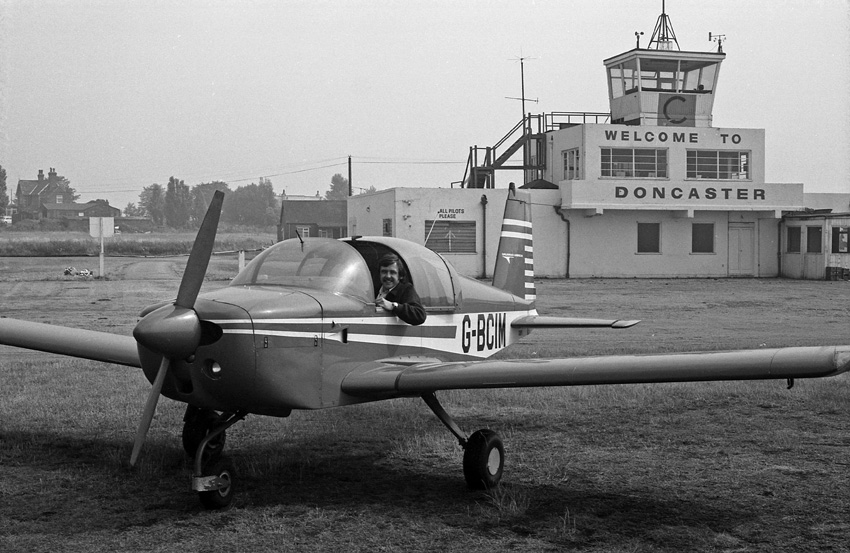 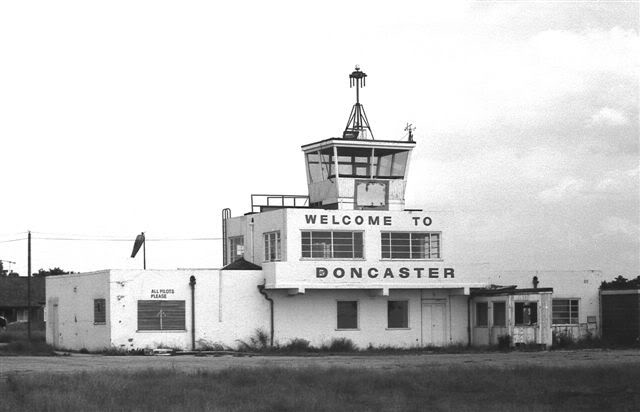 Doncaster airfield, the Flying Club hangar on the southeast side of the airfield in 1990 (AirfieldInformationExchange).

The Lakeside area has seen considerable redevelopment since the airfield closed. Extensive landscaping and the introduction of numerous retail outlets and leisure activities have caused very little of the original Doncaster airport to survive. Only the buildings currently occupied by the South Yorkshire Aircraft Museum remain. Vandalism caused other airfield buildings to be demolished. The site of the civilian air club was built over with a residential area. 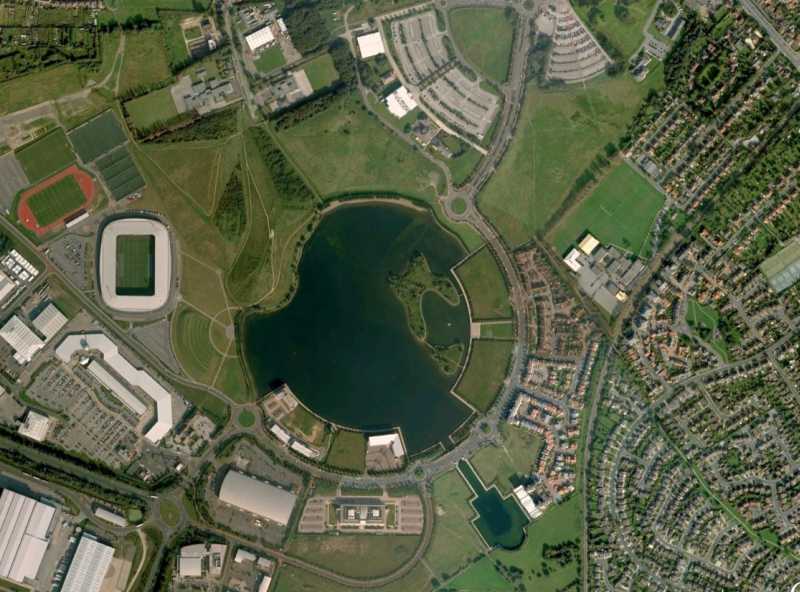 The site of the former airport photographed in 2008 (Google Earth)