Elvington airfield (RAF Elvington, ICAO: EGYK) was an airfield 275 kilometers north of London.
Originally, the airfield was built as a satelllite landing ground with grass runways. But directly after a gravel taxiway system was laid out in 1940, the airfield was immediately upgraded with hardenend aircraft dispersals and runways. In all, 38 dispersals were built, along with three runways: 02/20 and 14/32 measuring 1,400 yards in length, while the main 08/26 measured 2,000 yards.
The station was first occupied by 77 Sqn. with Armstrong Whitleys, which arrived in the fall of 1942. After a brief period of retraining and conversion to Halifaxes, the squadron joined main bomber force operations over Germany in the final weeks of the year and continued to fly from Elvington until May 1944. When RAF Elvington was selected as the base for two new heavy bomber squadrons manned by Free French personnel flying Halifaxes, 77 Sqn was moved to RAF Full Sutton. The Free French squadrons, 346 "Guyenne" and 347 "Tunisie" Sqn, formed at Elvington just before the summer of 1944 and both became operational a month later. The last Free French operations from Elvington took place late in April 1945, but both squadrons did not leave for their new home base Bordeaux until October. During their operations, the French had lost 30 Halifaxes as missing in action.
A major Luftwaffe intruder operation ('Unternehmen Gisela') on the night of 3/4 March 1945, resulted in a Halifax being shot down while returning to Elvington. One of the Luftwaffe Ju88Gs involved in the operation (D5+AE) struck trees and crashed while attempting to strafe the airfield, killing killing all 5 crew, as well as a farmer (Richard Moll), his wife and his mother. The war ended just 9 weeks later, making this is probably the scene of the very last Luftwaffe aircraft crash on British soil.
In total, Elvington lost 128 Halifaxes to operational causes (including crashes), 45 of them from the French squadrons.

In the weeks following VE-Day, the French-manned Halifaxes were employed in transporting military personnel and material across liberated Europe. In October they were officially turned over to the French Air Force, taking the aircraft with them. 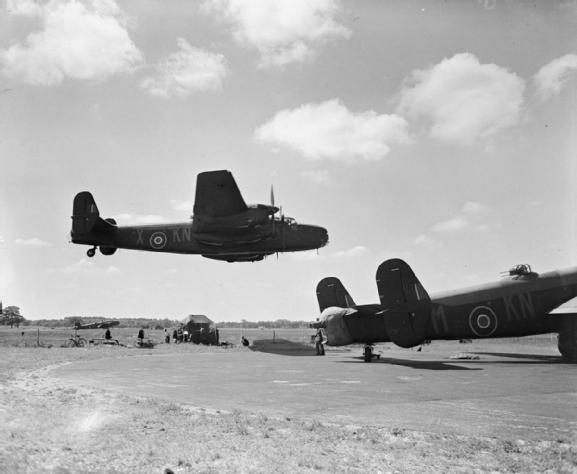 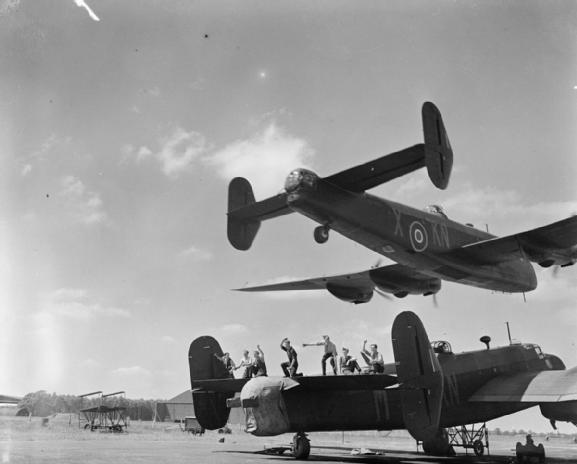 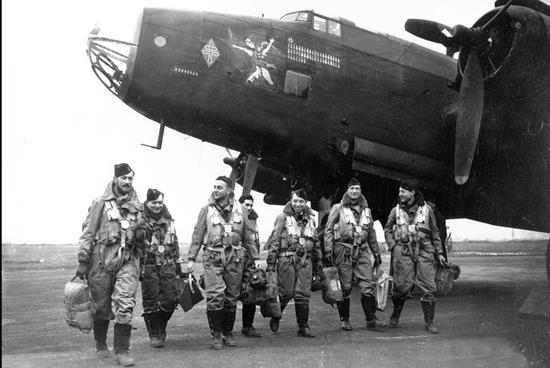 French crew of Halifax III 'La Marseillaise' of 346 Sqn (GB II/23 "Guyenne") walking from their bomber at Elvington in 1944 (defense.gouv.fr).

A Handley Page Halifax B Mark III of No. 347 (Free French) Squadron RAF, taxies to its dispersal at Elvington, Yorkshire (IWM, on the IWM Non Commercial Licence).

After their departure, Elvington was used by No. 14 Maintenance Unit to store bombs. Eventually it went back to caretaker status. In 1953 Elvington was one of several redundant airfields passed to the USAF for updating as reserve bases for B-36 bombers. The following year (1954) US engineer organisations extended and strengthened the main runway to 3,265 yards, built a parking ramp and new taxiways. The other old runways and much other wartime concrete were broken up for use as hardcore.
With lessened East-West tension and a change in strategy, the USAF withdrew its personnel in 1958, although the airfield remained in reserve status. The USAF had spent £4 million on an airfield that never became operational as a SAC base. Elvington became a relief landing ground for RAF training establishments, the long runway provided a useful safety margin for student pilots. In the early 1960s the Blackburn Aircraft Company (today part of British Aerospace) used the runway for test flights of the Blackburn Buccaneer. In 1968 this runway was also used for Hovercraft trials.
On 3 October 1970 Tony Densham drove the Ford-powered "Commuter" dragster to a record at Elvington, averaging 207.6 mph (334.1 km/h) over the Flying Kilometre course. The new record broke a 43 year old record.
In the 1970s, Elvington's technical and administrative sites were acquired by an enthusiast group who formed the Yorkshire Air Museum. Over the following decades, the organisation developed into one of the UK's premier air museums. 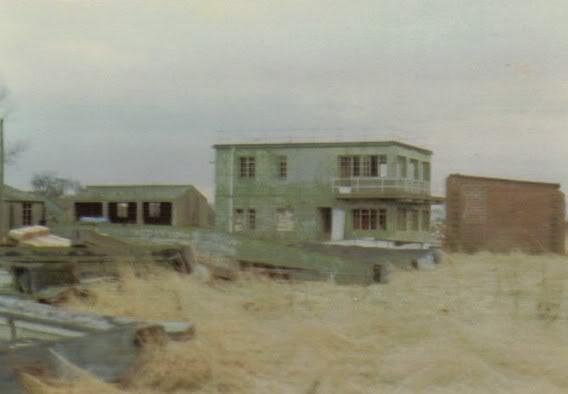 It is noted particularly for its splendid effort in re-fabricating the only externally complete example of a Halifax in existence. In 1990 Elvington hosted an attempt to match the speed record run of the Sunbeam Tiger motor car, originally driven by Henry Segrave on 21 March 1926. The re-run at Elvington on the two mile (3 km) runway was recorded at 159 mph (256 km/h).
Elvington retained its status as an RAF relief landing ground and was used by the RAF flying training schools at RAF Church Fenton and RAF Linton-on-Ouse until the airfield was finally closed in March 1992. To give much needed protection for the exhibits, a T2 hangar (removed from Kemble) was erected on the museum site in 1995. The airfield has been owned by Elvington Park Ltd since it was sold by the Ministry of Defense in 1999.
The current British Land Speed Record holder is Vampire, driven by Colin Fallows, who hit a speed of 300.3 mph (483.3 km/h) on 5 July 2000 at Elvington.
On 20 September 2006 Elvington Airfield was the location of a serious crash involving BBC Top Gear presenter Richard Hammond. His jet-powered car crashed while travelling at 280 mph (450 km/h) due to an almost instantaneous blow out of the right side front tyre. Hammond received serious brain injuries, but made a full recovery. 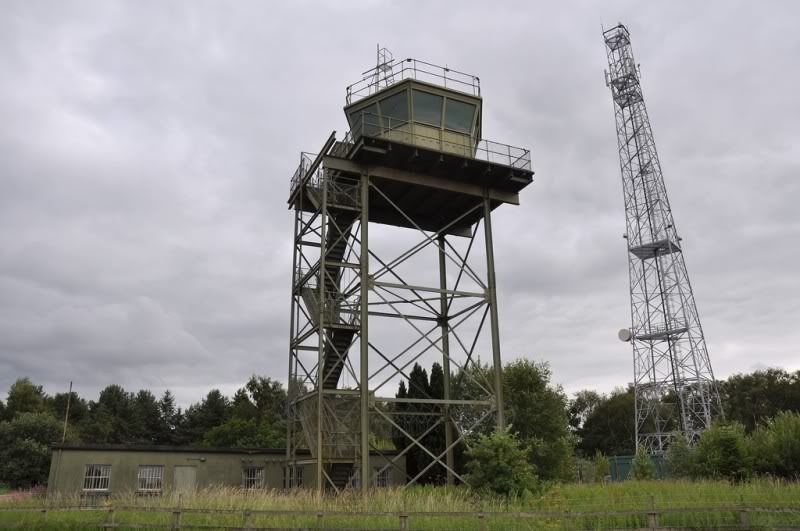 Being in a designated green belt area for York, no development is allowed of the airfield site, the runway remaining intact. The adjacent buildings and World War II control tower have been restored and serve the Yorkshire Air Museum. The USAF control tower built in the 1950s is still standing, but not owned by the Museum. It belongs to Elvington Park Ltd. and is not open to the public.
Although it is no longer an airfield, once a year Elvington hosts a privately sponsored airshow. It incorporates modern military aircraft and classic aircraft as well as displays by the Red Arrows and the Battle of Britain Memorial Flight. 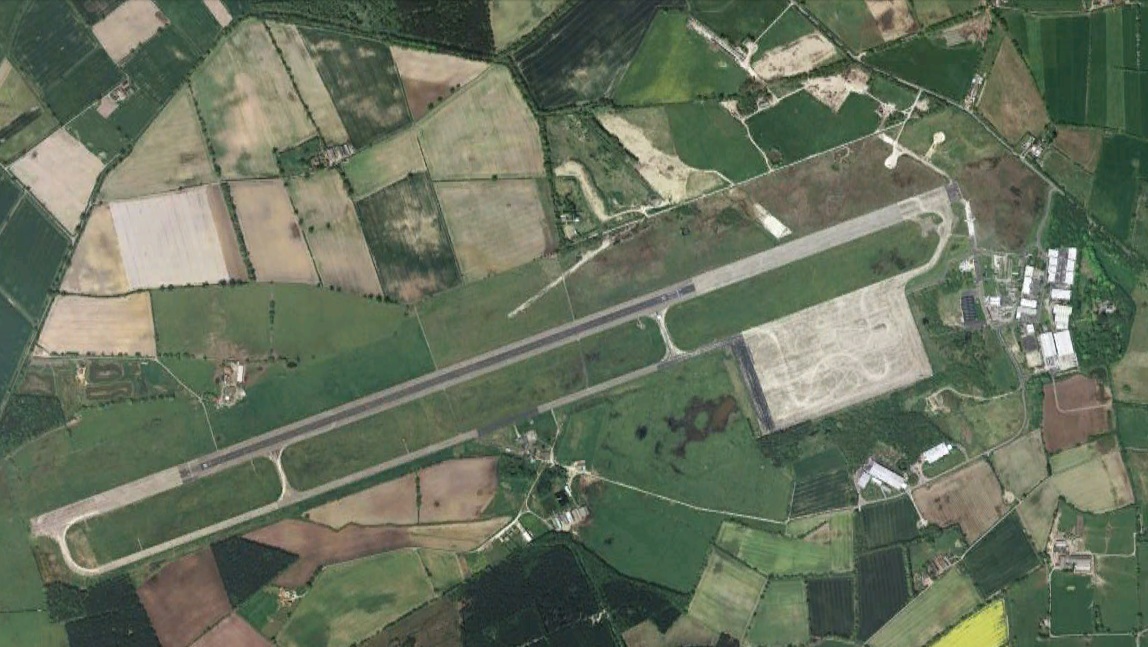 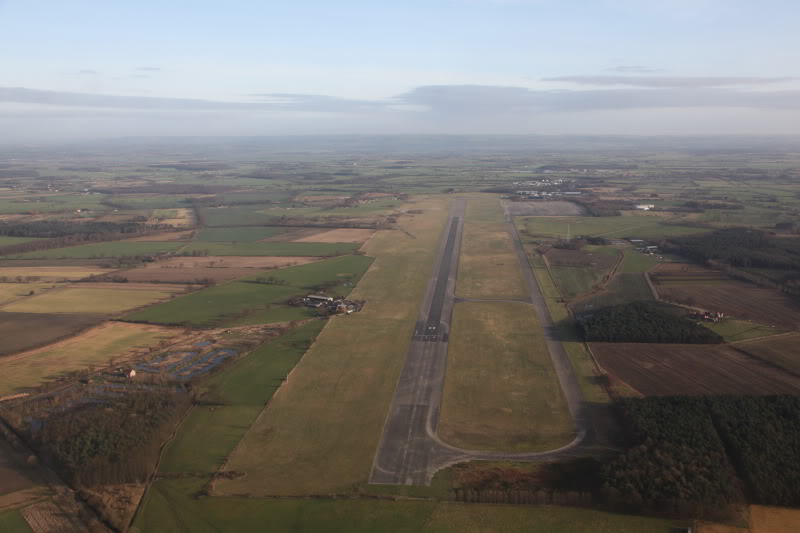