Eschborn airfield (German: Flugplatz Eschborn, also known as Fliegerhorst Eschborn, or Advanced Landing Ground Y-74 Eschborn) was an airfield 9 kilometers from the Frankfurt am Main city center.
Preparation for the construction of the airfield began in 1937.
The majority of the grounds needed were not acquited until 1939/1940 however.
Although classified as highly secret, it was soon clear to the local inhabitants that the construction taking place was for an airfield called Eschborn.
Its name was derived from the facts that is was largely located on Eschborn territory and its main entrance was located near the town.
Initially the airfield did not have a runway, but instead it used a large flying field.
To keep the grass short a small herd of sheep was employed.
Air traffic control and five large hangars were all built from brick near the flying field.
Large concrete platforms were built in front of them.

Honorary guard for the soldiers that died in a training accident in 1941 (luftfahrtsammlung-fiebig.de).


The military airfield initially served for training of assault cargo-gliders.
Training with DFS-230 gliders began in the summer of 1941.
The gliders were taken into the air by He-45, He-46 or Arado Ar-65.
In the spring of 1942 the glider flying school (Fliegerschule (S) 1) was renamed a replacement group (Ergänzungsgruppe (S) 1).
A group that was partially built from this group was sent to the Easstern Front in January 1943.
From 1943 the airfield was regularly used by elemants of JG53 'Pik-As', JG27 or Stab./JG300.
On 15 August 1944 the airfield was attacked by 65 USAAF B-17s, guarded by 47 P-51 Mustangs.
No German fighters were seen during the attack.
In 4 minutes the bombers had dropped 187 tonnes of ordnance: 200 high explosives and 250 incendiaries.
The airfields commandpost was completely destroyed, two hangars , oiltanks and the flying field were damaged.
Nearby, 44 homes and 20 farms were destroyed, a woman died, and a man was severely wounded.
The strike was part of a larger attack on several airfields throughout Germany.
Like other similar units, the Ergänzungsgruppe (S)1 was deactivated on 9 September 1944, and its personnel redistributed to army and parachute units.
As a result the airfield was left without assigned air units.
The airfield did not see action again until the US Army captured the airfield on 30 March 1945.
They prepared the airfield in a hurry, so it was ready for operations by the 367 and 371 Fighter Groups on 9 April 1945.
The fighter group attacked targets in southern Germany from the airfield until the end of the war on 8 May 1945.
At the edge of the airfield, the Americans built a POW camp for about 1000 prisoners.
The prisoners were used to build a 1600 meter runway at the airfield, and later to rebuild the Rhein-Main airfield.
The Eschborn prison camp existed until spring 1946, when the german soldiers were finally released to return home. 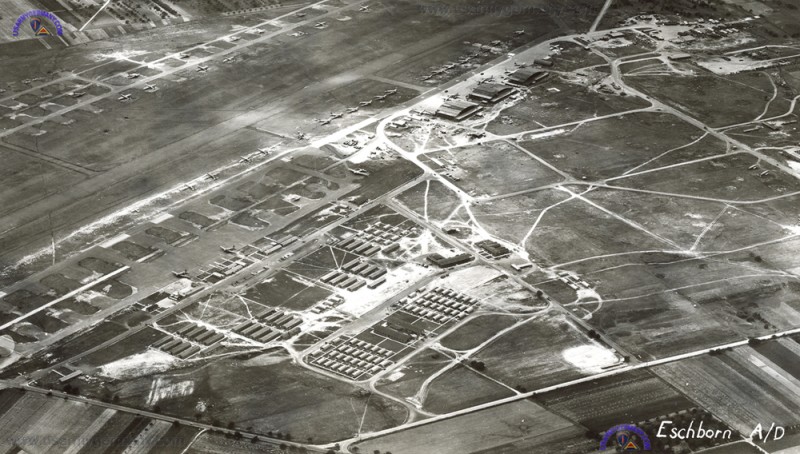 Frankfurt-Eschborn in 1946, with many USAF transports (mainly C-47 Skytrains) on its dispersals (usarmygermany.com).


Under U.S. control the base received the designation Y-74 Frankfurt-Eschborn.
Initially it was the only usable airfield in the Frankfurt area.
As a result it was the logical place for General Eisenhower to fly from his wartime headquarters in nearby Kronberg.
The base became home to the 441 Troop Carrier Group and from 1946 the 61 Troop Carrier group.
Once Frankfurt Rhein-Main was reasonably repaired the airfield rapidly lost in importance.
Its assigned flying units were withdrawn in 1947, but it remained in use as a maintenance and repair facility.
On the no longer used southern half the German Mail (Deutsche Post) installed a radio station for telephone connections to the southern hemisphere and North America.
Numerous antennas were built on the former runway, which remained until 1970.
US Army engineer units set up on the rest of the terrain and remained throughout the Cold War.
They renamed the former airfield 'Camp Eschborn'.
The last unit at the former airfield was withdrawn after the 1991 Gulf War, on 15 October 1991.
The property was returned to the federal German Government. 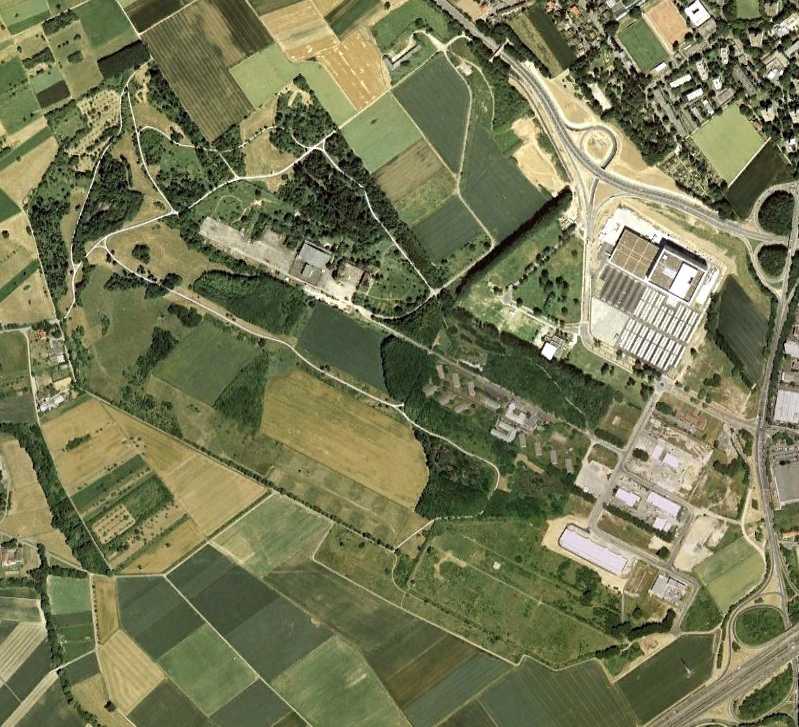 
Today only one hangar remains, in a very derellict state.
The foundation of a second can still easily be found.
The former airfield was turned into the Arboretum Main-Taunus.
From aerial photography large sections of the former airfield are still recognisable however.
Parts of the former military base are being redeveloped into an industrial estate. 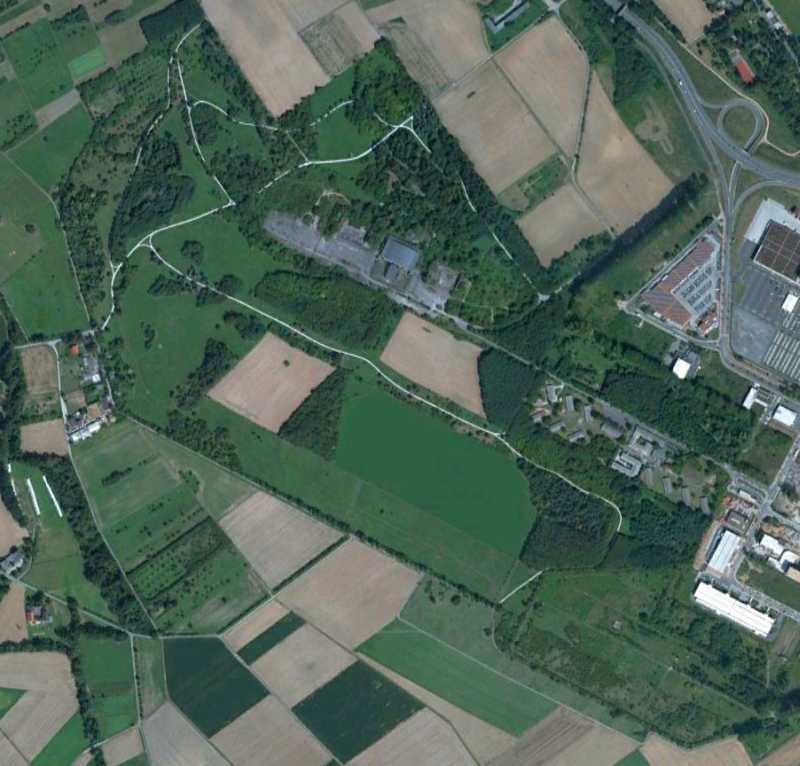