Frunze airfield (Rusian: Центрального аэродрома им.Фрунзе, English: Central Aerodrome Frunze,  better known as Khodynka Airfield (Ходынки)) was an airfield in Moscow, Russia.
The airfield was founded on 17 June 1910, when the Society of Aeronautics announced the positive decision of the Moscow Military District headquarters to allocate land for the airfield. The official opening took place on 3 October 1910, in the presence of the military leadership and many Russian pilots. Construction of the airfield was paid for by donations from aviation enthusiasts for a runway and hangars for six small airplanes.
In 1911, pilot Alexander Vasiliev landed his Bleriot XI there, becoming the only one to finish of 11 pilots who started a 453-mile race from St.Petersburg to Moscow.
By order of the Russian Air ministry the airfield became the contries first research and test facility.
On 3 May 1922 the Central Aerodrome started to operate the first ever Russian international flights on the route Moscow - Königsberg - Berlin. On 15 july 1923 the first regular domestic passenger flights Moscow - Nizhny Novgorod took place, which took 2.5 hours over the 420 km flights. They were carried out in a four-seat monoplane AK-1. Due to the increased volume of work the airfield was transformed again to become the scientific testing institute of the Air Force of the Red Army.
Central Airport became the first in the USSR to have a terminal building (in November 1931).
Starting in the 1930s, the airfield played annual host to Aviation Day festivities, held on the third weekend in August. It was reconstructed in 1936, to include a new concrete runway. During this time the airfields civilian operations were diverted to the new Moscovian airfield Bykovo and the test fligts to Podlipki.
The airport received its own metro station in 1938.
Leading aircraft design bureaus had ther offices at the airfield, such as Sukhoi, Mikoyan, Ilyushin and Yakovlev.

The terminal building in the 1930s (forum-avia.ru). Moscow Central Airfield, photographed by the Luftwaffe in July 1941 (forum-antikvariat.ru, rotated to show the proper north)

After World War II only three aircraft manufacturing plants were left at the airfield: Plants number 30, 51 and 240.
By 1948 most scheduled flying had been transferred to airfields around Moscow, notably Bykovo and Vnukovo. After that year the main pupose of Central Airfield was the testing of new aircraft. The most active operator was Plant 30. In the 1950s it tested the Il-12, Il-14, bombers and the Il-28. Their first flights usually took of and landed at the 345° runway. Between 1959 and 1978 Ilyushin built and tested the Il-18 passenger aircraft, as well as the Il-20, Il-22 and Il-38. Their first flights took off heading 09 and landed 27. 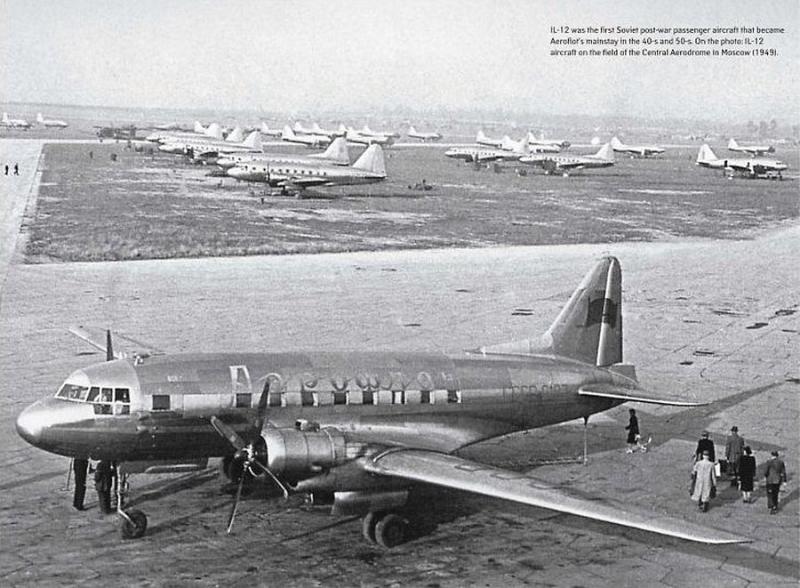 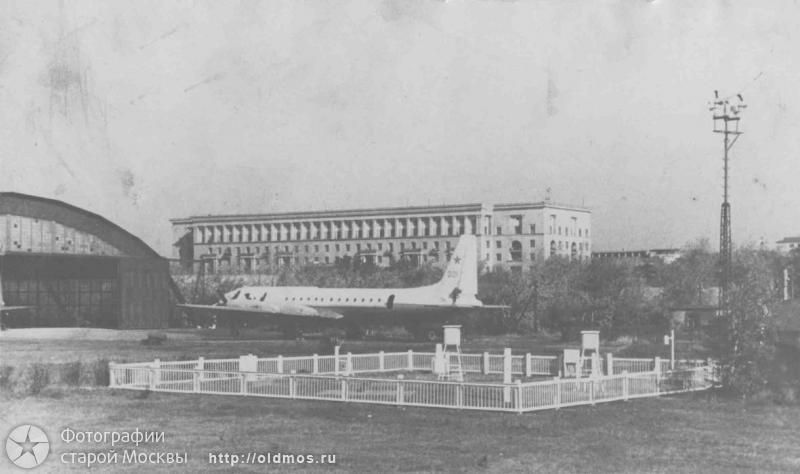 An IL-18 passenger aircraft at the Central Airport Frunze (Khodynka). In the foreground - a platform with meteorological equipment, in the background - house number 44 on the Leningrad Prospect (oldmos.ru). 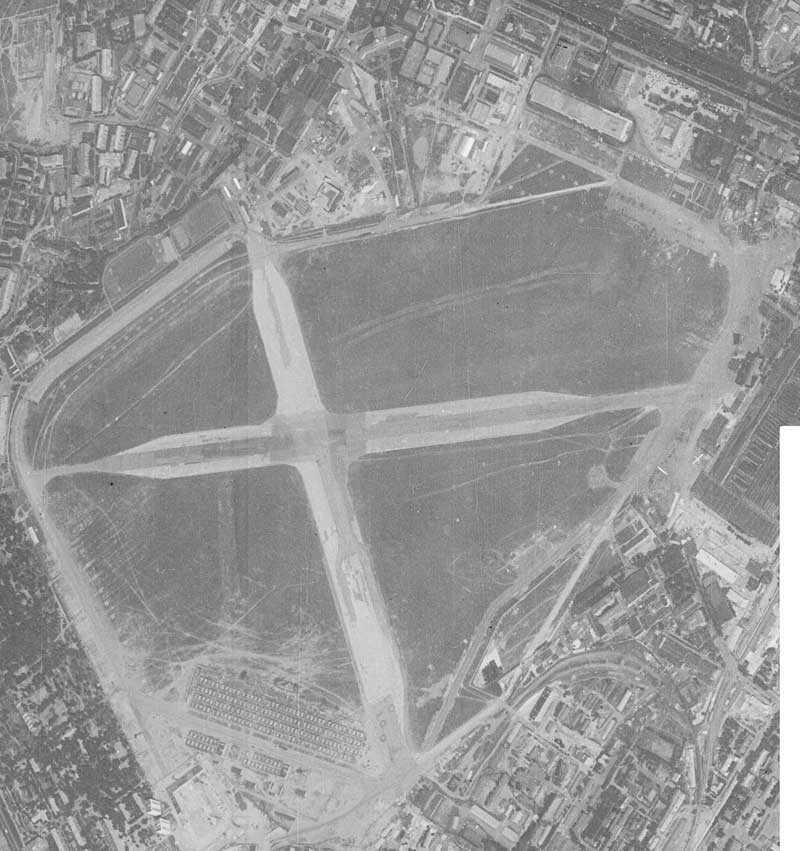 Declassified US satelllite picture of Khodynka, believed to have been shot ca. 1966 (avsim.su).

From 1960 until 1971 the airport doubled as a helicopter terminal with scheduled flights to Vnukovo, Domodedovo and Sheremetyevo.
In 1971 the airport witnessed the first flight of the Il-76. Five years later the Il-86 took off for the first time, the Soviet Unions first widebody airliner. Both used the 09/27 runway towards Kuusinen Street. From the late 1970s however, with the city creeping in on the airfield, the airport rapidly lost in importance. The number of flights diminished sharply, although in the 1990s two new aircraft were tested from the airfield: the Il-96-300 and the Il-114.

The final aircraft to take off from the airfield was an Il-38 'May' for the Indian Navy on 3 July 2003. The airport closed and was struck from the list of airfields of the Russian Federation. Decommissioned aircraft and helicopters (most of them prototypes) were parked on the runway. 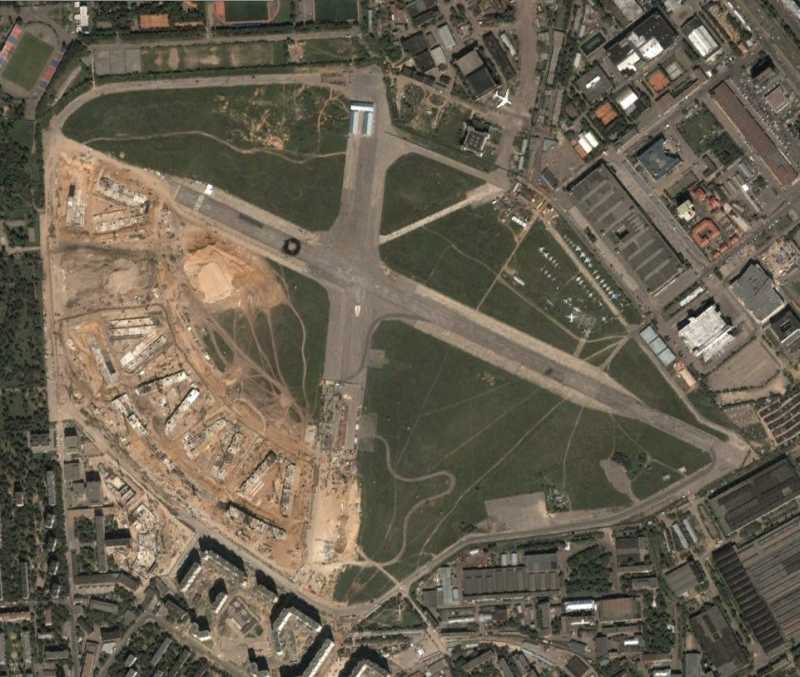 August 2003, only 3 months after the last aircraft had taken off from the airfield (Google Earth).

Although the central part of the airfield is still owned by the Russian MoD, many high rises have been built at the airfields perimeter. The central parts of the runways are still present, and are now used to display the aircraft that were stored at the airfield in anticipation of the planned Khodynka Museum of Aviation. 3 design bureas still have their offices, hangars and plants around the airfield: MiG, Sukhoi and Ilyushin. The old terminal still exists but has been converted for office uses. The new terminal is now the shopping center 'Aviacity'. 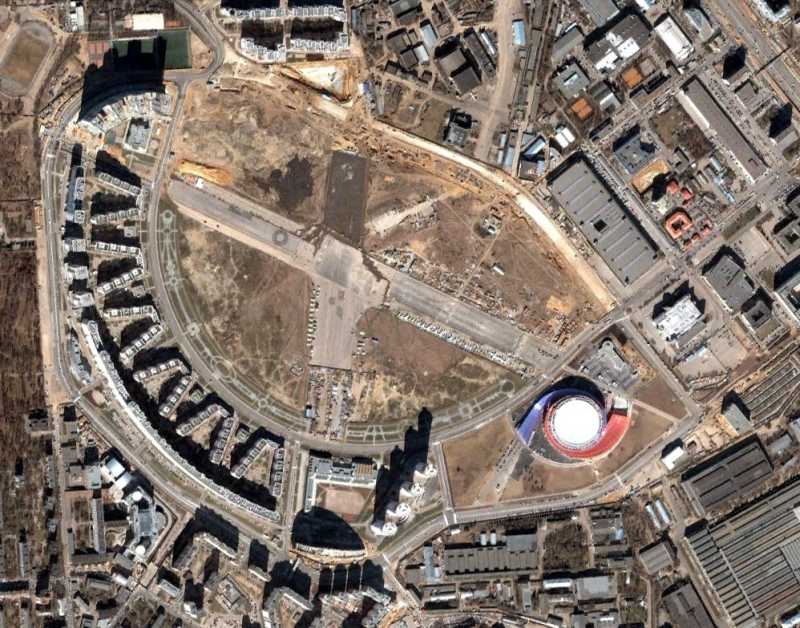 May 2007, all the stored aircraft have been moved to the former runway (Google Earth) 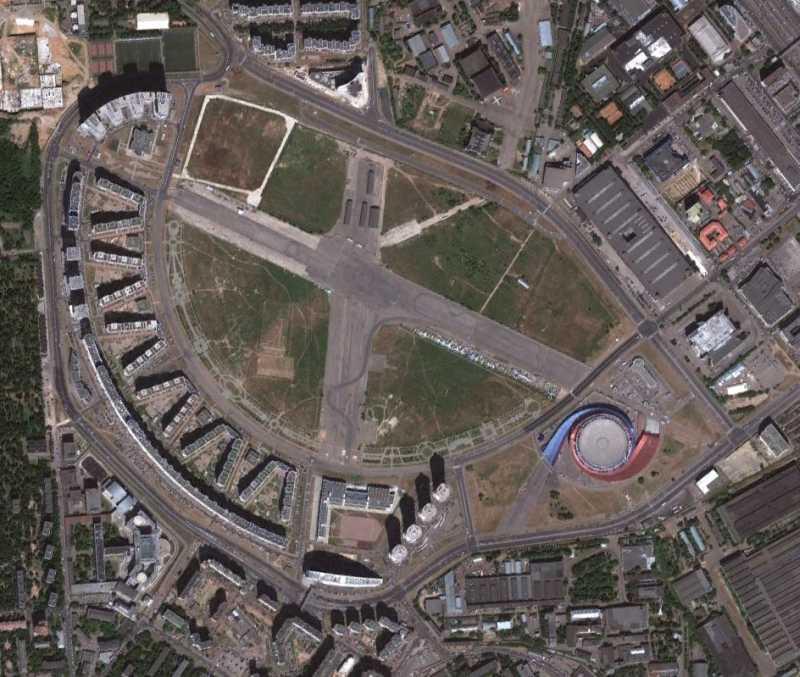