Full Sutton airfield (RAF Full Sutton, ICAO: EGNU) is an airfield 280 kilometers north of London.
The airfield was built as a class A airfield from 1943 and was one of the last World War II airfields when it opened in May 1944. It featured 3 concrete runways and 30 parkings. Facilities were available for 1800 RAF personnel.

When the station opened in May 1944 it became the home base for Halifaxes of 77 Sqn., which had to move out of its previous airfield Elvington to make room for an all French establishment. They flew from the airfield from mid May 1944 until two weeks before the end of the war. During its relatively short World War II carreer, the airfield had to list 95 Halifaxes as having failed to return. At the end of hostilities, the Halifaxes were traded for Dakota (RAF name for the C-47) transport aircraft and 77 Sqn became part of Transport Command. They moved to Broadwell by the end of August 1945.

Many other wartime stations in the area were soon placed under Care and Maintenance after VE-Day. Full Sutton was retained for flying however. In November 1945 231 Sqn was formed at the airfield to train on Lancastrian transports. The squadron remained until April 1946 after which activities at RAF Full Sutton slowly subsided. The airfield fell to Care and Maintenance in the spring of 1947.

Full Sutton re-opened as a training facility in 1951 under 104 Refresher Flying School as a result of the war in Korea. On 26 Feb 1952, a Meteor-T7 (WF831) from Full Sutton undershot an approach and collided with a goods train when it ran onto the railway track southwest of the airfield. Fortunately the aircraft smashed into a waggon full of sprats and both crew members escaped. Sadly the instructor died in another crash just under two months later. The Refresher Flying School remained here until the mid-1950s, after which it was earmarked for USAF occupation should the Cold War become hot. 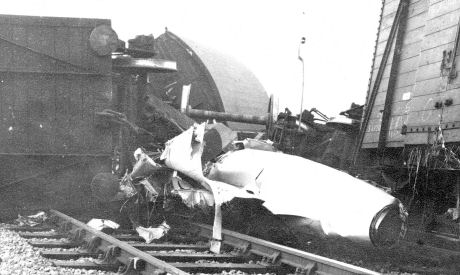 Results of the 1952 collission with a train just off base (pocklingtonhistory.com).

During 1958 the BRSCC organised four races on the airfields runways and perimeter roads. Jim Clark was among the winners at the first event. His first D-type race on the airfield circuit at Full Sutton earned him a place in the record books as the first driver to lap a British circuit at an average speed of over 100 mph in a sports car. The circuit was Britain's longest at 3.2 miles (5.1 km), but the races drew few crowds and the BRSCC soon switched to Rufforth Circuit the following year.
In April 1959 a Thor missile installation under the charge of 102 Sqn arrived at the airfield. 102 Sqn remained at the airfield for four years after which it went the way of all Thor units: it was disbanded. The disbandment of 102 Sqn marked the end of the RAF-era at Full Sutton. 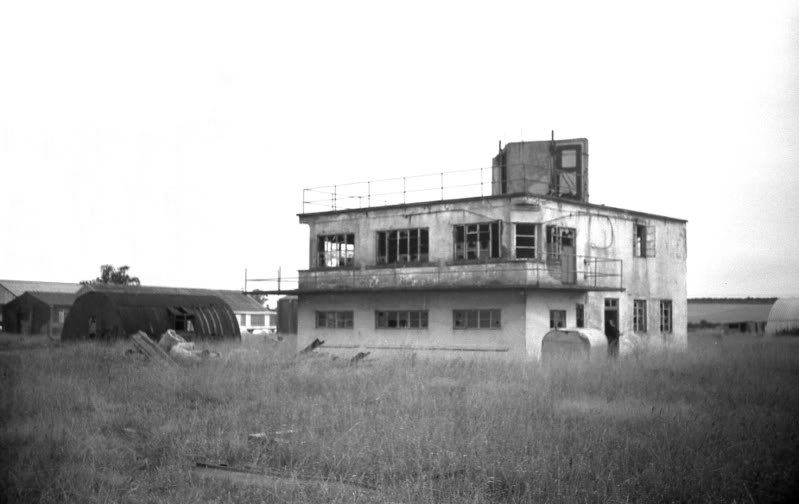 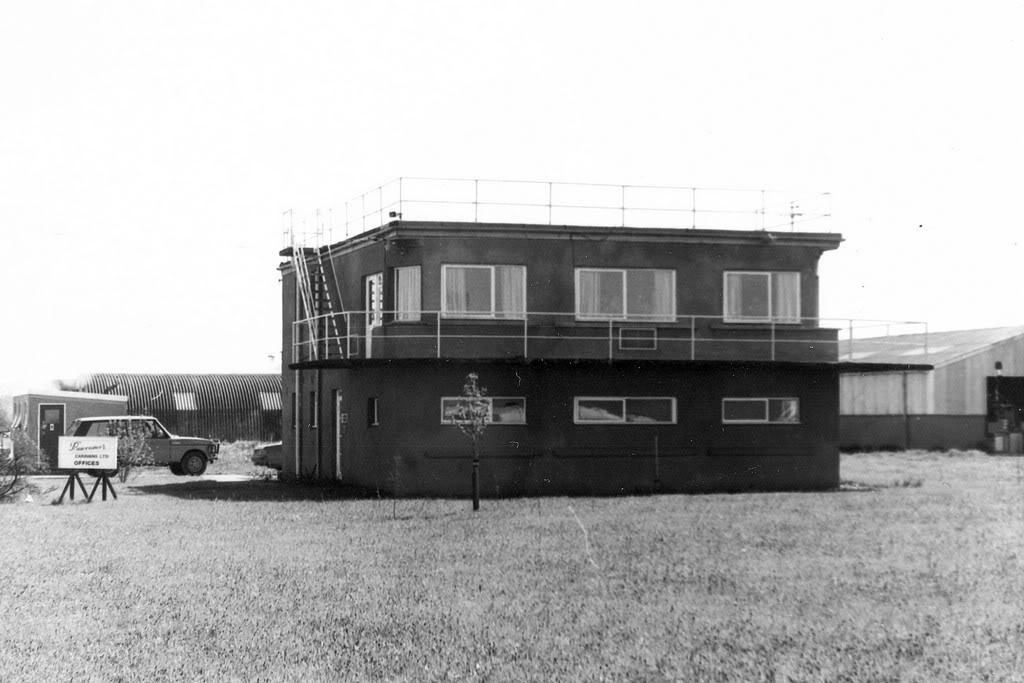 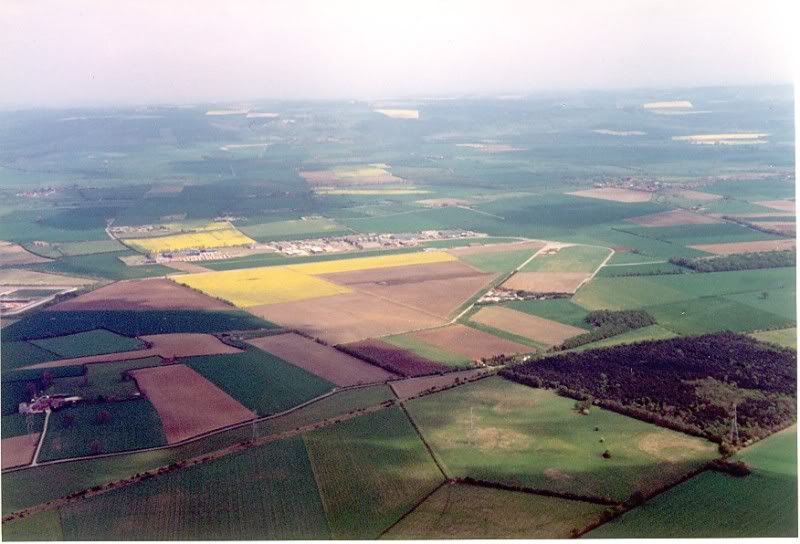 Full Sutton in 1990, notice the absence of the modern private airfield (AirfieldInformationExchange).

Full Sutton was redeveloped into a commercial area. In 1986 the north end of the airfield was selected as a site for a prison (HM Prison Full Sutton), which was opened in April 1988. A private airfield was set up in the 1990s, using parts of the old 16/34 runway as a platform. A grass runway was laid out parallel and just south of the former concrete 05/23 runway.
The tower of the WW-II airfield remained until 2003, after which it was demolished. Some buildings still remain, as does one runway.
In 2009, Richard Flagg made a photo report of the remaining infrastructure. 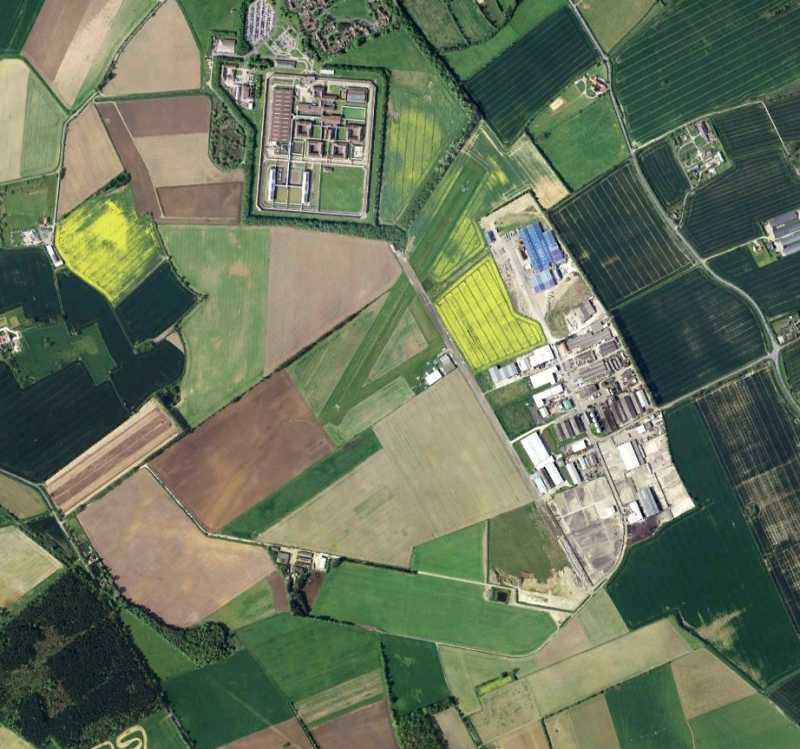 Full Sutton Airfield and the prison in 2007 (Google Earth)