Gjadër airfield (also known as Gjadër Air Base, Gjadr Air Base, Zadrima Air Base or Lezhë-Zadrima Air Base, ICAO: LAGJ) was an airfield about 65 kilometers north of Tirana.
The airfield was built between 1969 and the mid-1970s in an attempt to stop Yugoslav intrusions into Albanian airspace. Many websites claim it is unique in Albania because it is partially located in the side of a mountain. This is not true however, as Berat-Kuçovë Air Base has a similar feature.
From the design of the airfield it appears the Albanians had Chinese help in the design of the airbase. The 14 meter wide hangar in the side of the mountain has two entrances and is capable of storing about 50 jets and support personnel.
When taking off heading south from the 17/35 runway pilots had to be careful: taking a slight starboard turn would end you up in the side of the mountain. This was because the end of the runway was only 200meter from the face of the mountain.
Although the first aircraft used the runway on 10 July 1973, the airfield was not officially opened until 15 March 1974. Fighter Regiment 5646 was established on the base with a squadron of Shenyang F-6 'Farmers'. They were alotted six Shenyang FT-5 'Frescos' for training in May 1976 along with a Chengdu F-7A 'Fishbeds' squadron from Tirana-Rinas. A third squadron, flying Shenyang F-6s, was transferred from Kuçovë Air Base in October 1976. The unit was later redesignated as 4010 Regiment. 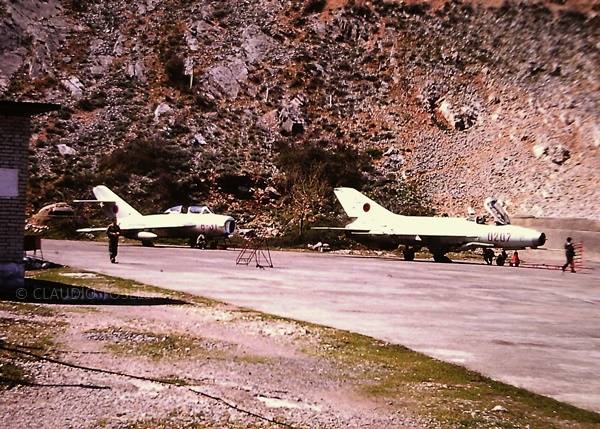 The Albanian Air Force used the base until at least 1993, Claudio Toselli shot this Shenyang FT-5 and Shenyang F-7 '0207' at the airfield. 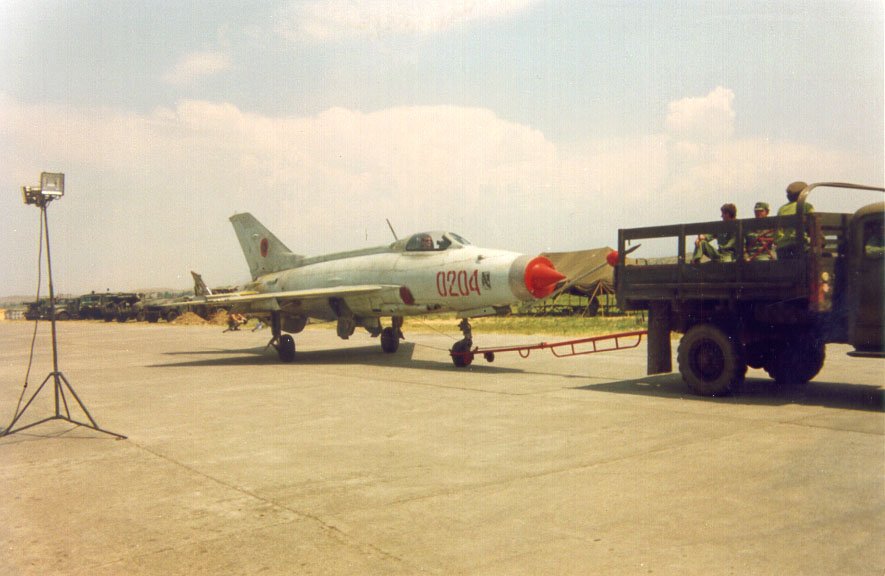 Chengdu F-7 0204 being towed out at Gjadër (Andy Cela, via Aeroflight.co.uk). 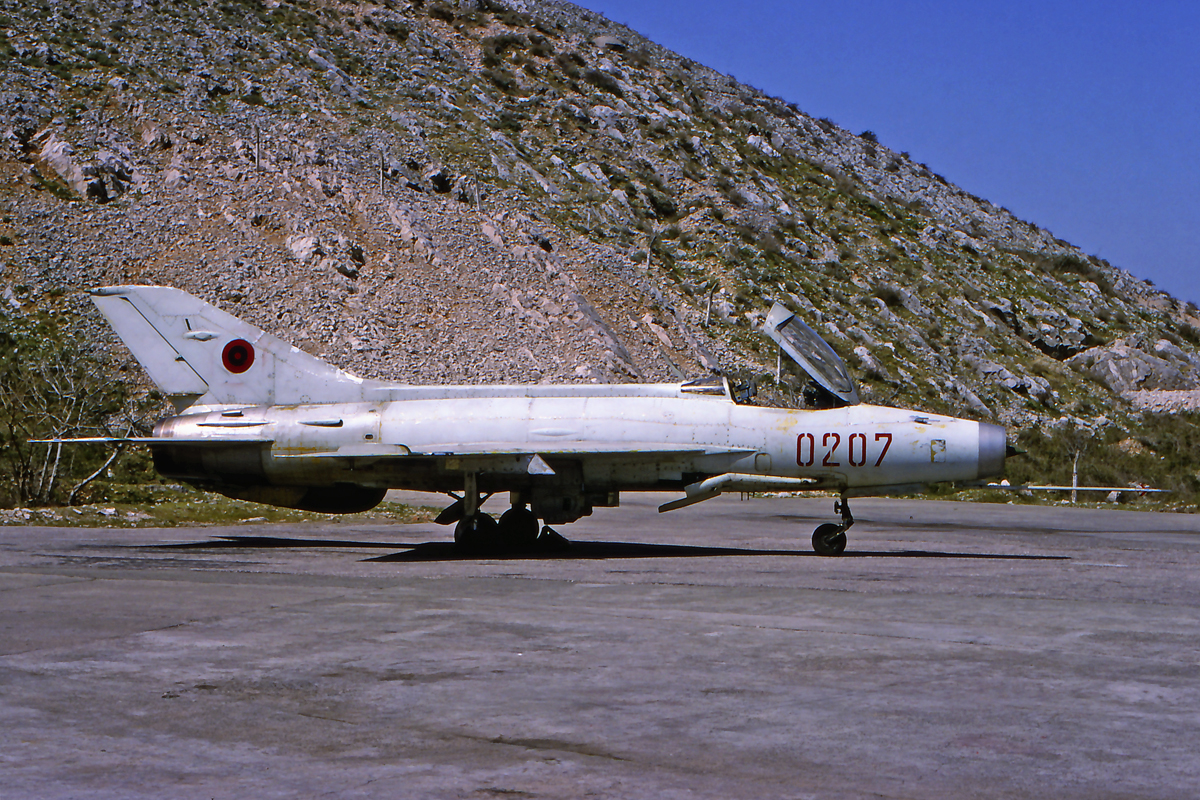 Shenyang F-6 on the secondary runway at Gjadër (© Claudio Toselli, used with permission). 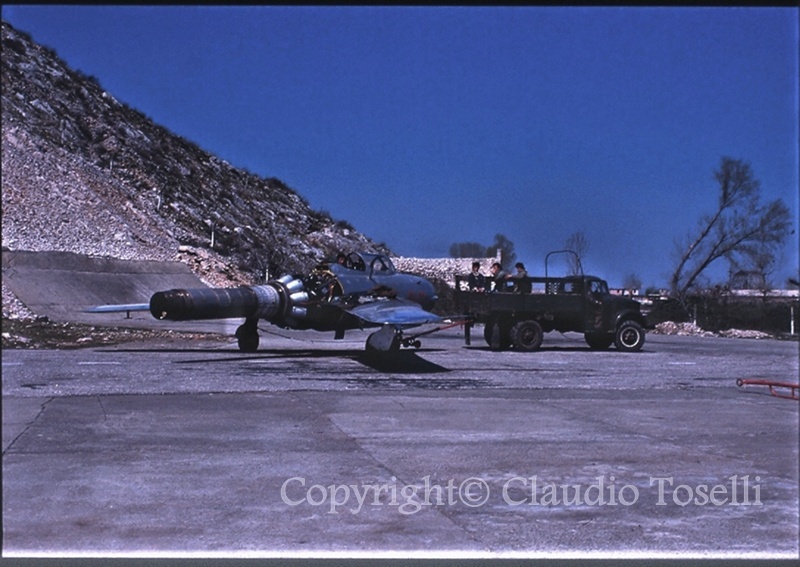 Groundcrew positioning a Shenyang FT-5 for an engine test at Gjadër (© Claudio Toselli, used with permission).

From February to April 1994 the CIA used the base for unmanned spy missions during the war that followed the breakup of Yugoslavia. Two Gnat750 drones and a ground satellite transmitting station were sent to the base to monitor both the Federal Republic of Yugoslavia and Bosnia-Herzegovina. The operation was not a success, because of bugs in the datalink and limited use during bad weather. In order to counter the bugs the CIA used a Schweizer RG-8A powered glider as a flying data relay station. Out of its 8 hour endurance, 6 hours would be used to get to and from its airborne station. As Gnat had a 24-30 hour endurance, this severely limited the effectiveness of the system. 10 initial flights were conducted from Gjader, which can be marked as a failure, but subsequent flights from Croatia proved to be more successful.
A year later the USAF came to the base to operate early Predator UAVs with the same objective. Disassembled Predators were flown to Gjadër by C-130 Hercules. They were reassembled and test-flown by civilian contractors first. Over 70 military personnel of the intelligence community were deployed and live missions began in July 1995. In mid-august two Predators were lost over Bosnia, the second after having been deliberately blown up in mid-air after an engine failure. Dubbed Operation 'Nomad Vigil', the original 60-day mission was doubled to 120 days. A Shenyang F-6 at Gjadër, photographed before the riots of 1997, as the tower in the background is still intact (© Claudio Toselli, used with permission).

Like most Albanian government installations, the base was overrun by locals during the 'Lottery Uprising' of March 1997. Several buildings, including the control tower, were destroyed. The base was abandoned on 16 March. A severe lack of funds prevented the necessary repairs, and flight operations finally ceased in 2000. The base and its hangar are now used as a storage facility for fighter aircraft withdrawn from use. No Albanian Air Force aircraft are permanently based at the airfield. Internet movies show locals racing cars and motorcycles on the runways. 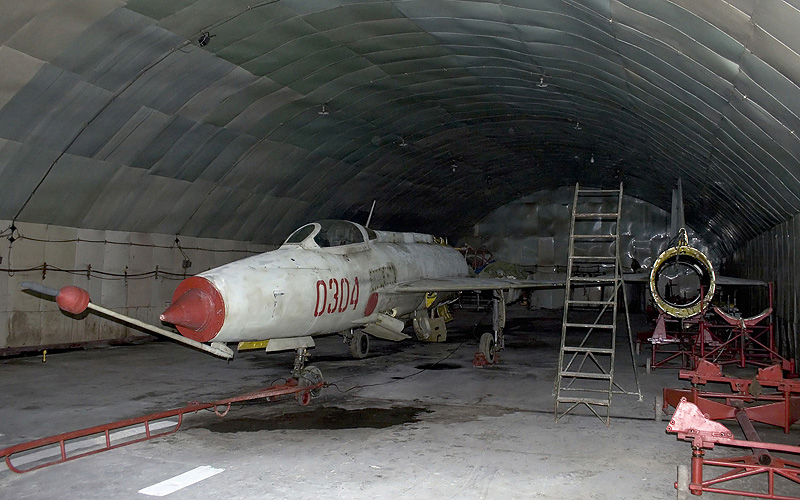 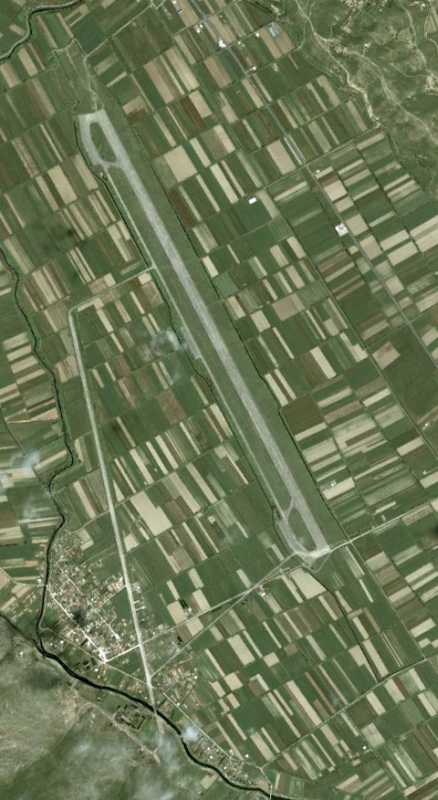 Overview of the airfield in 2007 (Google Earth)

View from the mountain overlooking the airbase in 2009 (Panoramio).

Southern entrance to the mountain hangar in 2009 (Panoramio).
In 2014 Han de Ridder travelled to Albania in his LandRover. He wrote: "I could not resist the temptation to visit the two largest military bases. This proved surprisingly easy." At Gjadër he shot this video, which proves it is no longer possible to use the main runway for drag racing, which might indicate the runway may see some use by aircraft.

"Mille grazie" to Claudio Toselli for allowing me to use the photos he has shot in Albania since the 1980s. Claudio has posted many more at the Italian aviation website ilVolo.it.
contact us about this airfield