Hailfingen airfield (german: Flugplatz Hailfingen, Nachtjägerflugplatz Hailfingen or Advanced Landing Ground R-49 'Hailfingen') was an airfield southwest of Stuttgart in Baden-Würtemberg, Germany.
The airfield was built from 1938 by an Aug 1938 order of the State Minister for Aviation for a military air field of the first category (german: Einstazhafen I) on the county lines between Tailfingen, Hailfingen and Bondorf. The unused land was deemed very suitable, as it was flat, almost free of fog and at a strategically favourable location. After forests had been cleared, the State Workers Service (german: Reichsarbeitsdienst) began levelling the property to construct a 1200x80 meter runway.
The air field got the name "Hailfingen" because the base command post was in that community. From March 1942 the runway was deemed usable, and the Luftwaffe began using it as a diversion field, meaning it had no aircraft or personnel stationed. It was classified as an airfield of the first category (German: Einsathafen erster Ordnung), indicating it had a hardened (asphalt) runway.
In 1943 it was used for a training in glider aircraft for the Hitler Youth. Somewhere that year something important changed at the airbase, the stationing of night-fighters. As a result of that the airfield came under attack from Allied bombers. This led to the decision of Luftgaukommando VII to construct two taxiways to dispersal areas to the east and west of the airfield, and smaller storage and maintenance hangars.

On 6 May 1944 the order was given to parts of I./NJG6 to disperse to Hailfingen. A week later the air field was considered 'limited operational'. The rest of the NJG remained at Echterdingen. Between 8 and 15 Me110 and Ju88 attacked bombers and fighterbombers from Hailfingen.
Commander of the 11. Staffel (squadron) pilots was Kurt-Heinz Weigel, a pilot that had been taken prisoner at Scapa Flow in 1940. As a Prisoner of War he was transported to Canada, but by feigning a psychologial disorder he managed to be sent back to Germany. Once back home he converted to night-fighters and became captian of 11 Sqn of NJG6. He scored his last two victories from Hailfingen on 2 and 3 January, and was killed when his aircraft flew into the ground on March 1945 near Gerolzhofen. 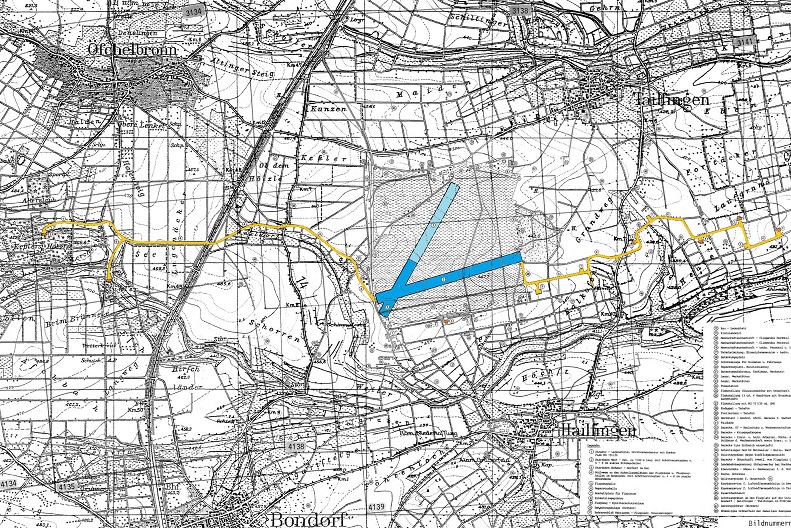 Map of the airfield in early 1945, with the runways in blue and the taxiways to the dispersals in yellow (source). 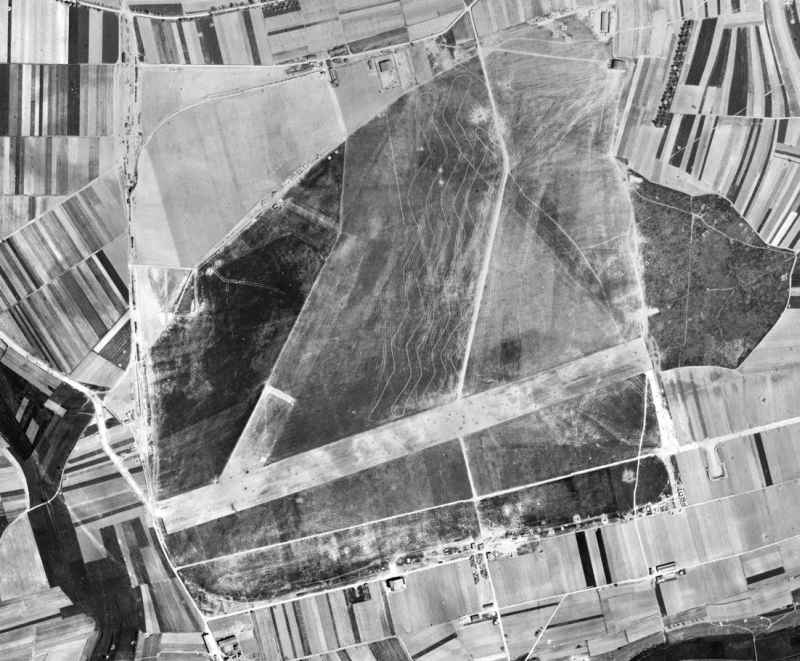 The actual airfield, without taxiways seen in March 1945 (source)

The night-fighter unit used Hailfingen until late March 1945. On 29 March the order was given to reduce its strength to 16 aircraft and crews, the rest was ordered to march (or use trains) to Schleißheim. Any remaining aircraft were ordered to be destroyed. The troops marched off, but the aircraft were not destroyed, mainly because of a counter order by the 7th Fighter Division.
On 6 and 7 April the runways were alledgedly blown up by the Wehrmacht, but as a response to this article, I recieved an email from Mr. Uhrmann. He informed me his dad's logbook shows he -Johann Uhrmann- flew a Bf110 (Number BT+GY) from Hailfingen on 8 April 1945 at 11:20, and arrived at Schleissheim at 12:00 (210KM and 40 minutes away). It was his last mission of the war. On 9 April the airfield was attacked by allied fighter-bombers.

The airfield was taken by French troops of the Second Free French Army on 18 April 1945. In spite of the massive destruction at the base the Allies managed to put the airfield back into service as R-49 'Hailfingen', while lengthening the runway and adding a second parallel one. Construction began on25 april 1945, and for some months men from surrouding villages were ordered to work at the airfield, some of them at no wages. Part of their job was to refill bomb craters on the blown up runway. The airfield closed on 11 july 1945.

In the early 1950s the runway was replanted and used as a playground and moped circuit by local youth. Later the western end of the runway was also used as a go-kart circuit.
By the late 1950s and again in the early 1970s the former air field came back into view as the location for a new airfield for Stuttgart (Stuttgart II). With success the surrounding communities, both officials and civilians, fought the idea. The last attempt to restart the airfield took place in 1972/1973, but again the communities won.
On the runway a small forest developed, which became a protected area in the 1980s. On the west end a memorial was built in 2010 to commemorate the 601 people (captured jews) that survived or died at the airfield during the war. A shortened version of the story of forced labour at the airfield can be read at this table (in German) or a larger version on Wikipedia (in German).

An excellent set of maps and photos of the airfield can be viewed here. 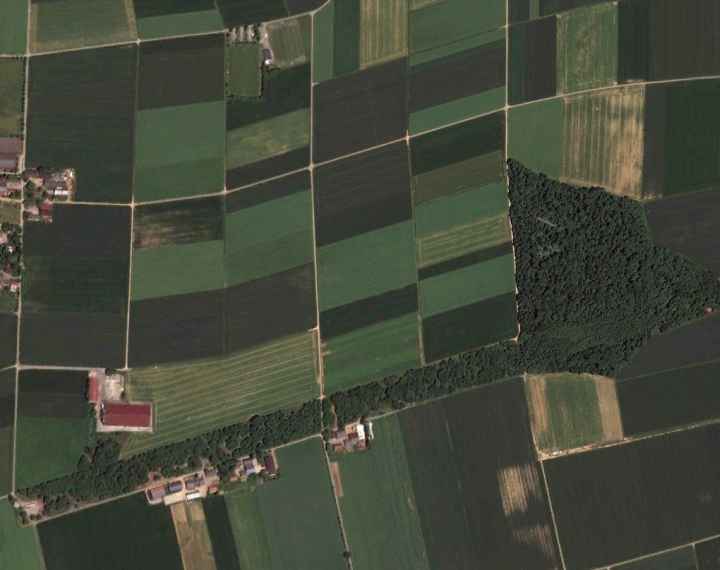 The airfield in 2005 shows the outlines of the runway are very clear (Google Earth).