Airfield Holzkirchen (german: Flugplatz Holzkirchen or Fliegerhorst Holzkirchen, also known as "R-93 Holzkirchen/Marschall airfield") was an airfield 30 kilometers south of München in Bavaria, Germany.
The airfield was built as a Fliegerhorst (air base) for the Luftwaffe of the Third Reich. Aside from II./JG300 (FW190) and I./JG301 (Bf109) Holzkirchen was also used by the Italian Republican Air Force (Italian: Aeronautica Nazionale Repubblicana.); I Gruppo Caccia and III Gruppo Caccia were training in Bf109s at the air field.
Just before the capitulation of the Reich only 3 Bf109 aircraft remained operational, and the remaining aircrews were severely demotivated.
The airfield was overtaken by the USAAF in 1945, and used as a military airfield for L-5 communication aircraft of 14th Liaison Squadron, XIX Tactical Air Command from 23 May 1945. 14 Liaison Sqn moved to Bamberg in July 1946 and presumably the airfield closed shortly after.

From 1950, when the Cold War began, the airfield was no longer used as such. Instead it became the site for one of the transmitters of Radio Free Europe (RFE), also known as Radio Liberty. The radiostation, partially funded by the CIA, broadcasted news programs aimed at Eastern Europe. It's transmitters were powerful enough to cause electromagnetic interferences. In 1984 these interferences were strong enough to cause the crash of a Tornado fighterbomber that happened to pass nearby. Many of its neighbours complained the transmitters made them sick and some could receive the radio transmissions through their faucets.
RFE stopped broadcasting from the site in 2003, and the sender and antennas were taken down in 2004 The former airfield is now a golf course, and nothing remains of the wartime airfield. 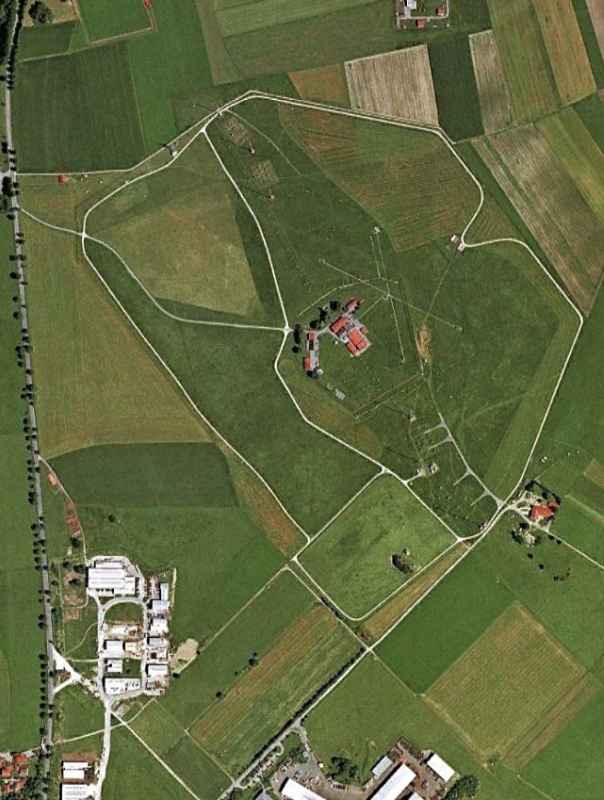 Holzkirchen in 2002, when it was still a Radio Free Europe transmitting site (Google Earth).