Air field Jena-Rödigen was an airfield 210km southwest of Berlin, in Thuringia, Germany
Although largely located in Saale-Holzland, its barracks and main entrance are located in Jena. The airfield was built ca 1935s as a private airfield, but soon taken over by the Luftwaffe. The Luftwaffe expanded the airfield into a Fliegerhorst.
Not much is known about Jena-Rödigen. What is known is that III./JG3 "Udet" was formed here on 1 March 1940, with Stab III/JG3, and 3 Staffeln: 7./JG3. 8./JG3 and 9./JG3.
The unit did not remain long though: on 28 March 1940 its Bf109Es moved to Detmold.

During the war the airfield served as an auxiliary for flying schools, like the Flieger Ausbildungs Regiment 51 (FAR51). It must have been well equipped though, because it also served as a night flying alternate. After July 1942 is was suppposedly used as an air defense base to protect the Zeiss factories.

After 1945 the airfield was abandoned, and its concrete runways were demolished for aggregate. The flying terrain was then returned to agricultural use. The baracks were reused however, and became home to Nationale Volks Armee (NVA) units and units of the Soviet Army. The NVA stationed the Bewegliche Raketentechnische Basis-3 (BRTB-3, or Mobile Missile Technology Base 3). The Soviet Army stationed 180.ORDN (180.Missile Unit) and 417.ORDN (417.Missile Unit), both subordinate to 11 Gw.RBR (11.Guard Missile Brigade). All were equipped with nuclear-capable SS-23 'Spider'/OTR-23 'Oka' theatre ballistic missiles. North of the barracks, on the former airfield, an ammunitions storage facility was built by the NVA, called Munitionslager 52. 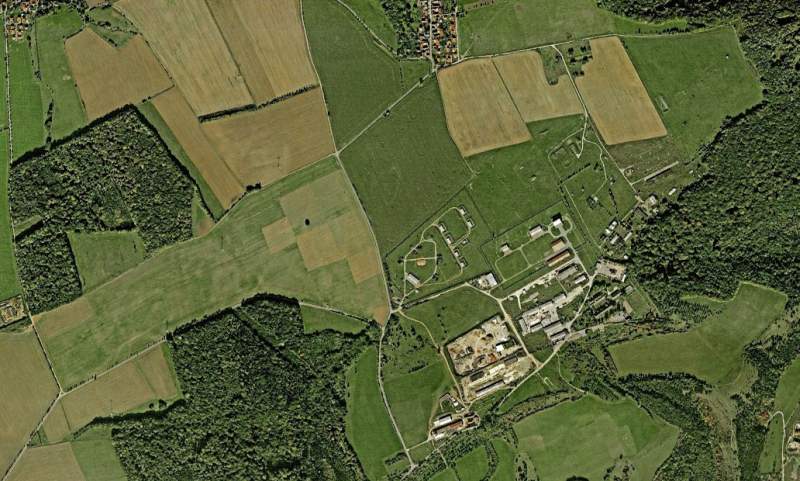 Although the runway had been taken out 50 years prior to this photo, the outlines of the old Fliegerhorst are still clearly recognisable in this 2000 aerial view of the former airfield/missile base (Google Earth) 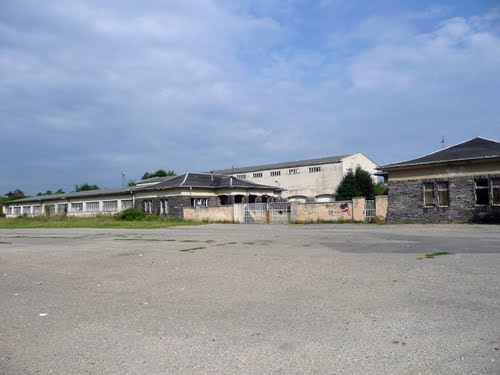 Today, the barracks are empty. Many of the buildings that still remained in 2000 have been torn down though. The main entrance still existed in August 2010. Visits to the complex are possible, but it is not recommended without permission of the owner, who has some large dogs guarding the terrain.