Air field Kingsfield (ICAO: LCRE) is a small airfield in the Eastern Soverign Base Area in Cyprus.
The airfield was built for the Army Air Corps, possibly around 1960. 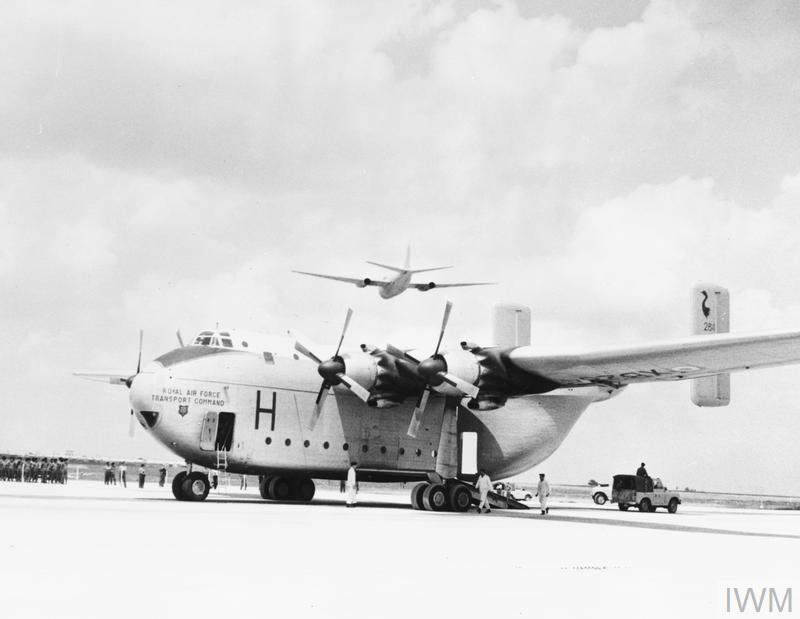 A Canberra bomber flies over in salute as Land Rovers of 33 Field Squadron, Royal Engineers, emerge from a Beverley transport aircraft of 47 Squadron, RAF Transport Command, which landed on the 1,200 yard airstrip at Kingsfield on Dhekelia Sovereign Base Area to mark its official opening (THE BRITISH ARMY IN CYPRUS : THE 1960S © Crown copyright. IWM (MH 33993))

During a September 1972 (some sources say 1974) landing of a Hercules there was a bizarre incident at Kingsfield. One engine was kept running during unloading of the aircraft. The loadmaster was left in the cockpit, while the rest of the crew joined the queue to get ice-creams. Appearantly some mistakes were made and the brake pressure fell dramatically. As everyone in the queue watched, spellbound, the aircraft neatly taxied itself straight into the hangar door. A very considerable amount of damage was done to the nose of the aircraft. According to the Crusaders Gliding Club website: "It was, in fact, touch and go as to whether the aircraft was scrap or not."
In September 2014, I was mailed by David "Ozzy" Osborn, a former member of the Near East Air Force Parachute Medical Rescue Team (NEAFPMRT) and webmaster of exbrat.com and 210entry.com. He used to jump from C-130Ks on most Wednesday mornings from 1973 to August 1974, when Cyprus was invaded. He remembers the airfield to be affectionately called “Noddy Land” as they only used to work in the mornings because it was too hot in the afternoon. He was on the repair team of the C-130 (made up of members of 103MU) and responsible for removing the engines to put them into storage whilst the “riggers” repaired the aircraft. He told me it took about 9 months to repair the Hercules. According to David, a good mate of him was the marshaller on that day. After he had stopped the Hercules, he asked the pilot if he wanted the aircraft chocked (put wheel blocks under the gear to prevent it from rolling away) and the pilot said no. The crew got out and the pilot was buying the ice creams for everyone. He left the “loady”, the Air Load Master, on the brakes. However, the pilot had made a mistake of only leaving the number 3 engine running. Number 3 engine is the only one without a hydraulic pump and the parking brake automatically releases after 5 minutes. After the brakes released themselves, there was no hydraulic pressure left in the hydraulic accumulator to apply the brakes.

The pilot was leaning against the side of the nose eating his ice cream, when the aircraft began to move. Thinking the loadmaster was playing with the controls, he shouted up to the loady to stop messing about. The loady began to panick and because the number 3 engine (inboard right wing) was the only one running, it started to roll with a left hand turn. It had gathered quite a speed by the time it hit the hangar/workshop with its nose and the right hand wing tip. "Ozzy' travelled to Dhekelia a few times to help the riggers to repair it over the next 9 months.
David believes that at the time of the accident, the runway was constructed from what he thinks was waste oil mixed with sand, looking distinctly different from the material shown in the photo above.

The famous 'runaway Hercules' C1 XV209 showing the damage done to both the aircraft and the hangar (PPRuNe).

XV209 at Kingsfield Airfield following repair by 103MU. The repair was guaranteed for 50 miles or 20minutes flying time, just enough to get her back to Akrotiri for completion of repairs (103MU page at rafakrotiri.co.uk).
Kingsfield and Hercules compatibility had a history: Kingsfield made headlines in the aviation industry in the late 1980s, as it was the location where the RAF tested the use of 'desert pink' paint. The use of the paint in itself was not shocking in itself, it was the fact that a complete C-130 Hercules became pretty much invisible from the air. The succesful trial lead to a large number of RAF aircraft receiving 'desert pink' paint during the Gulf War of 1991 (Desert Storm).
During weekdays and exercises the airfield is jointly used by the Army Air Corps. On weekends the airfield is available for recreational flying.


Flight from Kingsfield in a Scheicher ASK-13 Glider with (then in April 2011) 13 year old student pilot D.Gregoriou
contact us about this airfield