46°49'24"N 001°46'28"E
runway: ../.. - ...x..m - grass
Air field La Martinerie (Aèrodrome La Martinerie, also known as Châteauroux-La Martinerie, Base Aérienne 103, La Martinerie Airdrome and La Martinerie Air Depot) was an airfield 230 kilometers (144 miles) south of Paris, France
The airfield was built in 1915 and establlished in 1916 as a temporary pilot training school for World War I aviators. It was built for the French Air Force, but 297 American Army Air Service pilots were trained there too from 1917 onwards.
After the war, the facility was used by the French Air Forces 3e Régiment d'Aviation de Chasse (3rd Fighter Regiment) up until 1936. Initially it included some 800 men, wooden barracks and ten aircraft in three hangars. Mechanics and pilots were divided in two groups of three patrols that used Spad, Caudron, Nieuport29 or 62 and Henriot14 aircraft. Over the years the airfield kept growing, crossing the highway Déols-Lignières in 1929. The airbase became known as Base Aérienne 103 (BA103).
Between 1936 and 1939 it was home to the 32e Escadre de Bombardement (32nd Bomber Squadron), flying single engine Mureaux115 (II./32) and twin engine Bloch200 (I./32) aircraft. Also in 1936, the Bloch company owned by Marcel Bloch (today better known as Marcel Dassault) began using the airfield for flight testing from its facilities at Déols, 5 kilometers to the northwest. Between 1936 and 1937 his company was nationalised into the Group 'Société Nationale de Constructions Aéronautiques du Sud Ouest'(SNCASO).
In these years the impressive buildings that can be seen near the entrance from the Route Nationale 20 were built. The pre-World War II years are known as the 'Golden Years' of the Bloch company. 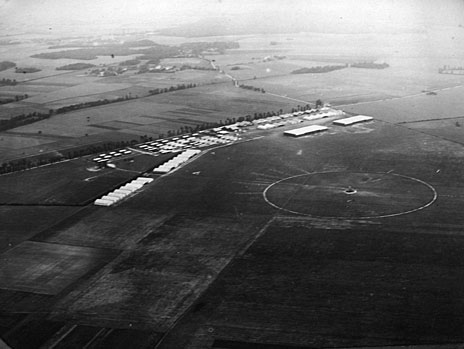 Aerial view of La Martinerie in 1917 (source).
As a crossing point for the French Air Force the airfield was bombed by the Luftwafe several times during the Battle of France (1940).
After the defeat of France it was used to store grounded French aircraft. The Germans were the first to merge the two Châteauroux airfields into one.
During World War II Châteauroux was not used very much by the Luftwaffe prior to early 1943. This was probably because it was in the dead-center of France in the unoccupied part of the country and thus well off the beaten path and far from the front area on the Channel and along the Bay of Biscay coast. At the beginning of 1943, and likely for the very reasons given, it was selected to become a major training airfield for fighters.
On 1 March, the Geschwaderstab (Wing Staff) and I. Gruppe of Jagdgeschwader 103 (Stab./ and I./JG103) transferred from Bad Aibling near Munich to Châteauroux with a large complement of assorted single-engine training aircraft. This included Arado Ar68s, Ar96s, Bücker Bü131s, captured North American NA57s, NA64s, French Bloch155s, Fieseler Fi156s, Messerschmitt Bf108s and a large number of older models of the Messerschmitt Bf109 fighter. The Geschwaderstab, Gruppenstab (Group Staff) I, 1. Staffel (Squadron) and 3. Staffel were all at Châteauroux-Deols, while 2. Staffel was detached to Châteauroux-La Martinerie.
On 5 February 1944, both Châteauroux airfields and 5 other Luftwaffe airfields in France were bombed by 354 B-17 Fortresses and 98 B-24 Liberators escorted by 634 fighters, all from the 8th AAF in England. The Châteauroux airfields were decimated. An estimated 33 of JG103s aircraft were destroyed or severely damaged on the ground and a number of others were damaged to a lesser degree but nevertheless rendered temporarily unserviceable. Only 4 or 5 of the fighter school planes escaped damage. With most of the base infrastructure in ruins and without aircraft, JG103 was out of business and not long after the attack it was ordered back to Germany, transferring on 30 March 1944 to Stolp-Reitz in Pomerania and Parow in Mecklenburg. Châteauroux is not known to have been used again until early June 1944 when 12.Staffel of Geschwader "Bongart" arrived to fly support for anti-partisan operations underway in central France. This Staffel departed around 13 or 14 July and transferred to Clermont-Ferrand. A few days later a single Staffel of twin-engine Ju 88C-6 day fighters from I./ZG 1 was stationed there for about three weeks, but for what purpose is not known, although support of anti-partisan operations is suspected.
After the German Army retreated from Châteauroux in 1944, Chateauroux-La Martinerie became the first flight school to open after the liberation on January 24, 1945. The Free French Air Force also used it as a bomber airfield and after the war as a storage depot. 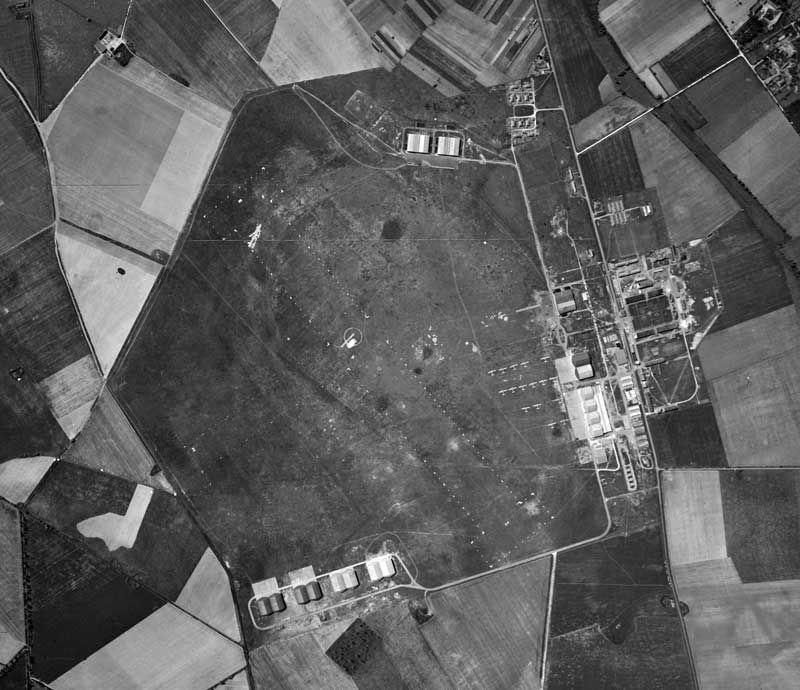 Two runways can be recognised in this photo of Chateauroux-LaMartinerie in 1950, one of its final years as an airfield (IGN, via Géoportail)
In 1950, the facility was offered to NATO to develop a depot and maintenance facility for the United States Air Force for joint use by the French and the Americans to support both civil and military aircraft. The final agreement was signed on 27 February 1951. The base was significantly enlarged to 386 hectares and a railway connection was built. From July 1951 the men stayed in a tent-city of 240 tents with 10 beds on the east side of the airfield. From 1952 the men were moved to renovated barracks and new prefabricated Quonset huts 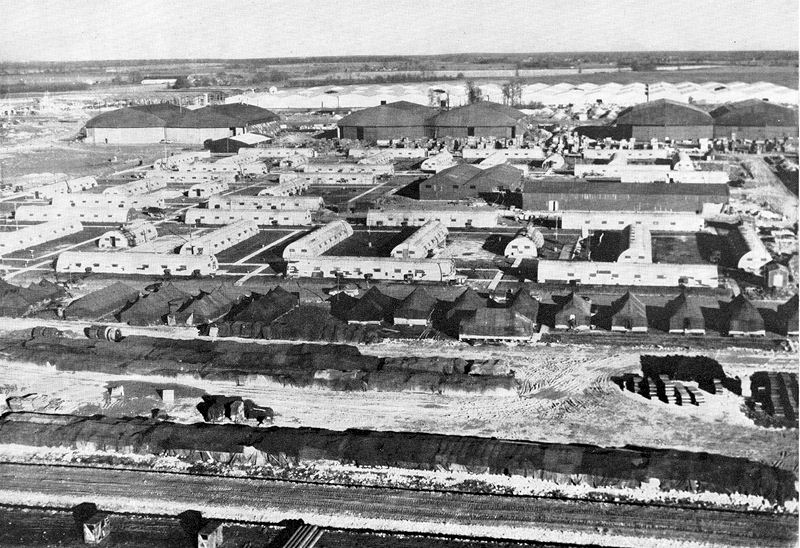 La Martinerie was the site of a lot of construction as witnessed by this 1951 photo
In 1952 the airfields runway was closed after Déols new lenghtened runway reopened, only 3 miles away. Châteauroux-Déols Air Depot (CHAD) became the largest depot in Europe to support USAFE and other NATO air forces. La Martinerie was developed into La Martinerie Air Depot, a part of the CHAD complex, with its primary role being a logistics hub and Depot-level supply facility. It handled all classes of USAF supplies, controlling six sub-depots dispersed throughout France which specialized in specific supply categories. It also was where the Headquarters and Administrative command facilities for Central Air Material Area, Europe (CAMAE) were located. CAMAE came into existence on 1 January 1956, when Châteauroux was transferred to Air Material Command.
In addition to the depot supply function for Europe, Châteauroux Air Depot managed the task of equipment maintenance and disposal for Europe. Originally manning was a combination of USAF personnel, American civilians and French employees, but the scope of the mission soon became so large that a facility about six times the size of the Châteauroux facility would be needed to accommodate the work involved. Much work was therefore outsourced to the skilled civilian technicians of various airlines' workforce. KLM, SABENA, Air France, Air Italia, SAS, CASA, Fiat, Fairy, SNCNF-Marseilles, and SNCASO-Toulouse all provided IRAN (inspect and repair as necessary) services on USAFE & NATO aircraft. CAMEA/Châteauroux performed contract administration, quality control, test flying and logistical support, while much of the actual work was performed remotely at various NATO civil facilities with CHAD and USAF representatives on-site to monitor performance and coordinate the logistical support needed from Châteauroux.
One of the unusual tasks at Châteauroux was the support of new aircraft procurement. Two fighters, peculiar to NATO and not flown by the USAF, were purchased with MDAP funds: 221 North American F-86Ks (built by FIAT in Italy for France, Greece, Italy, Iran, the Netherlands, Norway, Turkey, Yugoslavia and West-Germany) and 225 Dassault Mystere IV-As (built by Dassault in Bordeaux for Frances' contribution to 4ATAF).
In addition to the main facility at Châteauroux, the 73rd Air Depot Wing operated several Sub-Depot facilities for supplies and equipment, located at Bordeaux (clothing and medical supplies), Niort/Chizé (aircraft ammunition), Metz (vehicles and construction supplies), St. Mihiel (conventional ammunition storage), Moulins (vehicle storage and maintenance) and Villefranche (parts storage). 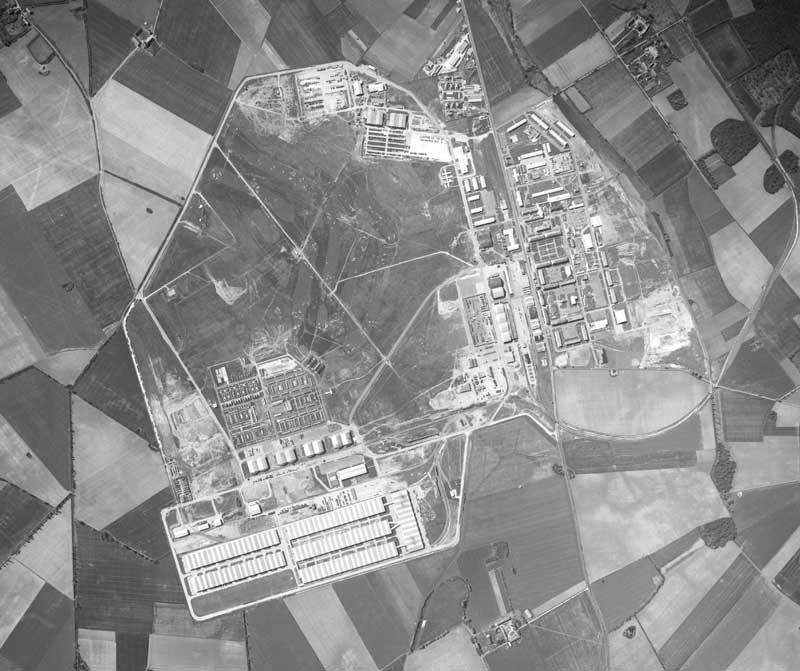 Although there was obviously a lot of construction going on at La Martinerie, the airfield seemed to have been closed only to be converted into a... golf course! (IGN, via Géoportail)
On 7 March 1966, French President Charles De Gaulle announced that France would withdraw from NATO's integrated military structure. Additionally the United States were informed that they must remove their military forces from France by 1 April 1967. The 73rd Air Depot Wing operated the depot until departure of all US forces from France, leaving Châteauroux Air Base on 20 March 1967. On 23 March the American flag was lowered for the last time at 17:00 hours, for fifteen years the time at which the French and American flags were lowered each day. 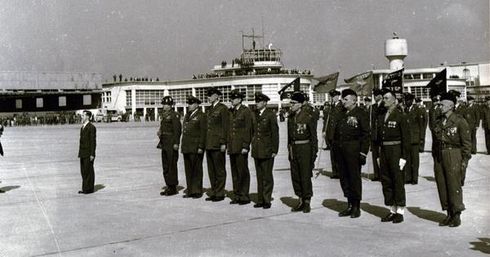 Closing ceremony at Chateauroux in 1967. Many photos of the American years of La Martinerie can be viewed at: chateaurouxairstation.com
The military base was divided in two parts; the largest a commercial area, a smaller part became part of the French Army. Many of the old buildings, including hangars which date back to the 1920s, are still in existence (and use) today. The French Army is expeted to withdraw in 2012 however. 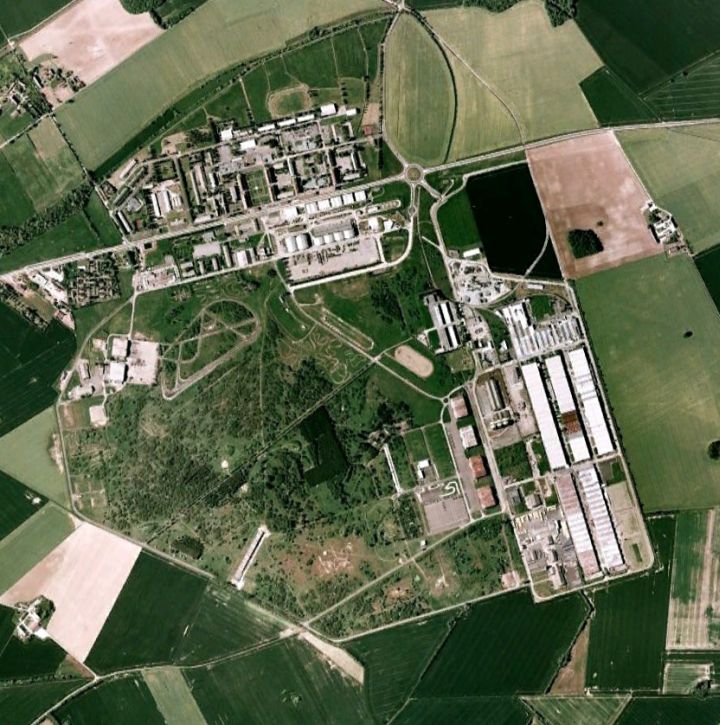 La Martinerie in 2004 (Google Earth)
contact us about this airfield