Royal Air Force Station Laarbruch, also known as RAF Laarbruch (german: Fliegerhorst Laarbruch, ICAO ETUL or EDUL before 1 January 1995) was one of four 'Clutch' air bases of the British air forces in Germany (RAF Germany) during the Cold War.
The base was located in Germany on its border with the Netherlands, halfway between the Dutch cities of Nijmegen and Venlo.

The first use of the field was in the final stages of World War II. The Britisch army built Advanced Landing Ground Goch (B.100) in preparation for the final push across the Rhine. It was only used between 4March and late April 1945. The infrastructure was straightforward and simple: a 1180meter (3600feet) PSP runway with a parallel 983Meters (3000feet) grass emergency runway, refuelling was done with jerrycans, and there was enough space for two complete Wings.
The first unit to fly from the airfield was 662 (Auster) Sqn, who remained at the airfield until 24 March. They were followed by the British 121 (Typhoon) Wing (20March). Ten days later the Canadian No. 143Wing joined them. The Hawker Typhoons of 121Wing were exchanged for the Spitfires of Canadian No. 127Wing by mid-April, but by the end of that month all Wings had left.
This ended the use of B.100 airfield. 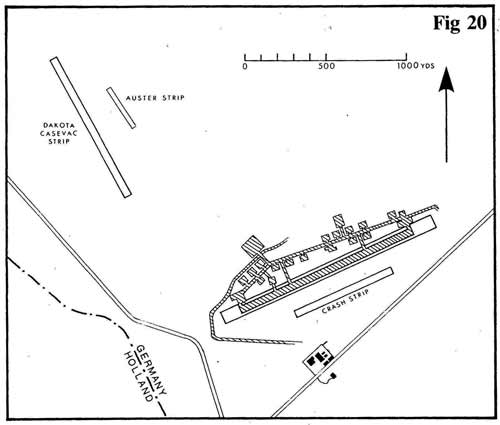 After the first Gulf War, many of the squadrons were relocated, No. 2 Sqn went back to RAF Marham; and 15, 16, and 20 became reserve squadrons. Laarbruch became home to the Harriers of 3(F) and IV(AC) squadrons when RAF Gütersloh closed, along with the Chinoook HC.1 helicopters of 18(B) Squadron.
18 Squadron returned to RAF Odiham in 1997 with the remaining Harrier squadrons departing to RAF Cottesmore in 1999. Laarbruch was also home to 1 and 26 Squadron RAF Regiment (air base air defense). Also on the station was a Squadron of RAF Police supplying the security and policing duties required for the Station and the surrounding area. 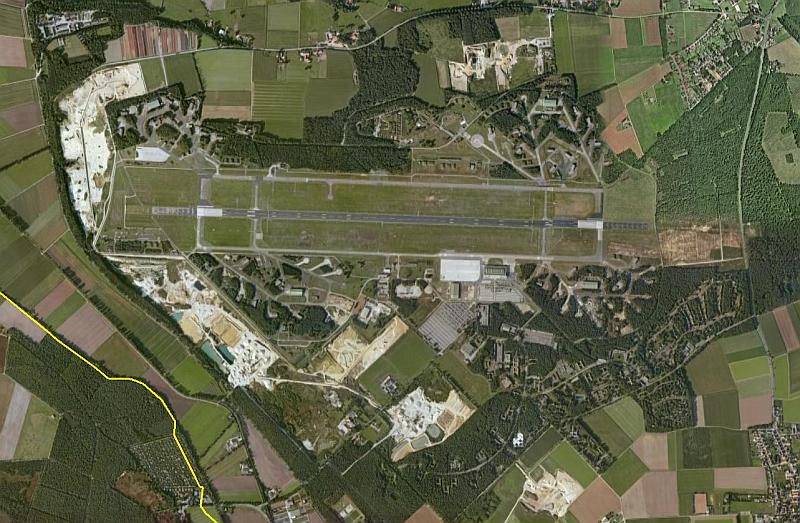 After RAFG closed the airfield in 1999 it found a new civilian lease of life as a budget airline airport Flughafen Niederrhein (Lower Rhine Airport), now known as Airport Weeze after the nearest large town. Civil operations began in May 2003.
Today better known as Airport Weeze (ICAO: EDLV), it is used mostly by low-cost carriers such as Ryanair. Its IATA-Code is NRN because of its official name Flughafen Niederrhein. Although initially called 'Düsseldorf (Weeze)' (a name still used by Ryanair) when the first plans were drawn for the civilian use of the airport, it actually serves better the closer Dutch cities of Venlo, Nijmegen and Arnhem, the German city of Duisburg and the immediate Weeze area.
In 2008, with 1.52 million passengers, which represented growth of 80% on the previous year, it was among Europeans fastest-growing airports.