Langford Lodge airfield (also known as No.20 SLG, RAF Langford Lodge or AAF597) was an airfield on the east bank of Lough Neagh, 23 kilometers west of Belfast, Northern Ireland.
Its control tower included the first use in the UK of angled windows to reduce reflections. The airfield was originally was established as a Satellite Landing Ground of RAF Aldergrove for 23 Maintenance Unit. In December 1941 the not yet completed airfield was transferred to the USAF however. 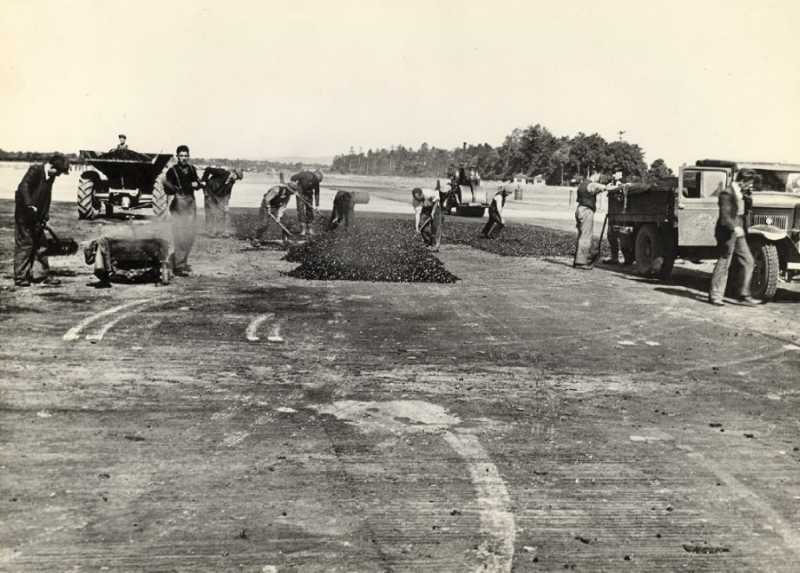 They opened 3rd Base Air Depot at the airfield, which opened on 15 August 1942. Unlike similar Depots in England, it was operated by the civilian Lockheed Overseas Corporation on behalf of and under supervision of 8th AFSC. Lockheed P-38 Lightning and Bell P-39 Airacobras fighters, freighted by sea to Belfast, were taken to Langford Lodge for reassembly and testing before being issued to squadrons. Republic P-47 Thunderbolts were also tested, although these had usually been flown in. Brewster Bermuda bombers for the RAF were assembled at Langford, and the facility also carried out modifications on B-17 Flying Fortresses and B-24 Liberator bombers.
The four Air Depots were the primary in-theatre logistical support facility in the UK, providing 4th echelon support to four air forces – the 8th and 9th in the UK, the 12th in North Africa and the 15th in North Africa and Italy. During the period November 1942 until April 1944, work of a reassembly, modification, repair, major overhaul or salvage nature was completed on at least 3,300 aircraft while a further 11,000 were line-serviced. Up to January 1944, 555 Pratt & Whitney, Wright, Allison and a small number of Continental aircraft engines were virtually rebuilt. Between July 1943 and April 1944 274,000 spark plugs were refurbished and 11,500 propellers were cleaned, adjusted and reassembled or subjected to further overhaul. The base was at its busiest during the summer of 1943. In fact it was unable to handle the flow of aircraft arriving from the USA due to insufficient hangar capacity and hardstanding areas and shortage of personnel.
As a result it took over RAF Greencastle (AAF Stn 237) as a satellite depot. From 1944 until the end of the war, salvage of both 8th and 9th AF war weary aircraft became an increasingly feverish aspect of work at both stations. 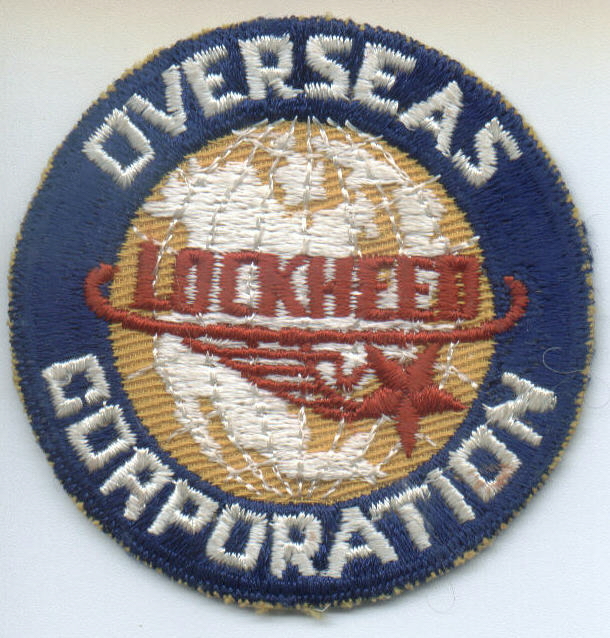 Shoulder patch of Lockheed Overseas Corporation, as worn by the civilian staff at Langford Lodge (city-data.com) 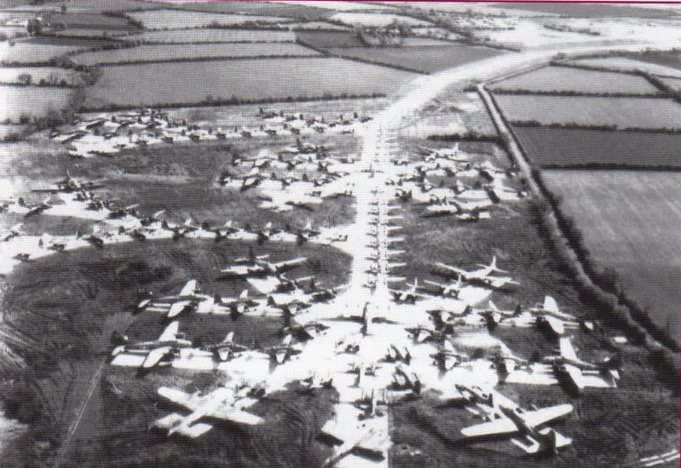 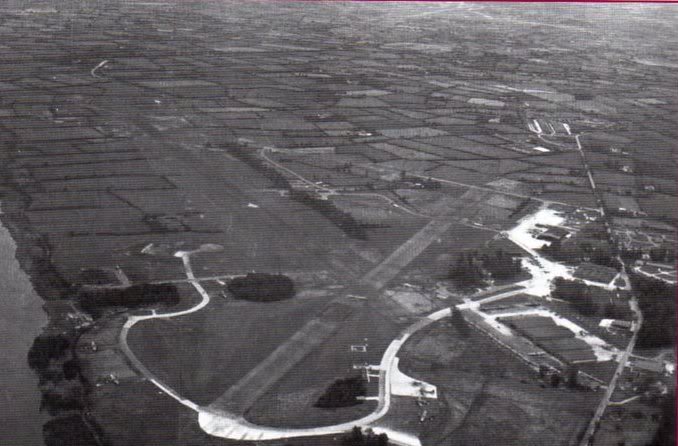 A small Air Force worth of aircraft held in reserve at Langford Lodge (gitrailni.com)

3,900 American civilian technicians from the USA, many of them highly skilled, were taken on by LOC for varying lengths of time. They lived at Langford Lodge and were assisted by comparable numbers of locally-recruited civilians who commuted daily. US military personnel were a third category, although the total on base before May 1944 was usually less than 1,500. On 1 January 1944 a total of 6,900 personnel worked on base: 2,913 locals, 2,883 LOC and 1,104 US military. The BAD closed on 7 August 1944 but Langford Lodge remained open as an experimental station and for storage. The RAF resumed control of the airfield in 1946.
It ultimately closed as a military airfield in 1953.


A compilation of clips taken of Langford Lodge during its wartime operation as a repair and modification depot circa 1943.
Unfortunately the accompanying website no longer exists. (YouTube)

The airfield then transferred to the Martin-Baker company, manufacturers of aircrew escape systems (ie ejection seats). They used a total of three Gloster Meteors (now reduced to two) and a single Beech King Air from the airfield. The Meteors are stationed in England, but occasionally fly to Langford, the King Air is used as a corporate shuttle. Additionally the company built a 6200ft rocket sled rail for the testing of ejection systems.
Some of the wartime airfield facilities used to house the Ulster Aviation Society's Heritage Centre. Exhibits included a Blackburn Buccaneer, a Hawker Sea Hawk and a Westland Wessex. The Society has now moved out and has found a new home for the collection south of Belfast. Notably, on 2 March 1989 a Dan Air BAe 748, bound for Belfast International Airport, mistakenly landed at Langford Lodge. The airfield is currently home to two model flying clubs; Langford Model Aviation & Langford Model Heli Club.
Today the airfield is formally owned by RLC (UK) a subsidiary of RLC Engineering Group which is head quartered in the Isle of Man. 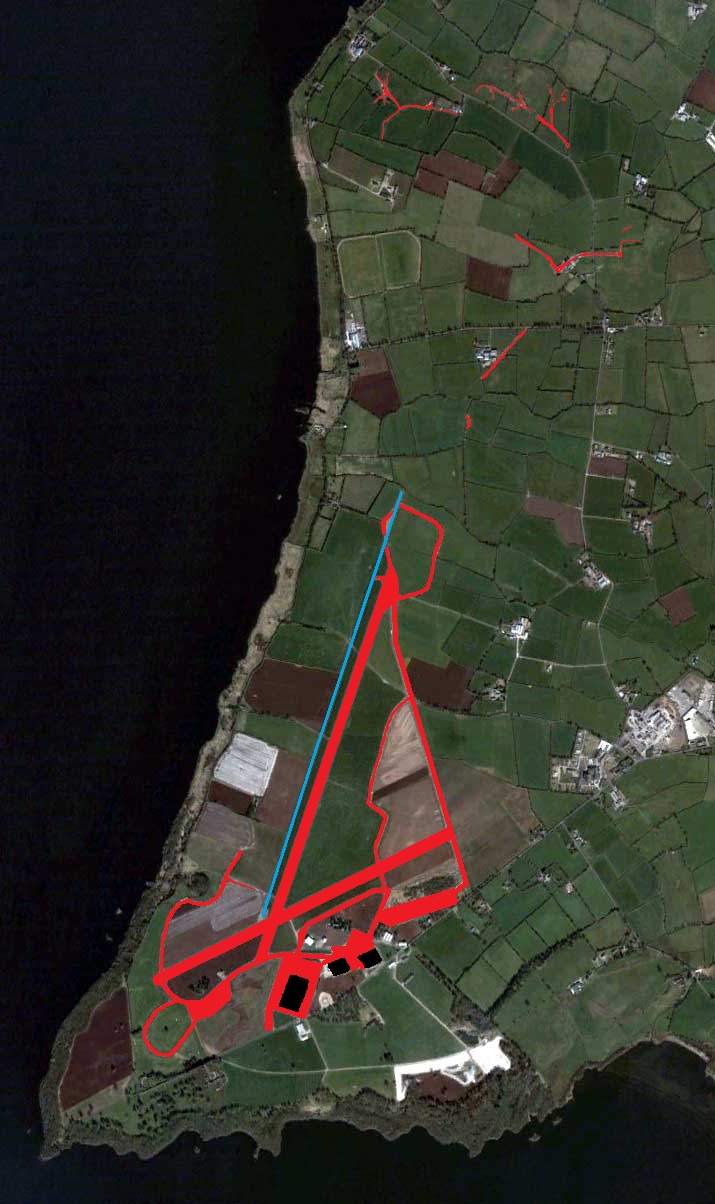 There is much more left of the airfield than what is immediately seen today. This photo displays what else is still visible at the airfield. Black squares are hangars, red is airfield infrastructure, blue is the rocket sled west of the main runway. 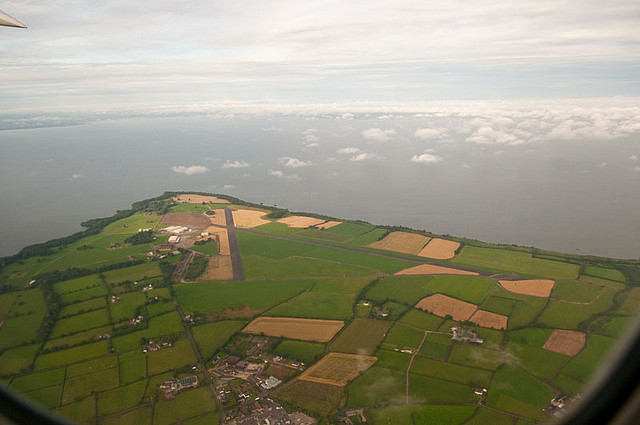