Longside air field (RNAS Longside, also known as Lenabo Airship Station) was an airfield 185 kilometers north-northwest of Edinburg.
The airfield was built between 1915 and 1916 to provide Allied shipping protection from German U-boats operasting in the North Sea. It was the most northerly airship station in the UK and a major element in the strategic network protecting the British coasts. The airfield was designed to accommodate the larger 'Coastal' or 'North Sea' types of non-rigid craft as well as those of the embryonic rigid fleet. Such stations typically consisted of a rigid-airship shed flanked on each side by a smaller 'coastal' shed, these being stepped forward forward to afford a sheltered area in front of the rigid shed. The whole assembly was aligned with the direction of the prevailing wind. The 'rigid' shed at Longside measured 150ft 6ins (45.87m) in width, so it would be able to house two of the earlier 23-class rigids. At 150 meters in length and 30 meters high, they could be seen from miles around. In order to transport materials and personnel efficiently to the site, a railway spur was constructed from Longside Station to the base.  Over 32,000 tons of materials and stores were carried by train to Lenabo. A small town consisting of support services, water tanks, gasworks,  gasometers, barracks, canteens, a church and a theatre was rapidly constructed on the site. Around 1500 naval personnel were deployed on the site. The line was used exclusively for the base and ceased to operate when the base closed in 1920.
Under normal circumstances, 100 naval personnel were needed to manoeuvre the airships in to the sheds by hauling on the landing cable. It was however almost impossible to handle the ships in bad weather. Each ship had an emergency panel which could be activated to deliberately rip the casing causing the gas to escape and the ship to collapse. On 21 September 1918 two coastal airships landed almost simultaneous in a gale. Even with 400 men on the ropes it proved impossible to get the airships into the sheds in such strong winds. Eventually, both airships had to be deliberately ripped.

When the site was decommissioned in 1920, the buildings were flattened, but the concrete bases and larger chunks of concrete masonry remain in what is now an extensive mature woodland. The railway remained only until 1923, when the tracks were removed. Concrete foundations, anchoring blocks and various other ruins are still visible at the site.
The airfield is not to be confused with the present day Longfield airfield (formerly RAF Peterhead). 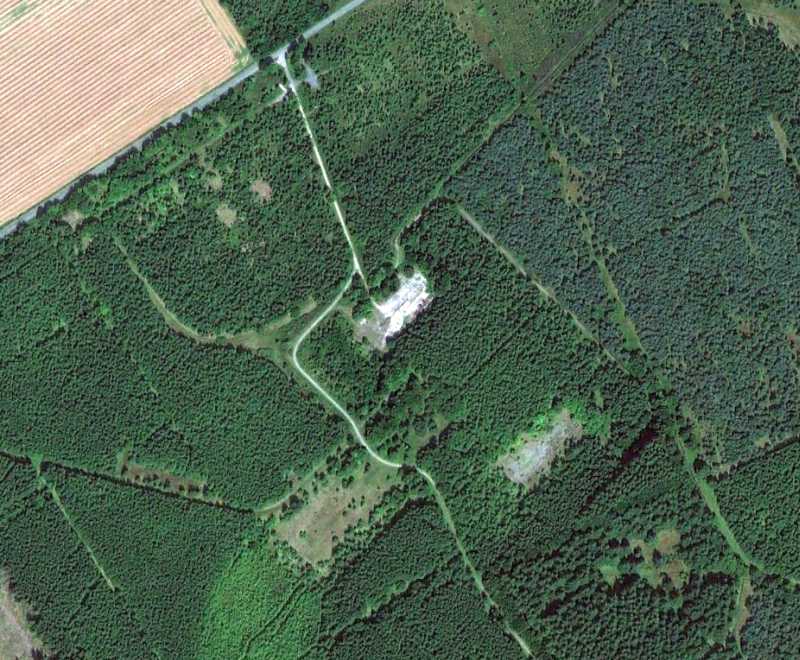 The location of the hangars in 2009 (Google Earth)