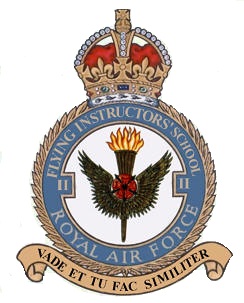 Montrose airfield (RAF Montrose or II Flying Instructor School) was an airfield 95 kilometers north-northeast of Edinburg.
The airfield was the first airfield, built in 1913, by what was then the Royal Flying Corps. In the early years of the Twentieth Century the expanding German Empire began to pose a real threat to the security of Europe and Great Britain. Germany also began to consider the North Sea as their own.
In 1912 the British Government responded to this by planning the creation of twelve "Air Stations" operated by the newly formed Royal Flying Corps (RFC). The British Government declared the East coast of Britain a prohibited area. In order to defend the Royal Naval Fleet and their bases at Rosyth, Cromarty and Scapa Flow it was decided that the first of the new air stations would be located at Montrose. Being the first airfield, it should not be surprising that the airfield home to one of the oldest active squadrons in the world, II(AC) Sqn RAF.
On 13 February 1913, five aircraft of No.2 Squadron Royal Flying Corps, took off from Farnborough under the command of Major C.J. Burke and headed north to Montrose. The 450 mile journey was completed in a series of stages and took 13 days (it should be remembered that the Wright
brothers had only made their first powered flight just over 9 years prior to that on 17 December 1903). On 26 February the aircraft arrived at Upper Dysart Farm, 3 miles to the south of Montrose and the new home of 2 Sqn RFC. Major Burke considered Upper Dysart to be less than ideal for an airfield and after surveying the area found a new location at Broomfield Farm, 1 mile to the North of Montrose.
At the end of 1913 three large hangers of Indian Army Shed design (known as 'Major Burkes sheds') were erected at Bloomfield. In the new year of 1914 No.2 squadron relocated there. World War I started on 28 July 1914 and in August II(AC) Sqn moved to France, during their absence the station was the birthplace of several new squadrons. 25 Sqn formed on 25 September 1915, 83Sqn formed on 7 January 1917 and 80 Sqn on 1 August 1917.
On 1 April 1918 the Royal Flying Corps merged with the Royal Naval Air Service (RNAS) to become the Royal Air Force (RAF), the oldest Air Force in the world .
When the war ended, the airfield was closed. 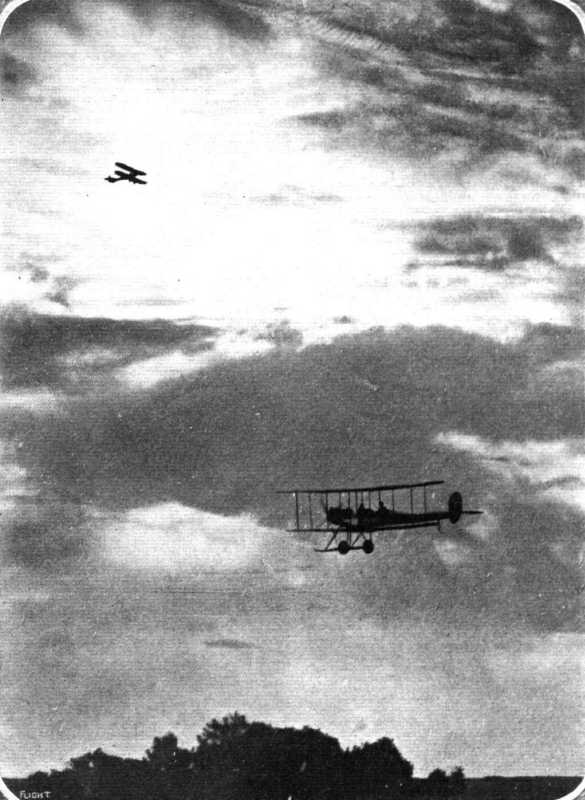 In 1935 the British government decided to expand the RAF in the face of a growing threat from Germany. A key requirement was for more trained military pilots. RAF Montrose, virtually unchanged from the First World War, was re-opened on 1 January 1936 as 8 Flying Training School. Between that date and the end of the Battle of Britain an estimated 800 pilots trained and got their 'wings' at Montrose though not all of these became fighter pilots. Many of the British WWII Fighter Aces were trained at Montrose. Many Allied and nationals were to serve and train there, including Polish, Czech, American, Russian, Turkish and Free French personnel. A bombing raid by the Germans in 1940 led to the loss of 6 personnel from the station. Units that trained at Montrose were 111 Sqn, 603 (City of Edinburgh) Sqn, 248 Sqn, 141 Sqn, 145 Sqn, 232 Sqn.
Besides serving as a training base, Montrose also served as an operational airfield for Hurricane and Spitfire squadrons which formed part of the air defences for Edinburgh. Its aircraft flew regular mission over Norway.
After the war, the airfield became home to 63 Maintenance Unit, but as there were no tarmac runways, aircraft for repair were brought in and shipped out by road. As a result, the airfield was permanently closed on 4 June 1952. 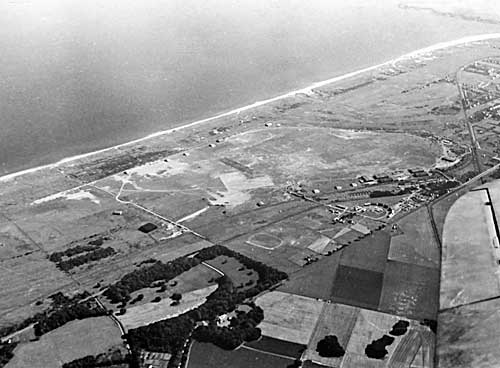 Montrose at some time during World War II 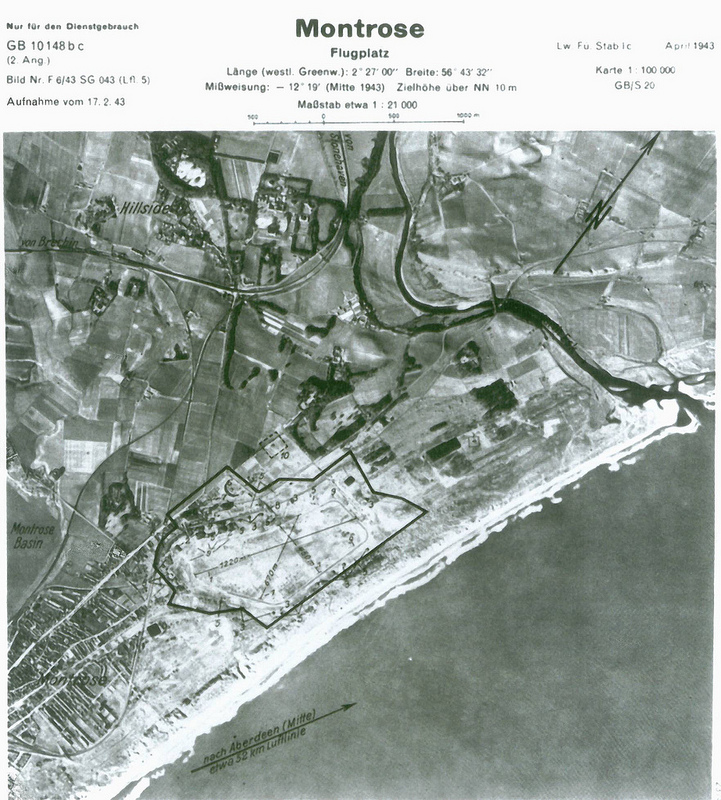 The Germans were still carrying out reconnaissance missions in Scotland as late as April 1943, as is proven by this Luftwaffe photo (Flickr).

In 1983 a group of local enthusiasts grouped together to ensure that the history of RAF Montrose would not be forgotten. A local man, Ian McIntosh, established the Montrose Air Station Heritage Trust (today known as the Ian McIntosh Memorial Trust). Also, money was raised by the Montrose Aerodrome Museum Society. In 1992 the trust purchased the Watch Office and ground which became the Montrose Air Station Museum. Over the years the museum has added more buildings to house its increasing collection of artefacts, memorabilia and models. Several historic buildings and hangars are still located at the former airfield. The stations perimeter taxi track is still largely intact. The flying field, however, is not, owing to many decades of neglect. 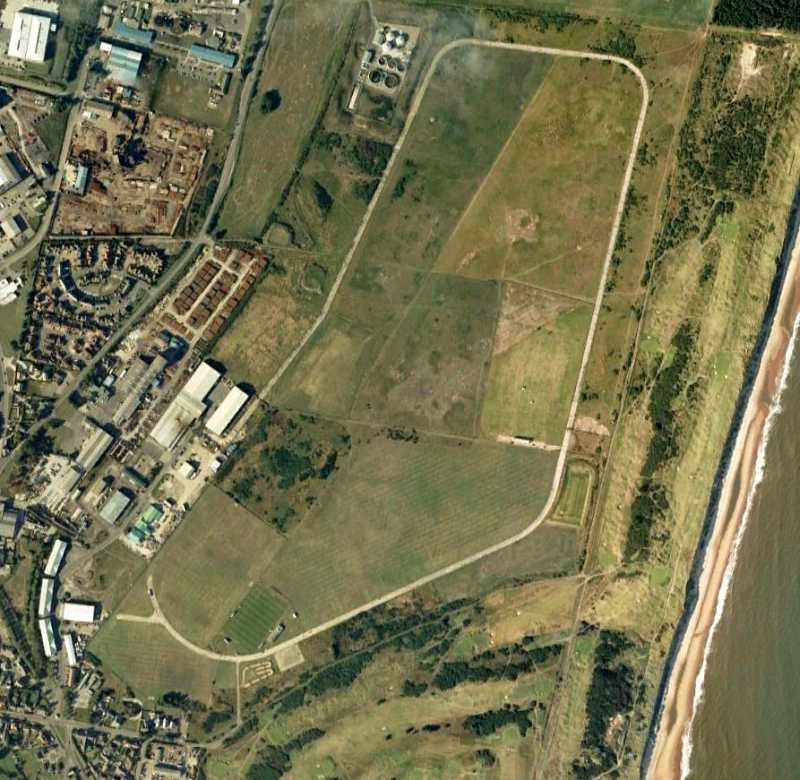 Aerial photo of the former airfield in 2006 (Google Earth)