Munich-Riem airfield (German: Flugplatz München-Riem) was an airfield on the eastern outskirts of Munich, Germany.
The airfield was built between 1936 and 1939, and it was expected to open on 1 September 1939. The outbreak of World War II prevented this however, so instead it opened on 25 October 1939 when a Lufthansa Ju52/3m from Berlin landed. At the time, it was one of the most modern airports in the world, replacing Munichs old Oberwiesenfeld airfield. One of the first to use the new airfield was Adolf Hitler, in his personal FW-200 on 11 November 1939.
Almost immediately it was recognised that the airfield would not be able to grow much because of surrounding villages.

During the war Munich also served as a military airfield. Near the end of the war Munich-Riem was briefly home to General der Jagdflieger (General of Fighter pilots) Adolf Galland's Jagdverband 44 (JV44). The airfield was almost completely destroyed by bombings on 9 April 1945. The United States Rainbow Division was the first of the allied forces to arrive at the airport, reporting that the airport had been abandoned by the Germans. 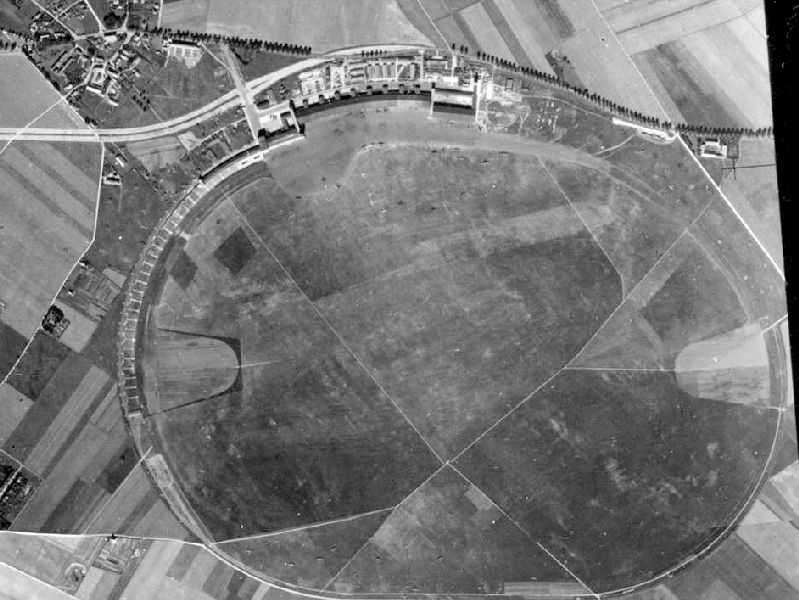 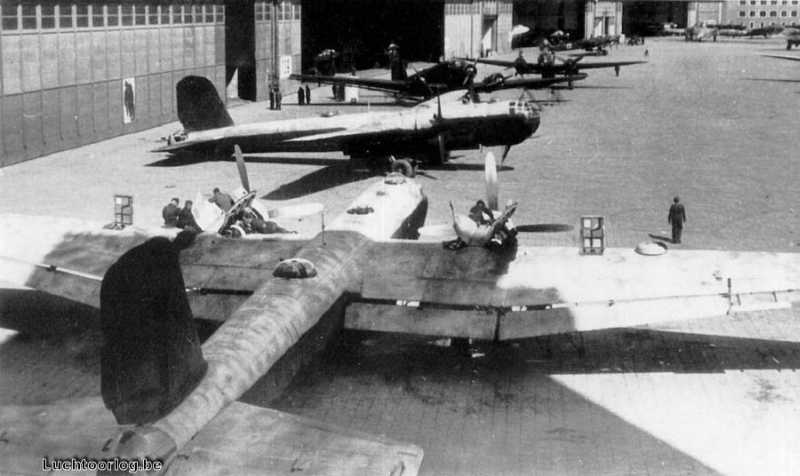 Two He-177A-5 'Greifs' and several other aircraft in front of the hangars at Munich Riem in March 1944 (Luchtoorlog.be). 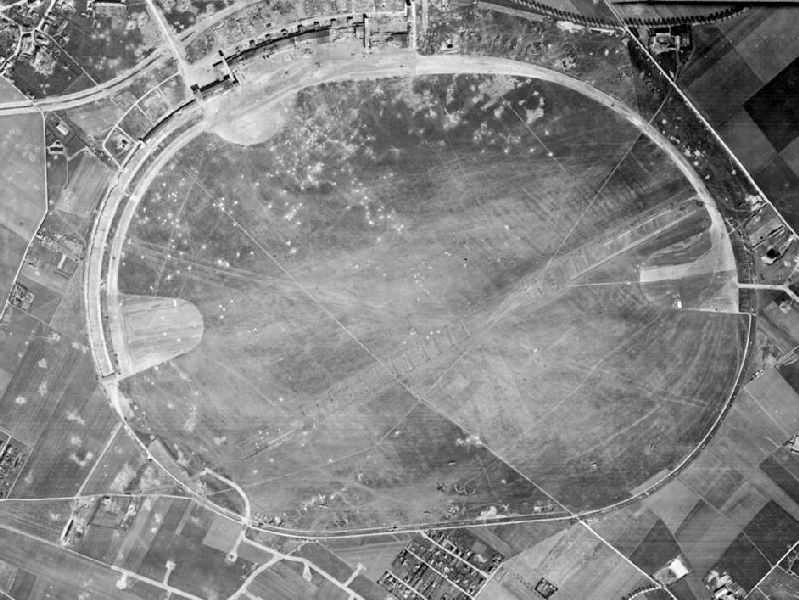 This allied reconnaissance photo of Munich-Riem in 1945 shows the results of visits by Allied bombers: craters all over the north side of the airfield and destroyed station buldings and hangars. A runway is also recognisable, it was probably built for use by the Me-262 jet fighter.

After the end of the war, Munich-Riem was the first airport in Germany to be used for civil aviation.
Post-war operations started on 6 April 1948 with the landing of a DC-3 operated by Pan American World Airways from London.
KLM Royal Dutch Airlines opened services from 6 May 1948 to Amsterdam and Stuttgart.
USAF aircraft left the airfield on 30 May 1948.
On 22 June 1948 the Munich City council signed an agreement with the Office of Military Government for Germany to take over the management of the airport.
The agreement came into effect on 9 November 1948.
Construction of a 1907x60meter runway was completed on 22 November 1949.
KLM began services to New York (by Lockheed Constellation) in 1951, launching intercontinental flights from the airport.
In 1953 the US armed forces units began leaving the airfield.
Lufthansa started offering regular services (to Hamburg) on 1 April 1955.
A lengthened runway was taken into service on 29 October 1958, allowing jet operations from 2600 meters of concrete.
That same day a Sud-Aviation Caravelle of Air France was the first jet aircraft to land in Munich.

Airspeed Ambassador G-ALZU at Munich Riem on 6 February 1958. The aircraft had made a refuellling stop on its route Belgrade-Munich-Manchester. Later that day it crashed on takeoff due to heavy sludge on the runway, killing 23 of the 44 on board, including a large part of the Manchester United football team (thefootballasylum.com).

Munich-Riem, 1963. Clearly visible is the new lengthened runway, completed in 1958

In 1962, more than one million passengers had passed through the airport.
As early as in 1963, the Öchsle Commission initiated a search for a new airport location as it was obvious that further extension would not be legally or politically possible. A number of accidents had encouraged the decision to build a new airport further away from the city and nearby communities, and to close down Riem. Investments in the infrastructure continued however: in October 1965, a new maintenance hangar for jets, that had been built at a cost of DM 10 million, was put into operation and transferred to Lufthansa.
In 1969, the 'Flughafen München-Riem GmbH' was renamed 'Flughafen München GmbH', and its main runway (07R/25L) was upgraded to its final length of 2,804 meters (9,199 ft). In 1971, with the total passenger throughput having reached 4 million, a new arrivals hall was put into operation. On 31 July 1982 a bomb attack on the departure area for passengers to Israel caused seven people to be severely wounded.
By 1991 the airport was serving twelve million passengers, far beyond its intended capacity. An efficient taxiing system was no longer possible. In order to allow operations to continue, temporary annexes to the terminal had been built, including a dedicated hall for charter flights.
During the night of 16 to 17 May 1992, operations moved to the new Munich Franz Josef Strauss Airport near Freising. The IATA airport code MUC and the ICAO airport code EDDM also moved to the new airfield. The last aircraft (Lufthansa Boeing 737 D-ABJD 'Freising') left the old airport at 22:55 of 16 May 1992. The occasion did not fully close the airport however. Until August 1992 Munich-Riem remained on standby as a backup for any problems at the new airfield. The terminal building of Flughaven München in 1992, the last year it was in operation (Wikipedia) 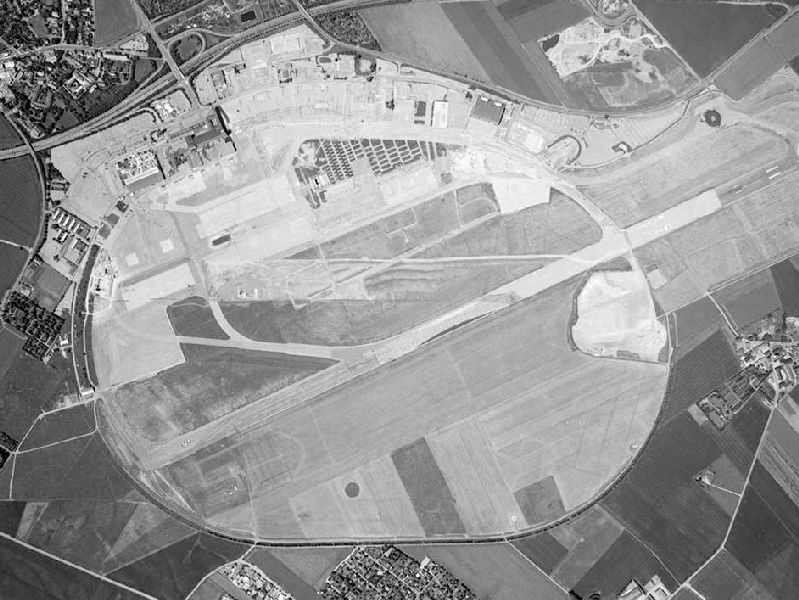 The former Munich-Riem in 1994, two years after it was closed (Google Earth)

For some time the former airport was used for rock-concerts and dance-events under the name Kulturzentrum Riem (Culture Centrum Riem). Rockband Nirvana played its last concert at the former airfield on 1 March 1994, for instance.
The cultural center was closed in 1996, when the premises were converted into Messestadt Riem (Convention City Riem). The transformation of the former airport to Messestadt Riem with its name-giving convention centre, apartment houses and parks was one of the largest projects in urban planning of the City of Munich in the late 1990s and at the beginning of the 21st century.
The only airport structures that remain today are the tower and the original terminal building, known as the Wappenhalle (the Hall of the coats of arms). Both buildings are protected monuments. The badly deteriorated remains of public viewing grandstands remain on the west side of the former airfield.
Finally, a roughly 50x50m section of the runway remains on the east side of the airfield.

A good series of photos of the airfield throughout the years van be viewed at flughafen-riem.de. Munich-Riem in 1999, when construction of the Convention Center had begun (Google Earth). 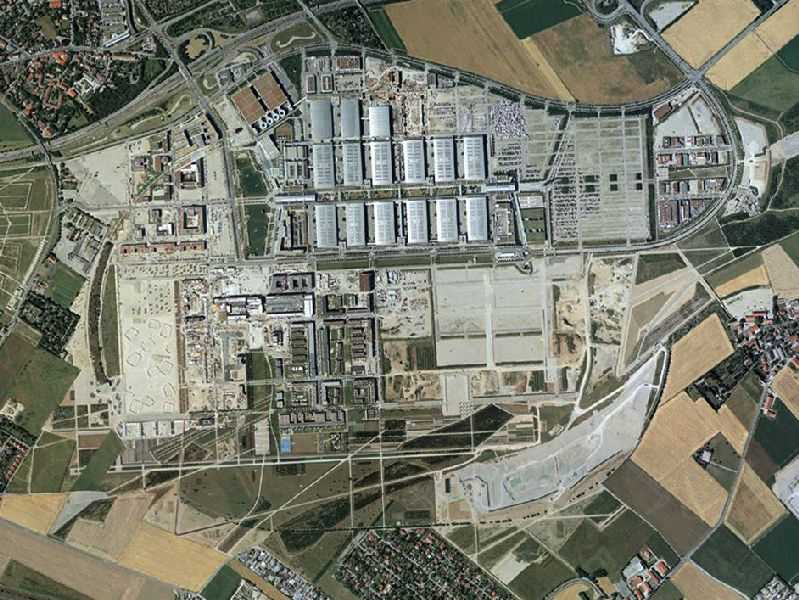 Progression of the Messestadt Riem project in 2003 (Google Earth). 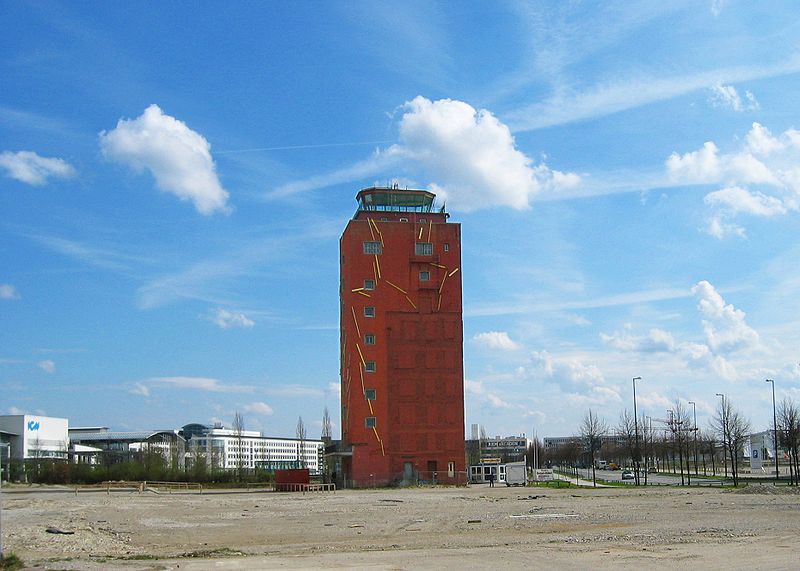 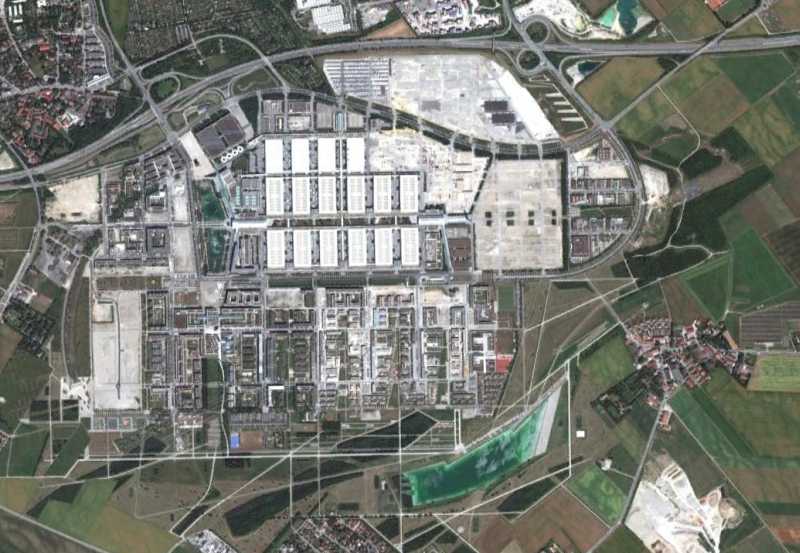 Messestadt Riem in 2010, with only a 50x50meter patch of the runways still visible to the east (Google Earth). 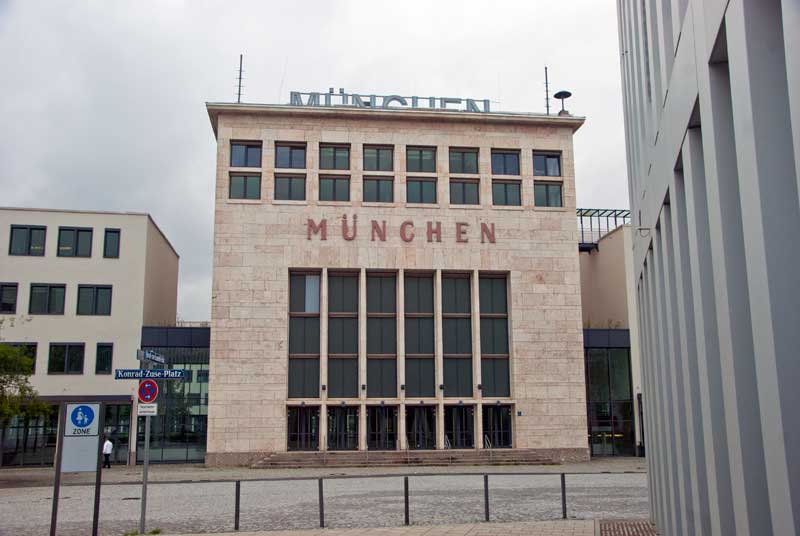 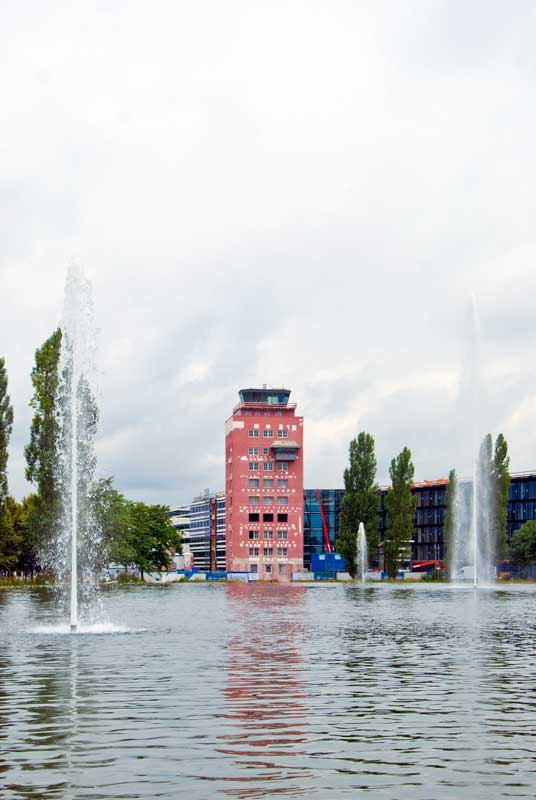 The control tower was under renovation in August 2016. It is seen here from the south, where the platform has been replaced with a large pond with fountains and filled with carp and ducks (RonaldV). 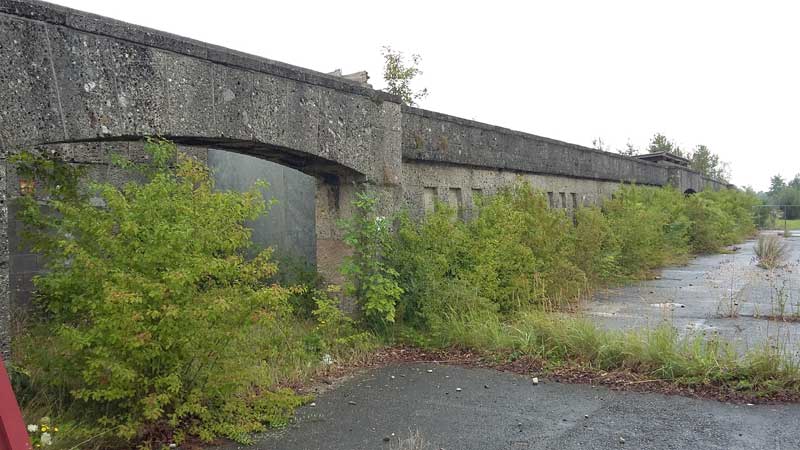 The spectator stands to the west of the airfield still existed in August 2016, albeit fenced off and in a derelict state (RonaldV). 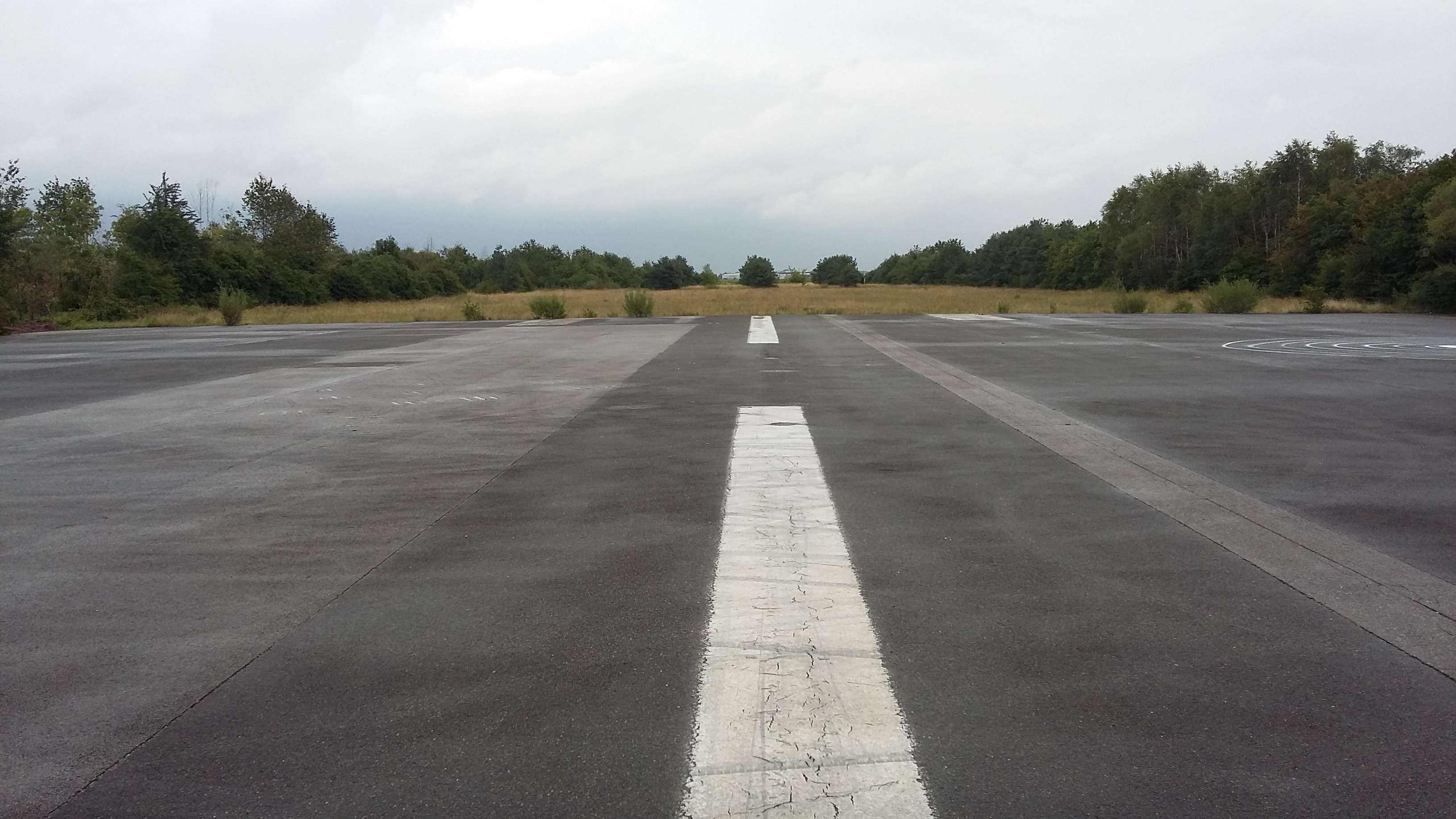 The remaining 50x50m of runway had become part of a nature preserve when this photo was taken in August 2016 (RonaldV).