Airbase Neubiberg (Flugplatz Neubiberg, also known as Flugplatz Unterbiberg, ICAO: EDSN until 1991, EDPN for Ultralight operations until at least 2012) was an airfield in the south of the greater Munich (München) area in Bavaria, Germany
The airfield was founded in 1933 as a glider field, but became an active Luftwaffe air base called Unterbiberg during World War II. Amongst others the Luftwaffe operated the Me-262 Jet fighter from the air base in 1944. The USAAFs 15th Air Force bombed the airfield on 16 February 1945. It was captured by the Americans in April 1945 and after its capture the USAAF designated the airfield R-85 Camp Rattle. 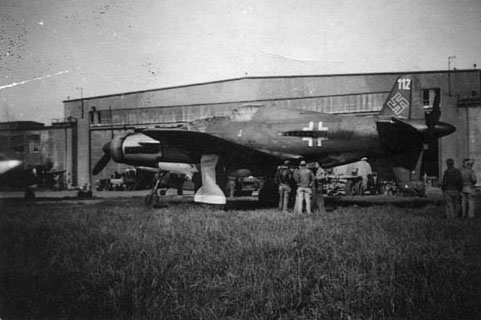 Dornier-335A-12 (240112) at Neubiberg shortly after the war ended. This aircraft was transferred to RAE Farnborough in the UK for evaluation and crashed there, killing the pilot. 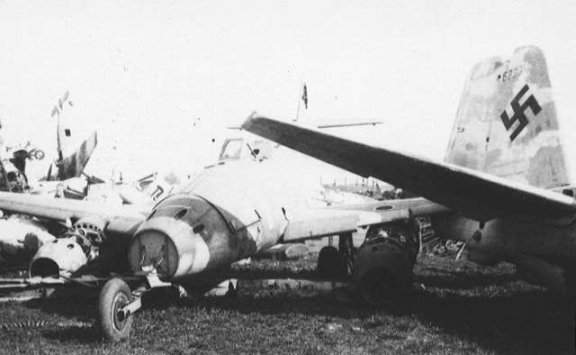 In July 1945 the 357th FG (P-51D) transferred from RAF Leiston to Neubiberg to take on occupation duties until deactivated in August 1946. They were replaced by the reactivated 33th FG (P-51D), until they were transferred to Bad Kissingen a year later. Their successors came from Bad Kissingen in the form of the 86th Composite Group (P-47D), initially flying occupation missions, but also flying escort duties for RB-24 Liberators flying along the Czechoslovak border and the Russian occupation zone. During those escort flights, they would occasionally engage Soviet aircraft that harrassed the RB-24s. Their mission changed with the start of the Berlin Airlift, at which time they were the only tactical USAFE air group.
When the 27th Escort Fighter Wing delivered 91 F-84E Thunderjets to Neubiberg the 86th Composite Group was renamed to 86th Fighter Bomber Group in October 1950. In January 1953 the 86th, now renamed Fighter-Bomber Wing, relocated to the newly completed Landstuhl Air Base. The 160th Tactical Reconnaissance Squadron (RF-80C) had already taken over Neubiberg when the AL ANG unit deployed to France. As their new base in France was not yet completed, theit parent Wing HQ (117TRW) was in France, while the squadron deployed to Neubiberg. When their Wing renumbered and moved to Spangdahlen Air Base in May 1953, they renumbered and moved to Spangdahlen too. 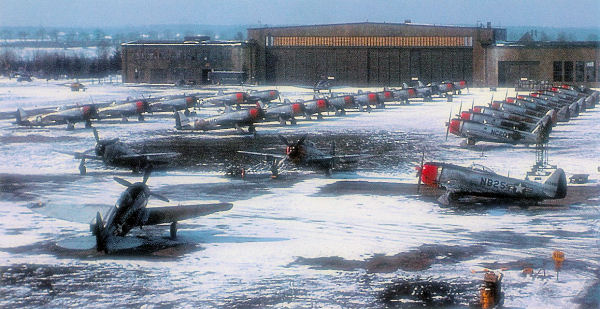 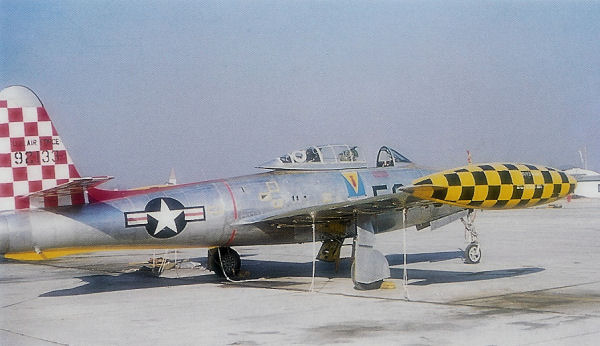 Neubiberg became a transport base on 14 July 1952 when the 317th Troop Carrier Wing moved in with three squadrons of C-119C Flying Boxcars. They were forced to leave Rhein-Main Air Base when that air field became overpopulated. And lastly the airfield was home to the 5th Tow Target Squadron, which provided target banner towing duties all over Europe with detachments in Bremen, RAF Sculthorpe and North Africa. This was a very diverse unit, flying B-26 (A-26) Invader medium bombers, B-29 heavy bombers, C-47 transports and L-5 Sentinels, which remained at Neubiberg until the airfield was turned over to the German Air Force. 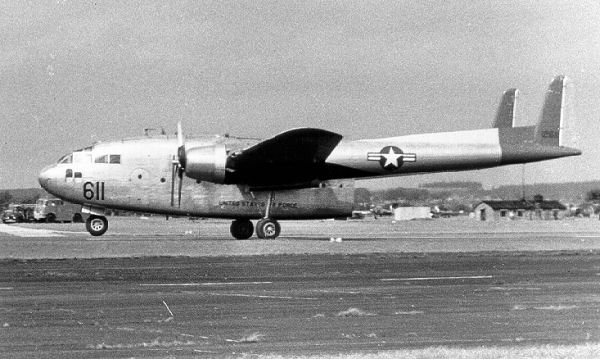 The German Air Force accepted Neubibereg in 1958. At the base they stationed the Officers School and an Air Transport Wing (German: Lufttransportgeschwader-61 or LTG-61) flying C-47s and later Noratlasses. When the Luftwaffe began to receive larger C-160 Transall cargo aircraft they lenghtened the runway to the west over the nearby Autobahn. The Officers School moved to nearby Fürstenfeldbruck in 1973, to make room for the University of the Bundeswehr (German Federal Ministry of Defence).
After the fall of the Berlin Wall and the reunification of Germany the military airfield was closed. It remained in use with civil aviation and Police helicopters however. For the purpose the runway was split in two, giving the airfield two runways on a single surface. It closed as an airfield altogether in 1998, but much of the infrastructure is still intact, and in use with University of the Bundeswehr.
The terrain and the runway are now primarily used as a publicly accessible leasure area called "Landschaftspark Hachinger tal", although until 2012, the runway was also in use for outdoor experiments of the University. The airfield retained an ICAO code because of Ultralight activity at the former airfield. The airfield is now definately used as an leisure area, although the runway is not marked with large 'X'es to indicate it is closed. Some parts are restricted nature resorts, specially for birds breeding on the grounds. There are beach volleyball fields, a skating park and a part is now used as a cementry. 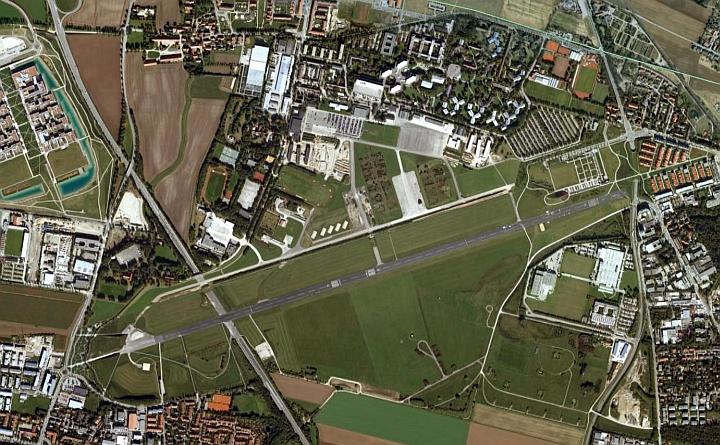 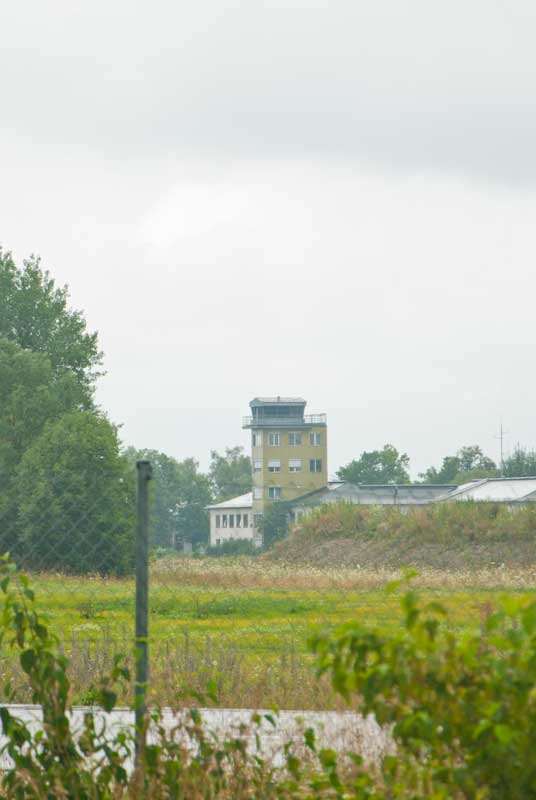 The tower still appeared to be intact at the Neubiberg Luftwaffe University campus in August 2016 (RonaldV). 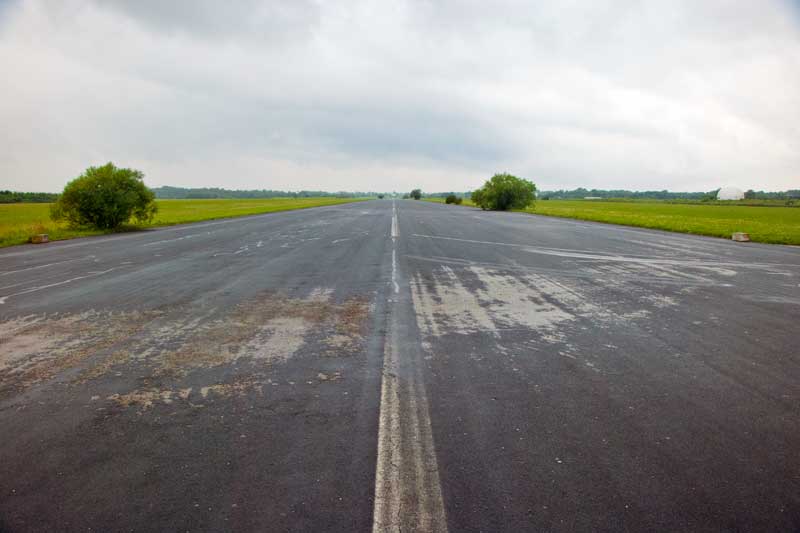 A look down runway 25 shows some work needs to be done before Neubiberg can be reactivated: Trees and scrubs need to be removed and modern fighter jets would require a new top layer of asphalt (August 2016, RonaldV). 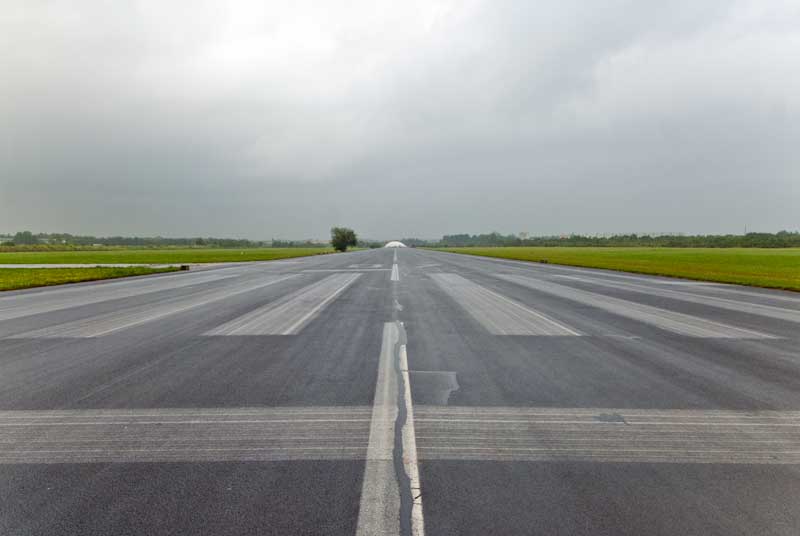