Airfield Nicosia (Greek: Διεθνές Αεροδρόμιο Λευκωσίας, Turkish: Lefkosa Uluslararasi Havaalani, also known as Nicosia International Airport, or RAF Nicosia, ICAO: LCNC (struck by ICAO/UN)) is an airfield on the west side of Nicosia in Cyprus.
The airfield was built in the 1930s by the Royal Air Force. Its landing strip was constructed in 1939 Shell Company and Pierides & Michaelides Ltd. Services were provided by Misrair with four-engined DH.86 aircraft.

During World War II the airport and its facilities were upgraded by local contractors. It served as a stopover for USAAF bombers that took part in the Ploesti air raid in Romania. RAF units operating from the base were:
74 Sqn flying Spitfire V, later Mk IX from September 1943.
80 Sqn flying Hurricane MkI from June 1941.

RAF Nicosia attracked aircraft from all over the Eastern Meditteranean, and even further away.
Below an impression of types that were secretly (photography on the airfield was prohibited in those days) shot in the late 1950s. 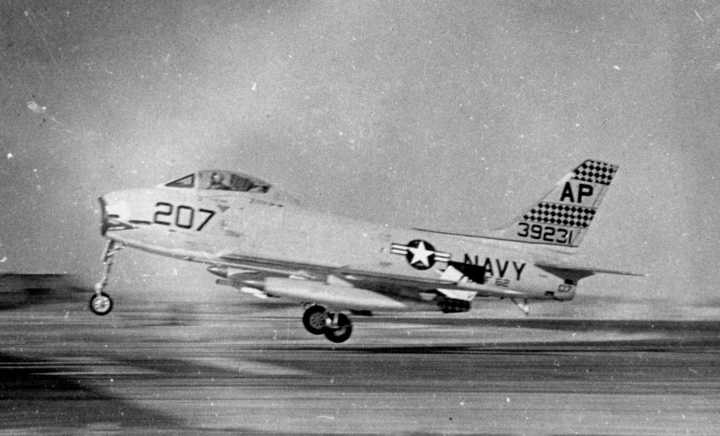 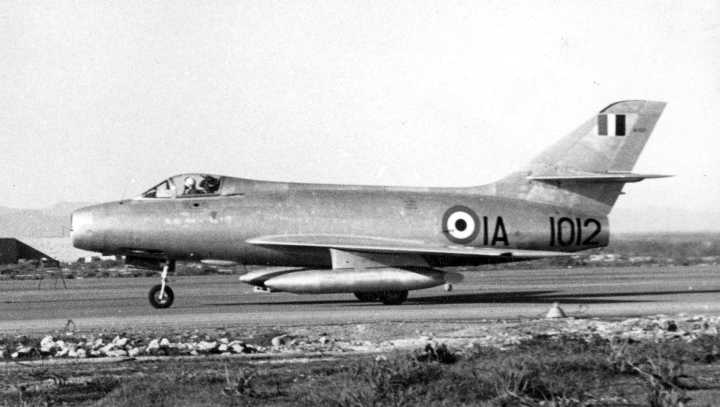 Dassault Mystère destined for the Indian Air Force on a delivery flight, ca 1958 (Glyn Ramsden, via The Aviation Forum).

A Brittannia of BOAC at Nicosia, ca 1959 (Glyn Ramsden, via The Aviation Forum). 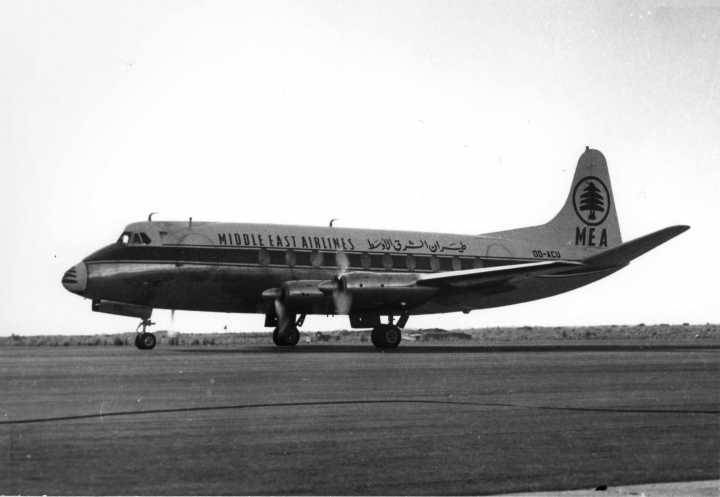 In 1948 Misrair (Egypt, today better known as EgyptAir), BOAC (Great Britain, merged into British Airways), Cyprus Airways (Cyprus) and MEA (Lebanon) served the civilian side of the airport. As its facilities were limited due to its military ownership, the civilian operations were initially run from 3 Nissen huts. Catering services were provided by the NAAFI. In May 1949 the first terminal building was opened.
On 3 March 1956 a Handley Page Hermes IV (G-ALDW operated by Skyways Limited) was destroyed on the ground when an time-bomb went off. This occurred 20 minutes before the aircraft was due to depart for the United Kingdom with 68 passengers. On 27 April 1956 a RAF Douglas Dakota was destroyed on the ground by a bomb thought to have been placed by EOKA fighters.
The airfield and the aircraft apron were expanded in 1959.
On 20 April 1967 a Bristol Britannia crashed while on approach to the airport in bad weather, killing 126. 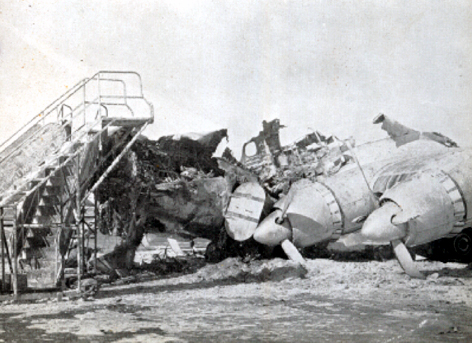 The remains of Skyways Hermes G-ALDW after it was bombed in 1956. Had the aircraft taken off as planned, the two time bombs would have taken the lives of 68 people, mostly women and children.

The RAF withdrew from the airfield in 1968 because of the sheer increase of civilian activities at the airfield. The terminal building was transfered to the Nicosia Flying Club and other organisations when the new terminal building opened in 1968. It had cost £1,100,000 sterling, of which £500,000 was contributed by Britain. The new facility could handle 800 passengers at one time with 11 aircraft on the apron.
On 29 January 1973 an EgyptAir Ilyushin Il-18 (SU-AOV) crashed into the Pentadaktylos mountain range on approach to Nicosia killing its 7 crew and 30 passengers. On 29 August 1973, a Czechoslovak Airlines Tupolev Tu-104, flight CSA531 from Damascus, overran the runway upon landing. No fatalities were reported on the flight, but the wreckage on the aircraft still lies at the end of the runway.
In June 1974 plans were announced to expand the terminal and the platform yet again. On the apron room was foreseen for 16 aircraft, 2 of which could be widebodies. The plan never materialised though, because of political changes in the country. The departure hall of the airport around 1970

On 15 July 1974 right wing Greek nationalists overthrew the democratic elected president of Cyprus. The airfield was closed for two days, and when it reopened it was used to ferry troops from Greece to the island to support the coup. On 18 July it reopened to civilian traffic. Chaos came to the airfield, as holidaymakers and other foreigners tried to leave Cyprus.
Turkey invaded Cyprus on 20 July 1974 and bombed the airport into closure. During the invasion, one of the main Turkish objectives was the airport. Two parked Cyprus Airways airliners, Hawker-Siddeley HS121 Trident 1E (5B-DAE) and Trident 2E (5B-DAB), were destroyed. Several aircraft were stuck at the airfield, including the entire remaining fleet of Cyprus Airways. The airfield became the scene of some of the heaviest fighting between Cypriot and Turkish forces on the island. The UN commander was able to negotiate a local cease-fire and withdrawal of Greek and Turkish forces from the airport area, which the Canadian UN troops then occupied. However, the Turks still threatened to attack the airport. The defending Canadians had only a few anti-tank weapons and heavy machine guns, but the strategic thinking Canadians moved around the airport, under cover of night, to create the illusion that the airport was heavily defended. A Greek commando unit was sent to the airfield under Operation 'NIKI' (Victory) in 20 Nord Noratlas and 10 C-47 Dakotas. Their mission lead to 4 C-47s and 2 Noratlas lost and 33 people getting killed, in part due to friendly fire.
The UN Security Council declared the airfield a UN Protection Area (UNPA) on 23 July 1974, requiring both parties to withdraw to at least 500m from the airfields perimeter. The airport has been inoperable as a fully functioning airport ever since the 16 August 1974 ceasefire.

The airfield became part of the UN Buffer Zone that seperates the two communities on Cyprus. Although its ICAO designator was struck and airlines cannot serve it, it is still being used though. UN helicopters are based at the airfield, which also serves as the UN peace mission HQ (UNFICYP). It is also one of the sites for intercommunal peace talks, and UN recreational facilities are located there.
The last civilian flights out of Nicosia took place in 1977 under a UN Special Autorisation. The three remaining Cyprus Airways aircraft were flown to London by British Airways engineers for repairs after having been stranded since 1974. 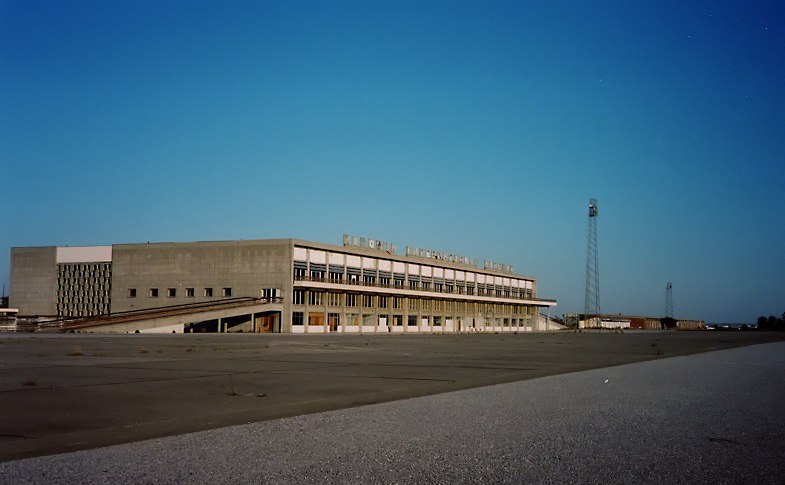 The role of Nicosia was taken over by Larnaca (for the Greek part) and Ercan (for the Turks), both former RAF airfields. Plans to reopen Nicosia under UN control as a goodwill measure were never seriously considered by both sides.
Although the RAF left the installation in 1966, it is still owned by the British Ministry of Defence. It is controlled by the United Nations Peacekeeping Force in Cyprus (UNFICYP) however.
Three aircraft (or their remains) are still at Nicosia:
An almost retired RAF Shackleton MR.3 (XF700) was flown to Nicosia in the early 1970s for use as a fire dump trainer. She was parked ready for training use when the Turkish invasion occurred. Its tail sections have fallen off and a tree is growing through her.
On the northern platform one HS Trident (5B-DAB) of Cyprus Airways remains. Although the fuselage looks fairly complete, it is unlikely it will ever fly again should a solution be found for the Cyprus issue.
Finally the wreckage of the CSA Tu104 that crashed at Nicosia in 1973 is still located north of the airfield.

The abandoned Trident on the platform at Nicosia (Dick Elbers under under the Creative Commons Attribution-Share Alike 3.0 Unported license, click for Wikipedia) 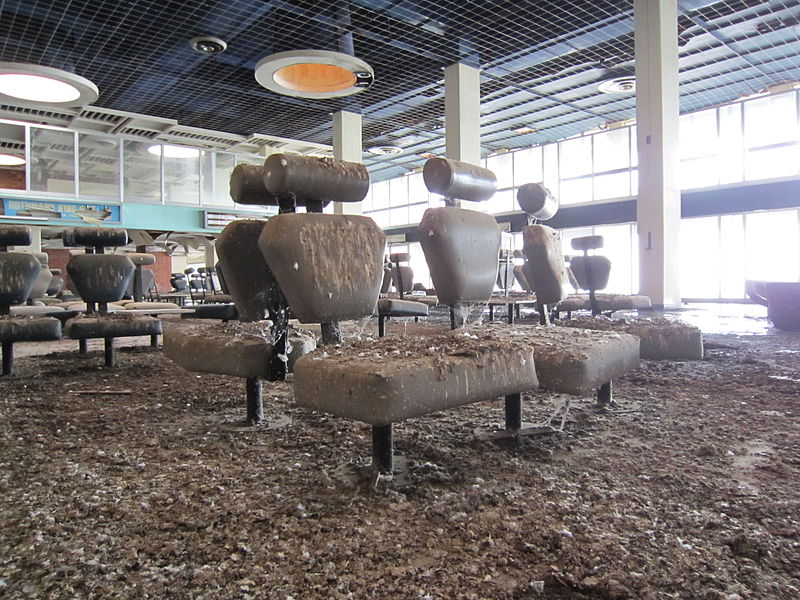 View inside the Airport terminal in the United Nations Buffer Zone in Cyprus (Dick Elbers under the Creative Commons Attribution-Share Alike 3.0 Unported license, click for Wikipedia). 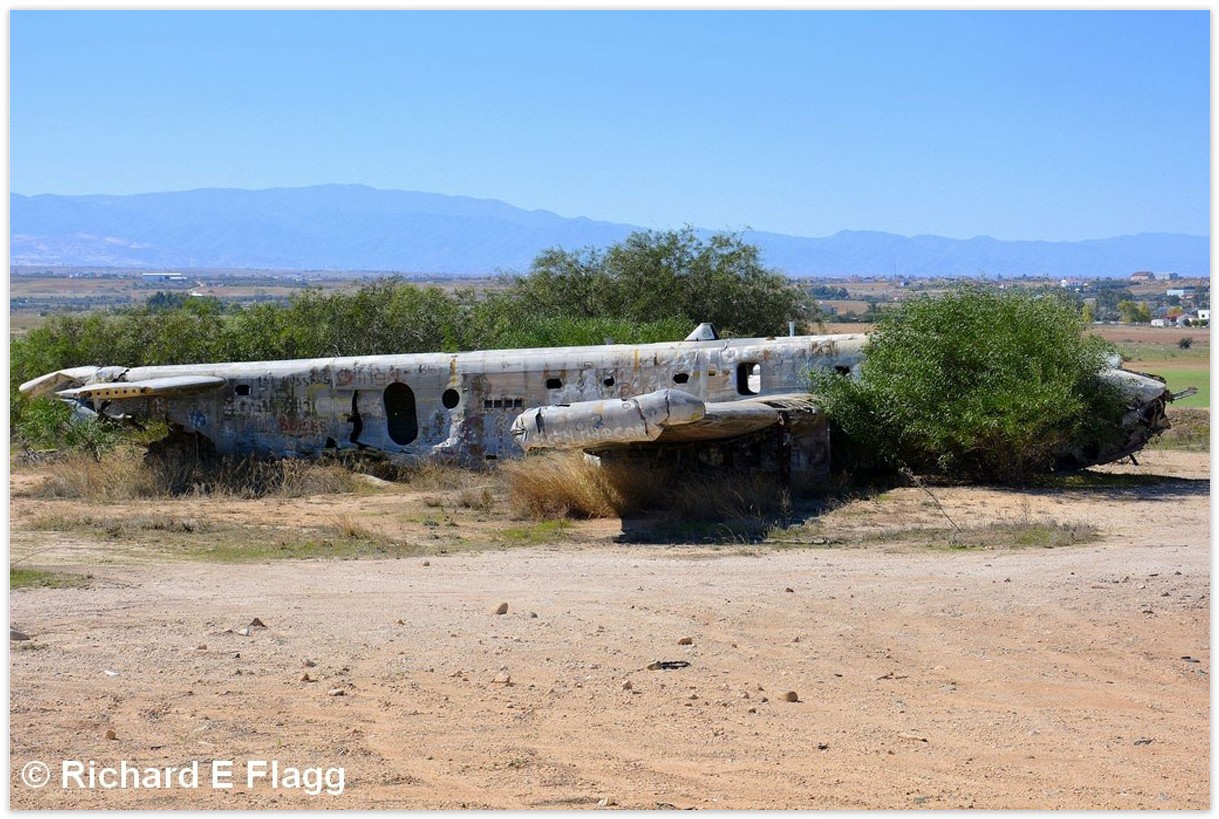 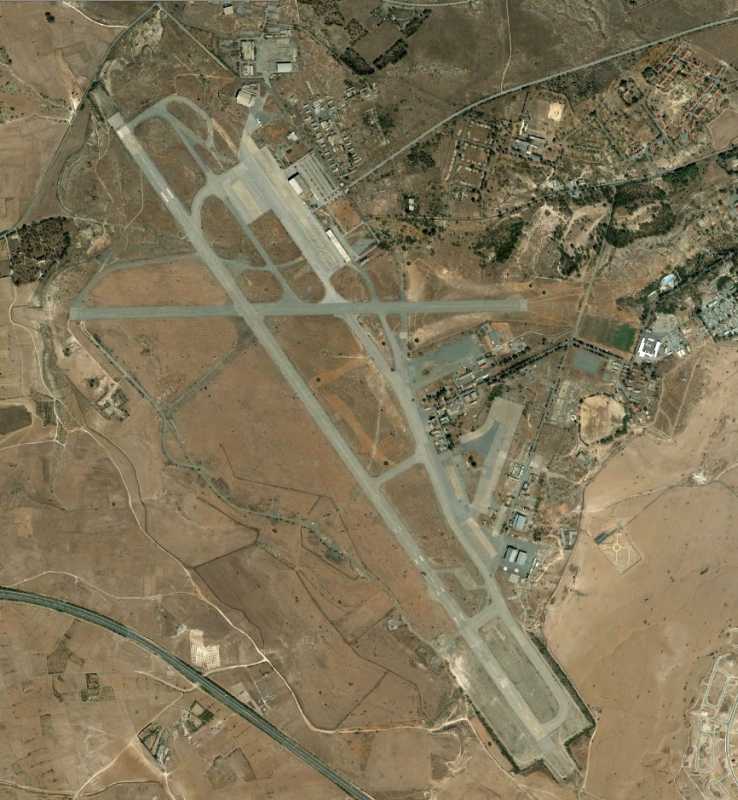 Nicosia International as it has been since 1974 (Google Earth). 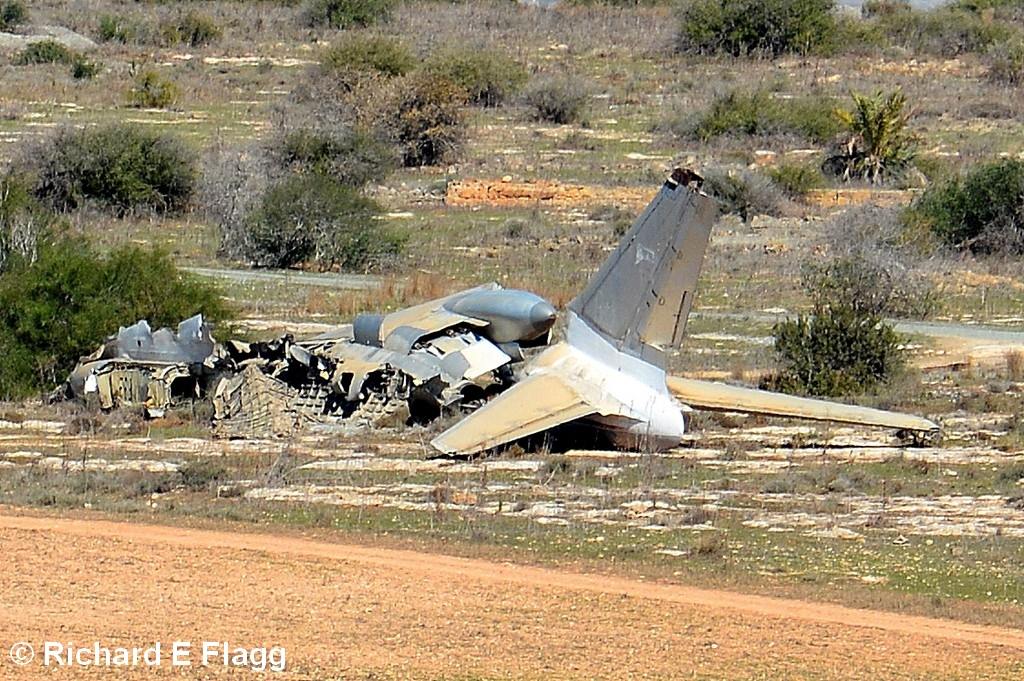 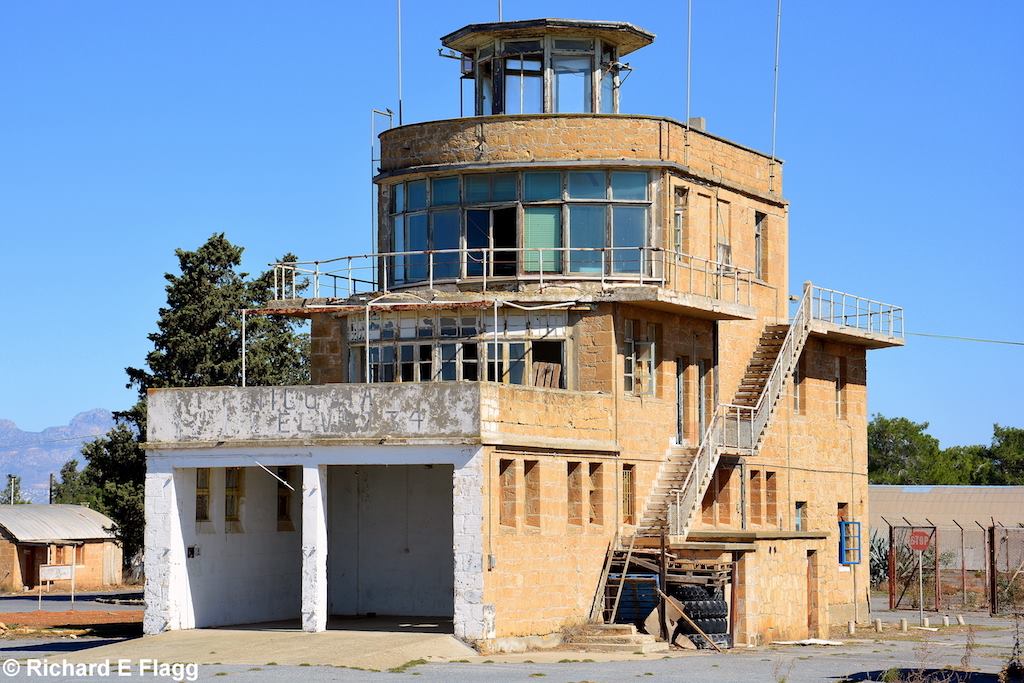 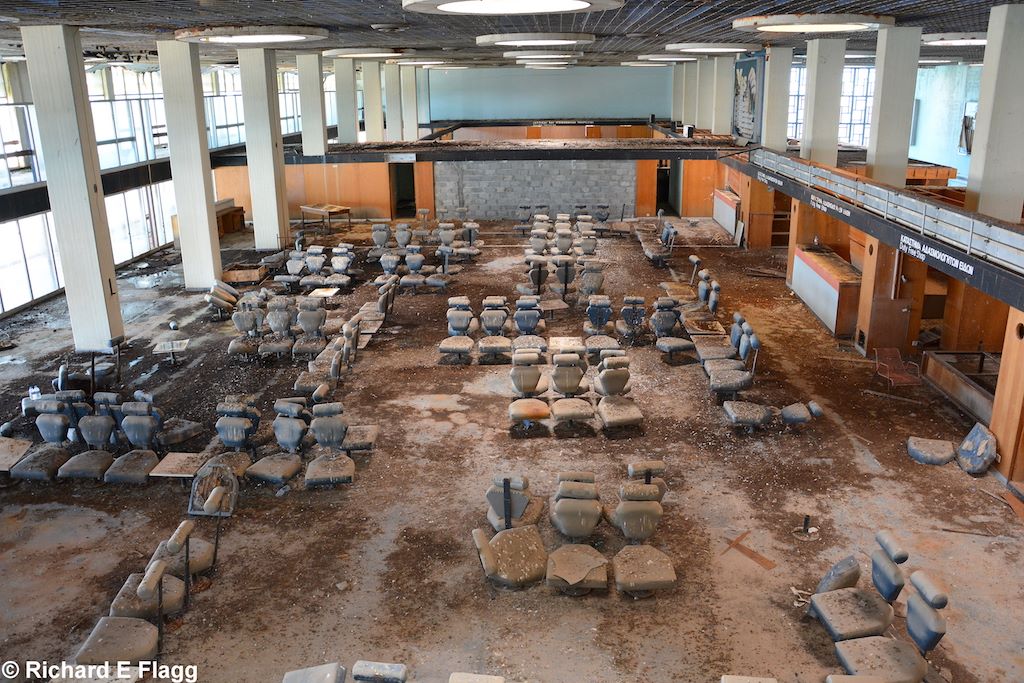 ;the inside of the terminal building in October 2014 (R.E. Flagg, used with permission) 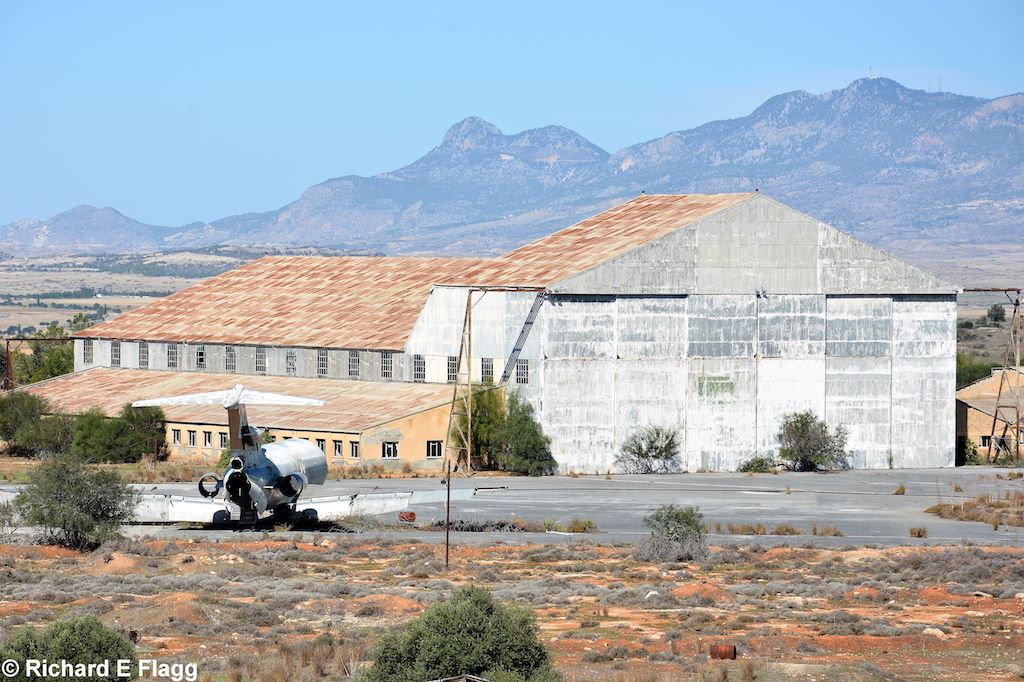 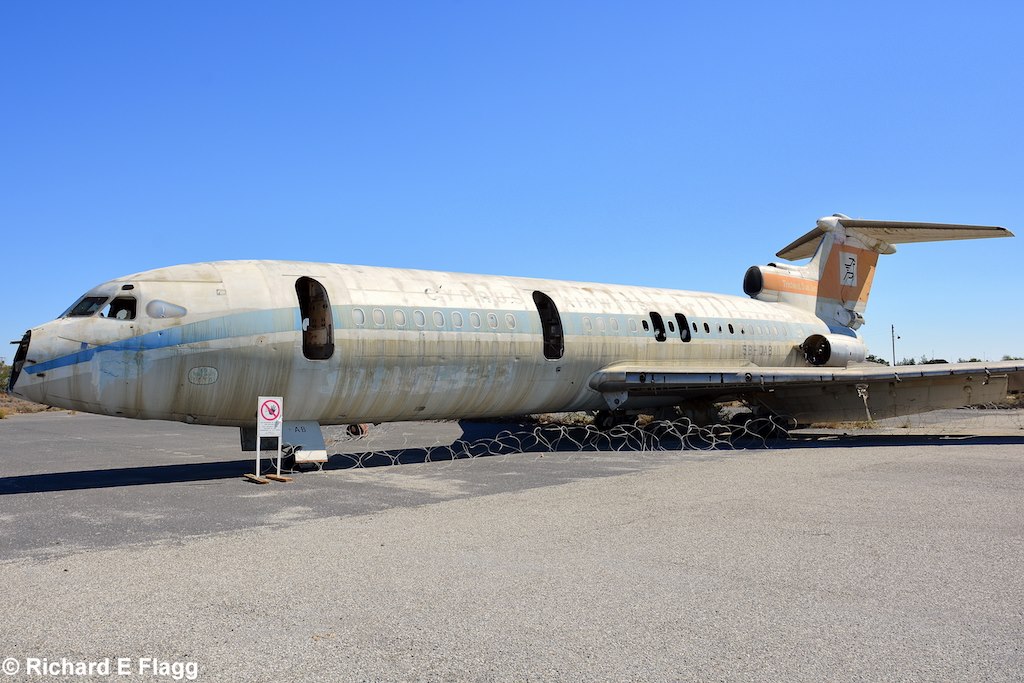 NOTE: Nicosia airport is in the middle of a UN buffer zone. UN buffer zones exist for a reason. You may or may not agree with their existence, but they are controlled areas where civilians have no business. If you consider making an Urbex-trip to Cyprus, reconsider. You may cause an incident between the UN, Cyprus, Turkish Cyprus, Turkey and/or Greece which may result in bodily harm or death(s). If one of those deaths is an urbexer: good. In controlled zones like these I have no mercy for you or your companions. The photos you see on this page were shot by authorised personnel, NOT by urbexers.