Ophoven Airfield was a World War II military airfield approximately 85 kilometer northeast of Brussels.
It was located in the municipality of Opglabbeek (Limburg) and liberated on 15 September 1944 by the 82nd Armored Reconnaissance Battalion of the 2nd US Armoured Division ('Hell on Wheels'). RAF engineers visited the selected airfield site shortly thereafter, possibly to start some work. The US 820th Engineer Aviation Battalion took their place on 24 November 1944 and started to construct a new airfield. The 852nd, 826th and 846th Engineer Aviation Battalions later assisted them throughout the next winter and spring. No. 6610 Service Echelon, RAF, provided further assistance for airfield servicing. Although not completed yet, the field was declared operational on 10 December 1944.  The airfield was first used as a resupply and casualty evacuation airfield, with C-47 Skytrain transports flying in and out of the airfield frequently. After some indecisiveness, the airfield was assigned to the British with 125 Wing believed to be the first occupants in late December.

The RAF's 125 Wing spent time there from 31 December 1944 until 27 January 1945 as part of 83 Group, 2nd Tactical Air Force. It consisted of:
41 Squadron - RAF
130 (Punjab) Squadron - RAF
350 (Belgian) Squadron - RAF
610 (County of Chester) Squadron – AAF (Auxiliary Air Force, which is not RAF, nor Royal Auxiliary Air Force).
On 31 December 1944, 430 (Silver Falcon) Squadron RCAF of the Canadian 39 (Recce) Wing sent a detachment of 6 Spitfire FR XIV’s, 8 Pilots and photographic personnel from B.78 Eindhoven to Y.32 Ophoven. From there, this detachment had to carry out tactical reconnaissance sorties, in support of the XXX Corps mission to help drive back the enemy in the Ardennes.
In support of the Battle of the Bulge offensive, the Luftwaffe launched a series of attacks on Allied airfields and on 1 January 1945 thirty German aircraft attacked Y-32.
Heavy snowfall and ice often made the runways and taxiways at Y.32 unserviceable in early and mid-January 1945, so the Spitfires frequently diverted to the nearby USAAF airfield Y.29 Asch, and RAF Servicing Commandos were sent to Y.29 to service the aircraft.
From late January the airfield hosted 370 FG (P-47 Thunderbolts) and from February it also based 405FG (P-47 Thunderbolts).
Both units were tasked with disrupting German operations ahead of the front, strafing anything German they encountered. 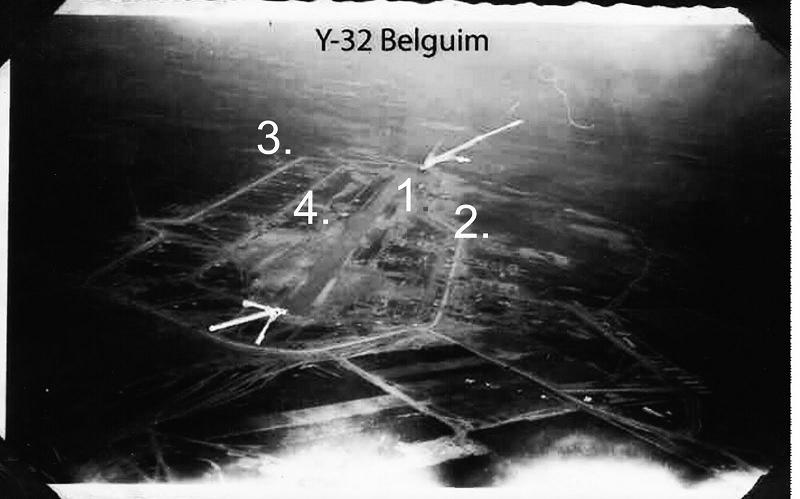 The fighter units moved out at the end of April 1945. With the end of the war in Europe the airfield was closed and abandoned in May 1945. Today, nothing reminds of the airfield, which is now partly agricultural field and an industrial area. 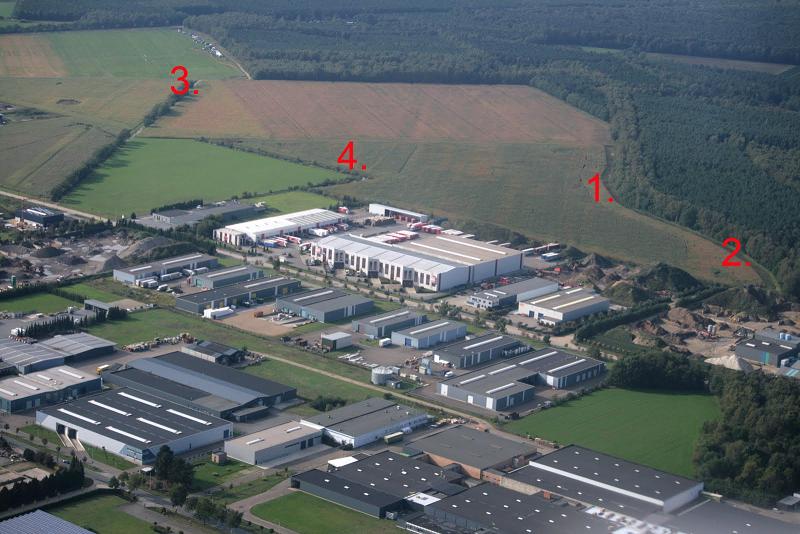 Ophoven in 2010. Note the markers, compared to the image above (Source). 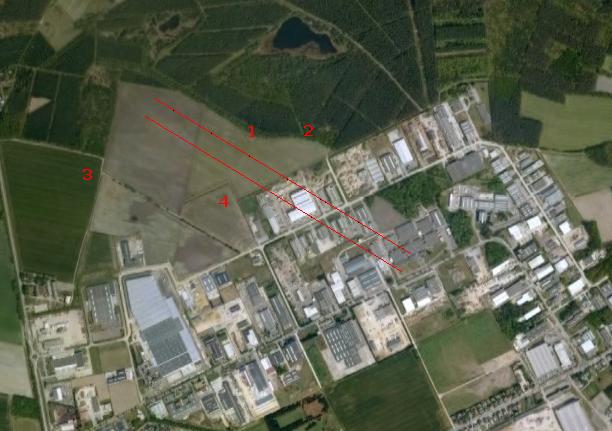 Ophoven in Google Earth, 2010. Same markers as to the images above.

Thanks to Jan Lantmeeters for pointing me to the correct position of this airfield and to Mrs Anne Crossman, whose website dedicated to her father, SqLdr Phil Tripe of 130 Sqn., provided much of the information you find here.