Port-Aviation (also known as Juvisy airport or Viry Chatillon airport and arguably the very first organized airport in the world) was located on the south side of Paris, about 4.5 kilometers south of the 02 treshold of todays Paris-Orly airport.
Port-Aviation's history began in 1908,  when powered flight, one of the largest dreams of mankind, had become a reality. The airfield was designed and built to overcome the various disadvantages imposed on the plain of Issy les Moulineaux and at the field of Vincennes which had been used to fly until then. These lands were in fact military manoeuvre areas that needed to be rent or borrowed at certain conditions and at certain times. This posed countless problems for the pioneers of aviation for the realization of a flight.
The airstrip itself included a signals mast, which could be considered an ancestor of the control tower, placed centrally on a circular grass airfield 3 kilometer in diameter. It was protected from the wind by the slopes of the banks of the Seine near of Viry Chatillon, Savigny and Juvisy.This protection against the wind was absolutely necessary to enable aircraft of the time to rise to 2 or 3 meters from the ground. Clearly this set up was designed to allow the organization of spectacular aeronautical meetings for many years. At the time, the technical progress of flight was not envisioned as something that would happen fast. 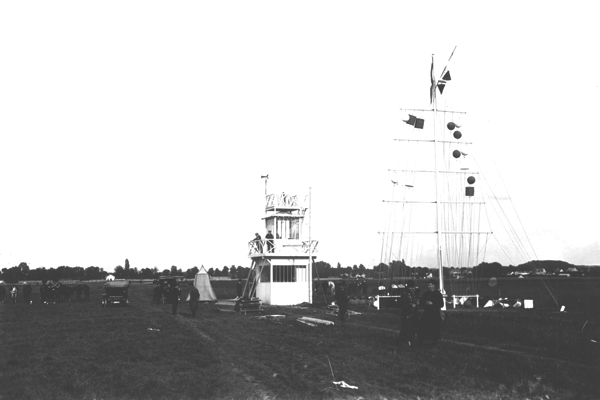 The tower and mast to Port Aviation signals, are the ancestors of the control tower.(photo via Pierre Untereiner of port-aviation.com, used with permission)
On 23 May 1909, the inauguration of what was now called "Port Aviation" took place. Around 6PM Mr. Delagrange flew in front of an excited crowd who had spent 4 hours in waiting, and he is raised in triumph after his flight is accomplished. On July 4, 1909, an air festival is organized for the benefit of charities. It brings together 10,000 people. Blériot took the opportunity to test his fuel endurance, flying the aircraft with which he planned to cross the English channel a few days later.
In October more than 100,000 Parisian spectators gather at the airfield on one single day. These "fan's" of the still fledgling aviation mainly arrive by rail, as Port Aviation was then served by the station of Juvisy sur Orge, located less than one kilometre from the main entrance.
18 October 1909 is a major date in the history of Port Aviation. Without telling anyone in advance, the Count de Lambert makes his first flight over Paris.  After leaving Port Aviation, he followed the course of the Seine and by passed the Eiffel Tower under the watchful eyes of many Parisian walkers, returning to land 50 minutes later at the place of departure. He coincidentally broke the record altitude during the flight.
During the year 1910 after the floods of January and February, ten flying schools were established.As a result , pilots from around the world come to France and Port Aviation for their pilot's licence until Januarui 1911. Subsequently, each country will issue its own licences under the aegis of the International Aeronautical Federation.
From 1911 to 1914, there is a particular activity on the aerodrome every weekend, much to the delight of the Parisians. They might attend airshows with or without acrobatics, skydiving experiences, but also horse and bike races or cross country racing. But the progress in the aviation industry is such that the field becomes increasingly cramped for new aircraft. Despite all their efforts, the organizers cannot prevent that, on the eve of the great war in August 1914, Port Aviation has become a grassy field on which
only a few cows are grazing. The facilities built by Guillaume Tronchet are without use.

Overview of the whole of the airfield around 1913 with the slopes of Savigny without a single House (wright-brothers.org).
Facilities in 1909 consisted of
-32 sheds-repair and construction
-forums
-1 reception VIP hotel
-1 restaurant and buffet
-1 main entrance with shops
-1 post, a central telephone and Telegraph
-1 room for journalists
-1 infirmary
-1 car park 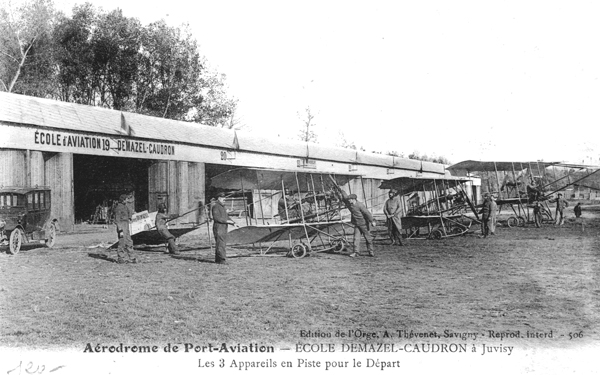 Demazel school with Caudron aircraft and the sky blue Farman (photo via Pierre Untereiner of port-aviation.com, used with permission)
However, the outbreak of the Great War gives them a second life.
-as a first step, a detachment of 40 soldiers is stationed here to guard the railway tracks to Juvisy station.
-in a second step and as early as the spring of 1915, a detachment of the British Flying Corps is based herewith a dozen machines.
The major nations of the belligerent countries had been quick to figure out that aircraft could be used as new weapons of war. In the fall of 1915, the English were replaced by the French who set up a training centre. For two years, from 1915 to 1917, more than six hundred pilots were trained.
From 1916, the French army used four airfields located on the heights of the neighbouring villages, but distant enough from each other.
Every day staff was conveyed to Port Aviation from Savigny, Plessis le Compte and Paray Vieille Poste.
In 1917 the United States entered the war.  Curiously, the expeditionary corps did not bring an air arm, Only when it came in contact with the realities of war in Europe, they began to realize the need to own an air arm. To achieve this quickly, they had to accept Allied governments. The decision was taken to create a base where aircraft would be received, inspected, armed and subjected to flight tests,  before being sent to the fighting. That was how Americans settled on the edge of the road to Fontainebleauto, south of a village named Orly.
In less than 3 months, they installed all the necessary infrastructure: hangars, buildings, internal roads, technical facilities, water supply, electricity, phone, etc. This new airfield development at Orly meant that Port Aviation became obsolete, regardless of its role in the history of aviation.
From 1 January 1918, the Allied air forces training centres underwent a reorganization. The French are transferred to Etampes while the Belgians return operations in Viry Chatillon. But the size of the field becomes a disadvantage with the increasing power of the aircraft.

During the summer 1919, the owner of the land began to sell by plots. This is the beginning of the subdivision at Port Aviation. Between 1919 to 1927 the southern part of the field is sold and from 1927 to 1933 the northern part. In remembrance, the streets of the subdivision are each the name of a pioneer of aviation.
One of the buildings of the old airfield still exists. The flying field was in front of its large windows where the elite of the time (the rich and powerful) came to admire the prowess of the most famous aviators such as Roland Garros ( the first crossing Mediterranean sea), Louis Bleriot (first real flight of a engine plane in Europe) and the first female aviator in the world, french Elise Leontine Deroche, etc. 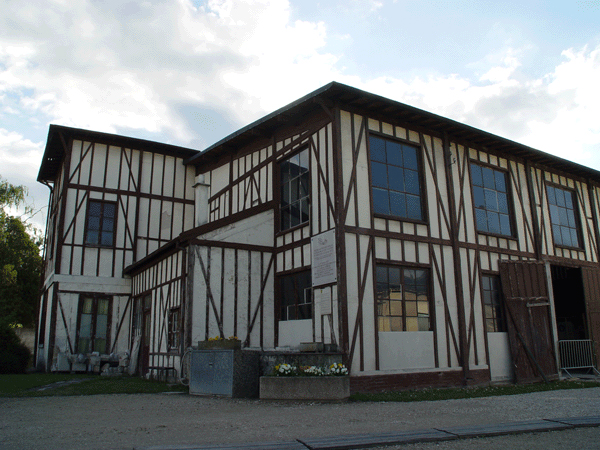