Reims-Champagne air base (french: Base aérienne 112 Reims-Champagne, ICAO LFSR) was a French Air Force base 125 kilometers northeast of Paris.
The airfield began as a humble airfield in August 1909, when the Great Aviation Week of Champagne (french: Grande Semaine d'Aviation de la Champagne) was held at the site, watched by a million spectators. The event sparked France's interest in military aircraft, resulting in a manufacturing contest that was to lead to contracts for France's first military aircraft. 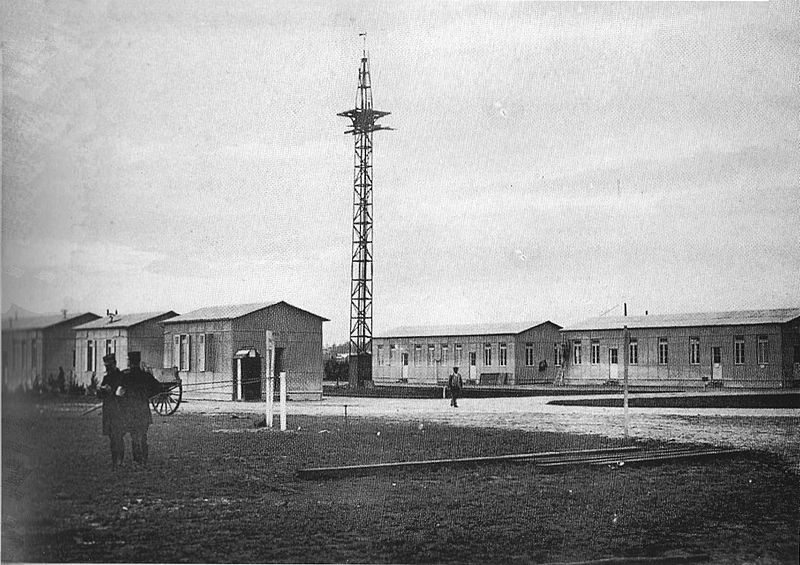 During World War I the airfield was home to balloon testing, gliders and the Escadrille des Cigognes, the Storks escadrille, operated from here until they were forced to evacuate when Reims fell in German hands.

After three years of work to rehabilitate the lands from the effects of World War I, the airfield officially entered service as Base Aerienne 112 (BA112) on 1 October 1928.  That day a Breguet 19 of the 12th day of the 12e régiment d'aviation de bombardement de jour (12th Day Bombing Aviation Regiment) landed at Reims from Lachen-Speyerdorf field in Germany.
In the 1930s the base expanded rapidly, becoming a test center and a tactical evaluation unit in 1933. The same year it saw the formation of the 4e Escadre de Chasse (4 Fighter Wing), which in turn lend 2 squadrons to form the 5e Escadre de Chasse. Throughout the 1930s, Reims served as a showcase for the French Air Force, receiving prominent personalities such as the commander of the Polish army, the German undersecretary for Aeronautics and the Chief of Staff of the Royal Air Force.
By 1939, Reims was easily the largest installation of the French Air Force, with some threehundred aircraft on strength. Amongst these were Bloch MB210 bombers and 100 Curtiss H-75 fighters, delivered from the US in March 1939. All these aircraft dispersed over France when at the end of August the Royal Air Force began stationing Fairy Battles of the Advanced Striking Force at Reims. The Phoney War had begun.

A Hawker Hurricane Mark I flown by Flight Lieutenant J E "Ian" Scoular, commander of 'B' Flight, No. 73 Squadron RAF, being refuelled and re-armed between sorties at Reims-Champagne (IWM).

In mid-June 1940, the base was occupied by German invaders. They used the airfield as a major depot for Junkers aircraft, seeing both Ju88 bombers and Ju52/3m transports. As a result, the airfield became a frequent target for Allied bombers from 1943 onwards. The Allied recaptured the airfield in August 1944 and after repairs had been made on 3 September 1944, they immediately turned the airfield -now named A-62 Reims/Champagne- into a fuel depot. For 5 days and nights, 200 Douglas C-47s ferried jerrycans of fuel to the front line from Cherbourg Querqueville airfield. In February 1945 Reims became the primary Headquarters for General Eisenhouwer, Commander of Allied Forces in Europe. On 6 May 1945, General Jodel arrived at Reims airfield to sign the unconditional surrender of the Third Reich on 7 May 1945 at 2:41 AM. The airfield then continued to be used as a bridgehead to repatriate thousands of deportees and prisoners of war. It then served as a storage site to millitary surplus, was handed over to France and sold off.

By the end of the 1940s, the decision was already made to reactivate the base and fit it out with jet aircraft. The 3e Escadre de Chasse served the base from 1950 until 1951, flying the DeHavilland Vampire (1950), Republic F-84 Thunderjet (1951) and North American F-100 Super Sabre (1959). In 1961, the Wing was replaced by the 30e Escadre de Chasse de tous temps (All Weather Fighter Wing) flying the SNCASO 4050 Vautour IIN fighter-bomber.
On 14 February 1953, the base was officially christened "Commandant Edmond Marin la Meslée".
The famous 2/30 'Normandie/Niemen' fighter squadron moved to Reims in June 1966 to be joined with 3/33 'Lorraine' all weather fighter squadron. Between 1961 and 1978 the base was host to the 62 e escadre de transport  flying Nord 2501 Noratlases. In 1973, the first Mirage F1 arrived at the base, and throughout the 1970s, at the height of the Cold War, the base held frequent squadron rotations with the Soviet Air Force.

General Eisenhower arrives at the base for the celebrations for the arrival of the Thunderjet in France under the Military Assistance Program (G.Garitan, under CC BY-SA 3.0) 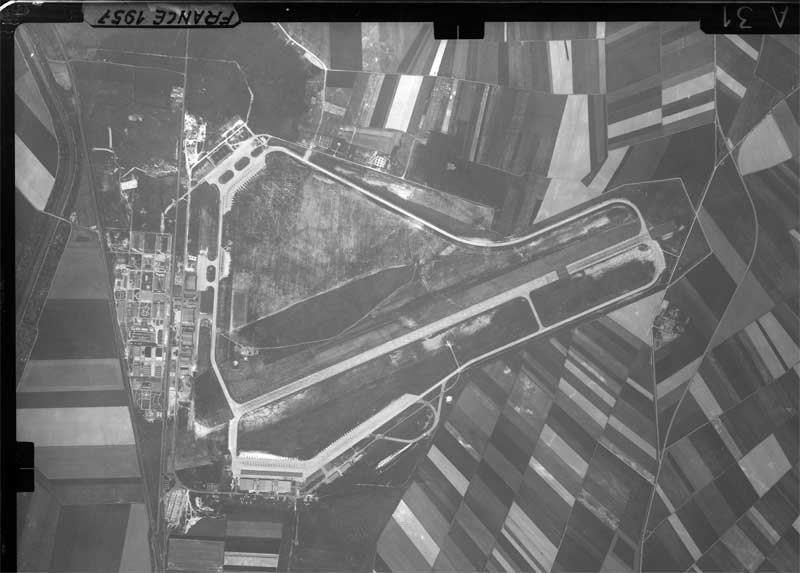 The early 1990s saw Normandie-Niemen depart for Colmar-Meyenheim and the dissolution of the 30e Escadre de Chasse in 1994. Reims became host to 01/33 'Belfort' and 02/33 'Savoie' with Mirage F1CRs from BA124 Strasbourg, while resident 3/30 'Lorraine' was renumbered to 3/33 'Lorraine'. With 60 aircraft on strength, the base was by now one of the largest in France. On September 1996, the base received Pope John-Paul II who held a mass at the base for 200,000 people.

In 2005, 'Lorraine' was leaving Reims to join Colmar-Meyenheim. Prime Minister François Fillon and Minister of Defense Hervé Morin announced the closure of the base in July 2008, to take place in 2011/2012. the closing ceremony was held on 30 June 2011, when the final two Mirage F1CRs of 2/33 'Savoie' officially left the base for BA118 Mont-de-Marsan. A third Mirage, that had been left behind with a brake problem, unceremonially left the base on 20 July 2011.
BA112 was not just responsible for the airfield at Reims. In addition, it had also been responsible for the former NATO airfields at Vouziers-Séchault, Montmédy-Marville and Marigny.

In 2012, the base was used as a venue for the annual 'Teknival', a major dance music event. It is otherwise abandoned. 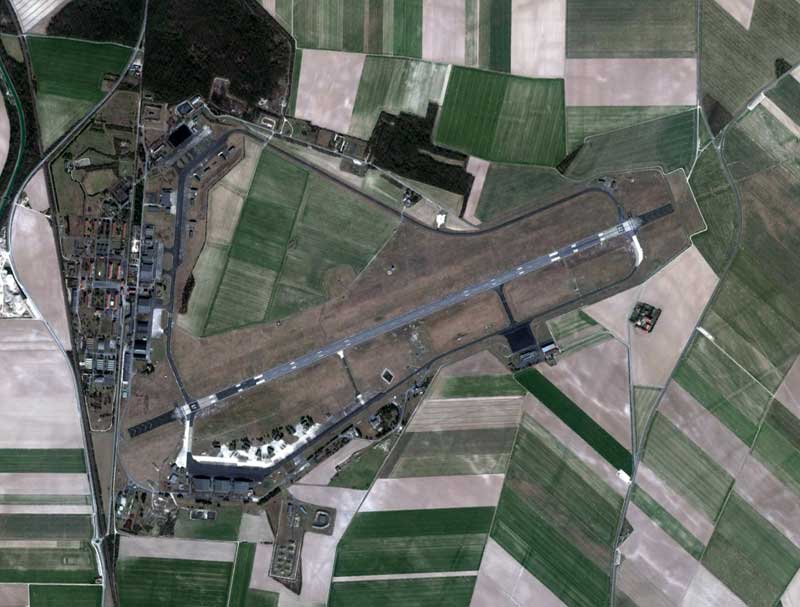 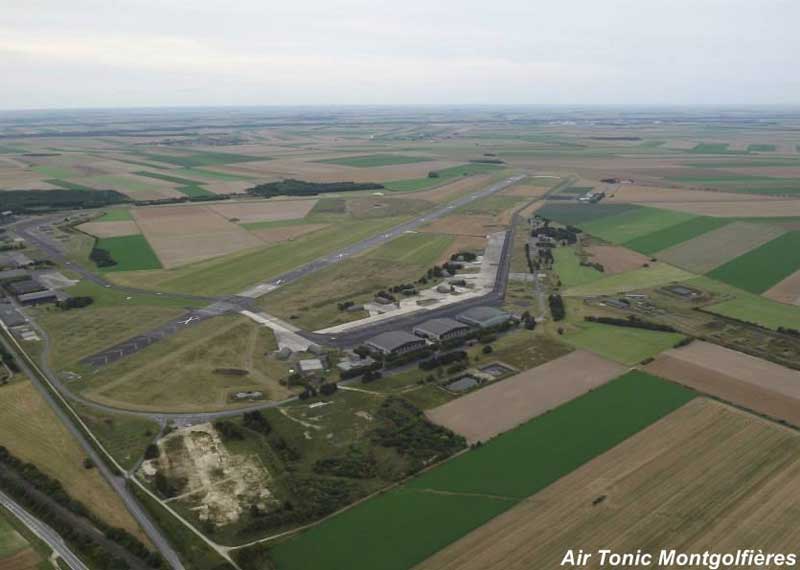 Reims-Champagne photographed from the air by Jean-Luc Jolly of air-tonic.com. Large X's on the runway can easily be seen.