Sint Denijs-Westrem airfield (dutch: vliegveld St. Denijs-Westrem, ICAO: EBGT) was located to the soutwest of Ghent (Dutch: Gent).
It was built in 1917 during the German occupation of Belgium during World War I. They named it Armee Flugpark IV (English: Army Air Base #4). The airfield was base to two squadrons (Staffel 13 and 14) of Kampfgeschwader der Obersten Heeresleitung 3 (KAGOHL 3) flying Gotha IV Bombers. Their mission was to bomb London.

The original IWM capture says "Aerial View of Gontrode Aerodrome", although this is clearly St. Denijs. Photo taken during World War I, the North is to the left of the photo (© IWM (Q 12274)).

In 1940 the airfield was briefly used for the Flying School that had been brought here from Wevelgem. During the occupation the Germans enlarged the airfield considerably, and converted it into a fighter base. It also received a repair depot for the fighters of JG26 at Wevelgem, Moorsele en Rijsel (French: Lille). The airfield did not become an offensive base, but was instead used by liaison aircraft in support of the Luftwaffe headquarters at the Palace Hotel in Ghent.
Somewhere during the second half of the war poles were driven into the field to hinder alllied airborne landings. After being liberated in 1944 it was pressed into British service as airfield B-61, who converted it into a major forward operating base. On 11 October 1944 3 Polish squadrons of 131Wing of the RAF landed their Spitfire-IXs at the field. Because of the proximity of the airfield to a hospital many USAAF bombers used the airfield as an intermediate to bring wounded airmen in for medical treatment.
On New Years Day 1945 the Luftwaffe managed to launch a massive attack with Focke Wulf aircraft on the airfield and countless aircraft were destroyed on the ground. Near the end of the raid the Polish fighters that had been flying over the Netherlands during the attack returned just as the Germans were to fly home, and a massive aerial battle enssued in the skies over Ghent, despite both sides being short on fuel. In total 32 Polish and 21 German aircraft were lost in the battle, which killed 11 Germans, two Polish, one Canadian and 3 ground support crew. 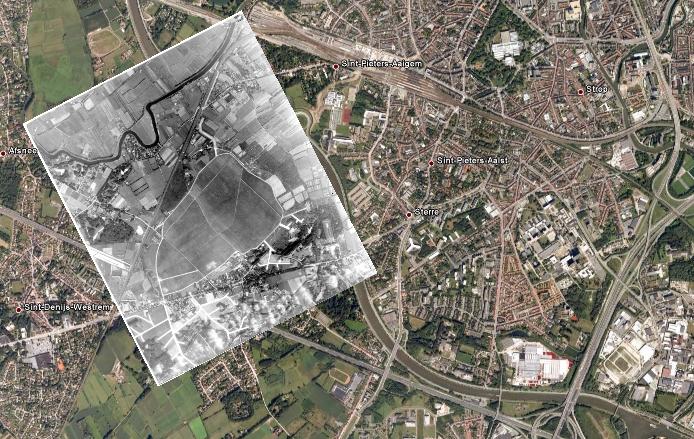 St.Denijs-Westrem on an allied reconnaissance photo in 1944

In 1946 the military handed over control to civilian authorities, and the airfield became the official airport of Ghent. The airport shrank considerably with the construction of the E40 motorway to the south in 1954, and again when the Ring canal on the north side of the airport was completed in 1969.
The airport was closed in 1985 to make room for the Flanders Expo.Today nothing remains of the former airfield.
Local citizens and businesses adopted the name Poolse Winglaan (English: Polish Wing Lane) for one of the local streets however, a name that became official on 27 september 2010. A monument to commemorate the Polish airmen was erected in 1974.
Two great sites about the airfield, containing many graphs and photos can be found here and here 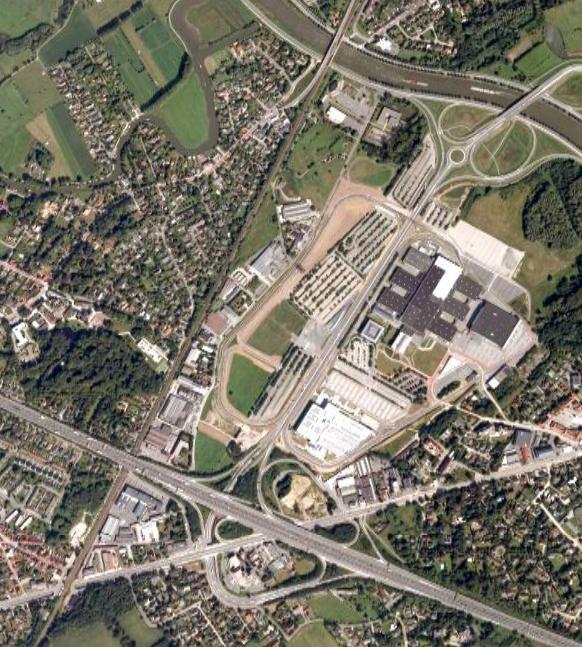 The former site of St. Denijs-Westrem airfield in 2008 (Google Earth).