RAF Spadeadam never was an airfield. It is listed here because it has a history which is directly related to the British Air Ministry and British aviation industry.
Until 1956 the area had no activity at all and was simply referred to as the Spadeadam Waste. That changed in 1957 when the Intermediate Range Ballistic Missile Test Centre was built for the Blue Streak Project. The Blue Streak missile was a British medium range ballistic missile, designed in 1955 and the first example was built in 1957. It was built and tested by a Rolls-Royce led consortium, which also included deHavilland and British-Oxygen. This machine obviously needed testing and this is why in 1957 the Intermediate Range Ballistic Missile Test Facility was built on 9000 acres of the wilderness of Spadeadam. The vast test site had large engineering workshops, resevoirs, pump-houses, kilometers of piping, control bunkers, even a movie and photographic department. The most prominent structures were the static test-beds, enormous concrete platforms with long spilways to direct the engine exhausts during test-firing.There were facilities for testing the engines alone and for the static testing of complete vehicles. During testing (which could be heard tens of kilometers from the site) millions of gallons of water from the river Irthing were pumped into the spilways to cool the rocket engine exhaust. The steam cloud this generated resulted in micro-climates over the wasteland. 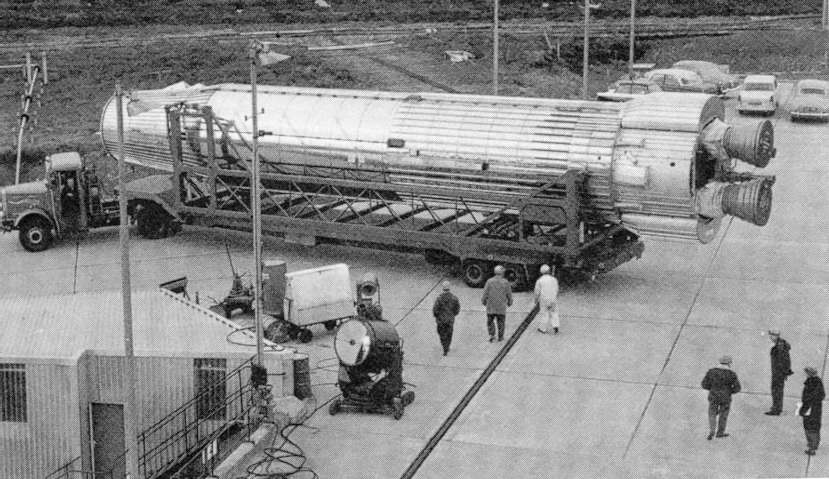 People and vehicles giving scale to the size of the missile at Spadeadam (SpaceUK.org). 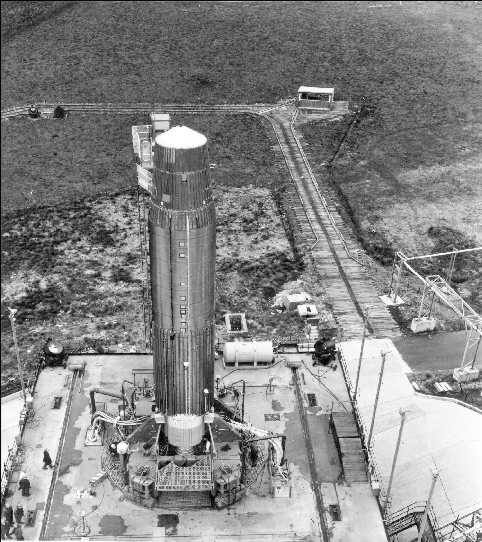 A non-flight test model on one of the Spadeadam test stands (SpaceUK.org).

Blue Streak was cancelled by the British government in April 1960. Harold MacMillan's government was keen to find support in Europe and co-operation in the European Launcher Development Organization (ELDO) was one way to achieve this. It also helped to obscure the fact that millions of pounds had been spent on an ultimately defunct weapon. Blue Streak was to be converted into the first stage of a satellite launch vehicle called Europa. It was intended to challenge the Russian and American launch monopolies in the 'Space Race'.
While stand-alone testing of the engines at the four stands at Priorlancy Rigg was halted, the vehicle static firing stands at Graymare Hills continued to operate. In the early days of the uneasy alliance that would become ELDO, it was by no means sure that the launch site in Australia would remain available. Therefore, serious condsideration was given to Spadeadam as a potential alternative.
Phase One of the Europa development program involved only the first stage and consisted of three vehicles (F-1, F-2 and F-3). They were successfully ground tested at Spadeadam prior to shipment to Australia. The test flight in Australia on 5 June 1964 was successful, but the political climate was changing. The Labour Party, and new Prime Minister Wilson in particular, had been vocal opponents of both the original missile delivery system and latterly the participation in ELDO. Over the next few years development of the launch vehicle continued, with static testing at Spadeadam followed by shipment to Australia for live firing at Woomera.

An Europa rocket on the test pad at Spadeadam (ReoCities.com).

Throughout this time Britain remained as an unenthusiastic member of ELDO, bound more by international treaty than scientific zeal. At the same time the French were constructing a rocket launching facility at Kourou in French Guyana only 500Km north of the Equator. That location would be much better suited to achieve geosynchronous orbit. While the French won in influence, the Australians left the project in 1970 and Britain followed in 1972. The consortium left the facility and all work on rockets at Spadeadam ended after only 15 years. The entire site was handed over to the Proof and Experimental Establishment for static firing and range activities.
In 1976 the Royal Air Force took over the site and Spadeadam became the largest RAF Station in the country when in 1977 the first Electronic Warfare Tactics Range was created. It has remained in use as such ever since, featuring targets on the range such as Russian SAM systems and even a fake airfield; Colinski airfield with real aircraft parked on it: former Belgian AF T-33s, former Adl'A Mystère IV-As and a former East German Su-22. 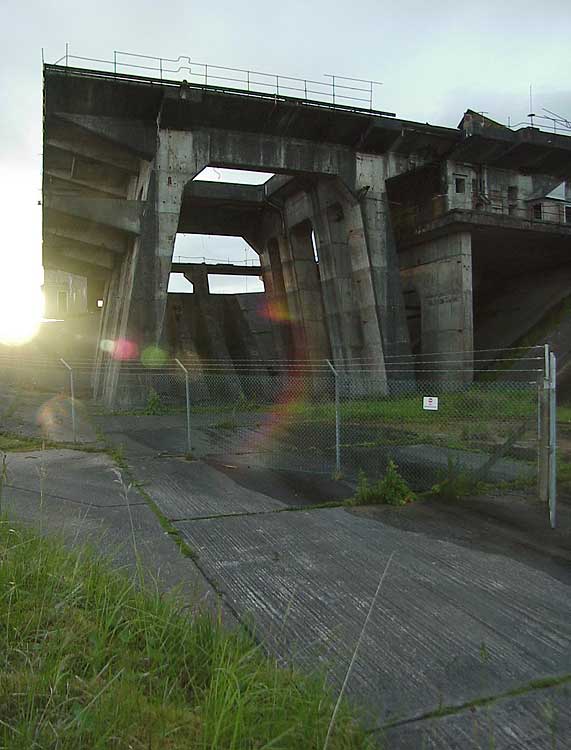 One of the engine test stands, which still exist at Spadeadam (bunkertours.co.uk).

The site's role in Britain's Cold War nuclear weapons programme was made public in 2004. Although the development of Blue Straek at Spadeadam had been unclassified, not all details were known.
In 2004 tree-felling uncovered remains of abandoned excavations for a missile silo. A survey of the site by the RAF and English Heritage has attempted to record and interpret what was previously so secret that almost no plans from the period exist.
Spadeadam was chosen as a launch site because of its isolation, combined with nearby infrastructure capable of supporting it, such as a plentiful water supply, access to the National Grid and road connections. Spadeadam seems to have been intended to be one of 60 launch sites along the east coast of England. These were never built and this one was only to be used as a test facility for engine firings and testing electronics and ground installations. While construction did take place, it was never completed. It was located not too far from the engine test stands.
An extensive article on the silo and Blue Streak can be read on SpaceUK.org. 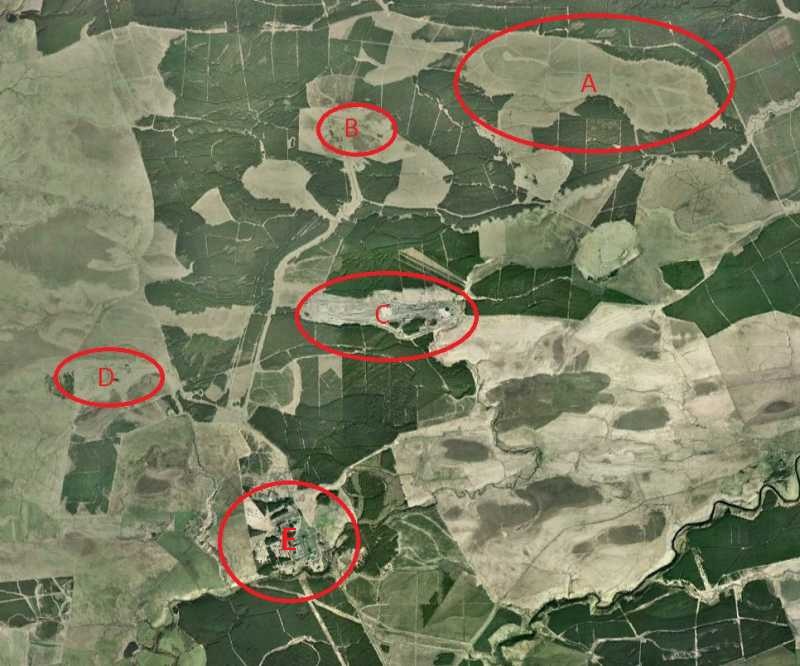