Air Base Brustem/St.Truiden (Dutch: vliegveld Brustem/St.Truiden, also known as Air Base St.Trond and ALG A-92 St.Trond, ICAO: EBST) was a military airfield operated by the Belgian Air Force
During World War II Brustem was the base of one of the most famous Luftwaffe Night Fighter squadron, NJG1, with units II/NJG1 and IV/NJG1 operating Junkers Ju88 and Heinkel He219 aircraft from here in 1944. Its most highest scoring German night fighter pilot, Heinz-Wolfgang Schnaufer (121 air victories, most of them on night) was referred to as "the Ghost of St. Trond" by British Bomber crews that flew over Germany on night attacks raids.
After the war, the population of the area told a story about the Spook Pilot of Brustem, a story that supposedly really happened. The story (as told in a war time poem (in Dutch) tells of an Allied pilot that wreaked havoc at Brustum. In a PS at the end of the poem lies the clue: In reality the Spook was not one, but two pilots, actually twin pilots from Poland, both flying with the RAF. The first Spook died in action near Osnabruck, wearing his brothers RAF watch. The second Spook was killed by the suicide attack of a Luftwaffe ace who wearing the first Spooks watch, over Air Base Brustem. 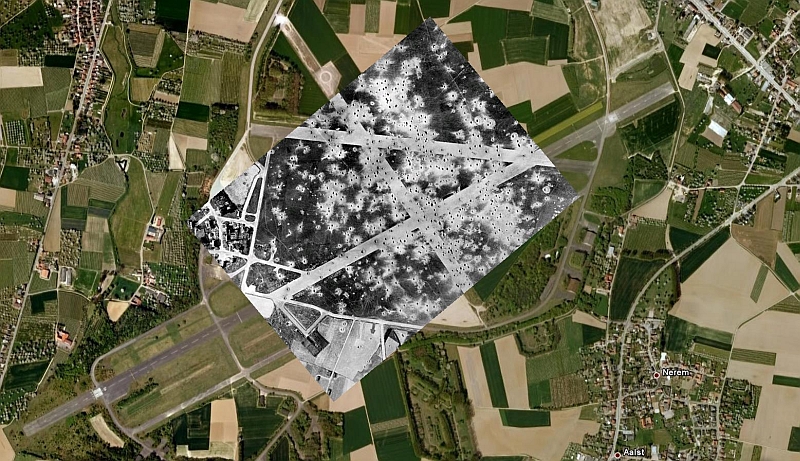 On 15 August 1944 the airfield was bombed by a bomber strike force of 1000 bombers that was to deal with 6 air bases in the Low Countries (gearthhacks.com). 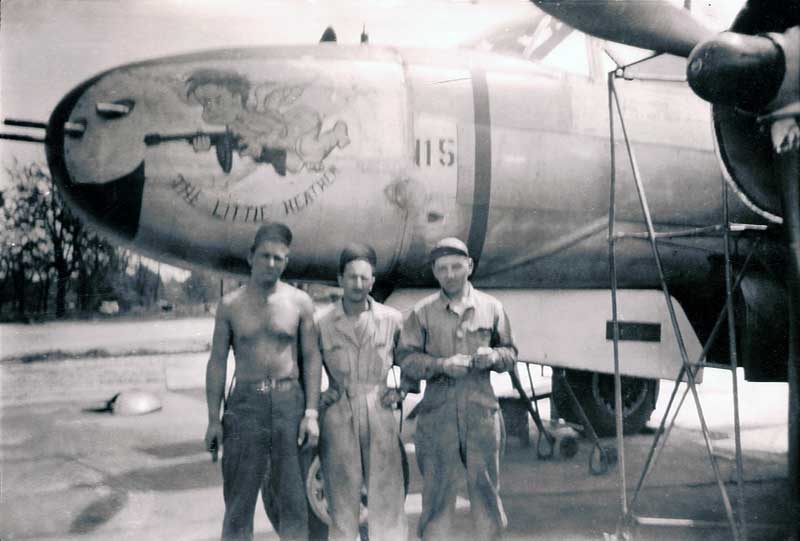 Groundcrew and a A-26 Invader "The Little Heathen" at St.Trond (photo Albert Bamps, kindly provided by his son Jos Bamps) 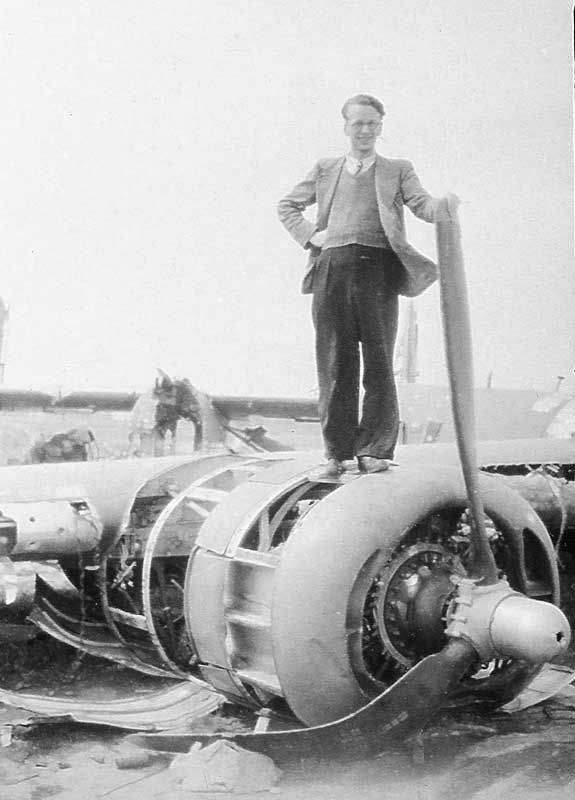 Jos Bamps provided me with this photo of his father Albert standing on the wreckage of B-24 41-129128 "Lady Luck". In October 1944 "Lady Luck" diverted to St. Trond on two engines after sustaining battle damage by flak over Cologne.

During the Cold War the airfield was home to the Flying School of the Belgian Air Force.
St.Truiden is now used by local companies only, as operation as a recreational or general aviation field is very strictly regulated. The former military Air Base Brustem is now known as Limburg Regional Airport (LRA). LRA was founded when the Belgian military closed Brustum Air Base in 1996. LRA was closed by local and provincial authorities in 2004 when it was found it did not have a minimum of safety standards adhered to. Because of noise constraints the facility now has a much shortened (complared to it's military days) runway, and is only open to local aviation related businesses.
According to this website (in Dutch) Brustem and it's associate Goetsenhoven AB are now, less than 15 years after the military left) in a major state of disrepair. The website includes a lot of pictures of Goetsenhoven and Brustem.
In May 2013 I paid the northern half of the airfield a visit. The north side of the airfield was largely built over as a commercial zone, with the taxi track in use as a (very wide) local road. A hangar (now privately owned) can be found on the northeast side. The former 14/32 runway still exists, but in a severely deteriorated condition with a lot of debris on it. 09/27 still exists, in a reasonable condition, but only as a taxitrack. Just south of the 09 runway head a large hangar still exists. Strangely enough, although the millitary left in the 1990s, large portions (generally speaking: every bit of land off the nothern taxi track) are still military domain. Local police informed me that Military Police still patrol the area, arrest trespassing photographers and confiscate their equipment. While I have my thoughts about that statement, the message was clear: please leave, and so I did. 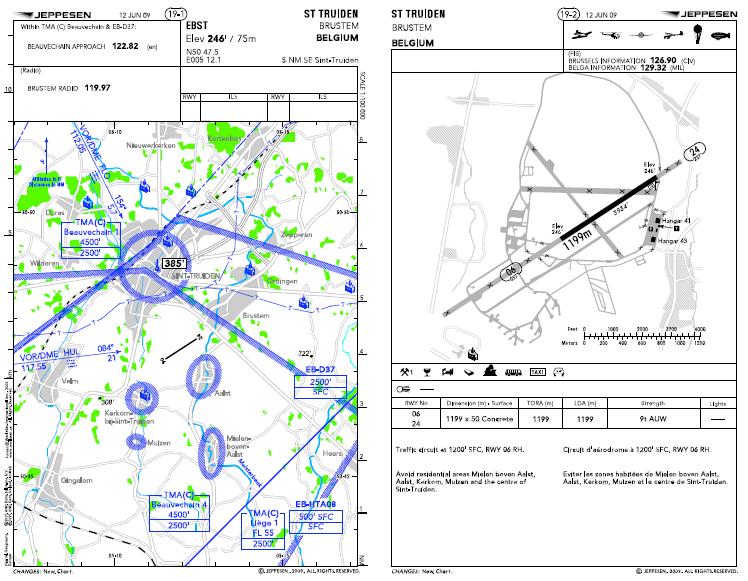 Jeppesen Aeronautical map showing the runway and taxiway system of Brustem/St.Truiden in 2009. 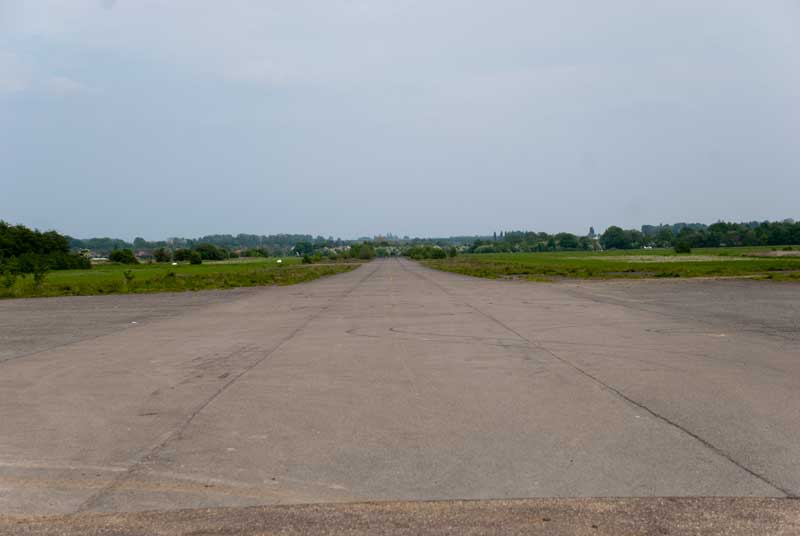 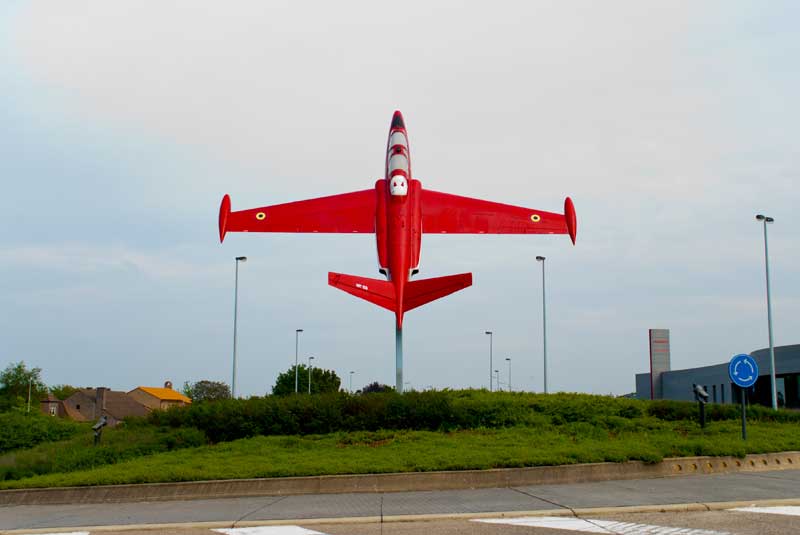 Fouga MT-03 of the Red Devils aerobatic team on a pole near the entrance of the new commercial zone on the north side of Limburg Regional Airport, 2013 (RonaldV).