Air field Ta Lambert (also known as Xewkija airfield) was an airfield on the island of Gozo in Malta.
The airfield was built when the Allies needed more runways and parking area in preparation for the invasion of Sicily in 1943. Nobody really knows why up to that time the island of Gozo had not had any airfields, while there were 7 on the (larger) island of Malta. The United States mililtary looked into the possibilities, and kindly asked the bishop of Gozo (Mgr Gonzi) for permission to build one.
They chose the Ta Lambert site.  21 Engineer Aviation Regiment built the airfield, under the supervision of Captain Robert E. Sexton, clearing the terrain in 6 days. Between the 8th, and 20th June 1943, in one and a half weeks, two runways had been prepared. 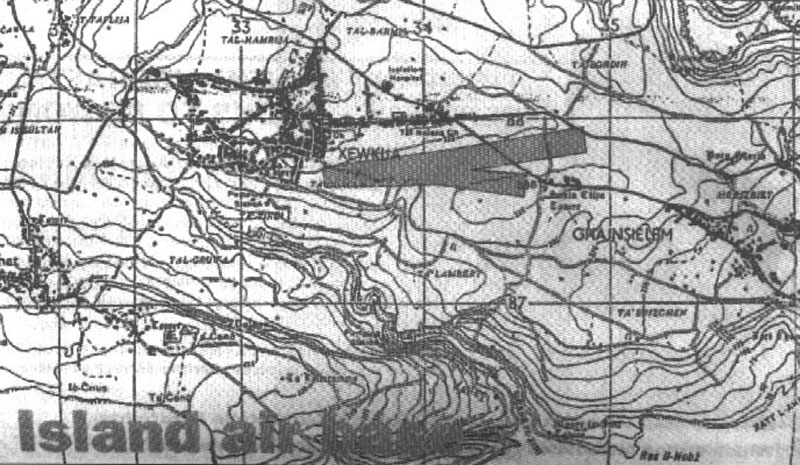 It is not known how many aircraft used the airfield, but a local source claims there were hundreds. Ta Lambert airfield was used by USAAF's 31 Fighter Group flying the Spitfire Vc, and consisting of 307, 308 and 309 Fighter Squadrons under Colonel Fred M. Dean. They arrived at Xewkija Aerodrome, Gozo, from Tunisia on 30 June 1943.

The full strength of the Spitfire provided its most able contribution on 10 of July, the day of the Sicilian invasion. Xewkija airfield served as a launch pad for the USAAF fighters and also as an emergency landing strip. In five days the allies gained a good foothold on the Sicilian soil and soon afterwards the US contingent in Gozo moved to liberated airfields in Sicily and Southern Italy. Following that and only briefly, the airfield served as a staging post for Piper Cub L-4s crossing from North Africa to Sicily. By August, after only six weeks of intensive use, the airfield had fallen into disuse and closed down. A total of 4 USAAF pilots had failed to return while on a mission from Xewkija. Around June 1944 it was restored to its original fertile land and handed back to its original owners.

One of the landing strips has been obliterated by the road from Mgarr to Victoria but the other one is still there. It is overgrown with rubble and odd bits of machinery but not used either for agriculture or horticultural uses.
The terrain is still owned by the Maltese government.