Tain air field (RAF Tain, also known as RNAS Tain) was an airfield in the North of Scotland.
Although the airfield was built in 1940 and opened in 1941, its aviation history goes back further than that. RAF Tain had already been in use as an aircraft weapons range since the Interbellum. During that time it was used by both the RAF and Fleet Air Arm (FAA). The actual Tain airfield was developed from a Landing Ground that existed at the weapons range before the war. The resulting RAF Tain consisted of three runways, measuring between 4350 and 6000ft, and several types of hangars.
The airfield opened as a Fighter Sector Station on 16 September 1941, with 17 Sqn (Hurricanes) assigned. Between October 1941 and March 1942 123 Sqn was stationed at the base. They were followed by the FAAs 801 Sqn (Sea Hurricanes).
Together with RAF Lossiemouth it was designated as a bomber base to attack the battleship Tirpitz in Norway. For this reason 76 Sqn (Halifaxes) was stationed at the base in March and April of 1942.

unfortunately no photos of its wartime use have been located

In October 1942 the USAAF came to the base to prepare it for use as an advanced Strike Base. For this purpose its runway was lengthened. In 1943 the airfield served as No 1 Torpedo Refresher School (later renamed to Torpedo Training Unit) training RAF and FAA airmen.
In February 1943 the airbase was transferred to Coastal Command, during which time many units used the airfield, but no units were assigned.
In May 1944 the airfields NE-SW runway was lenghtened to allow 86 Sqn Liberator bombers to operate from the airfield. Only a month later the 66Sqn Liberators succeeded in their first kill of a submarine. From August 1944 until June 1945 they were joined by 311 Sqn (Liberators).
In 1945 the airfield was still operational, but the weapons range had been brought back to service.

In 1951 RAF Tain was completely brought back to its original role of weapons range.
Over time it has become one of the busiest ranges in the UK, serving aircraft from the RAF, USAF and other NATO members. 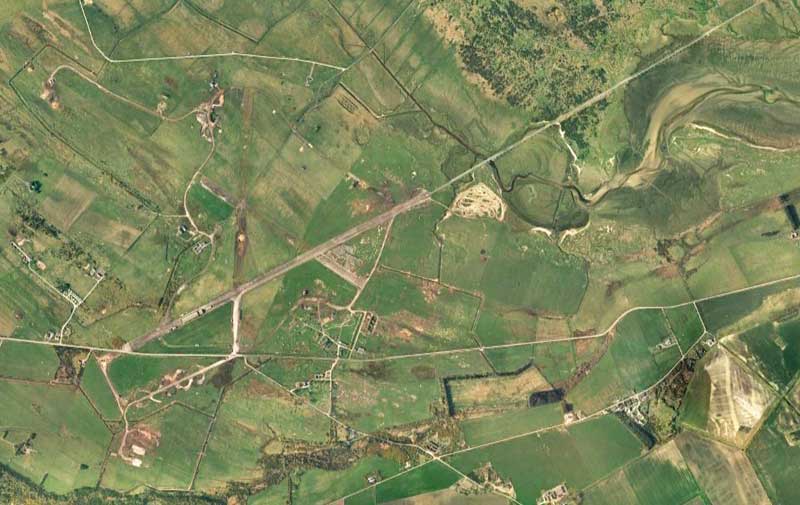 Former Tain airfield in late 2005, with a road extending from the main runway all the way to the North Sea beach (Google Earth)

In 2006 the RAF began demolishing the World War II era buildings at the airbase. In a tribute to the airfield two Hercules carried out a fly-by as the first building was demolished. 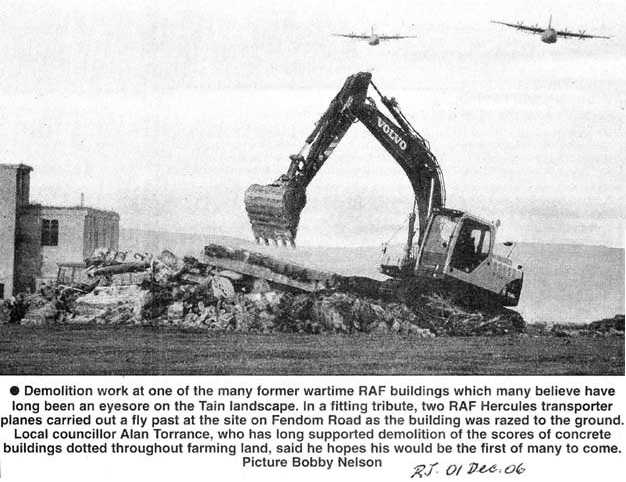 Newspaper article showing the fly-by over Tain airfield by two RAF C-130J Hercules during the demolition of the first WWII-era buildings (Ross-shire Journal via ControlTowers.co.uk). 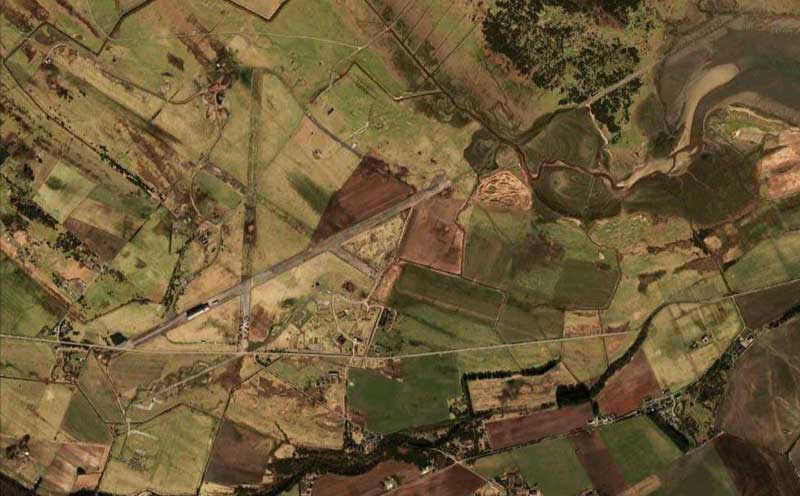 location of the former airfield in 2010, the road to the beach had been removed sometime before (Google Earth)