Ilsvika seaplane station (norwegian: sjøflyhavna Ilsvika, German: Seeflugstützpunkt Drontheim-See) was an airfield 395 kilometers north of Oslo.
The airfield was built by the Luftwaffe during the occupation fo Norway.
It served Ku.Fl.Gr (Kustenfliegergruppen or Coastal Flying Groups) 406 and 506, operating BV138, He115 and Ar96.
It was also frequently visited by the BV222, the largest German flying boat.
Trondheim was one of the largest Seefliegerhorsten.

a BV138 pulled dry at Ilsvika 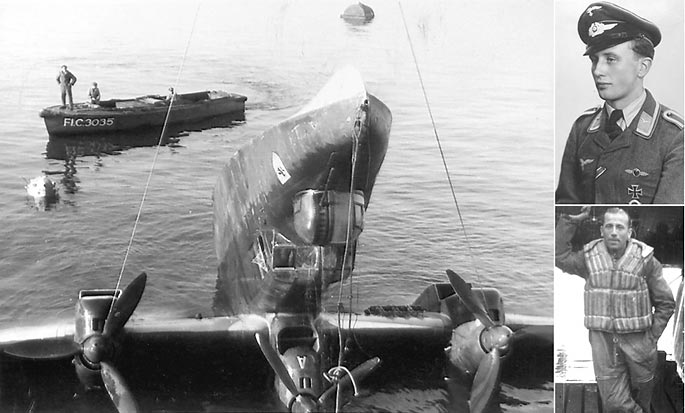 This Blohm&Voss Bv138C-1 of 2.Staffel KüstenFlieger Gruppe 406 (K6+AK, WerkeNr.0310158) capsized during
landing at 'Drontheim-See', Ilsvika in Trondheim harbour, on 13 June 1943. The aircraft started to sink and the crew
had to swim under water to get out. Oberfeldwebel Ernst Neumann drowned inside the aircraft. He was found the
day after when they raised the aircraft (ktsorens.tihlde.org).

Luftwaffe seaplanes in the Trondheimsfjord near Ilsvika during World War II (Municipal Archives of Trondheim on Flickr). 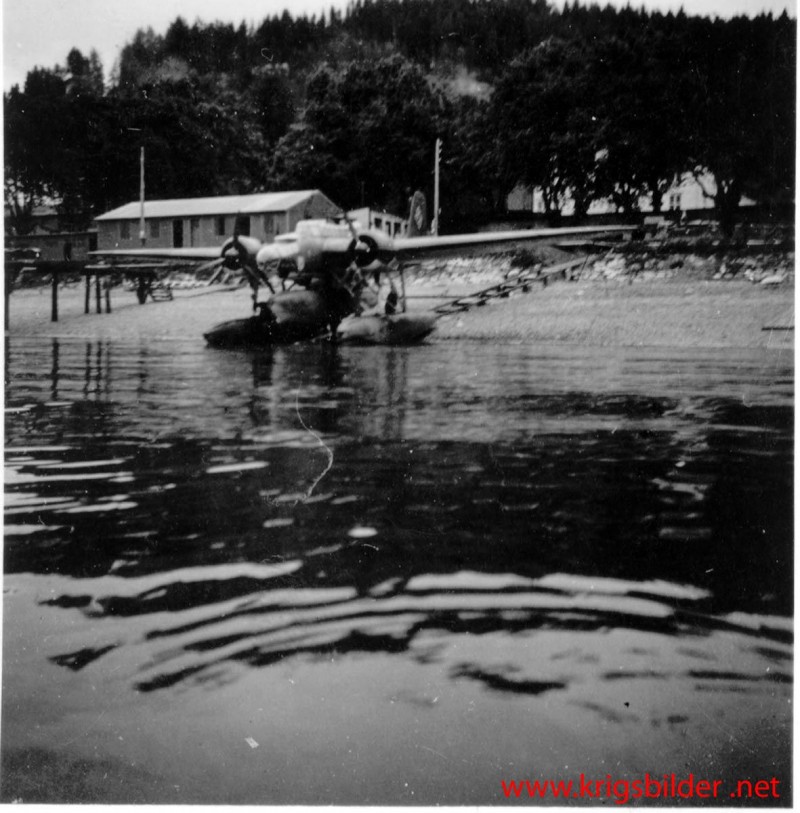 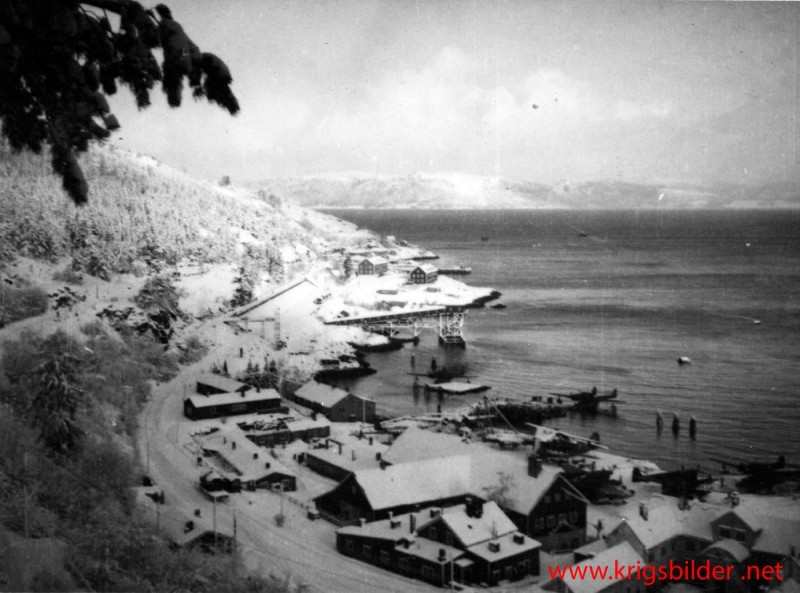 Overview of Ilsvika air station, with two BV138s in the water and several other aircraft on the dock (krigsbilder.net).


After May 1945 Trondheim-Ilsvika briefly served as a collection point for Luftwaffe seaplanes from all over Norway.
Two examples of the BV222 were collected here.
One was flown to England for evaluation, the other one was weighed down with spare parts and sunk in Trondheimsfjord.
It still remains there, along with other flyingboats, preserved by the lack of oxygen in the water at 60-70 meters of depth. 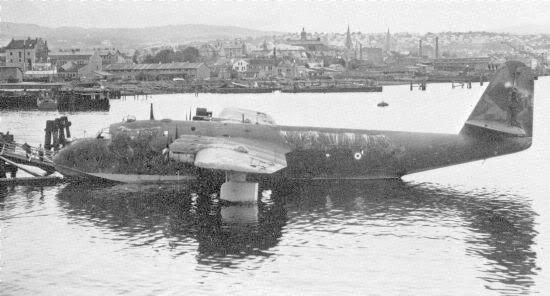 BV222 V-2 (X4+BH) in Trondheim after the armistice when she received British roundels for a ferryflight to England (warbirdsforum.com). 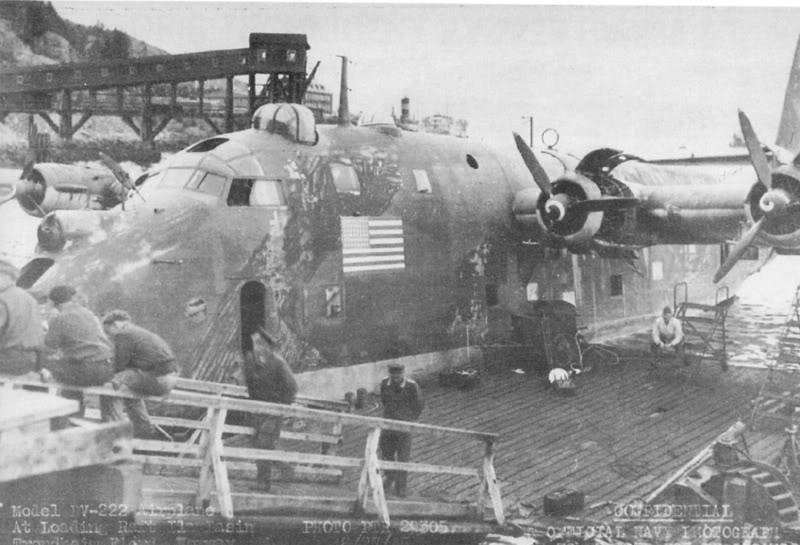 BV222 V-2 (X4+BH) had not left Trondheim when she received an American flag on the fuselage in 1946. Still,
the aircraft never left Trondheim. She was loaded with spare parts to make her heavy, and then scuttled in
Trondheimsfjord, where she remains under water to this day (ARC forums).

Most of the site was still intact in 2003.
That year, discussions began on redeveloping the site.
Aerial photography from 2009 showed no change on the site however. 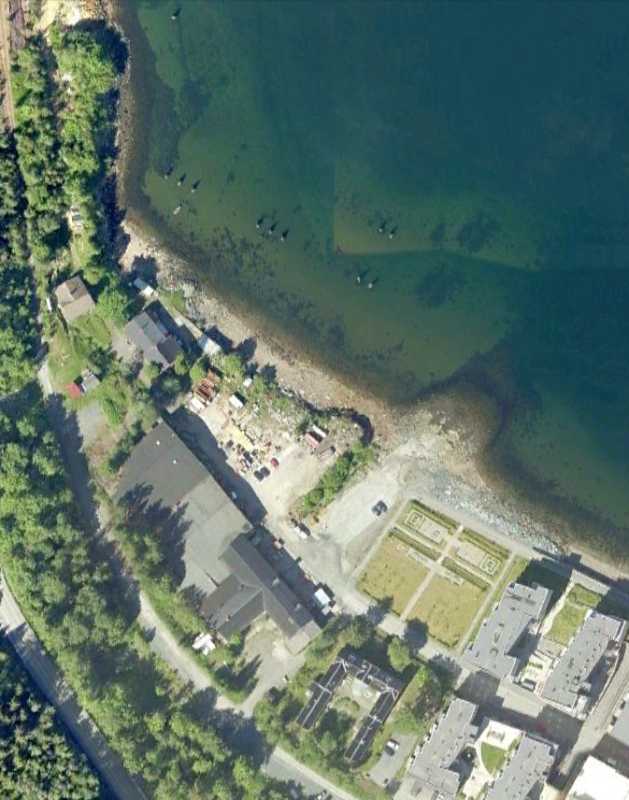 Overview of the former seaplane base in 2008 (Google Earth)