Enschede Airport Twente (Dutch: vliegveld Twenthe, also known as vliegbasis Twenthe or Twenthe Air Base, ICAO: EHTW) is a former RNLAF Air Base located north of Enschede, a municipality in the Twente region in Overijssel.

Opened on 29 August 1931 as Airport Twente (Dutch: "Vliegveld Twente"), the airport had a daily KLM service to Amsterdam from 1932 until the mobilisation of 1939. Just before the outbreak of World War-II in the Netherlands the Government ordered the fields to be ploughed, so it would be of no use in case of an invasion. 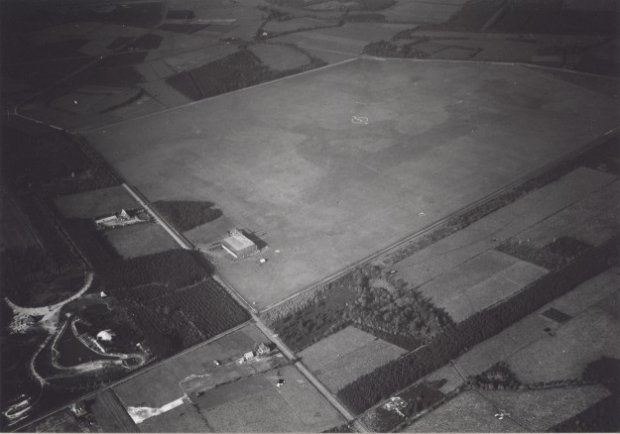 When the Germans finally invaded Holland in May 1940, all buildings were blown up by the military. German occupied the field and turned it into a Fliegerhorst, greatly expanding the airport in the process. The Germans also built a third runway (16/34 - 2000meter - brick) but after the war it was converted into a taxiway which is commonly known as the German Track (Dutch: Duitse Baan). At the end of the war the badly damaged airfield was captured by the British army. The British designated the airfield B-106 Twente and yet later RAF Twente.

Royal Air Force: 2nd Tactical Air Force, 1943-1945 © IWM (CL 2423). Oblique aerial photograph of the airfield at B-106/Twente, three days after being captured by Allied forces, showing the bomb-damaged intersection of the main runways as a result of Allied air attacks. Despite the damage, Supermarine Spitfires of No. 125 Wing occupied the airfield on 7 April 1945 and became fully operational, flying off the grass strip.

When the British transferred authority back to the Dutch Government, a notary accidentally added the letter H to the name of Twente (probably confused by the name of the province Drenthe) and the airfield was thus further known as Twenthe. Twenthe became the base for the Jet Flying School of the RNLAF which developed into 313Sqn, flying (R)T-33s. between 1956 and 1962 Twenthe was the base of three AWX squadrons operating the F-86K AWX fighter. The three AWX squadrons were represented in the station crest of the base by the three heads of the Hellhound. 313Sqn was disbanded in 1959, only to return in 1972 on the Northrop/Canadair NF-5A, a developed version of the F-5A. During the 1960s Twenthe operated the Fokker S14 Machtrainer.
Around this time, scheduled civilian air traffic is known to have taken place fom the airfield.
From December 1962, Twenthe was the home base for 306 Sqn and the conversion flight for Dutch F-104G Starfighter pilots. In 1967, 306Sqn hosted the Royal Flush photo reconnaissance exercise.

1967 map from the visitor booklet that was made by the base for visitors of the 1967 Royal Flush exercise. Back then, the base didn't have two, but three runways, the third being 16/34! 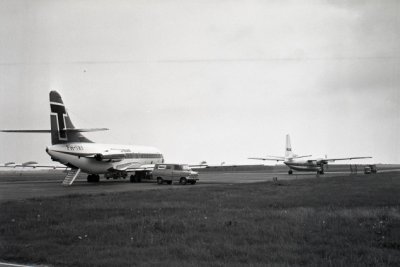 A Caravelle of Transavia and a Fokker F.27 of NLM at the civilian platform of Twenthe, ca. 1970 (Beeldbank NIMH).

Twenthe Air Base as depicted on a 1982 Soviet military map (high resolution version at atlassen.info)

In 1988 313Sqn and it's sister squadron 315Sqn converted to the F-16. 315Sqn was disbanded in 2004, and 313Sqn left Twenthe for Volkel Air Base the following year. Until June 2007 the Air Base was used for maintenance and repair of F-16s. In December of that same year, ownershi9p of the Air Base was transferred to the Treasury, ending 68 years of military presence.

In spite of the fact that Air Base Twenthe was already in the process of closing, Google was told by the Dutch MoD to censor the  imagery of the airfield in Google Earth and Google Maps in 2005 (Google Earth).


Currently there are no scheduled flights from the airport and no flights are allowed without prior permission. Up until the end of 2007, charter airline Transavia operated from the airport, but they have had to stop this service.  Some of the destinations served by charters from Twente were Las Palmas, Dalaman, Antalya, Mallorca, and Lourdes. In the past, KLM Cityhopper operated shuttle flights twice daily to Amsterdam Schiphol Airport.
At this moment only recreational activity takes place at Twente. The Twentsche Zweefvlieg Club (glider club) and the Twentsche Radio Modelvlieg Club (radio controlled model aircraft club) use the field. The Twentsche Zweefvlieg Club is the oldest, still existing, user at the airport, having used Twente as their homebase for over seventy years.

In November 2008 the Dutch government expressed their intention to keep the airport open and confirmed that negotiations were under way with possible operators of the airport.  In July 2009 the decision was made that Enschede would be turned into a compact civilian airport with a capacity of up to 1.2 million passengers per year. In December 2012 it was announced that attempts to sell the airfield had failed, so it still could not be reopened. A court decision that the airfield would loose its status as an airfield in November 2013 was overturned. The airfield reopened briefly for General Aviation in 2014, but it legally remained a military airfield until February 2017. Almost immediately after being turned into a civilian airfield, Dutch company AELS announced it was to fly an ex-Swiss Airbus A340 to the airfield to be demolished. At the end of that same year, an ex-KLM Boeing 747 (PH-BFR) was flown to Twente for demolition. In January 2018, it was announced that AELS had bought a second ex-KLM machine for demolition.