Air field Vaiņode (formerly known as Luftschiffhafen Wainoden, Kurland, and военный аэродром Вайноде, ICAO: EVFA) is an airfield in the southwest of Latvia, 150 kilometers from Riga.
The airfield, under command of I/ Armee-Korps Königsberg, was built by the Germans during World War I as a airship base with two 240 meter long airship hangars. The hangars were known as 'Walhalla' and 'Walther'. Airships stationed at the base were LZ58 (a.k.a. LZ88 or L25), LZ68 (a.k.a. LZ98), LZ 75 (a.k.a. L37), LZ84 (a.k.a. L38) and SL14. A major problem for the unit was obtaining hydrongen gas, which had to be brought to the airfield from other airfields by train. According to the Versailles treaty the airfield became a part of Latvia.
In 1924 the hangars were dismantled, and their steel support beams were used to cover Rigas Central Market pavilion buildings (where they exist to this day).

During the Second World War the airfield was used by the German Sturmgeschwader4.
After the end of World War II it became a first line Soviet Air base, tasked with air defense and nuclear missiles. Vaiņode was home to the 54th Guards Fighter Aviation Regiment (54 Gv IAP), in 1944 equipped with American supplied P-39 Aircobras as part of the 1st Guards IAD. After World War II, 54 Gv IAP reequipped with Sukhoi Su-15 (some of the first Su-15 aircraft ever fielded) in 1967 and the Su-15TM from the 2nd half of the 1970's. Ultimately, the unit flew Su-27 Flankers from the 2nd half of the 1980's until withdrawal from the base in 1993.
It was also home to three R-14 Chusovaya (NATO: SS-5 'Skean') theatre ballistic missiles (Intermediate Range Ballistic Missiles or IRBMs). At 30 meter long and with a range of 13,000 kilometers, launch could take place with 30 mins after a direct order by telephone from the Kremlin. Their reported targets where the Netherlands, Belgium and Luxemburg.
Vaiņode was unique in the Baltic area, because it had two (parallel) paved runways, instead of the more common single runway.

Vaiņode in 2004, with the outlines indicating the locations of runways and taxiways at their original length (Google Earth)

The site has been derelict since 1993, when the USSR (Russia) withdrew after Latvia's independence in 1991. It is located only 4 kilometers from the Lithuanian border. Like the other former Soviet military installations in Latvia, it has been stripped of everything apart from the concrete. The concrete slabs of the remaining and shortened runway (the southern runway was removed in the 1990s) are reported to be in need of repair and are uneven in certain places.
Today, most of the area is a nature reserve and owned by the Vaiņode municipality. A great set of photos taken at Vaiņode airbase can be viewed here (in Lithuanian). 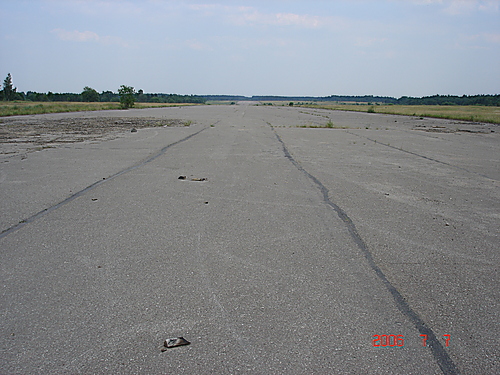 Runway of Vaiņode in July 2006