The Vatla Highway Strip (Estonian: Vatla Varava, also known as the Rihula-Risti Highway strip) was an emergency use airstrip 110 kilometers southwest of Talinn, Estonia.
The airstrip was built to serve as a backup airfield for the Soviet Air Force in case of war. Its runway was oriented East/West with paved dispersals/parkings on both ends; to the north on the east end, on the south side at its west end. 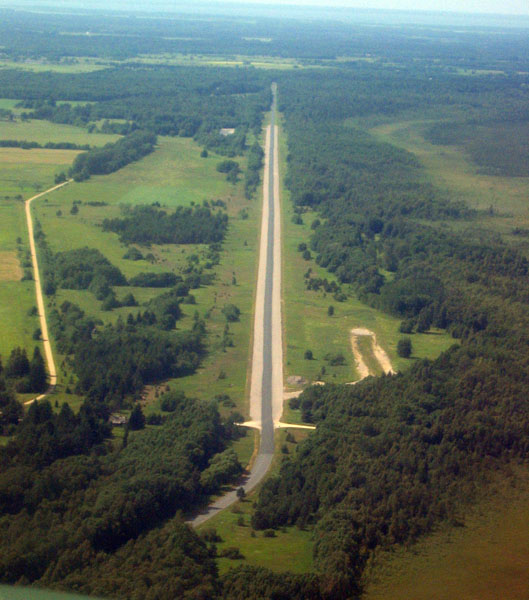 Approach on Vatla from the east in 2005 (original source unknown)

Vatla in 2007 as it could be seen on Google Earth

On 18 May 2012 I received an e-mail from Ervin (last name witheld on request) in Estonia:
"(...) the airfield was used for a couple of times a year - mainly for training purposes.
My family had a summer house right next to the field and it was always an excitement to see the fighter planes training in your front yard.
The sessions usually lasted for a day or two and then the field stood idle again.
The use of the airfield ended with the collapse of Soviet Union.
I can't recollect the exact year when I last saw the aircraft fly there."
In a following e-mail Ervin continued:
"The whole area was isolated by gunmen and our family was only able to see the excercises due to the fact of our windows pointing towards the strip.
We were ordered inside, but they weren't too strict about that.
A gunman was making sure we remained at a safe distance.
The coolest thing I saw were the jets taking off with afterburners and practicing landing.
They had markers which the pilots basically touched upon landing.Talking about precision.
I think I was about 12 years old when they stopped having those practices so my memories are kind of dim (...).
They cleaned the strip with special equipment before each training - I guess it was to avoid having any debris enter the jet engines and inspected basically every inch of the pavement.
The strip goes slightly uphill westwards and the planes usually landed from the east.
The eastern parking was removed sometime before 2005."