Airfield Venlo (Dutch: vliegveld Venlo, German: Fliegerhorst Venlo) was situated just east of Venlo in Limburg, the Netherlands.
As of 1913 the Netherlands Army operated a modest airfield at the border of the Netherlands and Germany.
Between October 1940 and March 1941 the Germans converted the airfield into a major air base, in protection of the Ruhr area. They named it Fliegerhorst Venlo, and it was located on both sides of the pre-war border filling about 1075 hectares. The complex had two runways of 1450 meters and a single runway of 1200 meters. It was equipped with the most modern navigation aids, flight safety measures, about 2000 lights, and a 48kilometer long network of roads connecting hangars, workshops, living quarters, an officers casino, sports fields and tennis courts.
The aircraft stationed at the airfield were modern too: Fliegerhorst Venlo is one of very few airfields in the world to have had an operational rocket powered combat unit (2./JG 400 flying the Me-163). In total Fliegerhorst Venlo was responsible for shooting down 400 Alllied bombers, killing some 2500 men. On the German side 170 were killed in action.

Heinkel He111H22 with V1 of 3./KG as operated from Fliegerhorst Venlo (source).

Between January 1943 and August 1944 between 75 and 100 air raids were executed on the air base, using Mosquito bombers, but it remained operational. On 3 September 1944 a coordinated action by over a hundred RAF bombers the airfield was completely destroyed. 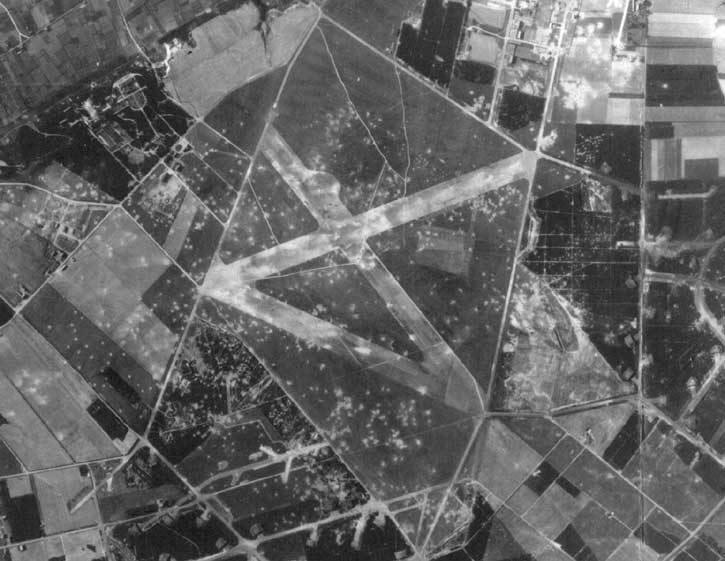 The results of a bombing raid in August 1944 can clearly be seen in this view looking north.

After Operation Market Garden the Luftwaffe left the Fliegerhorst, and the American Air Force took over and called the airfield Y-55 Venlo. They used only one of the runways (30/12), the other two were used for parking. In order to make Venlo suitable for P-47s and B-26s they lengthened the runway during May 1945. The dispersals of the B-26 fleet were on the German side of the airfield. On one or more occasions Churchill and Eisenhower visited the airfield.

Venlo (Y-55) after VE-Day, looking south. the runway extension of 30/12 is clearly visible on the right (between the two roads)
(photo as shown on www.ww2buddies.com)

After the war the Dutch side of the air base was cleared, leaving only the control tower and one damaged hangar. The runway pavement and most of the roads were removed, their bricks being used to repair damaged property in Venlo. On the German side the airbase eventually became part of a complex of the Bundeswehr.
Parallel to the short east-west runway is now a gliderfield. Its resident glider club converted the damaged hangar into a new one, where they keep their aircraft. Most of the terrain is freely accessible, and much of the old infrastructure and bomb craters can still be seen. 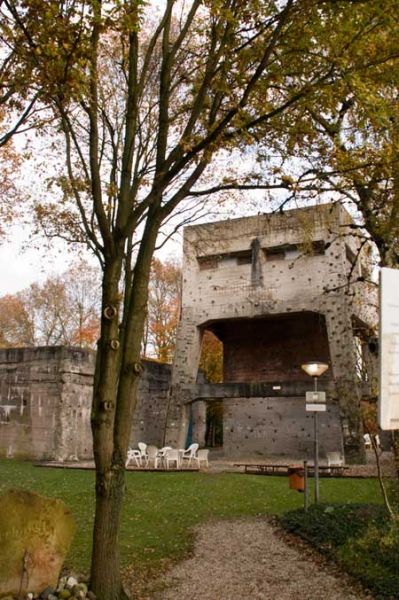 Former German control tower and command center on the west side to the airfield (RonaldV, October 2010)

Mr. Jo Wijnhoven made a nice site about the Fliegerhorst, which, although in Dutch, shows many photos made on both sites of the border, with GPS coordinates.
Another good website (in Germanutch) is the site of the Dutch-German society for the former Fliegerhorst Venlo Foerderverein Ehemaliger Fliegerhorst Venlo 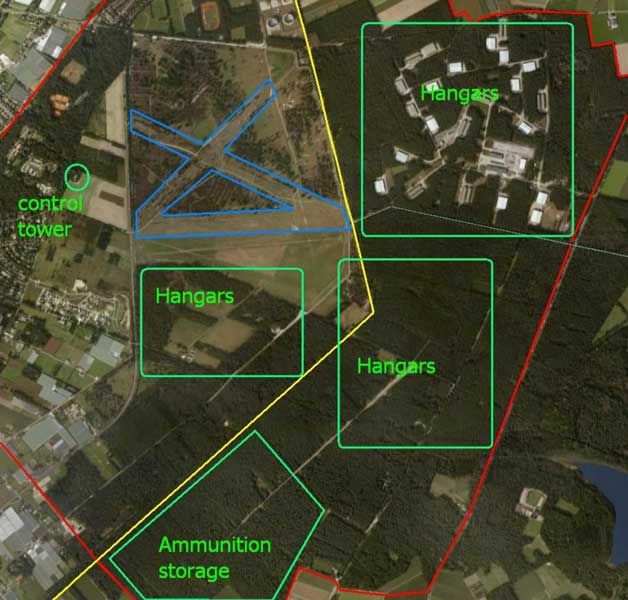