The history of the airfield begain in 1941 when large rural areas had to be found to build heavy bomber airfields in Lincolnshire to meet the ever increasing demand by the RAF. One morning in 1941 farm owner Mr. Bowser was told by surveyors that his land was suitable and by 3pm that same day contractors McAlpine began to clear the site.
The airfield was built in the standard Bomber Command layout, with three runways and a perimeter taxi track. The main runway (09/27) ran along the southern side with the other two runways (03/21 and 16/34) crossing near the north of the site. Thirty six aircraft dispersals were laid down around the perimeter track. Two steel T2 type hangars were built: one on the north side of the airfield and one south of the main runway. A technical/domestic site was situated on the eastern side towards the village of Holton cum Beckering. A bomb storage area was constructed in a slight depression at the south west corner of the airfield.
The airfield was completed in September 1942 and came under control of 1 Group Bomber Command. Wickenby initially opened as a satellite station to RAF Binbrook. That month, 12 Sqn moved to RAF Wickenby from their base at RAF Binbrook with their Wellington Bombers. In November 1942, 12 Sqn became the second squadron in 1 Group to be equiped with the Avro Lancaster. By the end of November their Wellingtons had all been transferred to 199 Sqn. On 24 December 1942 12 Squadron was ready for operations with 24 crews converted to Lancasters. On 12 January they were able to put nine Lancasters in the air as part of a force of 72 medium and heavy bombers which attacked an oil refinery in Essen.
A third hangar (B1 type) was built in 1943, located at the north end of the technical/domestic site. A new dispersed domestic site (#6) was handed over to the RAF in May 1943.
On 7 November 1943 626 Squadron was formed by the expansion of 12 Sqn's C-Flight. As the formation of a new squadron requires extra personnel, a new dispersed housing site was built to the south of the airfield. This site could accommodate both air and ground crews and covered a large area between the villages of Fulnetby and Rand. 626 Sqn flew its first operational missions on 10 November.
In December 1943 RAF Wickenby became 14 Base Substation to RAF Ludford Magna.

One of three sections of a panoramic view at RAF Wickenby that photographed 16 of the crews of 12 and 626 Sqn in front of the control tower in January 1944 (all three sections can be viewed at 626-squadron.co.uk)


The two Wickenby squadrons took part in many major raids on enemy targets and also in Bomber Commands last main operation of the war. Wickenby suffered its last losses on 12 April 1945 when three aircraft failed to return from an attack on an oil refinery in the Luzendorf area of Germany. On 25 April 1945, 14 Lancasters from Wickenby were part of the force which attacked the SS barracks in Berchtesgaden. Following this final mission the two Squadrons took part in Operations Manna (when they dropped food to the Dutch) and Exodus (to help with the repatriation of POWs). The total number of men who died whilst serving at Wickenby during the conflict was 1147.

In September 1945 12 Sqn moved to Binbrook and October 1945 saw 626 Sqn disbanded. Following the departure of the Lancasters, 109 Sqn Mosquitos moved in, but they left in November 1945. All flying at the airfield then ceased.
The next occupant, No 93 Maintenance Unit, collected ordnance from other disused airfields and stored it on the runways awaiting disposal. They remained until 1952 when 92 MU took over, staying until 1956. During 1964-66 the airfield was cleared, and where possible returned to agricultural use. At the same time the road from Snelland to Holton-cum-Beckering, which had been closed to construct the airfield, was reopened.
Unlike most other RAF Stations, RAF Wickenby never had its own Station Badge.


After the RAF had left Wickenby, most of the lands were returned to farming. The northern part of runways 03/21 and 16/34 remained an airfield however, and in 1966 that airfield became the civilian Wickenby Aerodrome.

In 1979, the Wickenby Register (The 12 & 626 Squadron Association) was formed by a small group of aircrew who had served with 12 and 626 Squadron's at Wickenby durinh the war. Over the years they researched the history of the two squadrons and collected together a considerable collection of photographs, Operational Record Books, Flying Log Books and other documents for safe keeping. These documents form the basis of the Wickenby Archive, part of the RAF Wickenby Memorial Collection. The Wickenby Register was also responsible for the building of the Memorial at the gates to Wickenby Aerodrome (and its refurbishment in 2010). The Wickenby Register held their final meet in September 2011 when their members agreed that it would be disbanded and a new committee be set up called "Friends of the Wickenby Archive". The five members of this committee represent the Airfield, the Wickenby Register and the RAF Wickenby Memorial Collection.
The northerly runways are still used today for private flying, along with the Watch Office which serves as a cafe, a club room for the flying schools, aerodrome air traffic control. It is also the home of the RAF Wickenby Collection, which charges no fee (although donations are most welcome!) Flying at Wickenby includes General Aviation, Microlighting, Gyrocopters, Vintage Aircraft and Aerobatics.
The Wickenby Museum was originally set up during the 1990s when the owners of the airfield at that time noticed a great deal of interest being shown in its history. After they left the airfield, the current volunteers took over the Museum and changed the name to the RAF Wickenby Collection. The Collection is made up of memorabilia relating to WWII and post-war Wickenby and can be found in the upstairs of the Watch Office overlooking the two remaining runways.
In the early 21st century, the T2 hangar near the threshold of runway 21 was acquired by the airfield owners. After many years of industrial use it is now, once more, an aircraft hangar.

Wickenby tower in 1994 (Ossington2008, on AirfieldInformationExchange) 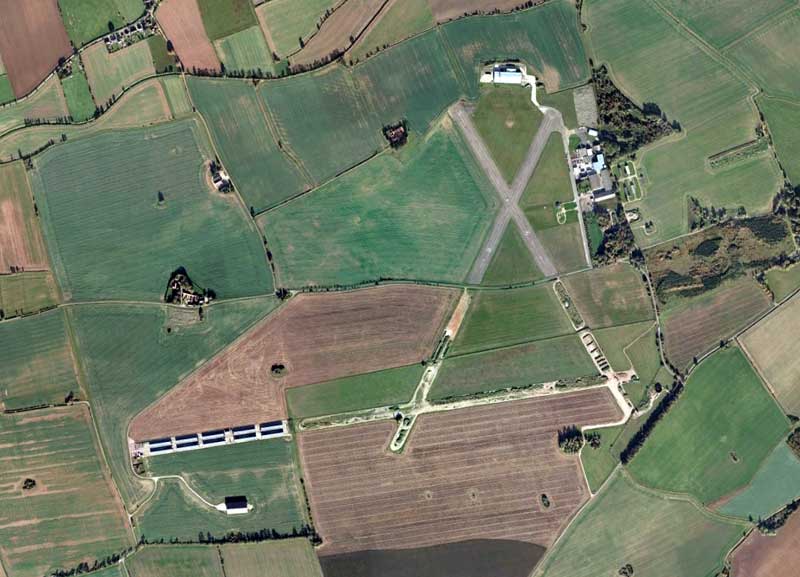 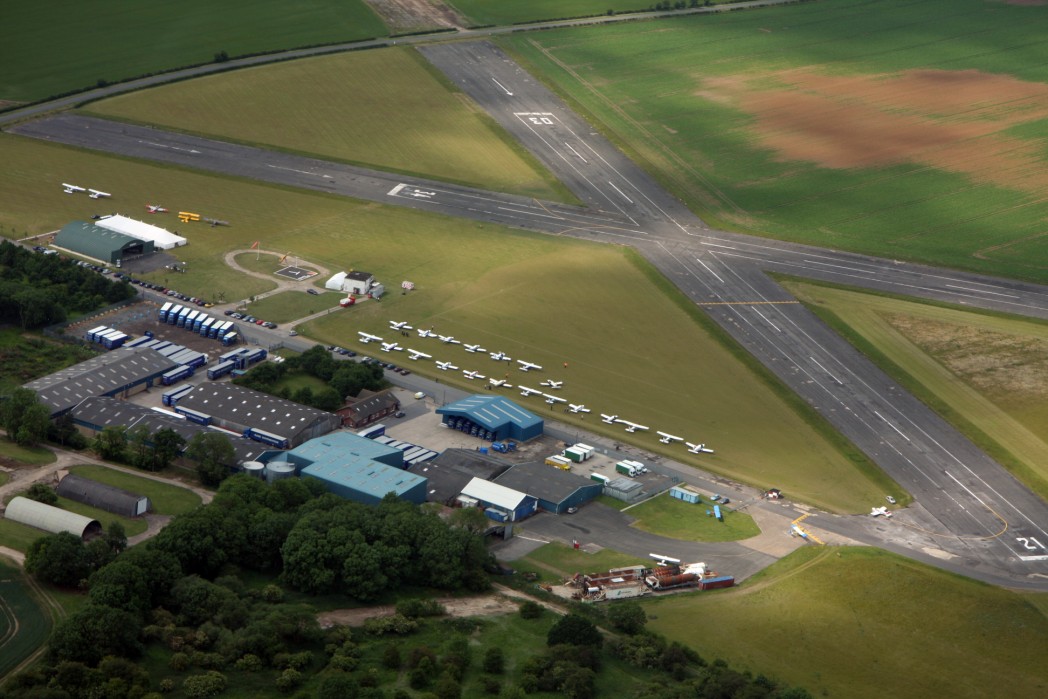 Wickenby Aerodrome viewed from the east in 2011 (dtvmovements.co.uk)
contact us about this airfield