Wigsley airfield (RAF Wigsley, ICAO: EGTW) was an airfield 195 kilometer north of London.
Although its construction began in 1941, land for RAF Wigsley was authorised for requisition already in October 1940. It was to feature three runways, 36 aircraft parkings and three hangars; two T2s on the southeast side and one B1 on the northwest side of the airfield.

Sitemap for Wigsley, as found on harby.org.uk

The airfield opened in February 1942 as a satellite for RAF Swinderby. First user of the base was 455 Sqn (RAAF) flying Handley Page Hampdens (medium bombers). The Australians only stayed until April 1942, but in the months they flew from Wigsley they flew mine laying sorties ('Gardening', as it was known) over the North Sea, and ran leaflet drops over France ('Nickel' Raids). Seven Hampdens failed to return from operations and four others were lost in crashes while flying from Wigsley. They moved on to Coastal Command at RAF Leuchars.

A new unit was formed at the airfield in May 1942, 1654 HCU (Heavy Conversion Unit). This type of unit was responsible for the final training of heavy bomber crews before they were assigned to an operational squadron. In March 1943 Wigsley became a satellite to RAF Swinderby.
Initially, Wigsley flew Lancasters (8 examples) and Manchesters (8 examples), becoming all Lancaster by April 1943. But as they were required for front line service (four Lancasters were lost on operations when the unit was called upon to assist in the bombing campaign), the Lancasters had been moved to operational bases by November 1943 and Wigsley received Stirling IIIs as replacements. As an HCU with less than ideal aircraft, there were many crashes. The Manchesters in particular suffered heavy losses.
In March 1944 the station transferred to 7 Group, but its function remained unchanged. 1654 HCU converted back to Lancasters in early 1945. The unit left in September 1945 to RAF Woolfox Lodge to be disbanded. In total, operations from Wigsley had cost 17 aircraft missing or crashed in the UK, 13 Handley-Page Hampdens and the four Lancasters and 28 Aircrew Holding Unit was formed in September of that year at RAF Wigsley to coordinate the return of RAF aircrew to their respective origins (many aircrew came from all over the British Commonwealth). 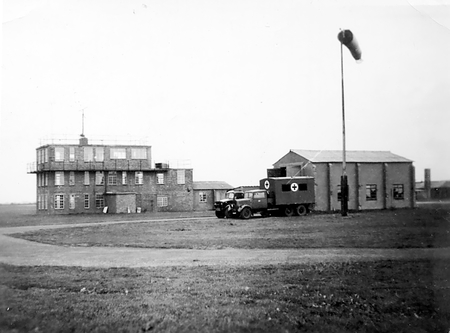 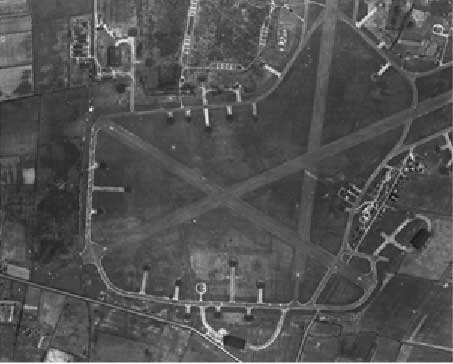 Wigsley after flying ended in september 1945 (RAF, via telegraph.co.uk)

This latter function ceased a year later. Wiglsey was placed on Care & Maintenance in 1946, but reactivated again in the 1950s as a satellite for RAF Swinderby, but this time as a Relief Landing Ground (RLG) for the Vampires and Meteors of RAF Swinderby's 8 FTS. It was frequently used by training aircraft and so, with a small holding party, the airfield continued to function for `circuits and bumps’ until 1 April 1958. The base finally closed on 1 July 1958. The runways remained, as did those of many other disused bases in the area, and were used for learner drivers, model aeroplanes and the occasional 'real' aircraft. The base was sold off by the MoD in the 1960s and began to see demolition from the 1970s.

Much of the infrastructure, including the runways, has now been demolished and torn up, but the two subsidiary runways can be easily identified.

The Watch Office (Control Tower) still stands in semi-derelict condition - it is this building that most people now associate with RAF Wigsley, as it dominates the bleak road crossing the former aerodrome. The tower is of a very unusual design, comprising three storeys. Indeed, it is believed that no other RAF base had a tower similar to this one. Other buildings can still be found by looking a little more closely, the 'Ops' building, numerous air raid shelters, toilets, de-contamination block and many more. RAF Wigsley never was a famous station, but its role in training the bomber crews for action was vitally important and still pretty dangerous. It still leaves its mark on the surrounding countryside and in the memories of the local residents to this day. 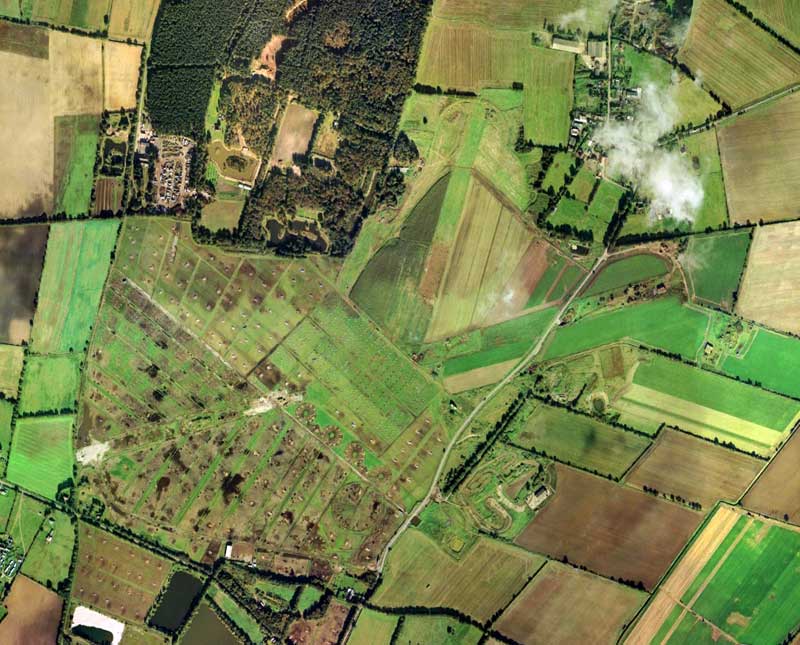 The remains of Wigsley in 2001. With a little effort, the tree runways were still recognisable (Google Earth). 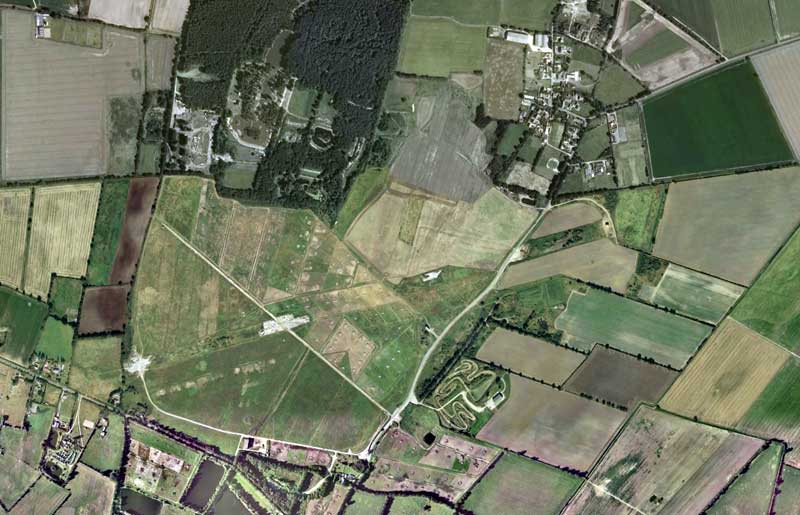 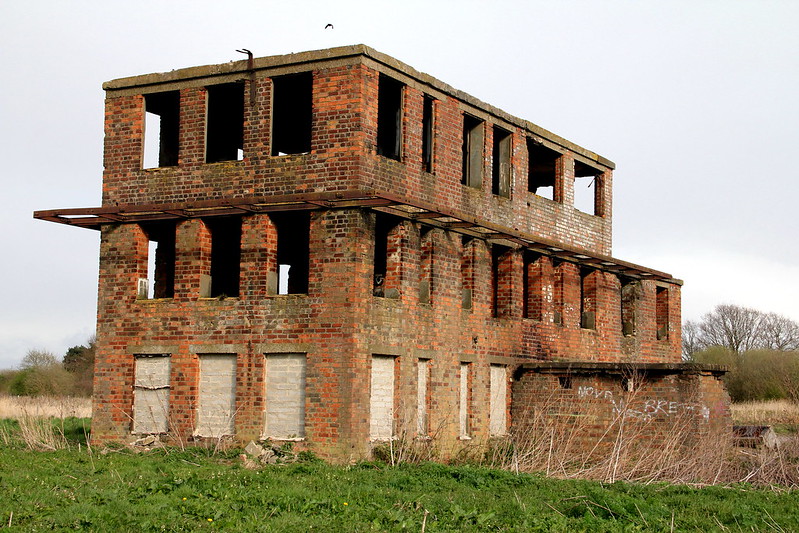