Zaton airfield (Croat: Aerodrom Zaton Šepurin, also known as Zadar Zaton, Zaton Šepurin Training Air Base or simply Šepurin Training Base, ICAO LD57) was an airfield 195km southwest of Zagreb.
>The airfield was built by the Jugoslav National Army (JNA) during the Cold War. During the War of Independence in the 1990s, the airfield was used by Croatia as a special forces training site. The site was vacated by the Croat forces in 1999 and the Ministry of Defense gave the site up in 2008.

Zaton airfield, the platform and its runway in 2013 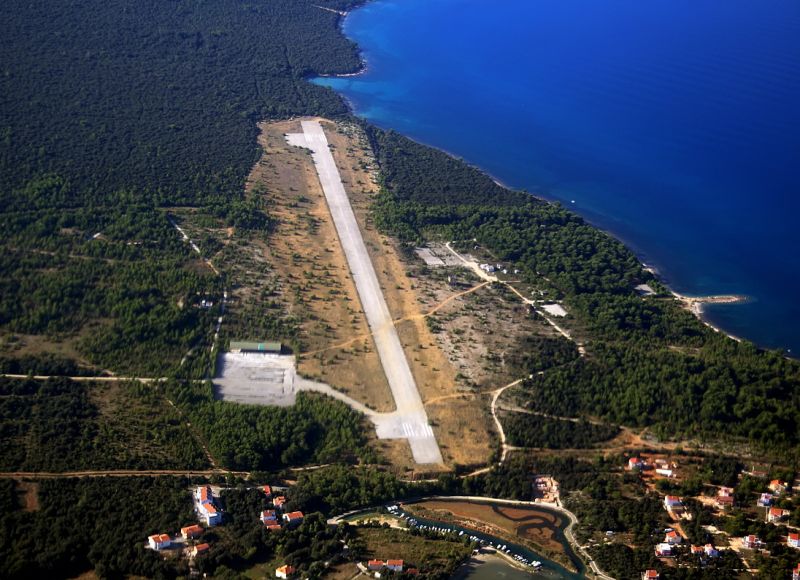 The airfield as uploaded to Wikimapia in 2015.

The area, one million square meters on one of the most attractive spots on the Adriatic coast was handed over to the State's real estate agency DUUDI. It appears that nobody at that agency really cared, or had even ever been there. In the early 2000's Šepurin was considered to be one of the most promising facilitities for redevelopment by the Ministry of Defense. In a provincial plan the military airport was to be transformed into a recreational/GA airport, as once prefered by the once powerful and mighty united companies who operated Zadar airport. It was not to be. Even though the old JNA facility was one of the best spots on the Adriatic (JNA had a habit of confiscating the best spots during the Socialist years) lack of interest from and action by DUDI meant it was in a severely deteriorated condition within only a few years.

What was left of Šepurin by 2020 was beyond sad. Broken glass, garbage, destruction, neglected woods: it was like somebody was awaiting a fire that will burn off all the government problems that are related to the site. Still, it has been used for training of Croat Bell OH-58D Kiowa helicopters in recent years. The runway is not suitable for fixed wing aviation though: debris on the edges of the runway prevent safe use of the airfield.